First, some photos of the Horseshoe Meadows road near Lone Pine, California that I found on the cutting room floor. 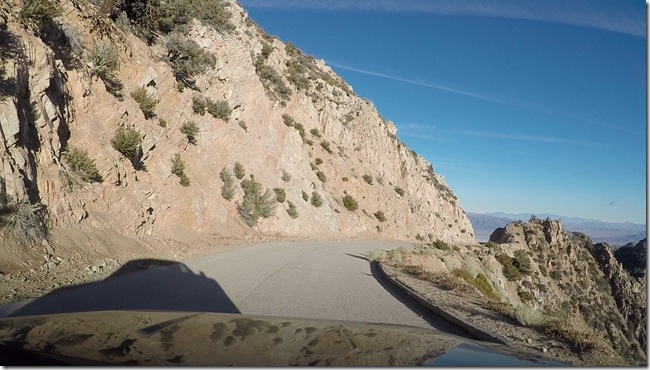 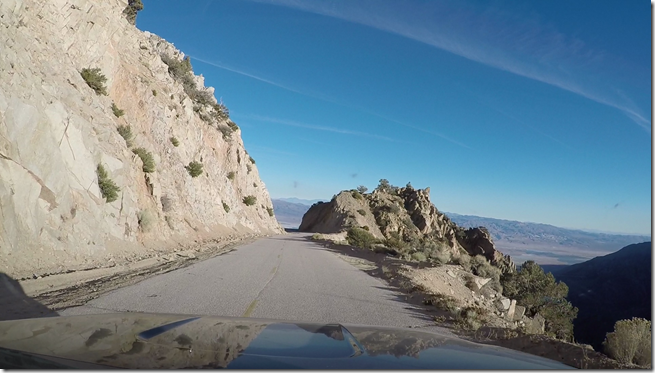 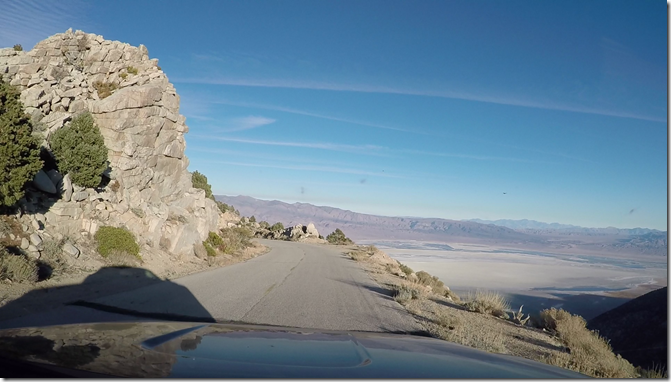 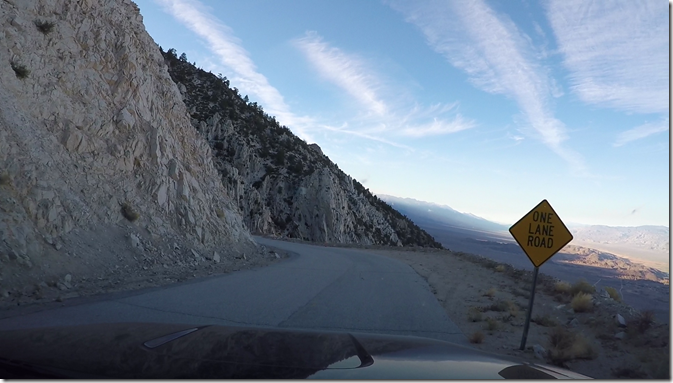 Since I’m still waiting for my membership in the Procrastinators Club to be approved, I thought I would get a few things out of the way.  First, I re-installed that slippery bit of slide seal that keeps trying to escape.  Only time and a few rough miles will tell if this repair was more successful than last time.

I had a slide actuator causing trouble several years ago, so I took the rig to RV Lifestyles in Quartzsite, where they determined that it ‘didn’t work’ and told me that I would need a new one.  Before I threw out the old one that time, I took it apart myself and found that it was simply a case of one of the brushes being stuck.  It was fixed with a few well-aimed blows from my poundometer (hammer).  Or as I think it was Shadowmoss commented – ‘percussive maintenance’!  So anyway, the slide had worked good ever since – till this fall, when all sorts of issues have tested my patience and bank account.  For the last few weeks I have been using a hand crank to move the slide in and out – which could actually be considered good exercise for those who don’t mind laying on your back in the mud/dust/thorns, cow poop, cranking 253 times with a shot of gravel in the mouth/ears/eyes/nose every time you bump the wrong spot.  At long last I could not come up with any more excuses not to have a look at it.  Once again, I cut the wires and moved it into the operating room – otherwise known as the kitchen table – for open gear surgery.  While most of the parts seemed to be in excellent shape, it appeared that some water had seeped in to a few areas, creating some rust and corrosion.  I cleaned all of that up as well as I could, but that same little brush as before was going to be a problem, and percussive maintenance was not going to be enough this time.  The poor little spring was either too weak or had rusted away, and was not doing the job.  It was about the same size as the spring in a ball-point pen, but try as I might, I could not find a way to get a new spring in there.  But it needed something to hold the brush in place…. 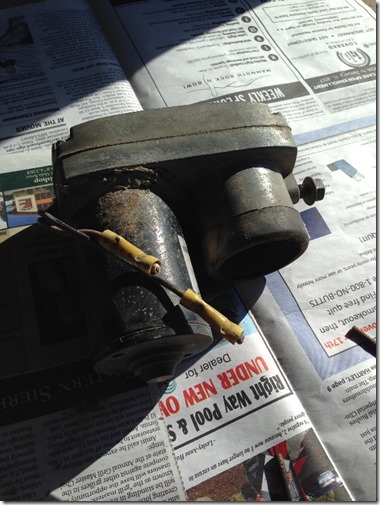 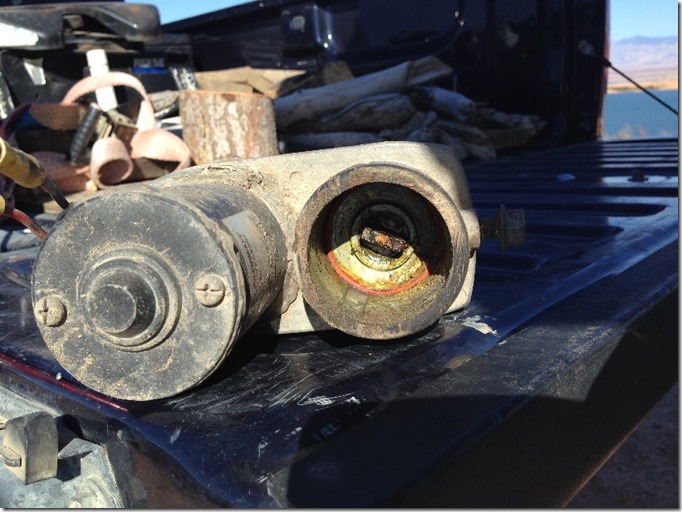 Hmmm?  After a quick look around, I found a chunk of dried silicone sealant, left laying around from the slide seal project.  Deftly slicing a perfectly sized piece, it was inserted in the spring channel, and it worked perfectly.  I put it all back together again; and then did it a second time because I thought it might work better if I returned ALL (!) the parts to their rightful spots this time!   And – Bonus …  Years ago when I had finished the maintenance, one of the wires was not long enough, unless I wired it backwards – which I did.  So this time was the perfect opportunity to add some new wiring and get it right!  So now, confusing as it might be, pressing the ‘in’ button causes the slide to go ‘in’, and  - well, you get the idea.  And the whole thing sounds much healthier than it has in years!  Keep your fingers crossed.

Hiking along the shoreline of this section of Lake Mead showed there were numerous little sheltered bays that were just begging to be explored.  So – with a couple of huffs and puffs of the air pump, the kayak was inflated and exploration was conducted. 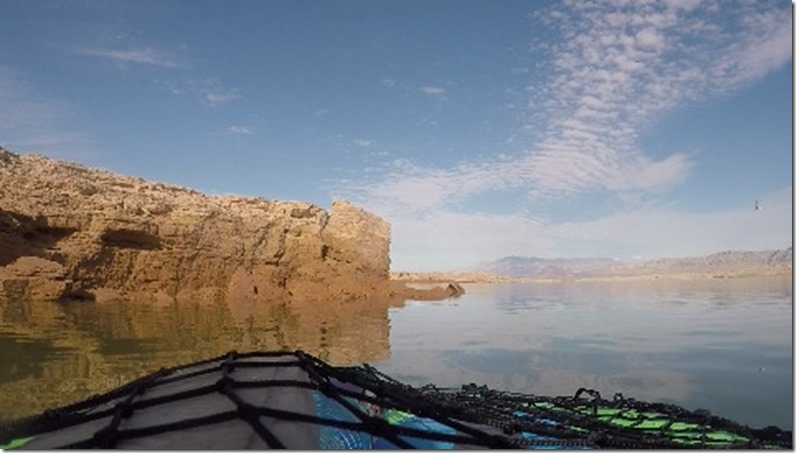 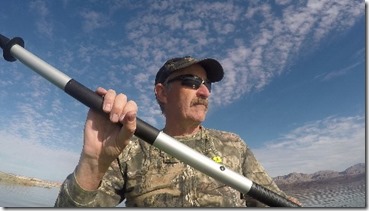 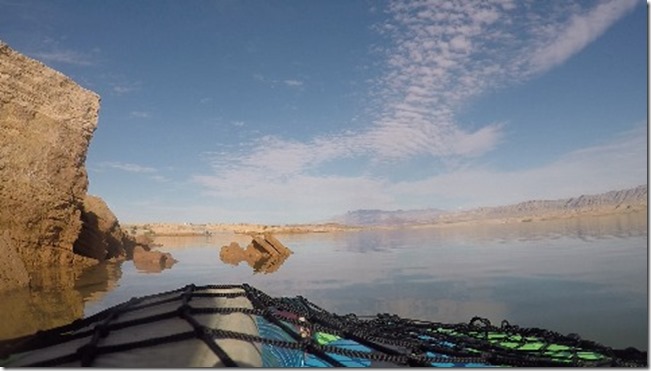 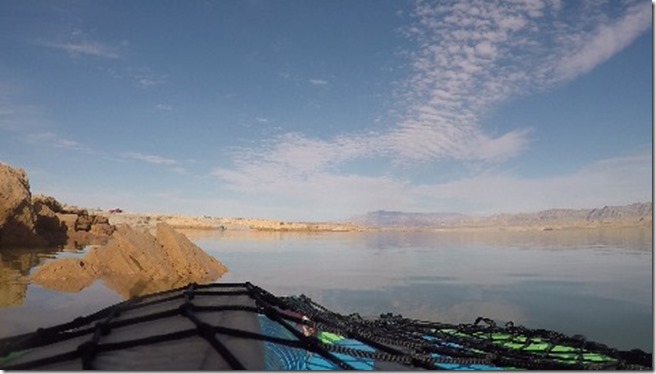 Looking around my neighbourhood, there were a few other rigs in sight, one of which had a website emblazoned across the front, somewhat reminiscent of the Bayfield Bunch!

It was DisruptingOrdinary.com  A quick check online found the website and quite a number of videos – some of which were done at that exact location!  I sent them a quick note and the next day Laurie & Scott stopped by for a visit.  They are full-timers from Colorado, and are traveling with their two cats.  Check out their website and Facebook.  Very nice folks.

I finally had a chance to burn some of that lovely driftwood that I had collected on the beach in California.  Since I was camped in the same spot I have used several times before, I recalled sharing this fire on the lakeshore with Don & Donna as well as John & Nicole, from Alberta and BC respectively.

Water levels are down yet again in Lake Mead.  Last time I was down there before the road was closed, water was not even visible from the boat launch at Overton Beach.  I drove down to nearby Echo Bay to have a look around.  They have had to move the launch area a long ways to reach the water. 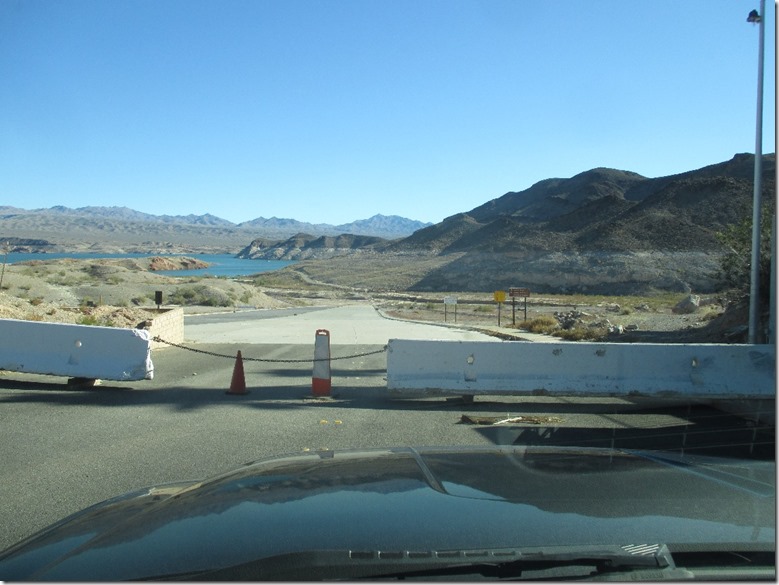 Those are not barns in the trees.  They are what used to be floating, covered docks.  Behind them is the end of the original launch ramp, now high and dry.  And at one time the water level was right up the the buildings in the distant background.  All those trees have grown up since the water levels dropped. 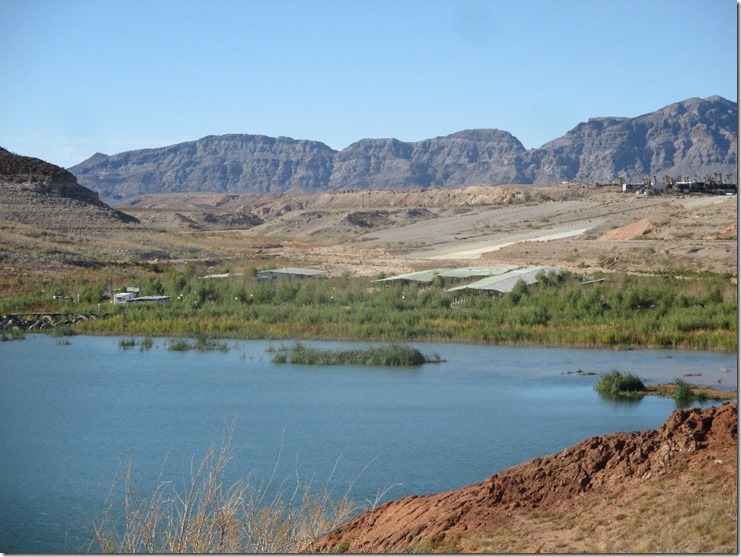 Of course, all the area where we now camp was all submerged a few decades ago, as evidenced by all the ‘sea shells’ scattered in the gravel.

For the first time, I was able to walk all the way out to the point of land in the photo behind Hailey. 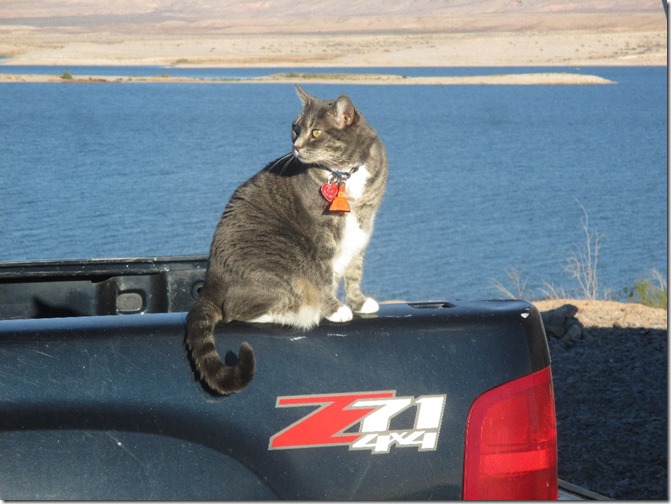 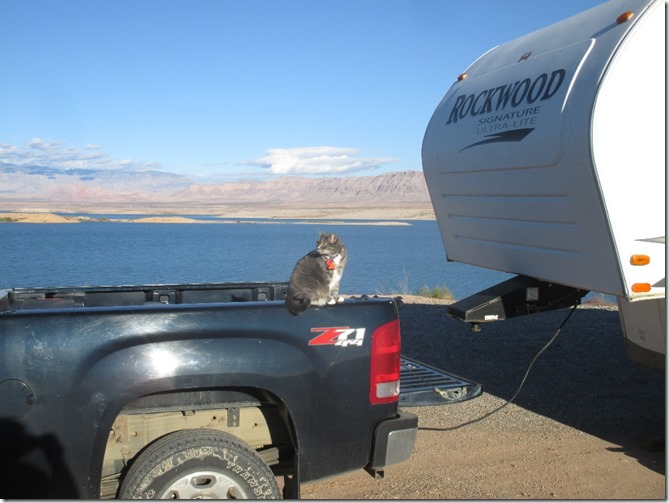 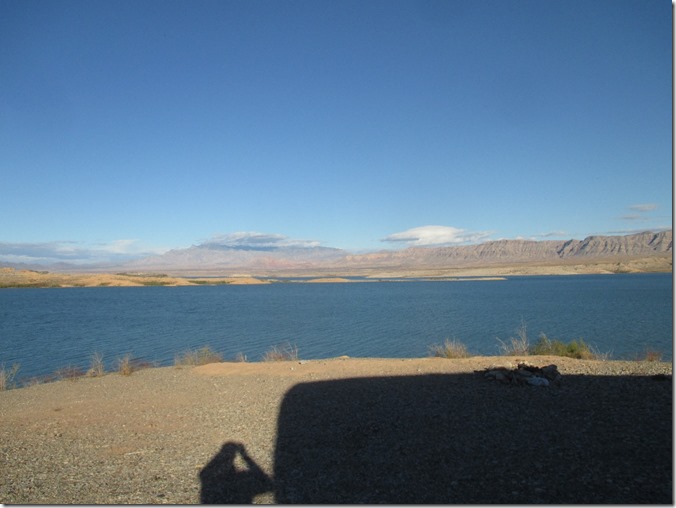 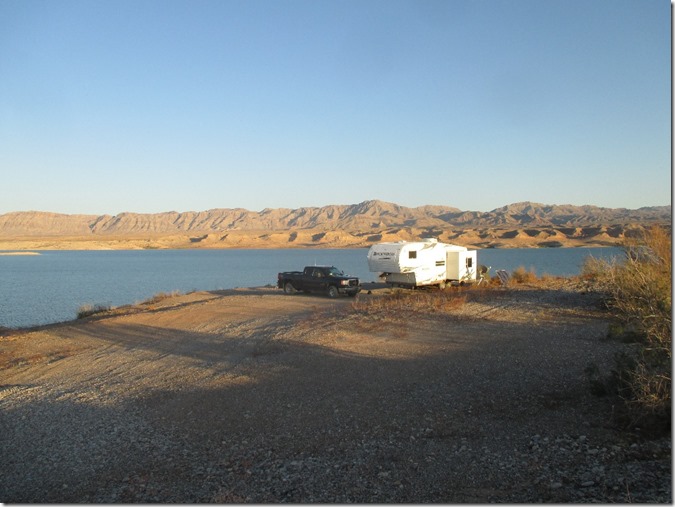 In other news, the BayfieldBunch  have completed the long trek from Ontario, to Arizona – via Florida!  Hope to see them out on the boondocking circuit before too long.  John & Brenda have migrated from Dogpound north to Dogpound south near Maricopa, where Blue II waits to take them on trail rides near and far.  A confidential source has informed me that inactive blogger Wandering Willy is once again on the move south, seeing things with brand new eyes.  I have to be nice to him for a while however, as he is bringing along some satellite internet parts that might get my system back up and running again.  I think Jean & Skip are still in BC, awaiting the right time to come south and begin to thaw out.  Ernie, Deb and Moki are eagerly waiting in Saskatchewan till they can head south, as are Don & Donna in Alberta, and John, Nicole, and Nibbs in BC.  There’s no shortage of boondocking space here, so come on down!