Glad to report that after having several rodents a day invading the rig for a while, either the moon phase or the price of gold (or perhaps the can of expanding foam I used), seems to have (knock on wood) completely eliminated the invading forces!  I never did try the two different types of spray deterrent I bought, nor put any more lights underneath at night.  And I never had to set the big rat trap now in my arsenal.

There were a few consecutive cloudy days at Borrego Springs, so I took advantage of that to schedule the monthly exercise program for the Honda generator – just so the gas doesn’t get stale or it fails to start after too much inactivity.

After a few days at Borrego, John & Nicole showed up and proceeded to cycle hundreds of kilometers on roads in the area – including some incredible hills and mountain passes.  I keep my bike safely in the back seat of my truck 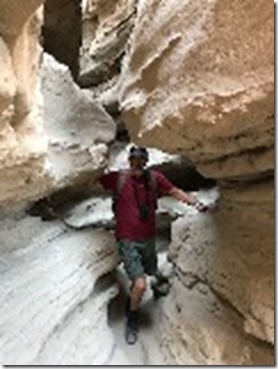 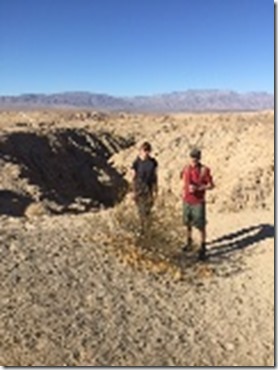 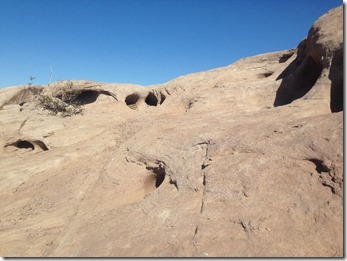 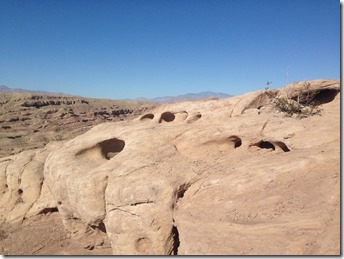 We went for a hike and scramble through the nearby slot canyon, and watched some jeeps slide down a steep trail into the canyon. We found some neat arches as well as some small wind caves.

I went for an exploratory mission one day down the Old Kane Springs Road.  There were some unique dwellings out in the desert, but no tempting camp spots. 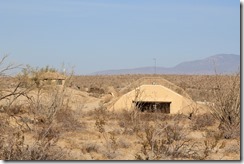 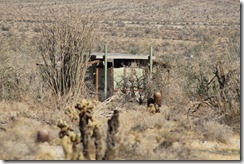 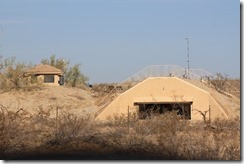 Another day, I was pleasantly surprised to find the trail down the San Felipe wash from Texas Dip was reasonably smooth, and I’d be tempted to camp down there sometime, but most of it had no cell coverage with AT&T, but I did find a spot at the junction of Slot Rd where the download speeds on AT&T via my Mobley were 20 Mbps download speeds!  Hmmm, I wonder if I could drag the 5th out here some time!  Continued following the road and headed back to the highway via Hawk Canyon and the Buttes Pass road.

Hawk Canyon looks like a neat place to camp, with about a half dozen available spots.  It would be a bit tight on any sort of big rig however. 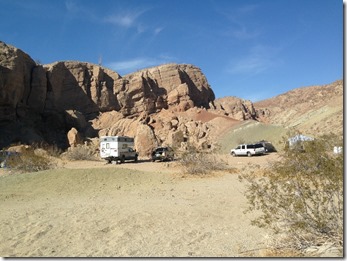 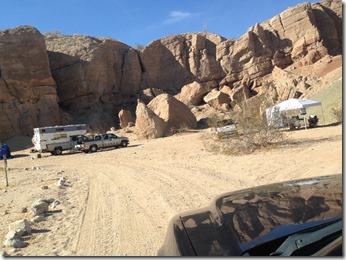 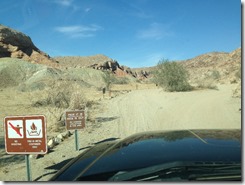 I ended that expedition with a drive up Goat Trail for a look around. 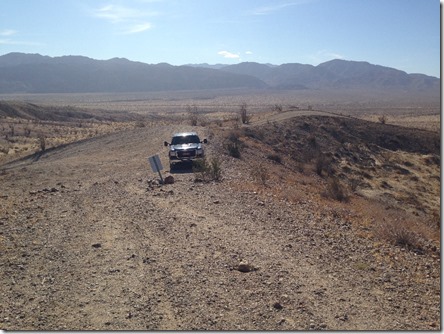 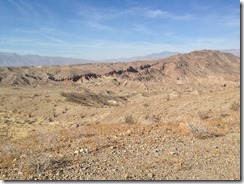 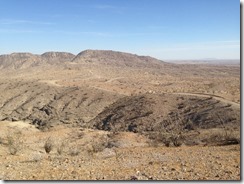 One day it was time for the annual excursion out to the Blair Valley and the Marshal South homestead on Ghost mtn. 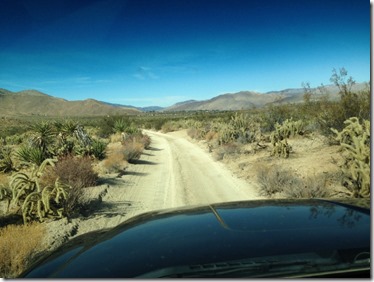 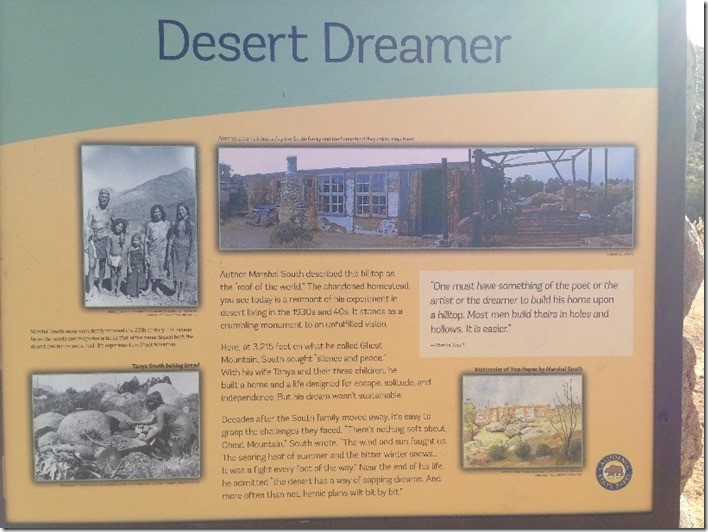 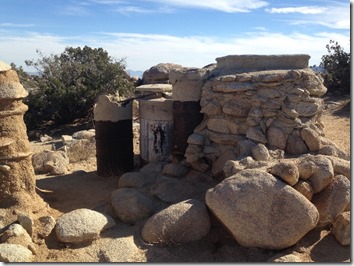 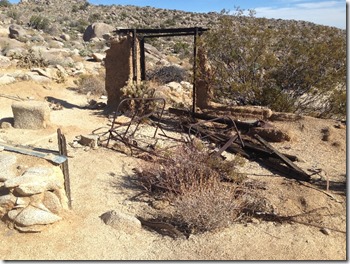 I also drove further out past the Blair Valley as far as the Butterfield Ranch area, exploring every side road along the way.  Several of them had great potential for a van or truck camper, but not very suitable for something bigger.  It’s tempting to bring the truck camper down here again some time …

On the return from the Blair Valley I took the longer route through Ranchita, which would bring me back into Borrego down the Montezuma pass road with great views over the valley as you go down the long descent to the valley bottom.

Turns out, John & Nicole wanted to go to Blair valley the next day, so we did it again, but this time we also checked the Potreros and pictographs.  While there, we were momentarily shocked when a huge bird weighing several tons and travelling hundreds of miles an hour passed silently right over our heads – only to be followed immediately by an ear-splitting, ground shaking blast of sound.  And two seconds later, the whole scenario was repeated again!  All I could tell was that they were military jets with a single tail fin, on edge going through the canyon.  No photo, of course.  For some great jet photos, check out John’s A-10 photos  from Why, here -  John & Brenda

I like to do the Palm Canyon hike up behind the campground at least once per Borrego visit, so managed to find time to do that one again. 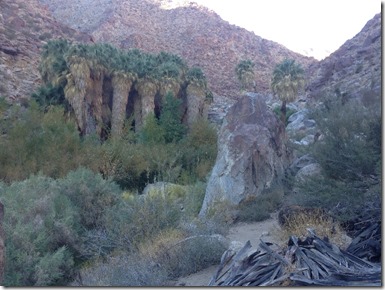 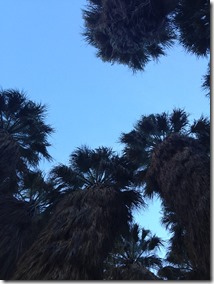 Water was the lowest in the creek that I have ever seen. 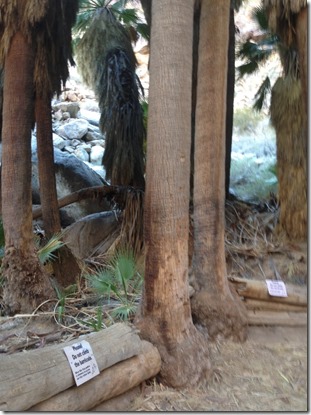 After a while at Borrego, I put new batteries in the calendar and discovered that we had been there a few weeks.  Hailey was patient, but probably wasn’t enjoying all the time being on leash because of all the cholla cactus in the area.  So it was about time to hitch up and head down the road.

We decided to head over almost to Arizona, to the Ogilby Rd boondocking area as rumour had it that both phantom bloggers Wandering Willy and Jean & Skip might be in the area.  We’d heard that there was a lot of construction on I-8 between El Centro and Yuma, so chose the quieter route from Brawley up 78 to the northern end of Ogilby Rd. 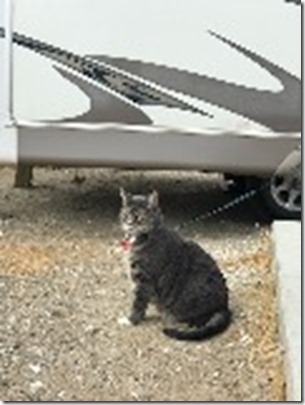 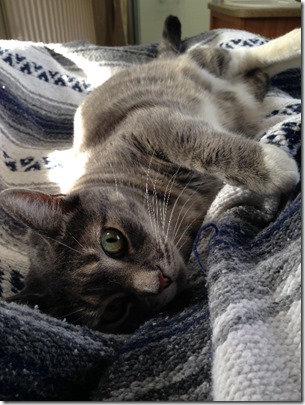 Sure enough, Wandering Willy was in his usual spot, but sporting a brand new trailer with 2 doors and a power awning!  Just up the wash was Jean & Skip, also in a different Class A, with a different toad!

Strangely, there is a single ‘no camping’ sign at one of the main entrances to the most common boondocking area, but no other signs anywhere.  The west side of the road has always been a no camping area, but never on the east side.  It’s a bit of a mystery, but BLM rangers came in one day and visited a couple of RV’s in the area, who subsequently moved.  But one large group only moved a 1/4 mile away and set up again!  Other RV’s in the same general area were not contacted.  At the same time, trucks have been arriving seven days a week and dropping off huge loads of power poles nearby.  I’m assuming that a new power line will soon be running through the area, and only certain rigs were asked to move because they might be in the way?  Only time will tell.  We could always ask someone who knows, but where’s the fun in that?  In the meantime, it keeps Wandering Willy entertained, wondering what day or time he will be kicked out

Meanwhile, out on the I-8, west of Yuma the construction continues and the lanes and barricades change daily.  Generally there is one lane traffic in each direction on the interstate, but entry and exit ramps are closed in many cases.  For example, you can exit onto Ogilby road if you are eastbound, but not westbound.  If you are westbound, you’ll have to go up to the next interchange west and come back.  Entry and exit onto Sidewinder road had been affected, but heading down to Algodones appears to be unaffected at this time.  Access to the ‘California Customs’ varies by the day.

Hailey is enjoying the freedom without leash or harness here, but wants to come inside if it is too windy.  We also have a mystery nighttime wildlife visitor who leaves droppings on our outdoor mats.  Cameras are watching for the next visit.

Hailey and I will likely be moving a bit closer to Yuma in the next few days in anticipation of Christmas dinner invitations that may be coming our way.

Loving the AT&T high speed unlimited data internet with the Mobley device for $20/mo.  Too bad the plan is no longer available for new customers.

Merry Christmas to one and all! 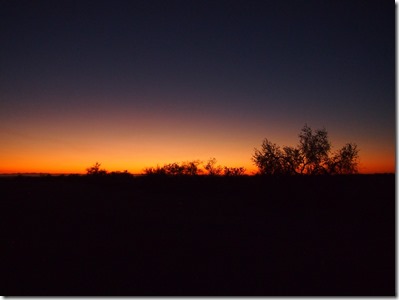 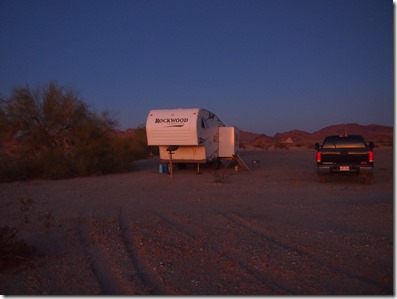 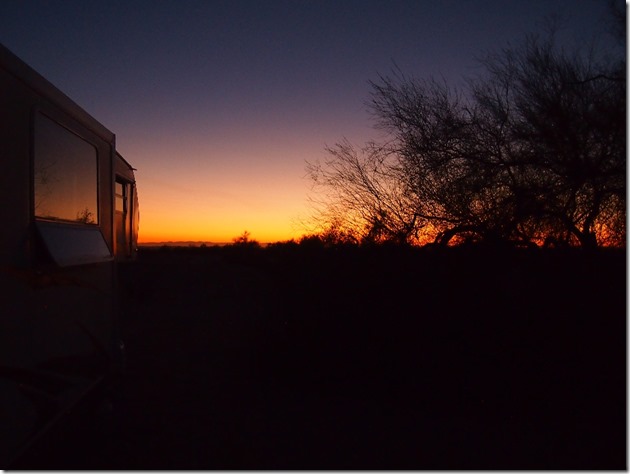