Life and Death on the water!

After leaving the northern end of Vancouver island, and seeing fresh snow on the sides of the road in the high places, we needed a place to camp again.  With lots of available options out around Campbell Lake, that's where we headed.  For the first night back we ended up in the same spot as our very first night on Campbell Lake two weeks earlier, Burnt Beach rec site.
It is a beautiful spot, and would better be enjoyed in summer time when shade is desirable, but with no generator along for this trip, solar exposure was a more important criteria.  So in the morning after we had our kibble and coffee, we started to check some nearby alternates.
Gosling Bay rec site is only a few km down the shore, but the prime sites were occupied :-(.  But just down the road from it was Petite Gosling, that really only has one site, on a small point in the lake, and there was no one there! 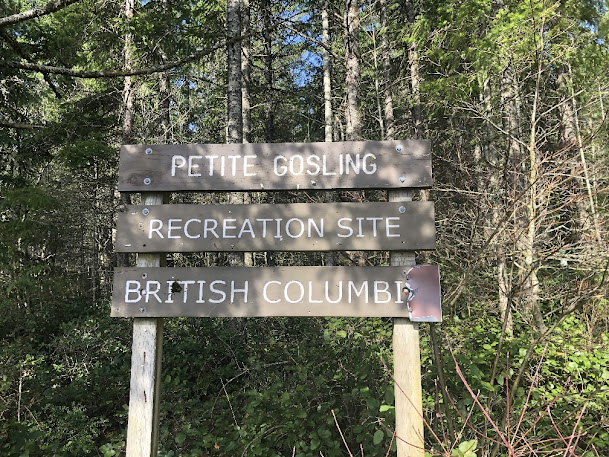 We swooped right in, got kinda level, confirmed some decent data speeds with the MIMO antenna - good to go. 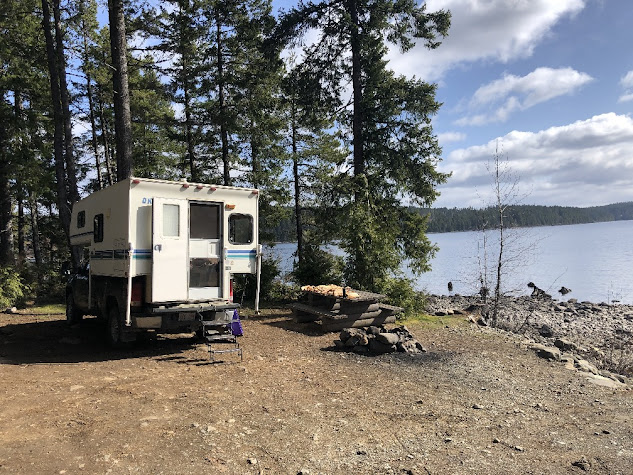 The sun was shining, so the damp firewood collected earlier from the beach at Elk Bay was spread out on the table to dry.  There were quite a few painted rocks on the beach. 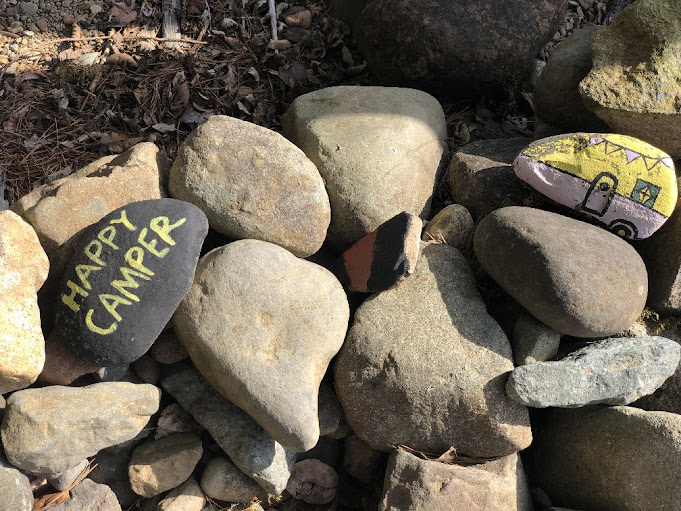 While I'm not normally a fan of painting the natural environment, these creations were certainly done with care - even if some of them were advertising! 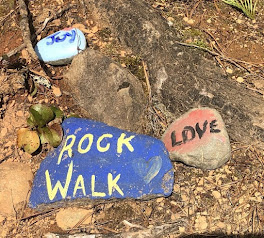 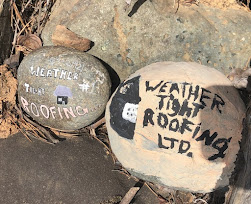 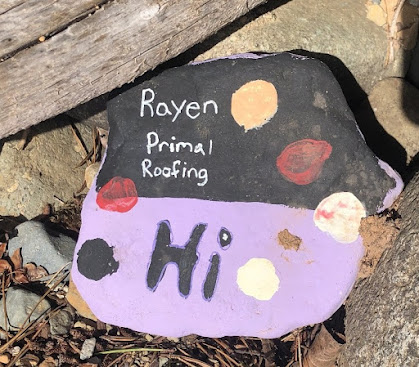 Ms Hailey was keen to get out and check out the bush and the beach. 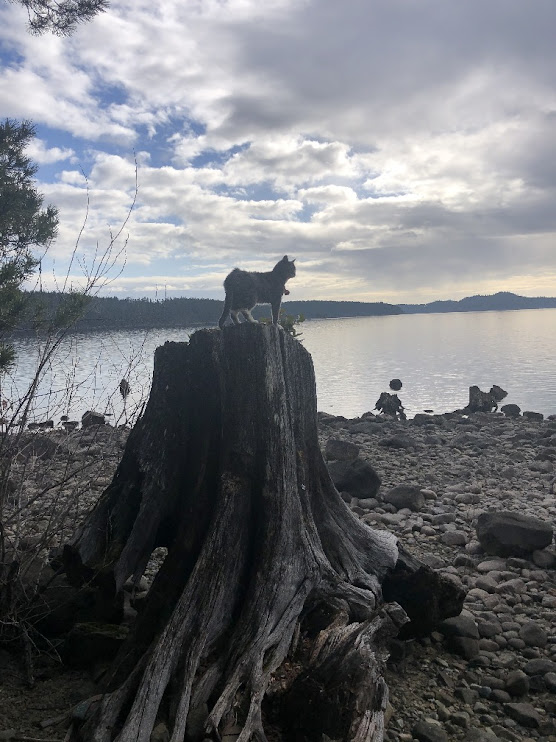 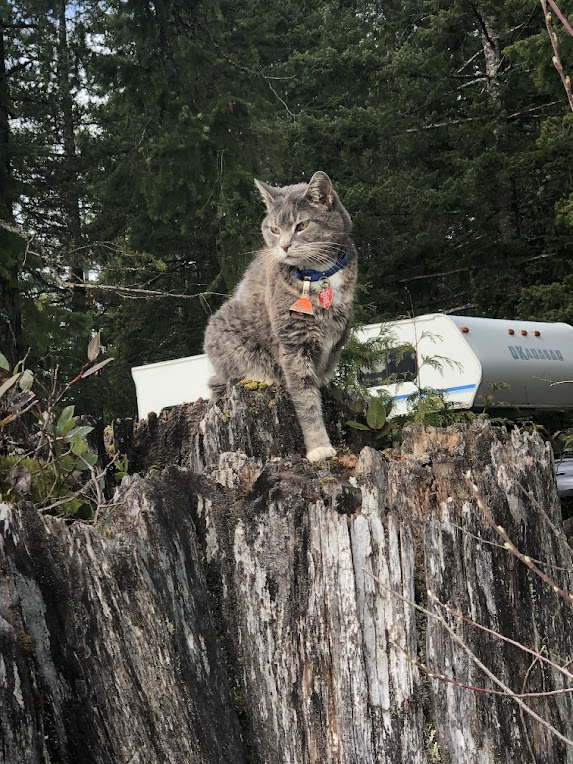 She always wears her collar when she goes out, and I hang a bell on it so I can keep track of her.  She never ever takes off, and always knows where 'home' is parked, but that doesn't stop me from multiple panics when I can't see her, or hear her as she stalks some mouse under a bush!
From out on this point, I could also see a camper down the shore at Gosling Bay site, and looking the other direction, someone was in the Fir Grove Rec site.  While sipping my coffee and watching Hailey, I noticed a Bald Eagle just offshore making several dives at the same spot on the water.  I thought perhaps there was a fish there that it was trying to catch?  Then I realized it was a small duck it was harassing.  The eagle would swoop down, and at the last moment the duck would dive, the eagle would miss, and the duck would pop back up again!  Clearly, it was a dabbling duck, not capable of staying under water and swimming away.

The eagle would fly up, only 10 or 15 feet, then dive again at the duck, over and over.  I wondered how long this standoff could go on?  Then, the duck made a break for it, flying away over the water as fast as it could.

The eagle put it in overdrive, and went right after it in an aerial chase!  Just when I thought the eagle would catch it, the duck dived right out of the air, straight under water.  Then the same swoop - dive - swoop - dive scenario resumed.  I thought it might go on for most of the day, till the duck's worst nightmare happened.  A second Bald Eagle showed up.  Now, the two eagles would alternate their dives, and clearly the second one would try to be there just when the duck popped up again, unable to stay submerged.

Soon, the inevitable happened.  One eagle crashed into the water and stayed there, wings spread out a bit, floating, but not moving.  I assumed he had the duck in his grasp.
But then, just when I thought of running for my decent camera, I realized that Hailey was AWOL!  While she was likely nearby, just hiding under a bush or in the trees, I didn't want her spotted by these eagles who were clearly in hunting mode!  She would be safe if she stayed hidden, but what if she ran back to the camper that was parked out in the open!  So I was unable to keep a good eye on the life and death struggle in the water, but I did see the eagle in the water start to 'swim' with its wings in the direction of shore.
I finally located Hailey nearby, hiding, and secured her back in the camper.  But I never found out what had really happened out on the water!  But immediately afterwards, I saw both eagles flying around.  IF they had caught the duck, I assume that one or both would be feeding on it now, or at least have taken it back to their nest, but they were both still flying.  Also, I did see A duck on the water in that general location, but the eagles were not bothering it - which doesn't make sense to me.  If they caught it, they should be eating it.  If they didn't they should still be trying to catch it.  Unfortunately, the video I have was taken at a distance with the iphone in the early phase of the chase.  I was too concerned about Hailey becoming eagle food that I never did get my good camera or find out the final outcome! 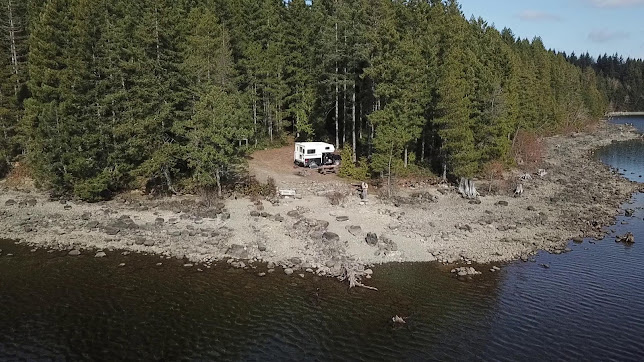 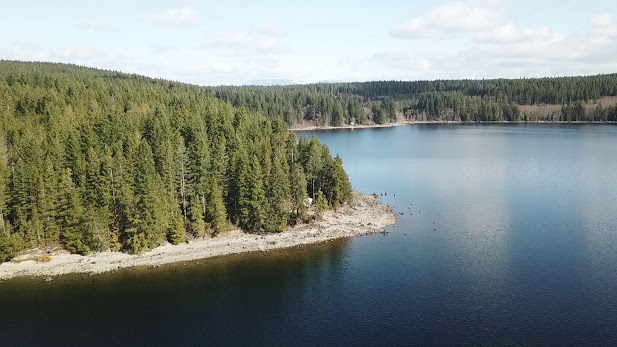 Just down the shoreline 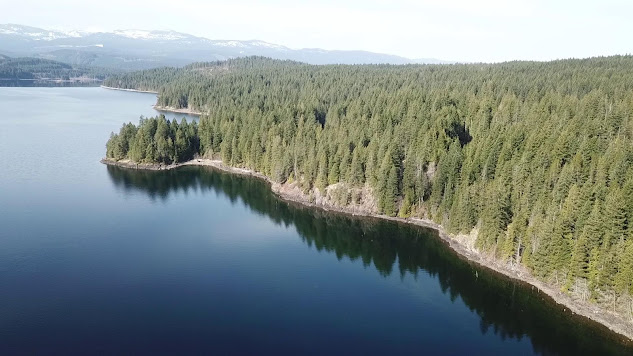 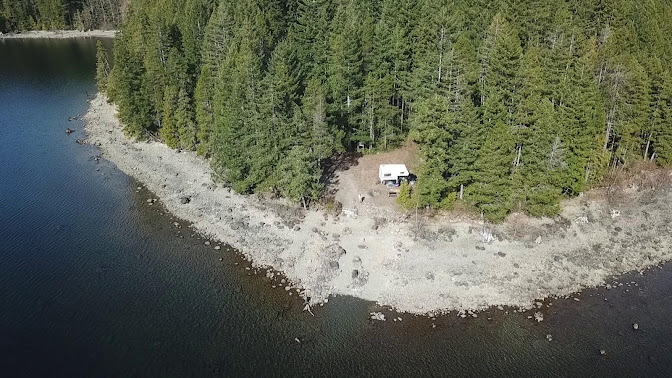 I think we spent three days there enjoying the peace, quiet, views, and partly sunny days.  Then it was time to move on, for points unknown.  Moving southward down the coast we came across Miracle Beach provincial park, with a huge beach, and a nice looking campground. 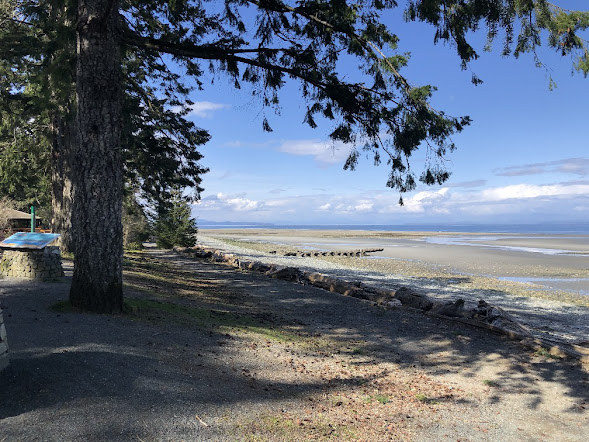 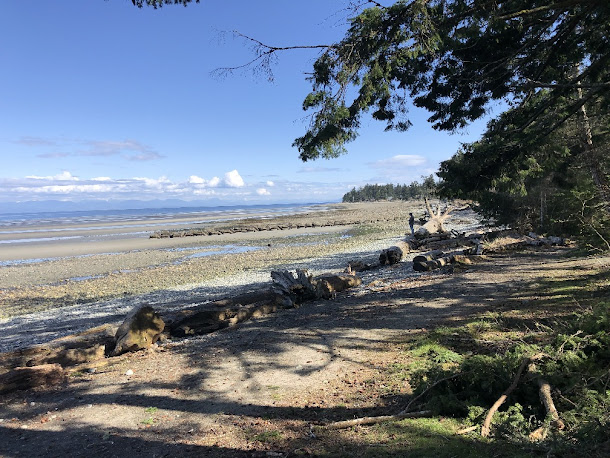 It was about that time when I suddenly became aware of what day it was.  It was a retired boondockers worst fear.  The approach of a long, long holiday weekend.  Quick decisions needed to be made.  Either find an even more remote, scenic place to hunker down and avoid the weekend crowds, or get out of Dodge and hit the ferry and get off the island before the crowds did.  So - that's what we did, and made a beeline for the ferry terminal at Departure Bay in Nanaimo.
We arrived at the ferry terminal at 6pm, just as the boat was leaving - not a surprise.  The advantage of traveling with your house, is that it doesn't really matter where you are.  I think we were a few vehicles short of getting on the 8:45 boat.  Oh well, there's another one at 10:10, we'll be on that one, just a bit later than expected. (Trying to remember convenient overnight spots near the ferry's arrival point at Horseshoe Bay, hmm?)
Alas, it was not to be.  I was scanning local marine, ferry and emergency radio traffic while we waited and overheard conversations about a 'man overboard', throwing of life rings etc.  I have no idea whether it was ferry related, but the arrival of an ambulance and rcmp car a bit later seemed to indicate that it may have been?  Finally, at midnight, we got on the 10:10 ferry!
Due to Covid, rules and regulations on the ferries have been changing and evolving.  For this sailing at least, all 'car' passengers were required to stay in their vehicles.  But for us 'big boys' on the lower deck with the trucks, we were not permitted to stay in our vehicles.  I have to admit, keeping Hailey company and catching a few Zzz's was very tempting this time around.  But, recalling the recent sinking of the Queen of the North ferry after running into an island at full speed in the middle of the night, I opted to follow the rules and leave Hailey to her fate below decks!
As a result, I had the front lounge area on the boat pretty much all to myself! 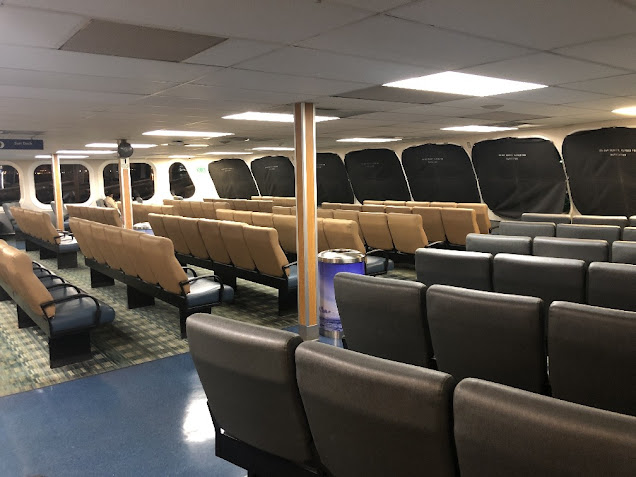 We arrived at Horseshoe Bay at 0120 in the morning.  Luckily, my memory had recorded a perfectly adequate spot to park for the night, not more than 5 minutes away - and included a view of the ferry docks!  Rather than the typical 'no parking' sign, we found this one! 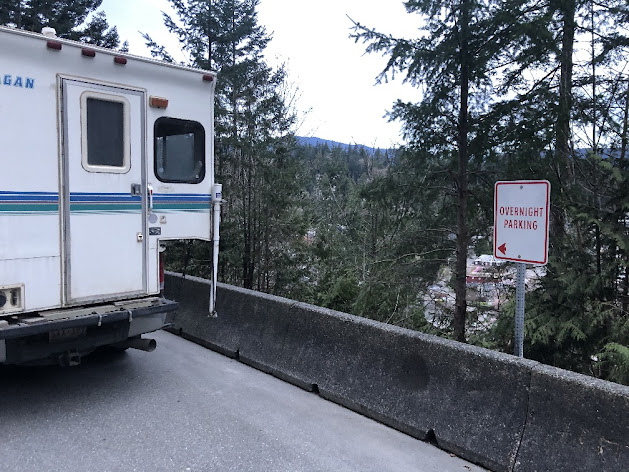 After a very short night we hit the road early, hoping to avoid any traffic issues going through Vancouver, and that plan worked out very well.  A lot of the snow had melted in the last month in the two major mountain passes we had to go through, so even though slushy conditions were reported on the overhead signs, the worst we had was some wet pavement from snow melt on the side of the road. 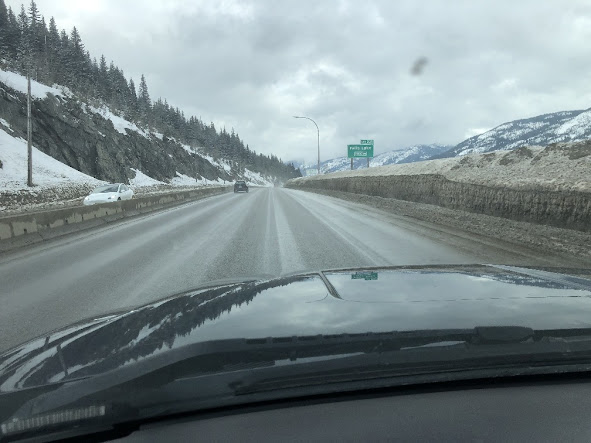 As a precaution, the water tank was drained, and the camper was winterized along the way.  Luckily, the truck camper is super simple to winterize, and takes only about 10 minutes on the side of the road.  But without the usual amenities, it was easier just to keep rolling to the east, making it about a 14 hour day on the road.
It was good to get close to home and see some familiar mountains for a change! 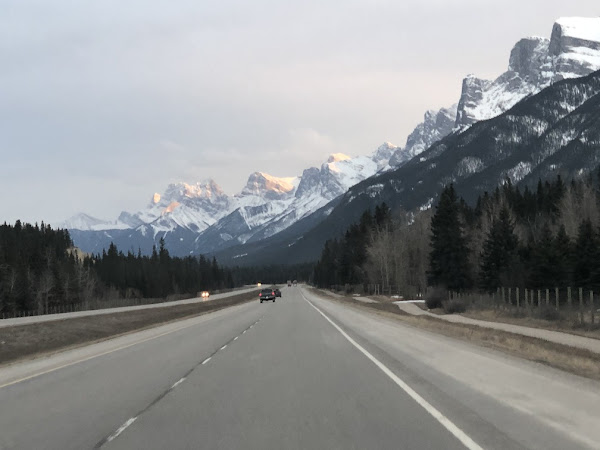 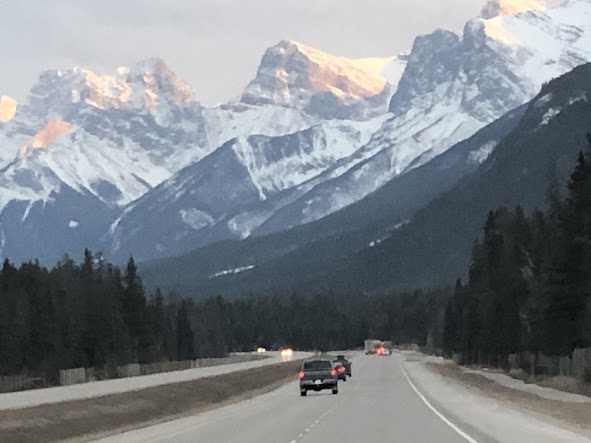 Besides, we didn't want to ruin our record on this trip.  In over a month, we only spent one night in a spot that was not on a lake shore, or ocean front property!  And that was a perfectly adequate trail head parking spot in the bush, with just a 20 minute hike to the ocean!
We got home to find only a few patches of snow remaining in the trees or in shaded areas, so no shoveling this time around.  My skating rink was ruined.  Time to put the skates away again!
With the lack of snow, any decent weather may find us out on the trail again soon, looking for more spots to camp and hang out in the local area.  Not sure when that will produce the next blog post?  Till then, stay safe.