We hit the California coast about three weeks ago, but since then we have been severely 'internet challenged' and combining that with self isolation, etc, the blog has not been updated.  I would have loved to have created a post or two while isolating, but the awkward Blogger editor requres that you be online for the entire time, and that was just not possible.  With Live Writer working, I could have designed the posts at home, then posted whenever internet was available.
Anyway,  we spent a bit of time out on the coast near Westport, enjoying the warm sunny weather that the forecasts had said would all be rain and cool. 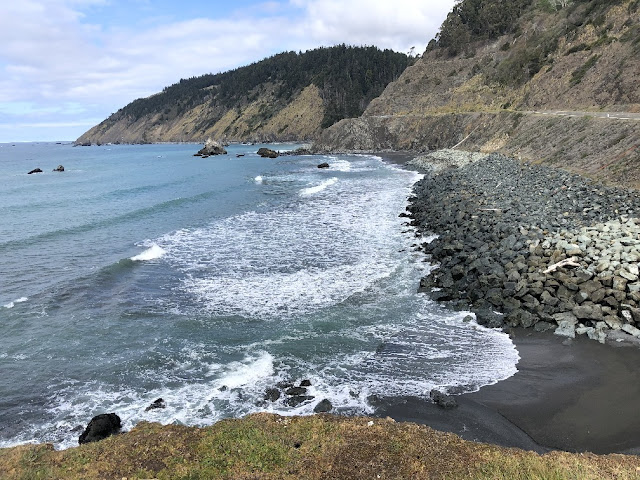 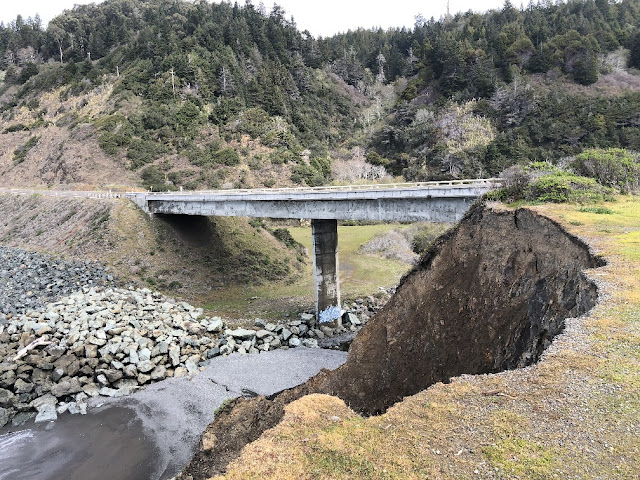 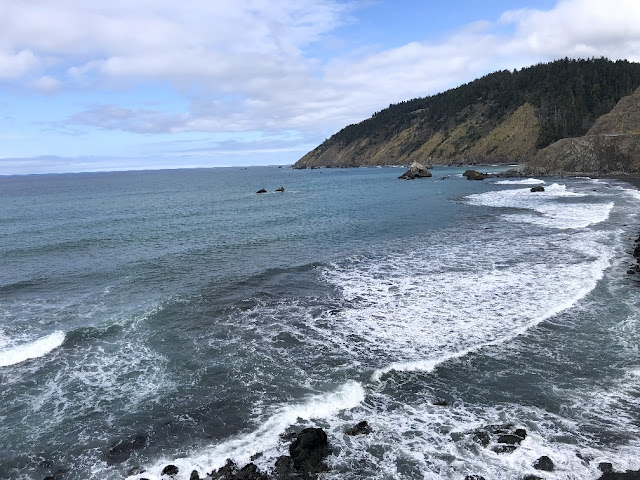 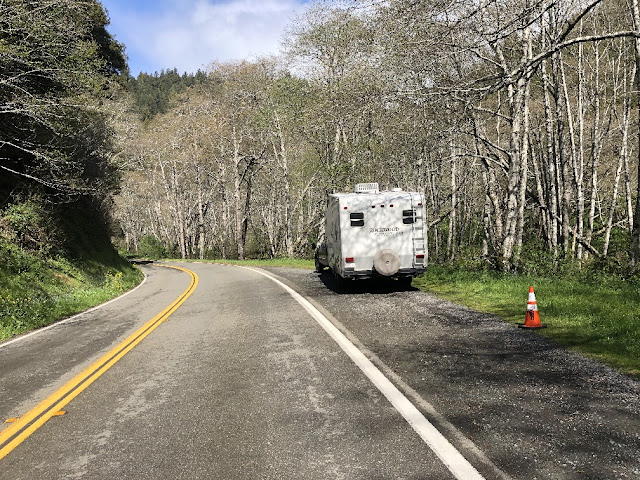 California was just taking steps to start locking down, and in hindsight, maybe we should have isolated ourselves there, in the nice weather, instead of being at home!  We continued up the coast spending nights along the coast near Humbug mountain, and Eureka, Ca. 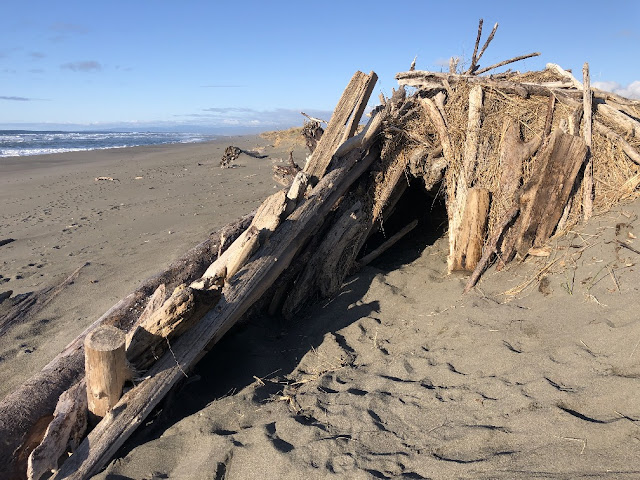 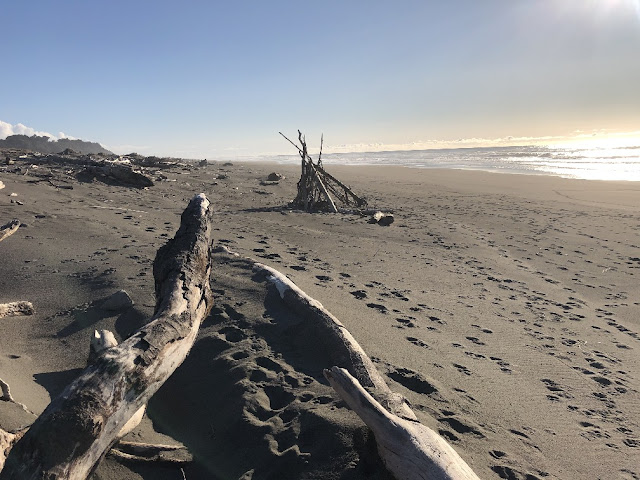 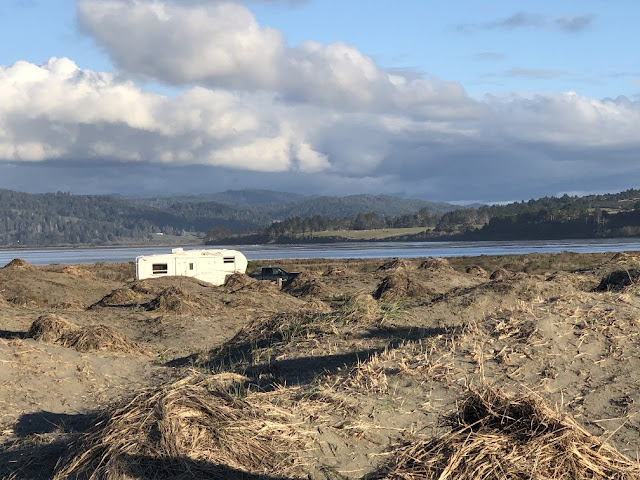 A small herd of elk watched us from the slopes above. 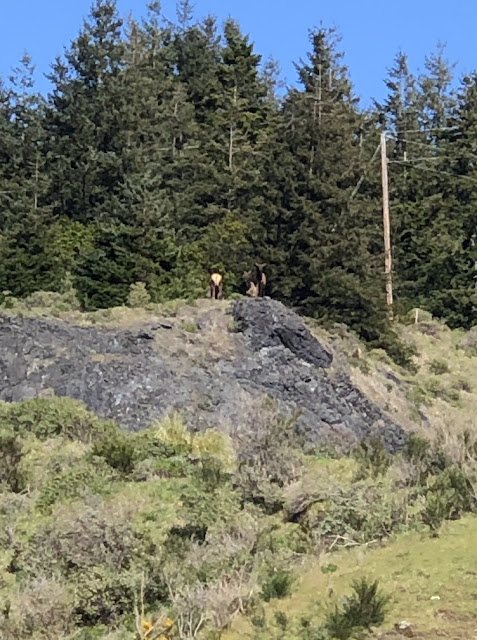 Hailey was glad to get out and see if the mice needed further training! 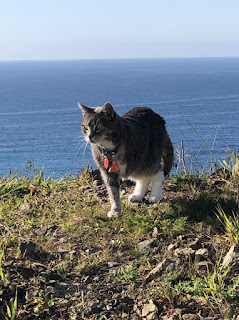 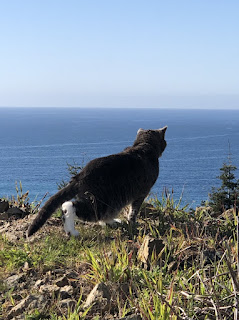 I sure hope this isn't a fellow blogger, but I saw this unfortunate couple bogged down to the axles on the beach at Port Orford.  I watched as the tow truck arrived, but the tow truck was not about to go out on the sand and get stuck as well, and a direct pull from a safe location would have pulled the van directly into a huge pile of driftwood logs.  Several other 4x4's showed up to assist, and by using a jeep as an anchor point to deflect the pull in the correct direction, eventually they got it back to solid ground.  The poor fellow's femal companion did not look too impressed!  Luckily, I think it was high tide at the time, so they weren't about to get flooded at least! 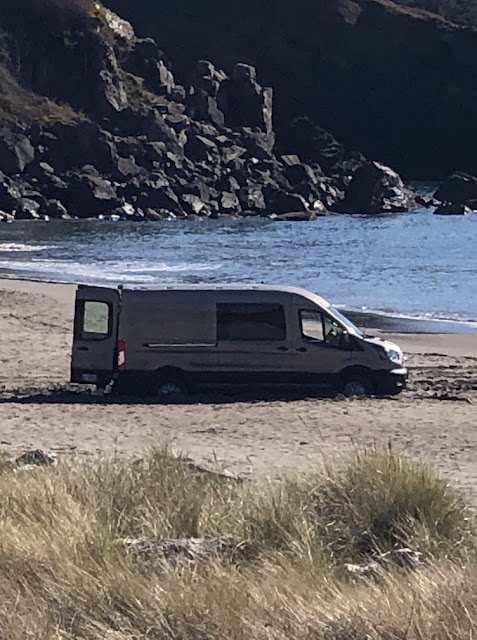 Like most seaports worldwide, there were plaques listing the name of those who did not return from the sea.  There were more historic plaques nearby, but they had to expand the memorial to add more recent names :-( 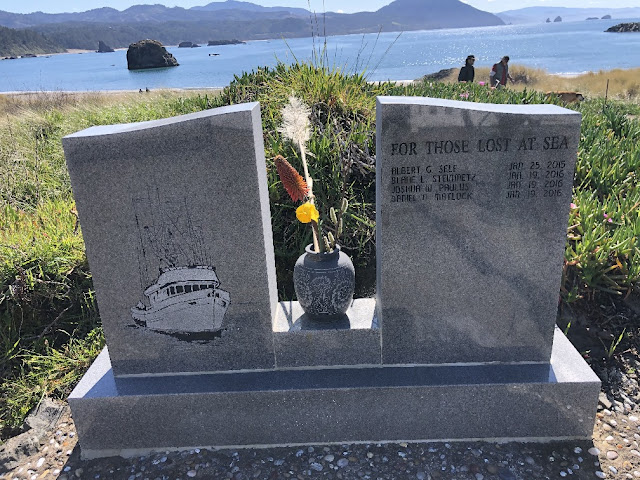 Unlike most ports on the coast, there is not really a protected harbour here, so all boats, from the smallest car-toppers, to some pretty big commercial fishing vessels are raised out of the water by huge cranes and set down on their trailers, and parked nearby.
Check out the videos!

Continuing northward we turned inland at Lincoln City Or, and spent the night as usual at the Evergreen Space center in McMinnville, home of the Spruce Goose.  Making good time, we spent another night on the lake just south of Sandpoint, Id, and ran for the border in the morning.
Crossing over the border was smooth, with a warning to go home and stay there! 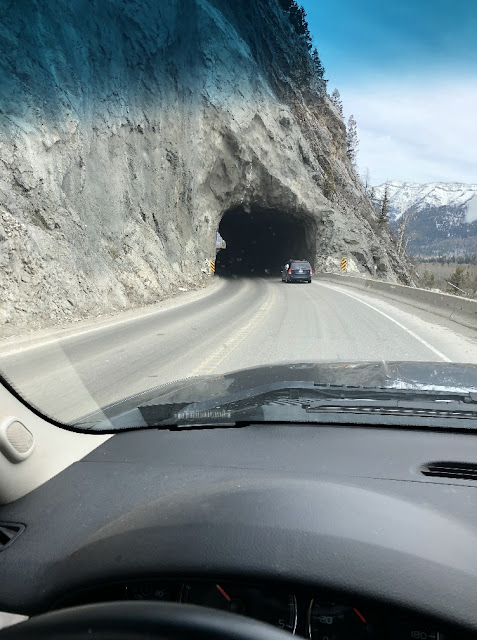 A bit of snow started to show up in the ditches as we moved further north. 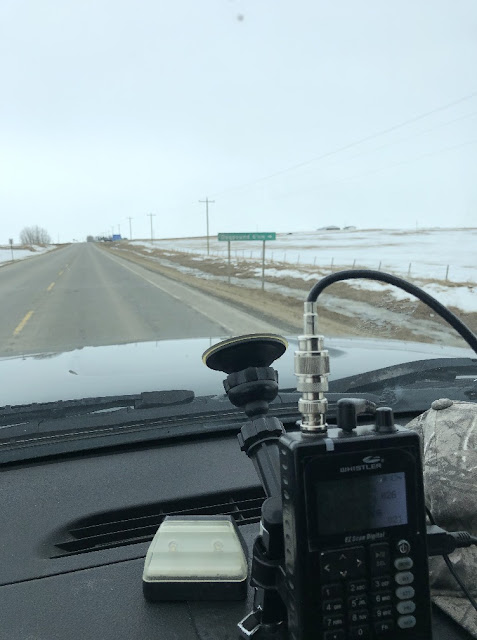 .
As sometimes occurs, with these early arrivals, the snow was too deep and I had to drop the trailer in a plowed lot, while bashing my way in with the truck, getting stuck, and doing it all over again. 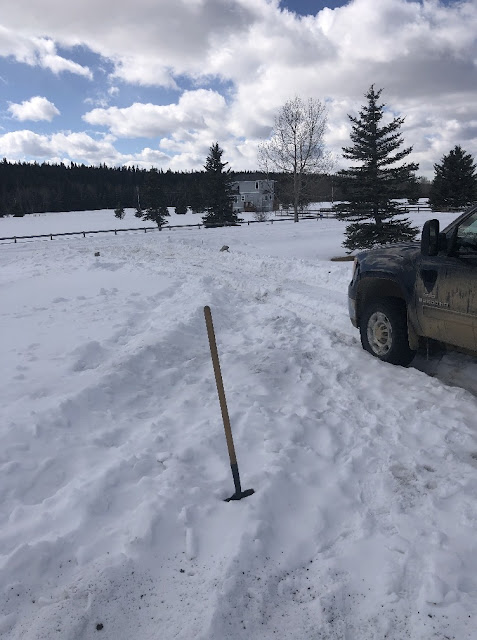 Roads were poor, and even with 4 wheel drive, getting up a couple of the last muddy hills was a challenge. 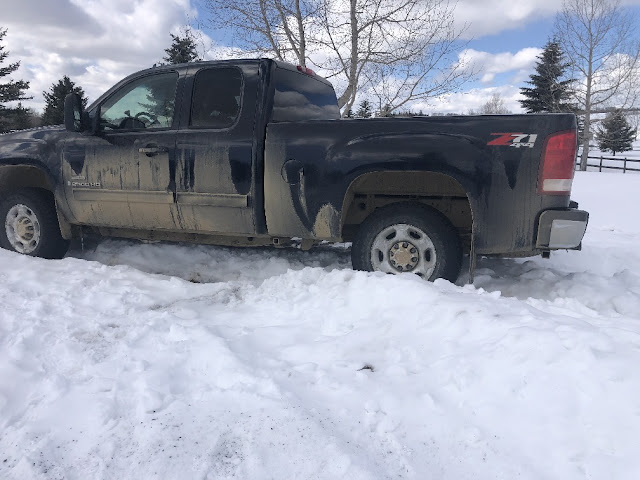 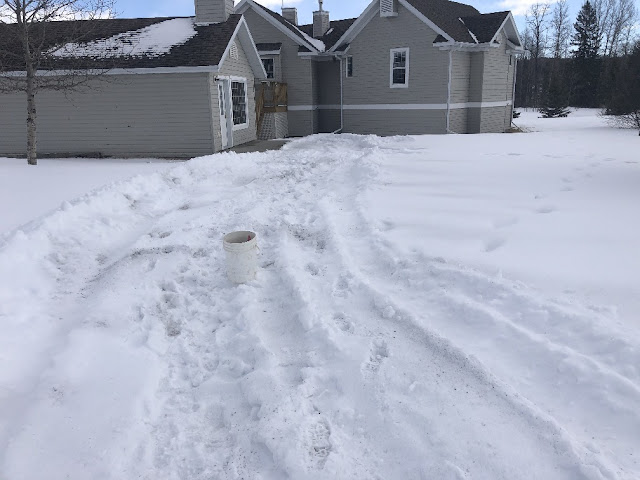 After a couple days, the guy came through with the plow and opened it up a bit. 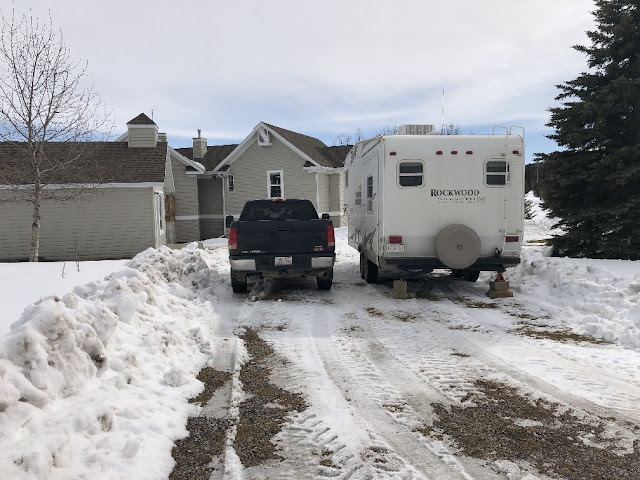 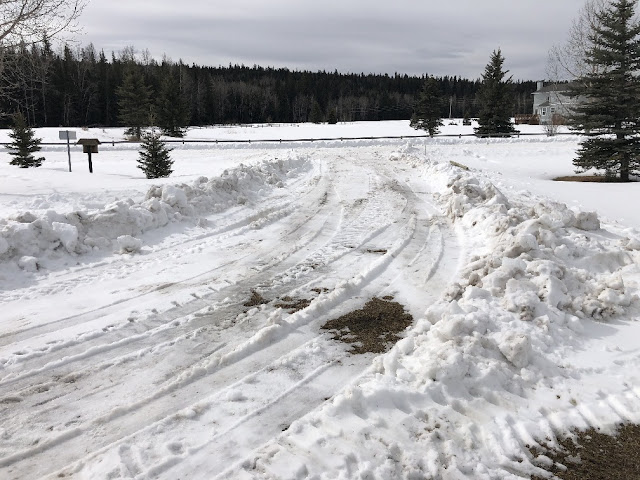 It was almost nice, for a day or two, and Hailey was out enjoying the sun, waiting for the first few blades of grass to poke through. 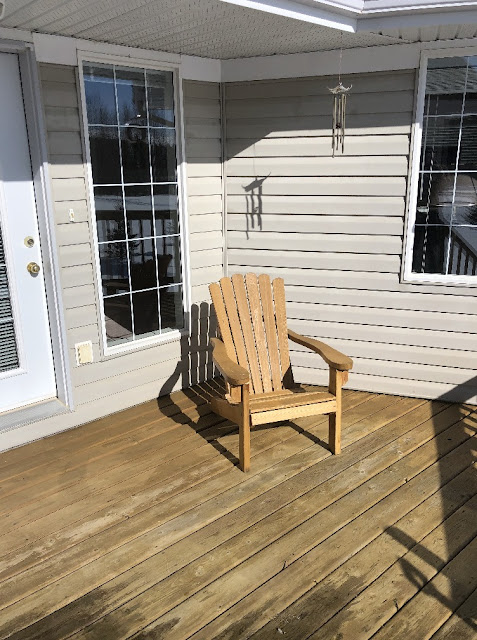 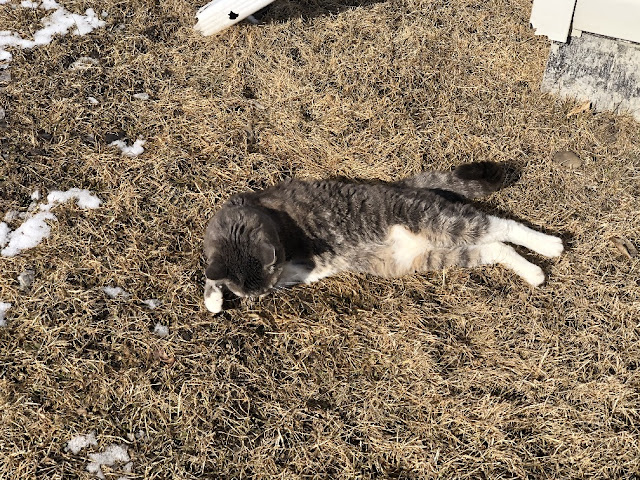 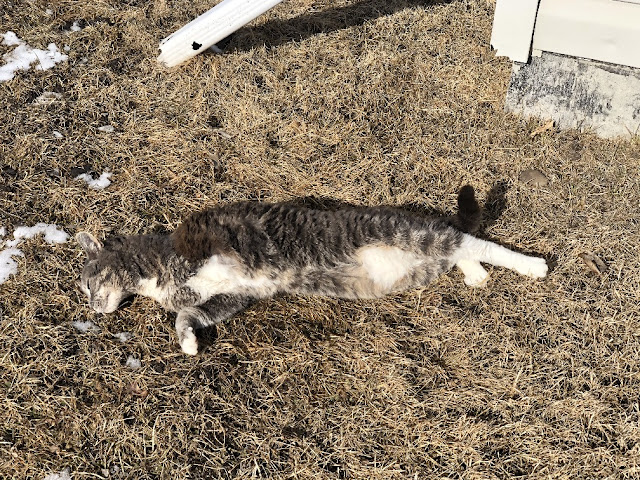 But then, the snow came again - with a blast! 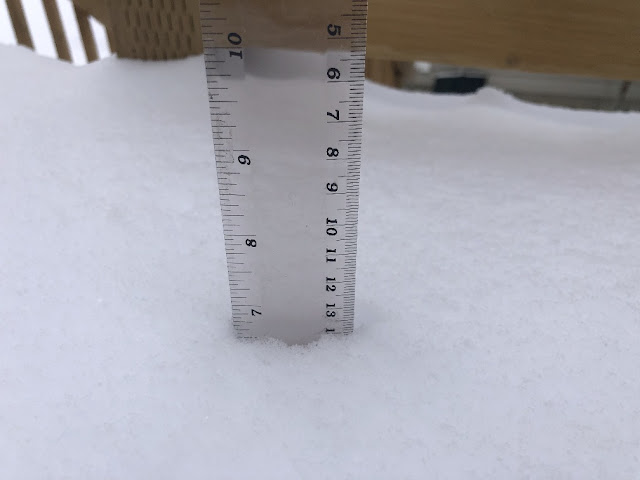 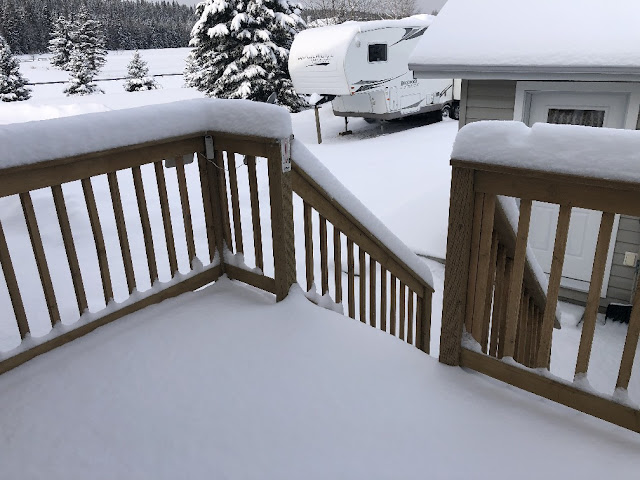 And, the temperatures dropped one night to -27C!  That's rude, mid-winter temps, not March or April! I'm ready for some global warming!  And if the snow wasn't enough to send us back to Arizona, then the winds came, and turned things into a blizzard for a day or two! Bring on summer, I'm ready!
In the meantime, Hailey and I have figured out that sitting in front of the fireplace is about the best place to be! 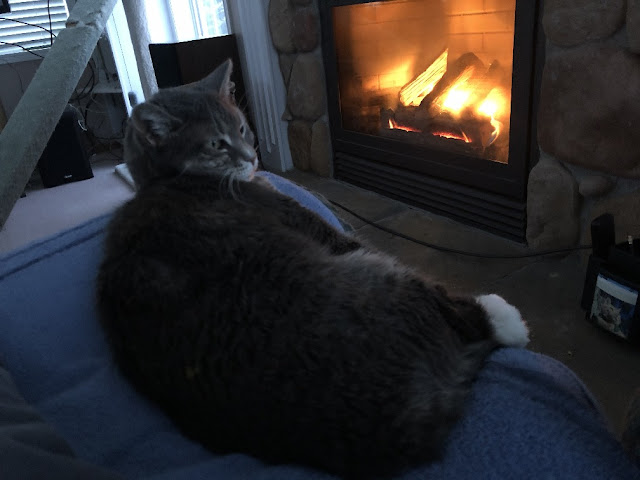 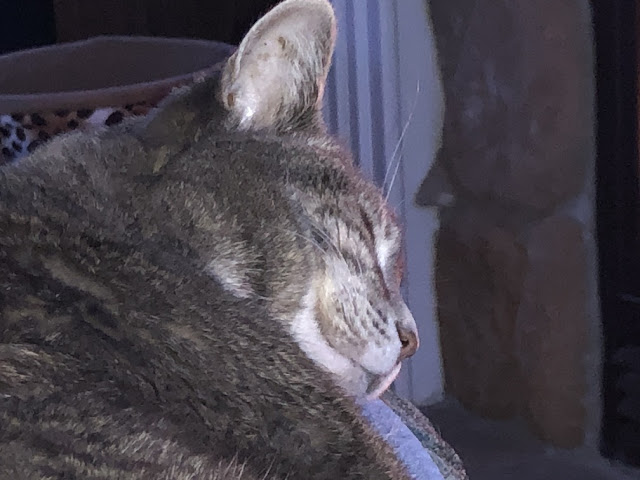 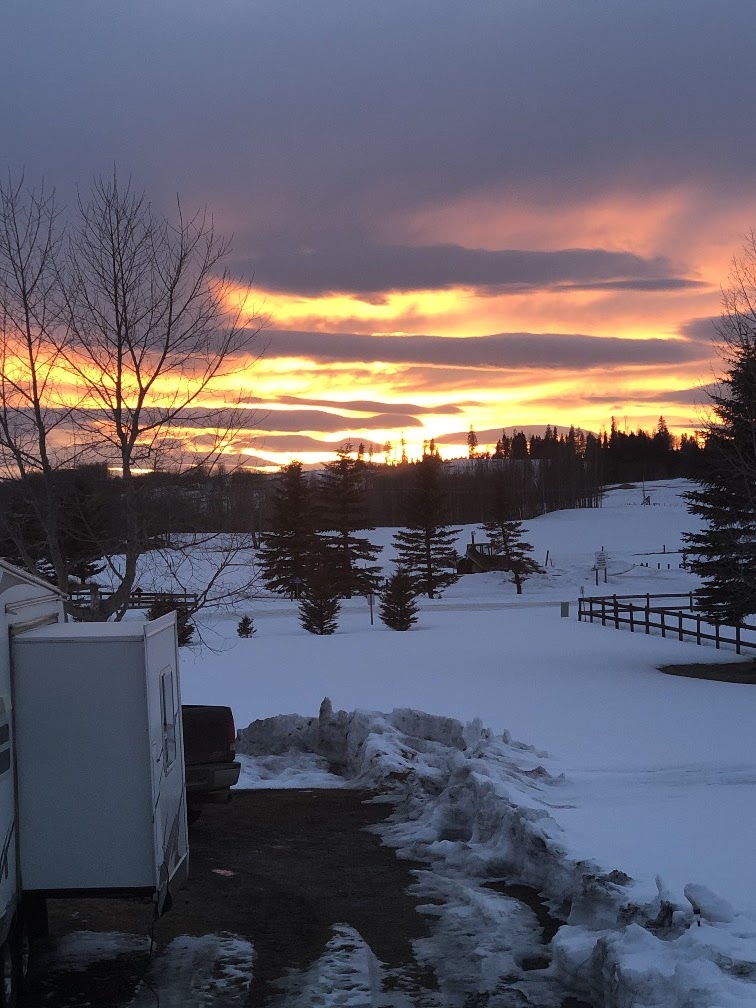