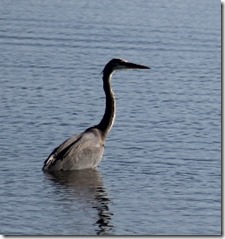 After arriving on the north coast of Oregon, we spent the next few days exploring around the Tillamook area.  We ‘random camped’ in several different spots over the next few days.
This heron looked like he’d waited too long on the incoming tide.  Finally, he decided it was getting a bit too deep! 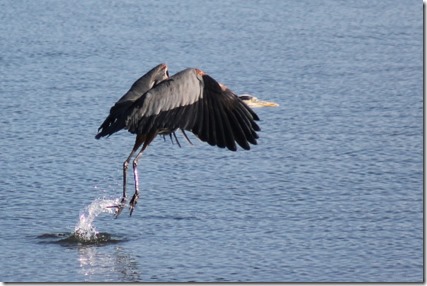 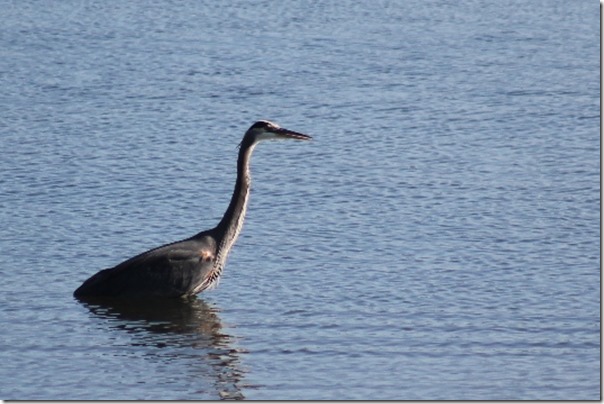 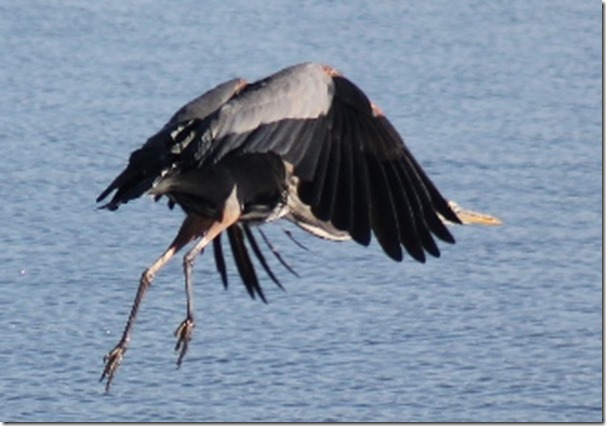 Weather was great for a hike of about 3.5 miles down the beach to the south jetty, with not a soul to be seen, and surprisingly not a scrap of garbage till the very end when a bit had accumulated by the jetty. 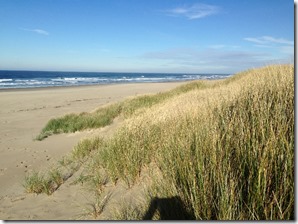 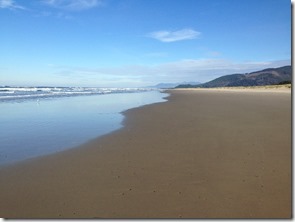 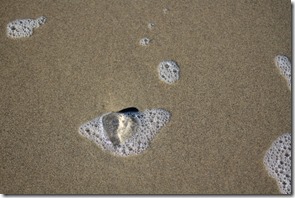 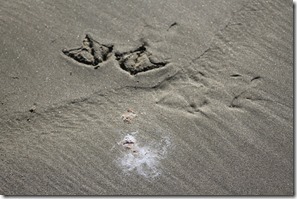 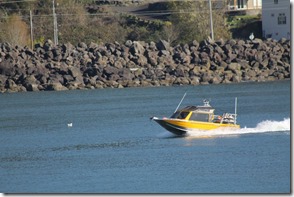 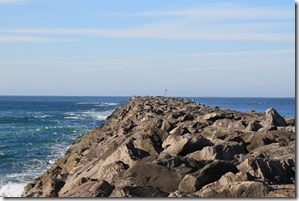 The route back was along the other side of the spit facing the estuary.  These three guys were hard at work harvesting something out of the mud at low tide.  They had a pump running in their boat anchored in slightly deeper water, and another pump on the mud beside them, and then were probing into the mud with a long nozzle.  Whatever it was they collected went into the red buckets. 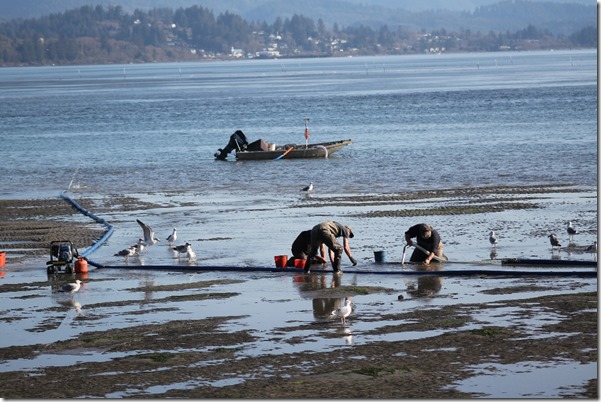 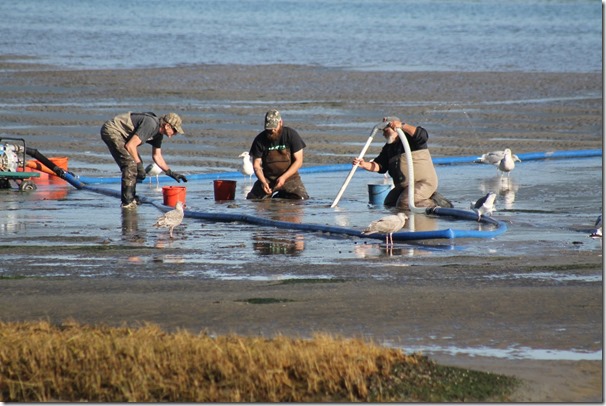 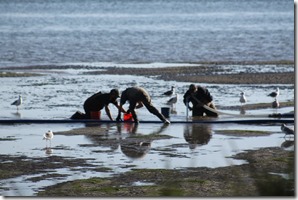 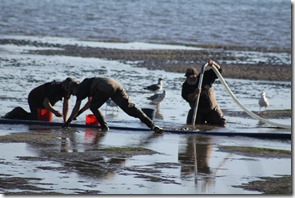 Another boat moored in deeper water was displaying dive flags, so it must have been harvesting something from the sea floor as well … 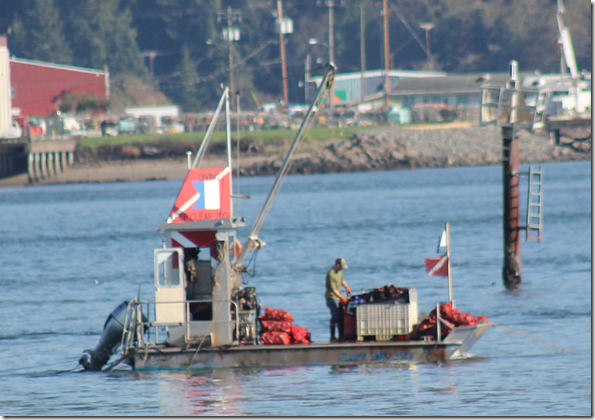 After giving the Tillamook area a good going over, we headed a bit further north up the coast!  I know one should be headed south at this time of year, but there was a need to hang out in the general vicinity for another week before doing so.  So, … as we made our way a bit further to the north around ‘camping time’

, a sign for the Neahkahanie Mountain trailhead caught our attention.  This is clearly NOT a place to drag your fifth wheel.  But we like a challenge, so we did!  The road goes a mile or so before dead ending at a gate with a very small parking area.  If empty, and if the sliding hitch feature was utilized, the turning around manoeuver might have been possible.  But the lot was not empty.  So after backing down the narrow road for a couple hundred yards, there was a driveway that made a turn possible.  Once turned around, did we head down for the safety and space of the highway?  Nope.  Instead we then backed back up the road we had just backed down, till we got to the parking area again facing the other direction.  It was a bit slanted, but that did nothing to spoil a good nights rest.
Since we were there, in the morning, the natural thing to do was to hike up the trail to check out Neahakanie mountain!  In the Google Earth view below, the top of the mountain trail is right where the little green tree symbol is in the centre of the photo.  The trailhead is hidden in the trees down below it, but above the highway.  The mountain is apparently one of the highest on the Oregon coast. 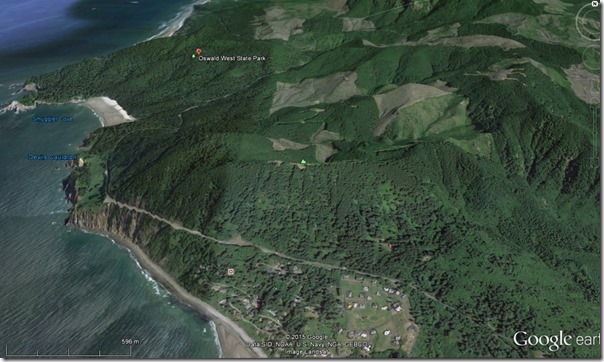 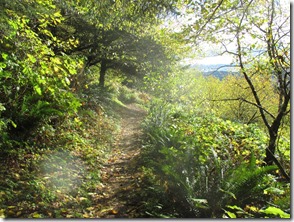 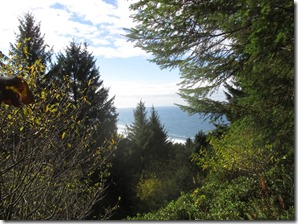 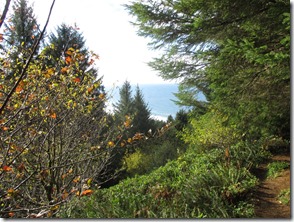 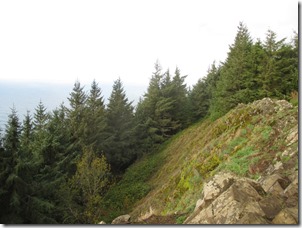 From the top, the view south is over the town of Manzanita below. 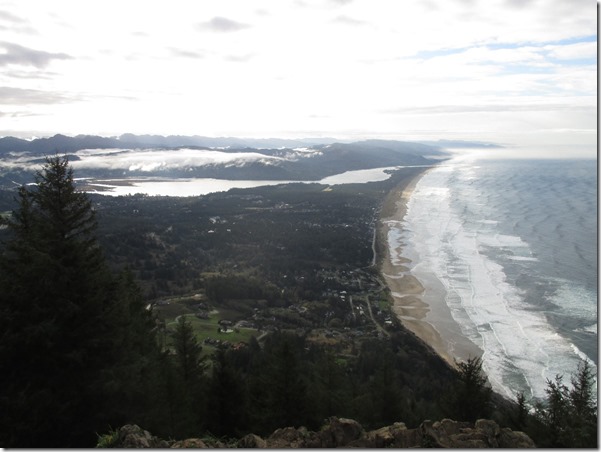