I didn't want to spend a lot more time at the hot springs near Bridgeport, Ca, as the amount of sunshine (therefore warmth) during the day was limited, and I also didn't want to deal with any weekenders that might show up.

To make sure I had enough fuel to avoid buying any at the prices in Bridgeport (below), I dumped in both of my 5 gallon cans of spare fuel, and we headed south on the 395. 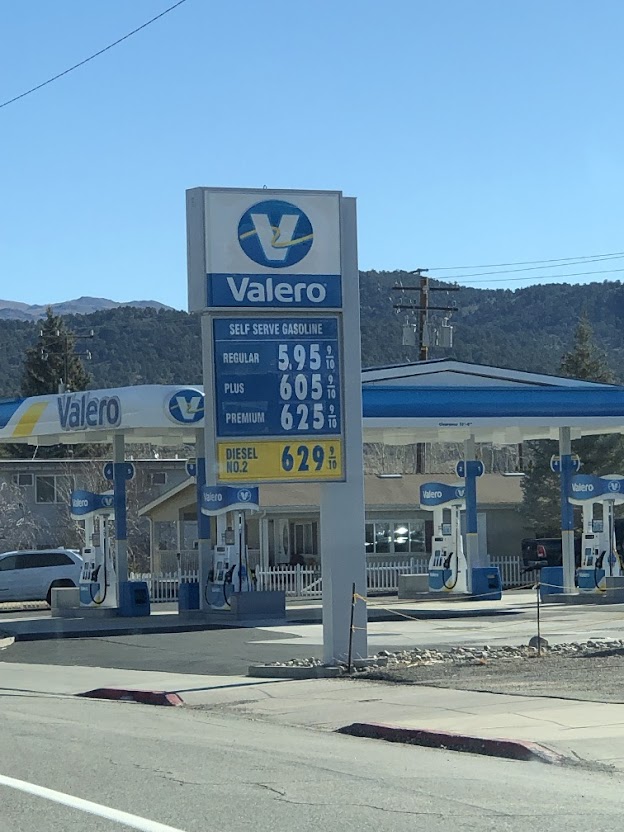 Little consideration was given to stopping at all the hot springs near Mammoth Lakes for some of the same reasons as above.  As well, the ski hill there was now open for the season - which usually means that crowds of skiers descend on the pools every evening.  And lastly, several years ago, BLM decided to block off the spot near the springs where I often spent a few days camping and soaking.

So we carried on down to Bishop, where the Paiute Casino gas station provided us with fills of diesel, propane at reasonable prices, and water for free!

Daylight was showing signs of fading for the day as we approached Lone Pine, so it was an easy decision to overnight up in the Alabama Hills where we have spent a fair bit of time in the past.

The area was getting a lot of use and abuse from a variety of user groups, resulting in lots of trampling, dust, and most likely a lot of human waste spread around.  So, even at our last visit two seasons ago, BLM had started to rehab some areas, and re-planting some vegetation, and closing some questionable routes.  This has obviously been continuing.  Heading up into the hills from town, virtually all of the admittedly lousy, uneven, roadside spots are now signed as 'no camping' from the landlord, LA Water & Power, who own most of the valley.  Up on Movie road, most of the easily accessible (dusty) roadside spots are now marked as 'no camping'.  And, the entire area to the west, favoured by rock climbers in their vans, tents, VW buses, is now marked as 'day use only'!  I can imagine the climbers are not impressed.  Sure, they can still camp in the 'open' areas and commute to their favourite climbing routes, but ...

I headed for my own 'usual' private spot, but it was already occupied (dang it all), and I managed to add some new grooves to the truck box getting the 5th turned around on the narrow, uneven roads :-(. 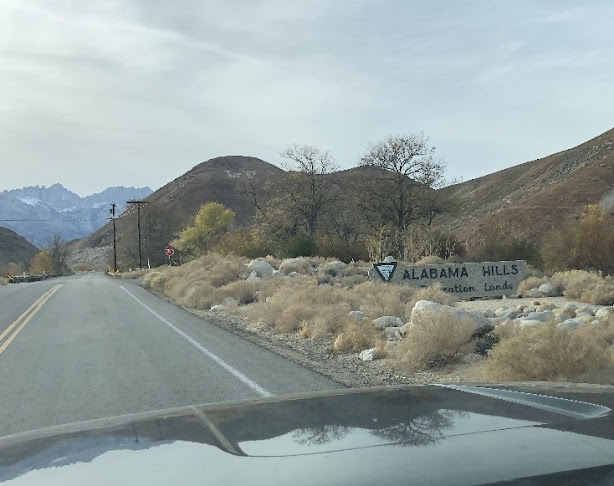 There are still a lot of available spots for vans or truck campers, but much less so for bigger rigs, unless they like to crowd together in the area where the pavement ends?  I don't.  We spent a quiet night in a previously scouted area - generally on the way towards Tuttle Creek campground.  Again, the weather was not that inviting, so it was only an over-nighter.  We had warmer places in our sights! 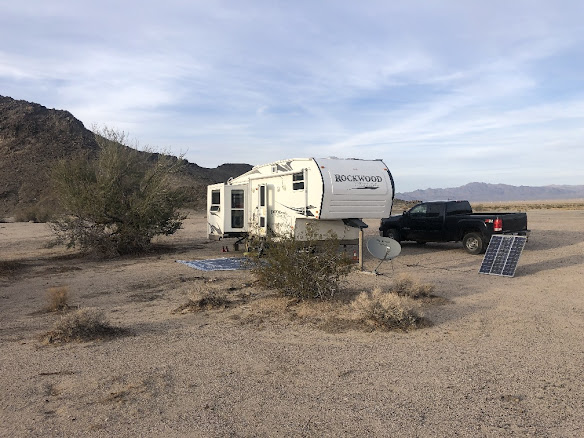 Next day, after stocking up on fuel and food again in Barstow, we aimed for a spot in Mojave National Preserve where we have previously camped and enjoyed several times in the past. 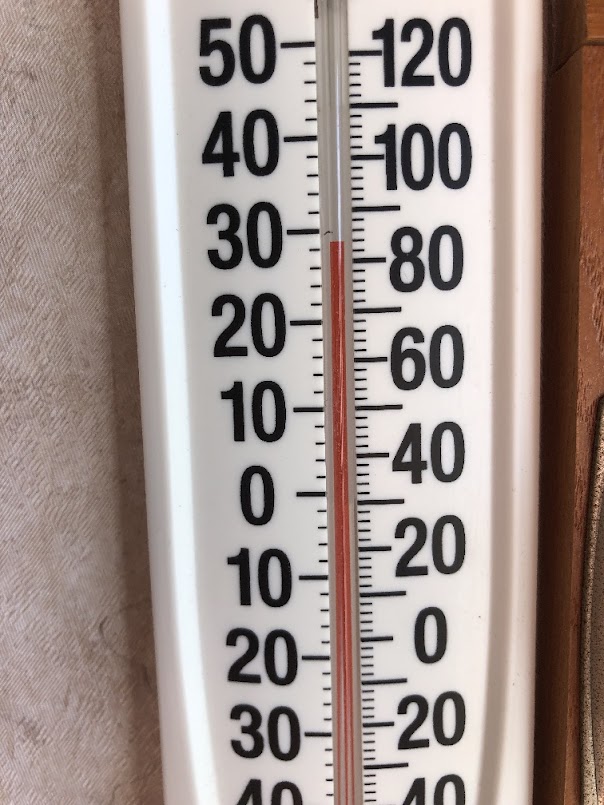 Decent warmth - finally!  Time to kick back, relax, stop driving and enjoy the weather, the scenery, and the Mojave desert.  Hailey loves it too.  She was eager to get out, hunt for some kangaroo rats, and prove that 3-legged felines can still climb trees. 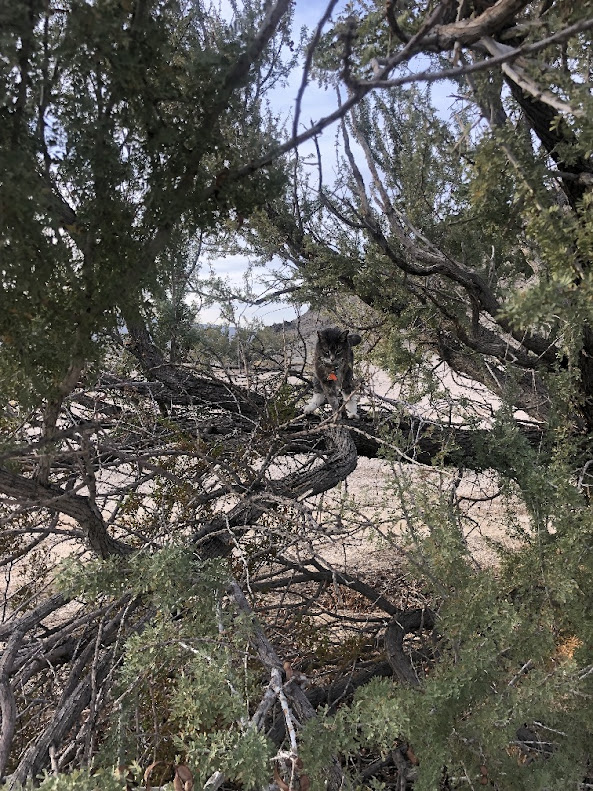 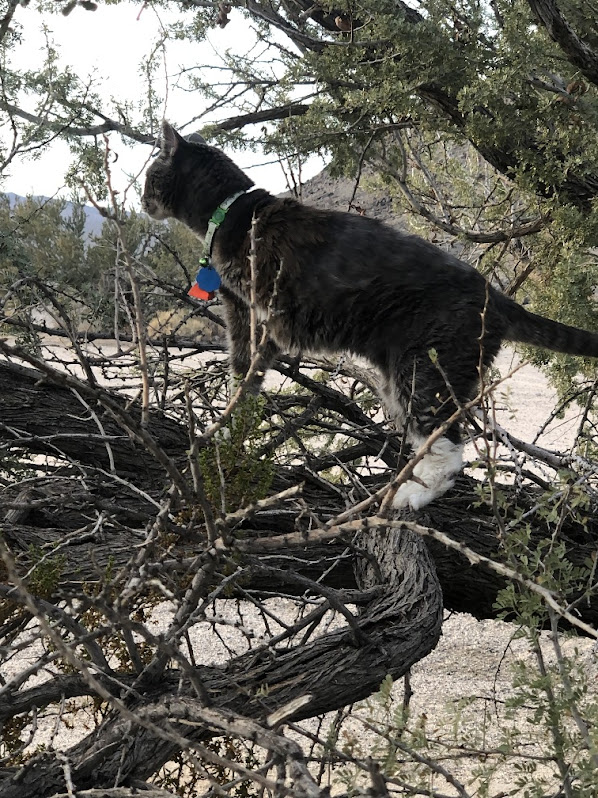 And enjoy the sunsets! 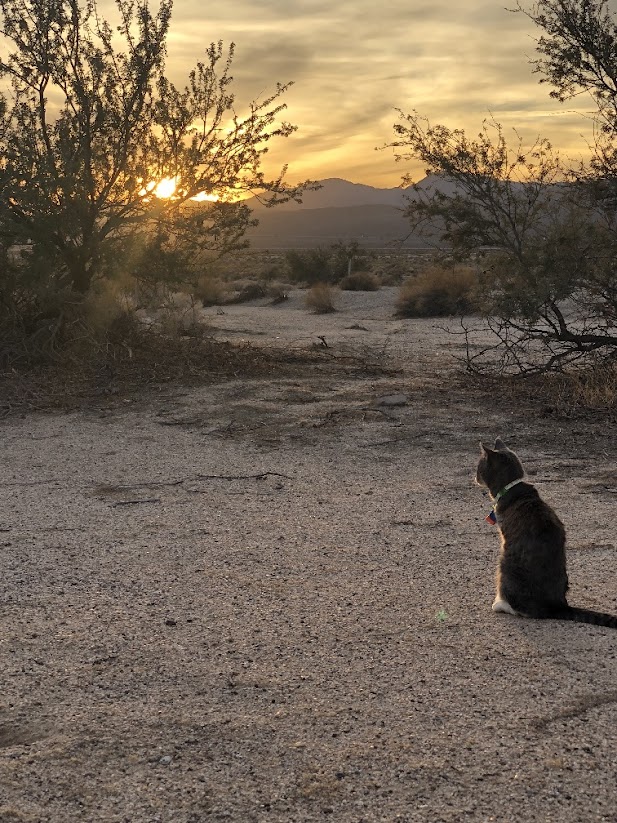 In fact, this is the spot we came to relax and rehab after having her leg amputated in Vegas two years ago. 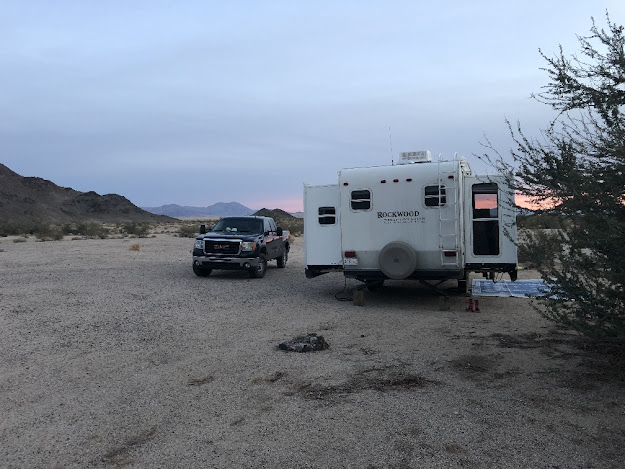 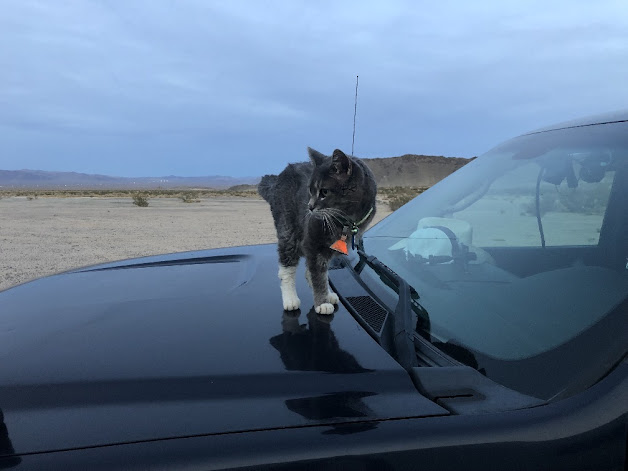 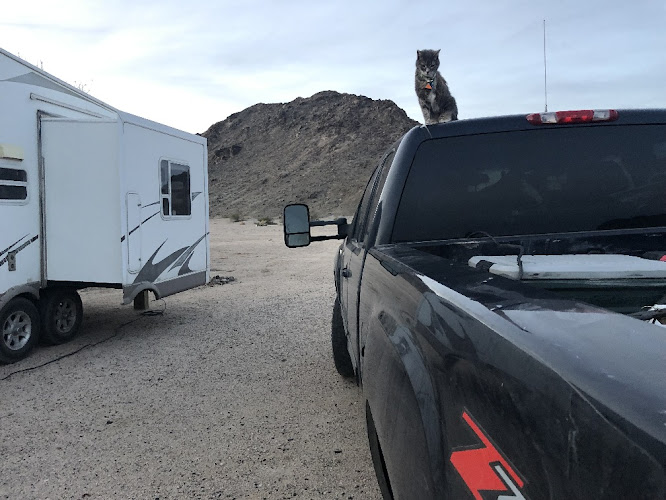 My 'new' method of satellite dish stabilization has now been tested for two years, and I no longer bother bringing along any other type of support.  Usually, I clamp the plank under whichever corner jack of the rig has a southern exposure, but this time the front hitch got the nod.  Even in strong winds, that dish is not going to move - unless the rig tips over.  Simple, free, effective. 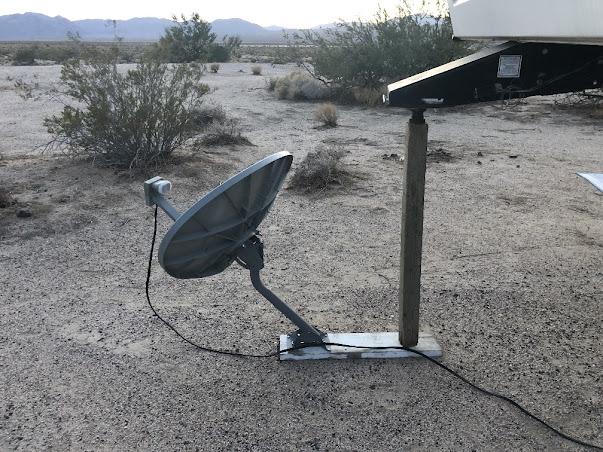 This area has a lot of potential for exploring old abandoned mines and structures, old trails, mountains, caves and dry lake beds. 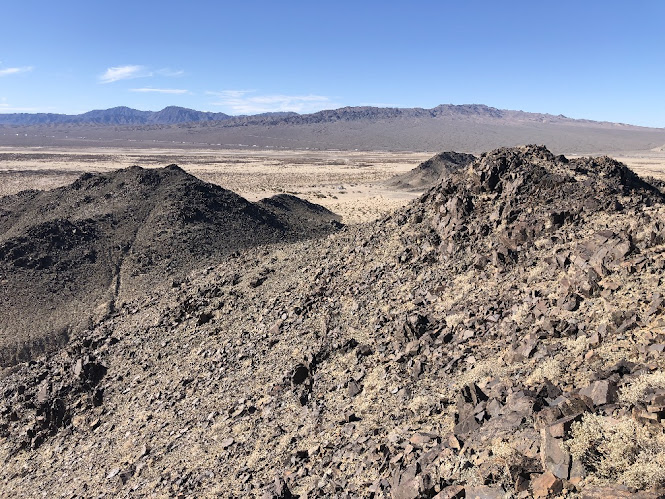 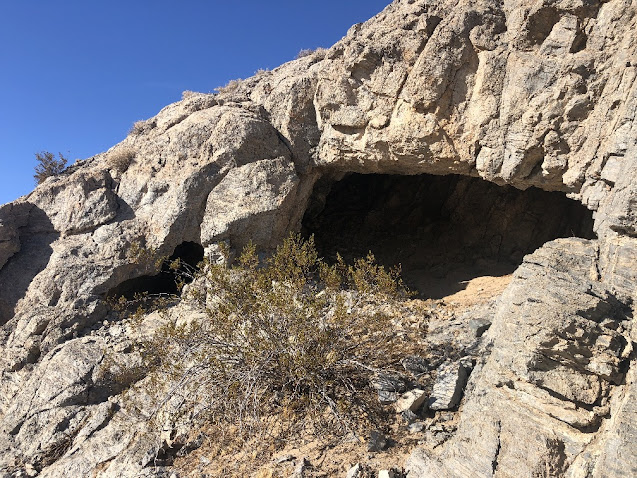 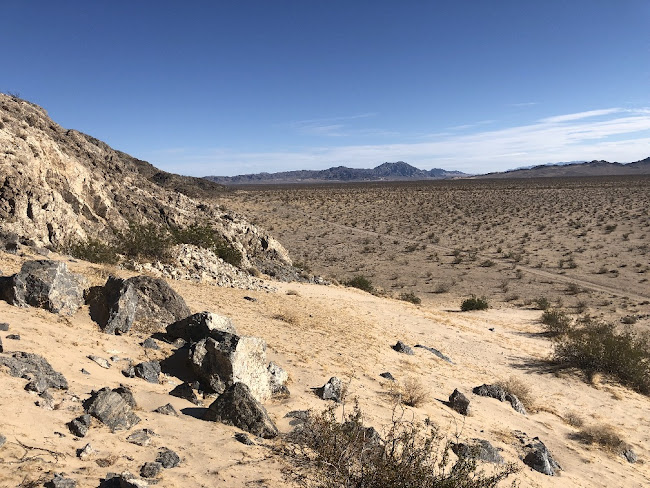 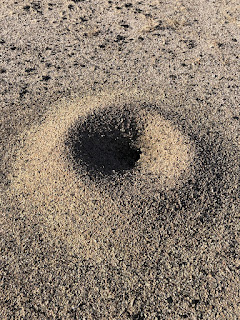 No one else camped within view, or for miles, although one night a jeep and a tent appeared not 50 yards away despite a thousand square miles of other options.  But, they arrived in the dark, were quiet, and left first thing in the morning. 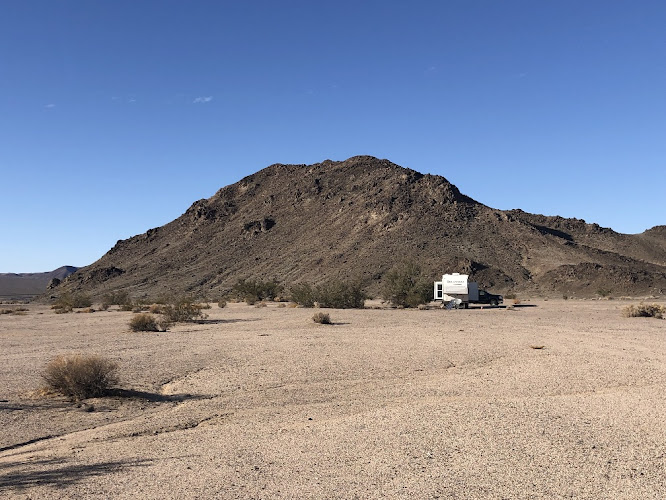 I had the new e-bike out - cruising for miles across the dry lake bed and trails.  I think it will prove very handy down here this year. 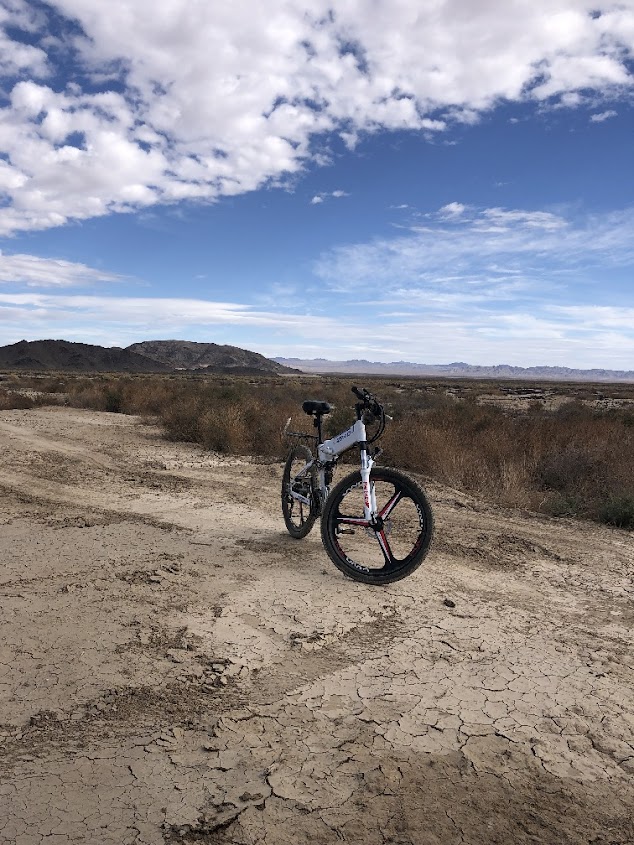 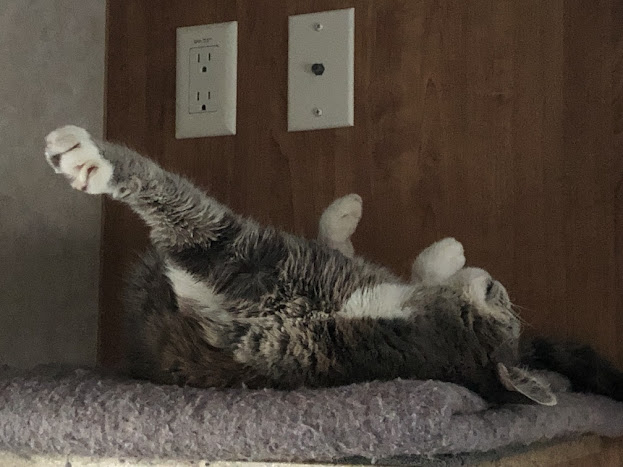 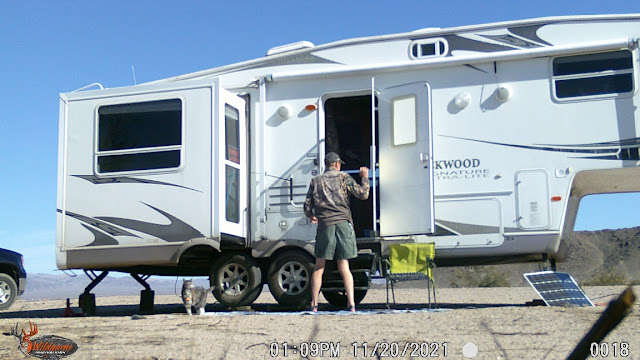