Town of Nipton, Ca For Sale 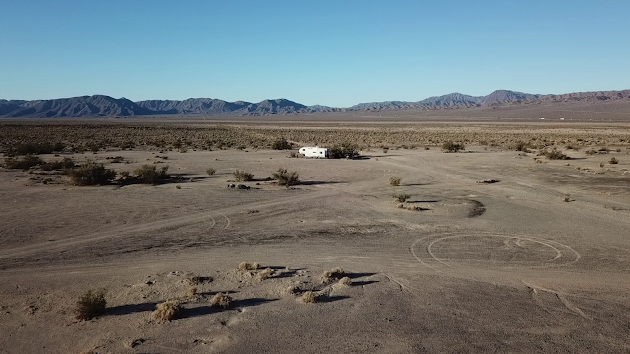 We spent almost two weeks camped in the Mojave desert near Baker, Ca.  This allowed us to avoid the crowds and traffic during Thanksgiving weekend.  From our spot out in the desert, we could see miles of I-15 packed with sometimes slow moving bumper to bumper traffic, and a solid line of headlights and tail lights at night.  It was great to avoid all that. 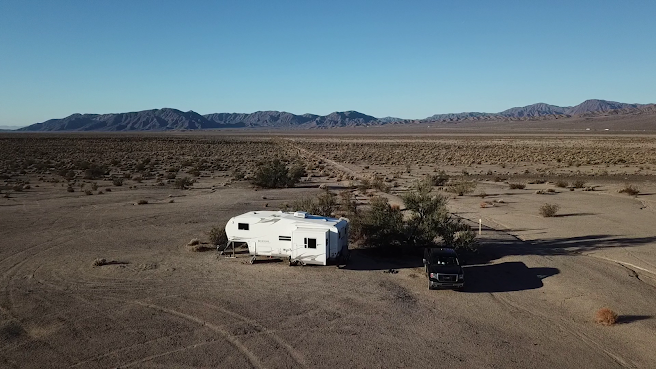 In the town of Baker, midway between LA and Vegas, there are quite a number of E-V charging stations, where all the Teslas go to hang out!  Lucky all the vehicles on the road are not yet needing a charge, as there would have been a 20-30 mile line-up for a half hour charge.  But I guess it's a start! 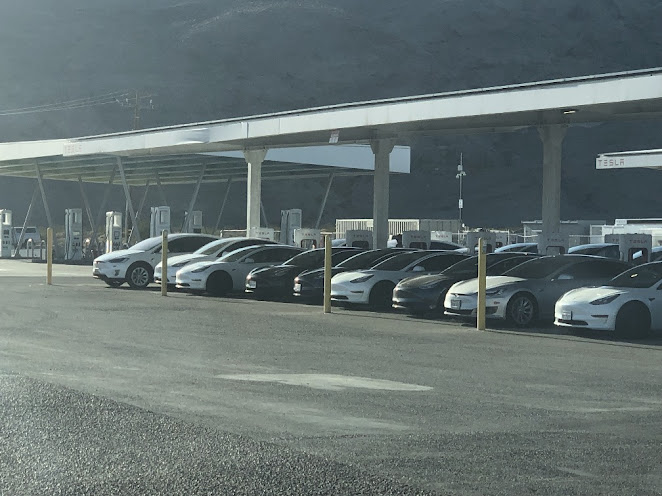 Some days were rather windy in the desert, with some occasional blowing dust.  But there were some calm days as well, making an evening fire quite enjoyable. 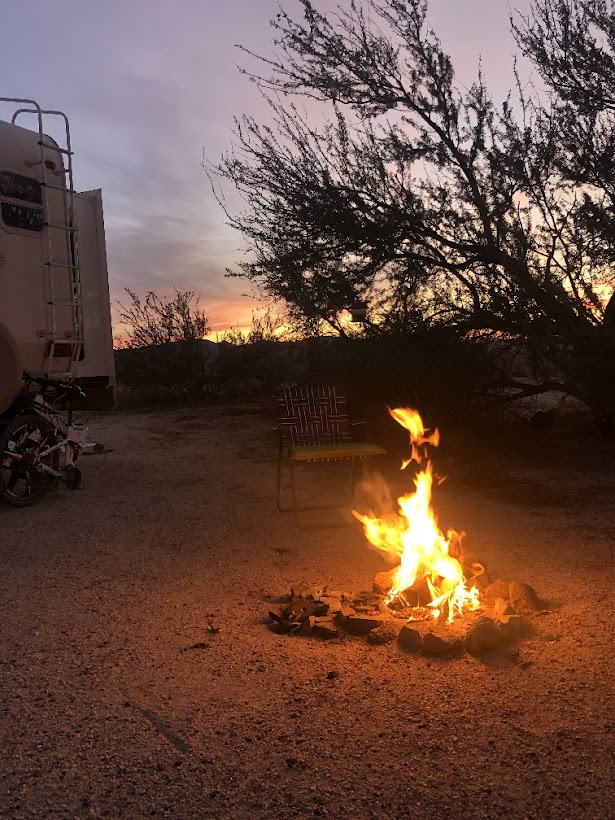 On our last day there, a lone hummingbird finally showed up at the feeder. 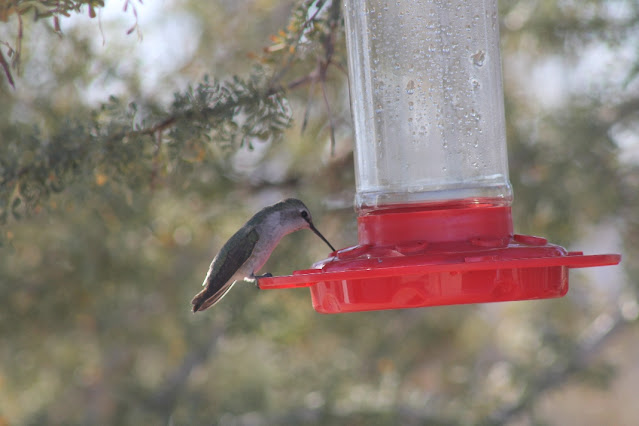 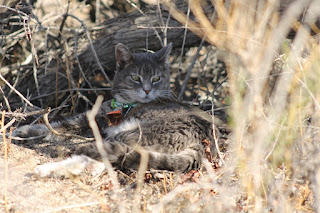 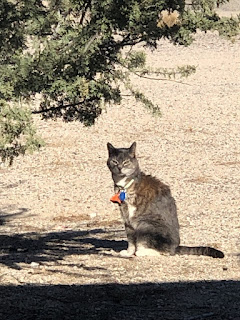 Not much wildlife in the area to be seen in daylight, but there were several night time visitors! 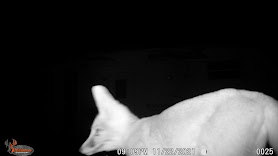 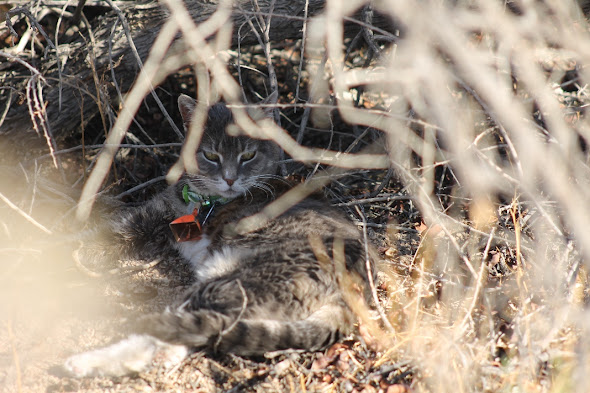 With the long weekend behind us, Monday was the day to move out and find some new places to hang out.  We took I-15 to the east a bit, then turned off on 164 over to Searchlight, Nevada.  Along the way, we passed through the small town of Nipton, which is currently for sale - if anyone fancies owning a town! 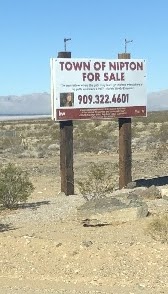 Quick stop along the way, with some Joshua Trees for a backdrop. 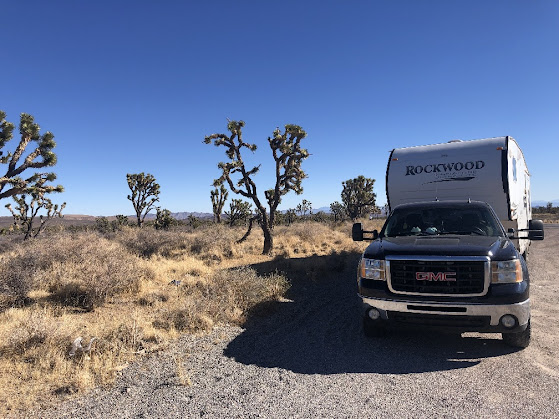 We made a quick stop in Searchlight for some propane, then headed east towards Cottonwood Cove on Lake Mohave (Colorado river).  It's in the Lake Mead National Recreation Area, but in the past the entry gate has always been closed.  This time it was open, and the ranger told me that because Lake Mead was so low, they expected more visitors to this area - so they stayed open longer! 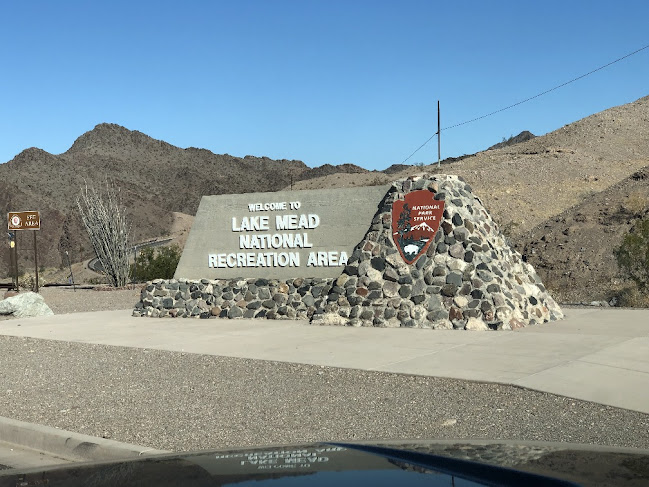 We didn't go down to Cottonwood Cove however, instead turning off down a six mile dusty, washboard road to Six Mile cove.  Last time we were there three years ago, the road in was horrible, but this time it was not nearly as bad.  Either that, or I'm getting used to it!
There were only two other rigs at the far end of the beach, so we were soon set up and enjoying the waterfront spot.  This rec site has three vault toilets (regularly cleaned), and two huge dumpsters.  Last time I was there, the dumpsters were wide open on top, no doubt resulting in a lot of trash blowing out, or getting scattered by wildlife.  Nice to see this time, they were all covered with secure lids. 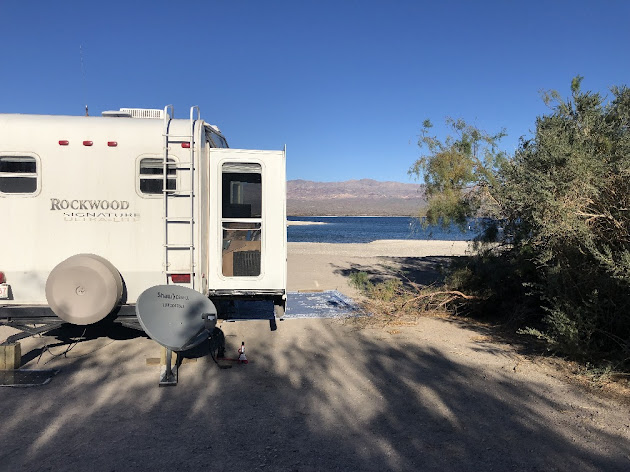 Soon, Hailey was out exploring, and checking out the beach and the trees. 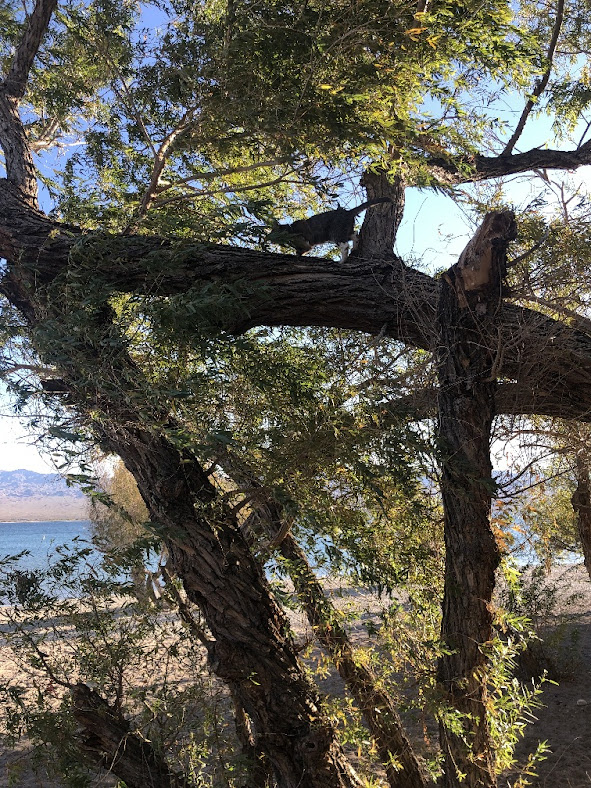 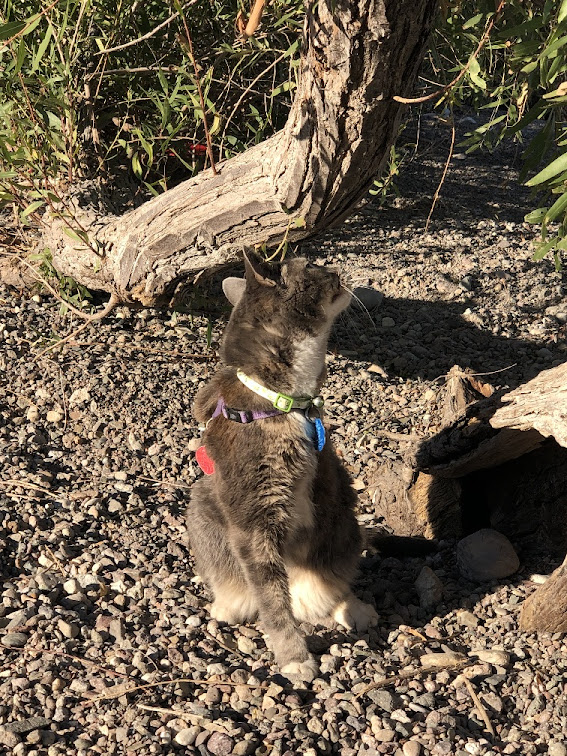 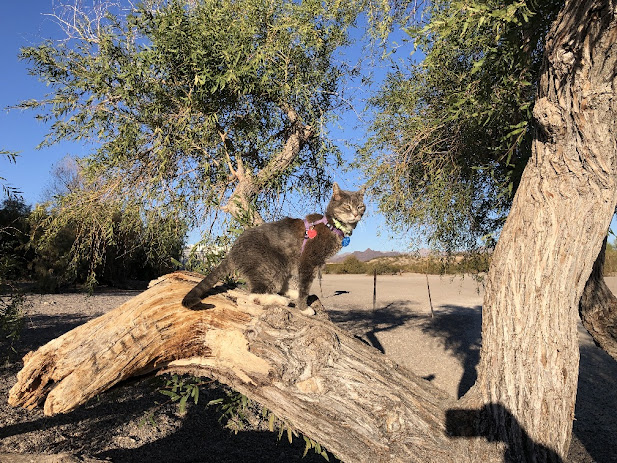 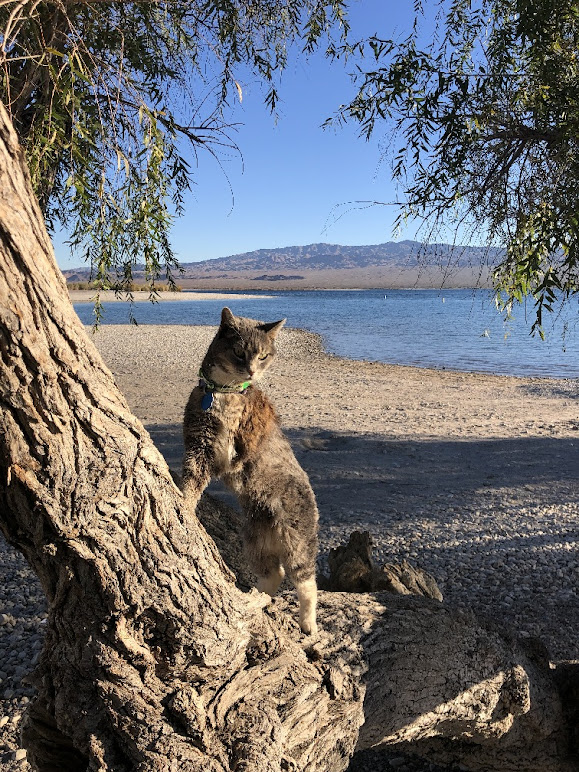 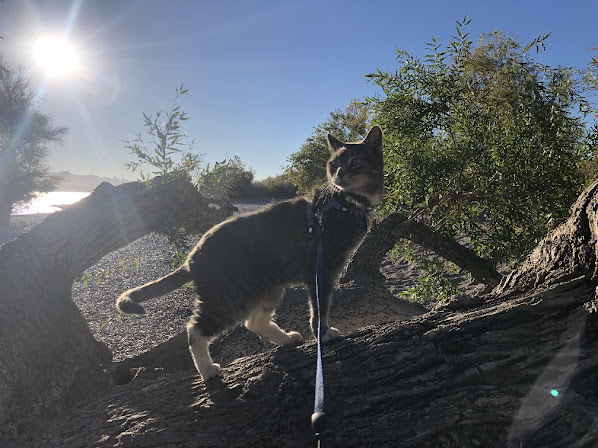 I took advantage of the trees as well, and hung up my hammock! 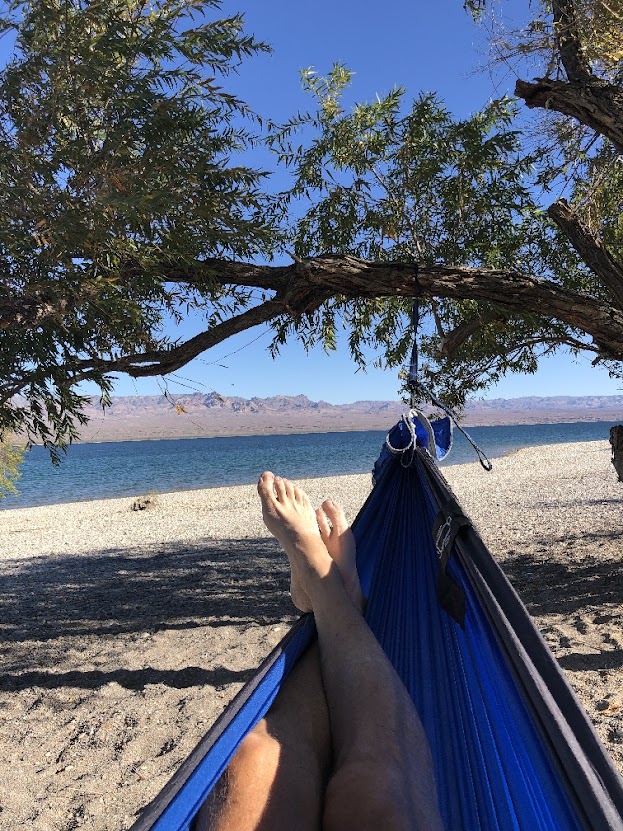 I slept in the hammock one night, and had some coyotes howling within about 40 yards, down by the water, then heard some rustling in the sand and spotted 4 raccoons walking right past my hammock. 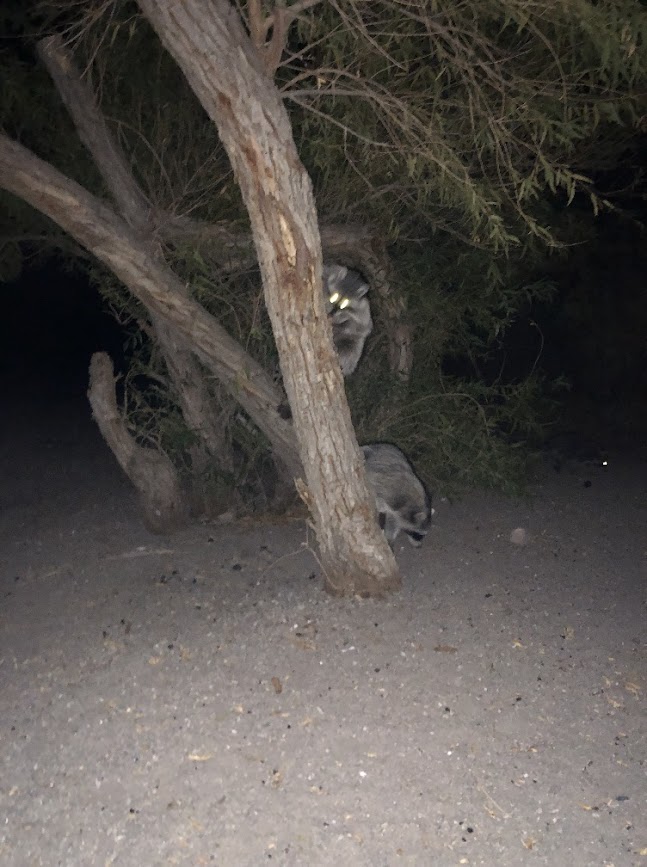 Other times, it was just sit back and enjoy the view! (And listen to all the reports of storms, avalanches and road closures around home.  Dang, I miss that!) 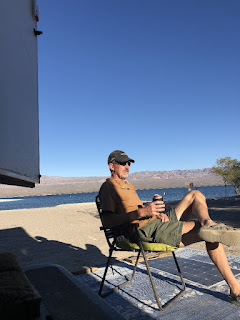 Despite the dumpsters, there is still a serious garbage problem here, so each day my neighbour Max and I would be out with our long handled tongs picking up broken glass, bottle caps, rope, clothing, tinfoil, plastic bags, and yes, even used diapers and toilet paper in the trees.  I picked four bags of trash from the beach, parking area and bush in as many days.

I'm always surprised to see grasshoppers on rocky mountain tops, and deserts without a blade of grass for miles.  This one was too cool in the morning to fly, so I managed to get a closeup! 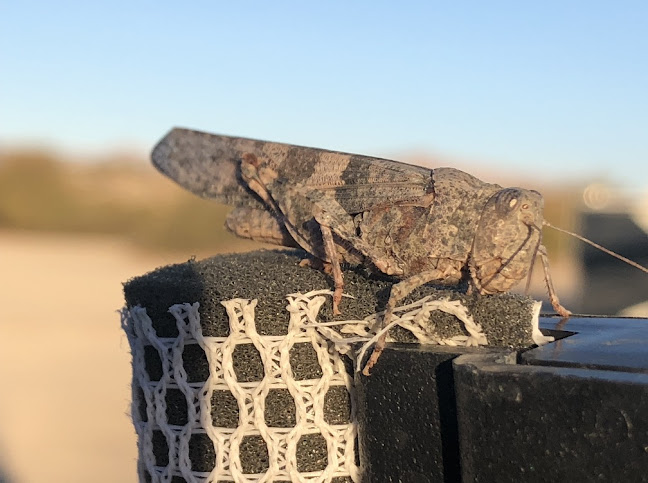 Thanks to friend and fellow traveler Ernie, they are  pallid-winged grasshopper (Trimerotropis pallidipennis), native to deserts of North America! 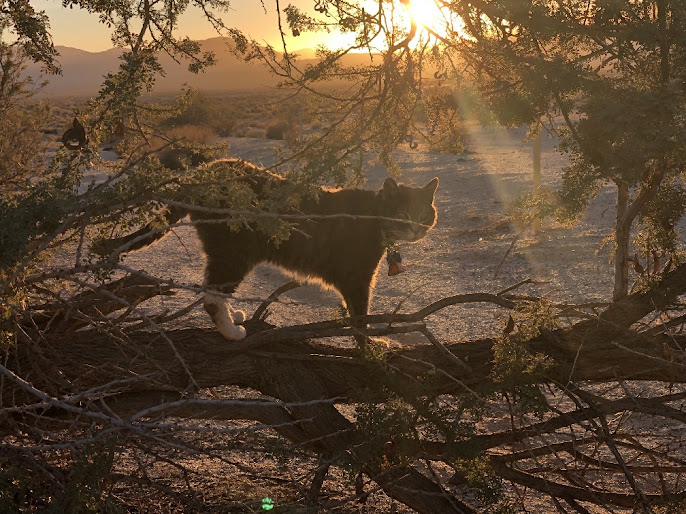