South of the 49th Parallel at last! 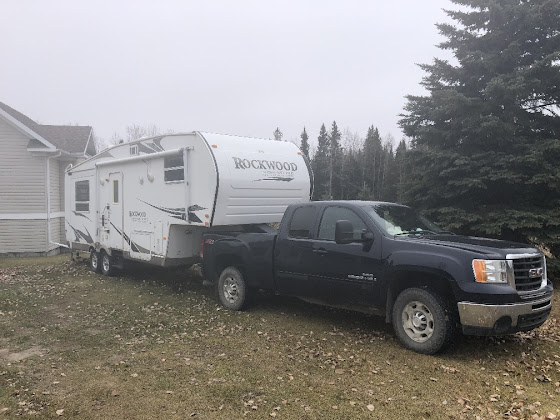 With three weeks to kill from the time the border opening announcement was made, till the border actually opened, there was plenty of time to get organized (and procrastinate) for the southern migration.  I doubt if I have ever been so well prepared - and impatient!  Since I have been using only the truck camper for all recent excursions, the 5th wheel needed to be brought back up to speed.
Batteries to be checked, fridge and furnace (never used) given test runs, see if the slides still work, stove, and moved the heater over from the truck camper.  Wiring checked and re-checked on the new 100W flexible solar panels and associated controllers.
Managed to get Hailey's vaccinations updated without anyone losing an eye or any blood.
Some of the tires were getting in fairly poor condition, and the spare was junk, so we hauled the rig into town to see if it still remembered how to tow, and to treat it to some new tires! 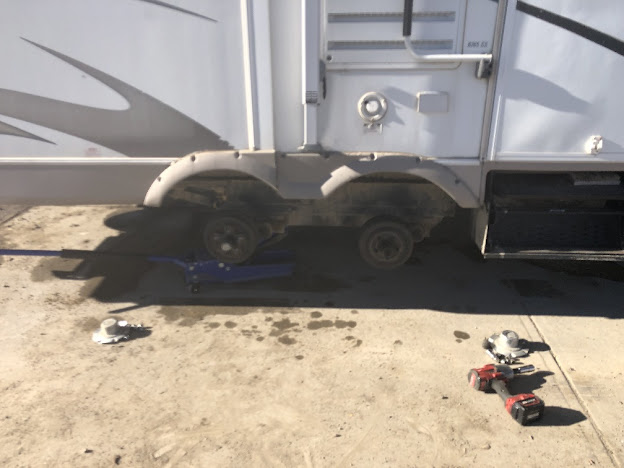 De-activated the home place, and spent the last night in the rig to make sure everything was up to speed.  Then, there was nothing left to do but pull out, and set up the high security gate to guard the place for the winter! 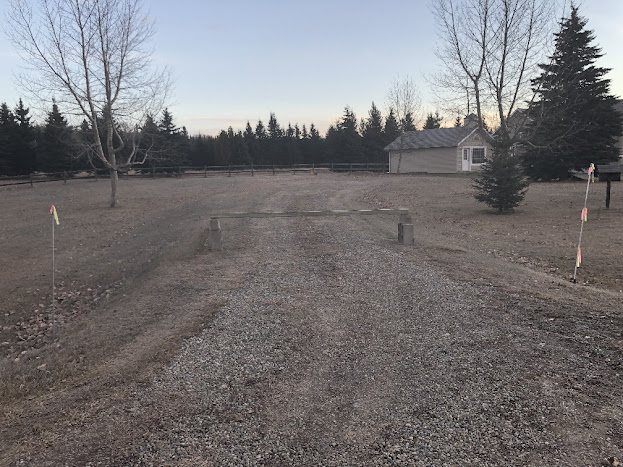 Still had a few days to kill, so we headed down highway 22 to Pincher Creek to check in on friends down there.  The highest winds were avoided, and a few world problems were solved.  Then we headed westbound, through the Crowsnest Pass, for the Rocky Mountains and British Columbia. 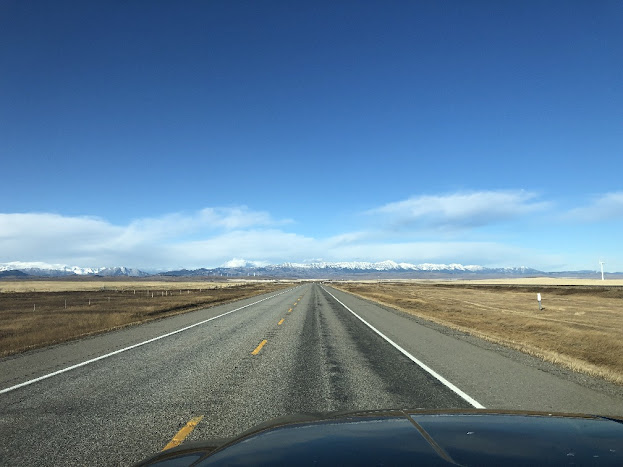 We pulled in to a provincial rec site for a night, so Hailey could get out for a bit - all while watching the snow line march ever lower on the nearby mountains. 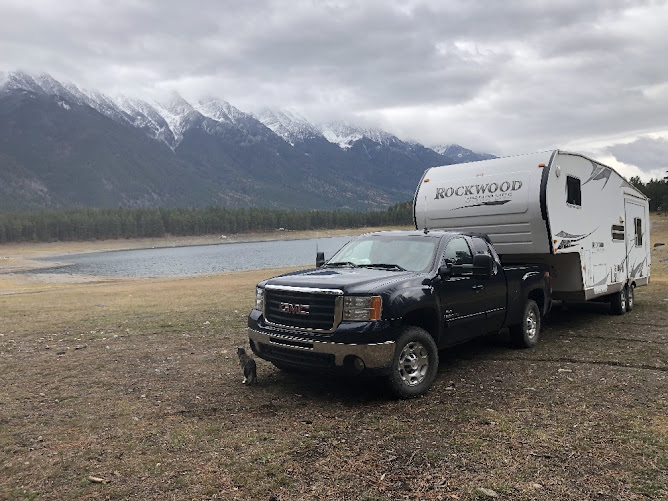 The final night on Canadian soil was to be spent with friends near Cranbrook, BC, with a run for the border at some uncivilized hour in the morning - to hopefully beat the rumoured hordes of RV's and RV'ers who were reportedly massing along the whole southern border in eager anticipation of heading to warmer climes.  Guesses were that getting across the border could take hours or days, while negotiating the Covid restrictions, etc.  But I got a quick message from Wandering Willy, out further BC way that the border might actually open at 9PM BC time, instead of at midnight as expected!  I had already attempted due diligence, and phoned the US customs border station a week ago where I wanted to cross, but of course, it is impossible to get an actual person to answer the phone.  So, with best guess in mind, Ms Hailey and I said so long and headed for the border.  It was a pleasant hours drive, much of it through blowing snow and poor visibility, just to let us know what we would be missing while basking in the warmth of a Yuma and area winter!

She had already gotten back into the travel routine and re-established her preferred lounging areas in the trailer. 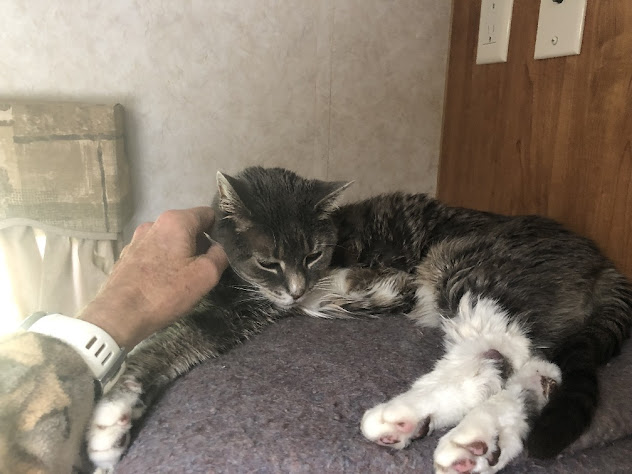 Much to our surprise, and contrary to a lot of the hype over snowbirds crowding the border approaches, we saw a total of two other rigs that might have been headed to the border!  There may have been more, but they were invisible in the lovely blowing snow!

There were no signs at the actual border, so we sat there and contemplated for a few minutes, wondering whether we should attempt the crossing and be turned back, or just go for it.  Another attempted phone call to the customs office we could now see - went unanswered.  So, with passport in hand and trepidation we went for broke.  Much to our pleasure, we were not turned back, and after a few of the usual questions on booze, vegetables and plans, "Oh, you're a snowbird", we were waved on through, and there was no one behind us!  We're off!

Because it was now about 10:30 at night (depending on time zone, daylight savings time, etc), and the periodic blizzards, we just drove about 5 miles into the US to the first roadside spot we could find and hit the sack.

It was a bit unnerving in the morning to see a speed plow go by on the highway, but a quick chat with the driver said that the roads were just wet, no snow.  So we carried on south through Bonners Ferry, Sandpoint, and Couer d'Alene, Idaho, then Spokane and southward to the Columbia River on the border of Washington and Oregon.  Looking forward to our 'usual' campspot on the river bank right by one of the locks, but was greeted by a new no camping sign as a welcome. :-( 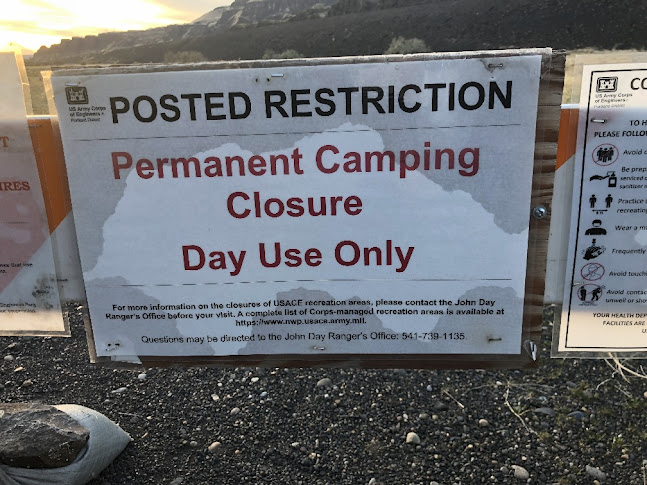 So, we moved to a scenic, but exposed spot on the side of the road, and we'll see where tomorrow takes us!  Nice to be back on my unlimited, cheap, AT&T data plan after almost 19 months!  Despite the rumours of mass migration, we only saw one rig all day from BC, and a couple from Idaho and Washington state.  I guess we're leading the charge.  Maybe more will catch up in the next few days?