Camping in the Revelstoke area!

The end of June was upon us, and it was time to hit the road again for another camping trip!  Last time, it was to Saskatchewan, so it was British Columbia's turn again!

Not being in tune with the calendar, I didn't realize that it was a long weekend coming up, so the traffic was a bit on the heavy side.  While Hailey has spent most of her traveling career in the front of the truck with me, she really hates being moved back and forth.  So lately, she has been riding in the camper, where she has access to her food, water, litter box, and a wider variety of places to sleep.  But on this trip, as we descended into Golden, the outside temps were approaching 40C, and it was just too hot for her.  I was surviving in the cab with all the windows down (I'd rather have fresh air than A/C), but instead of enjoying the breeze, I found her wrapped in blankets! So finally it was time for her to join me in the front with the air conditioner keeping us appropriately chilly.  I often use a spray bottle to 'mist' her with water in hot conditions, which she protests, but secretly appreciates!

From Revelstoke, we headed south and took the Shelter Bay ferry to one of our favourite off-grid camping spots.  Lake levels were extremely high as a result of all the hot weather, so there was no beach at all - water reaching right into the trees.  But at least with my inflatable kayak, I am able to get out on the water.

View out the back door! 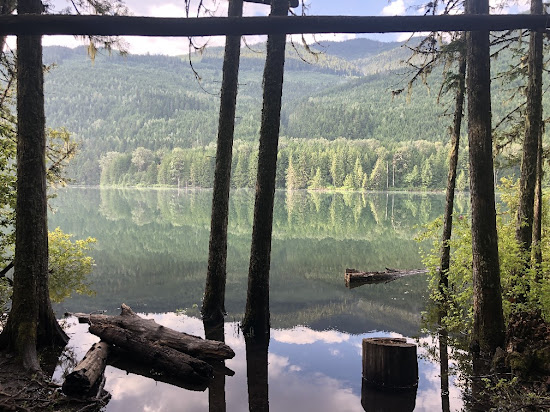 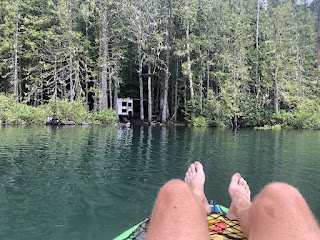 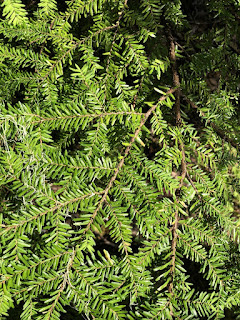 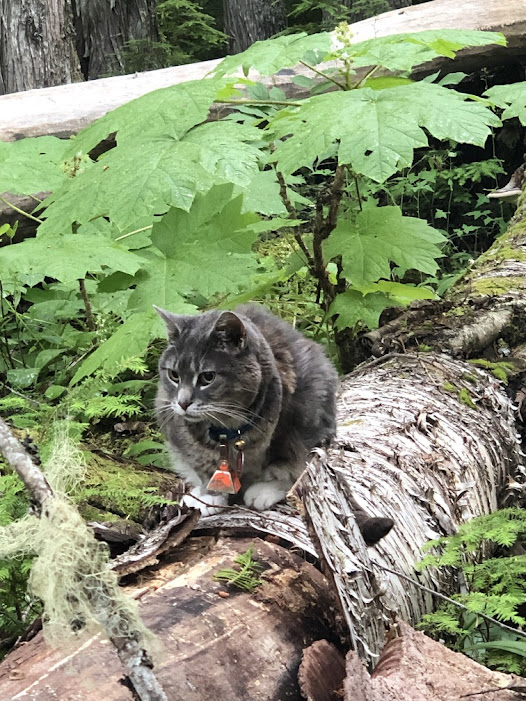 The weather was nice, so I slept in my hammock in the trees.  Fire hazard was high and there was a fire ban, so there was usually a daily visit from the local Fire Warden, as well as an evening visit from a couple of Conservation Officers - so we had a good discussion of people we both knew. 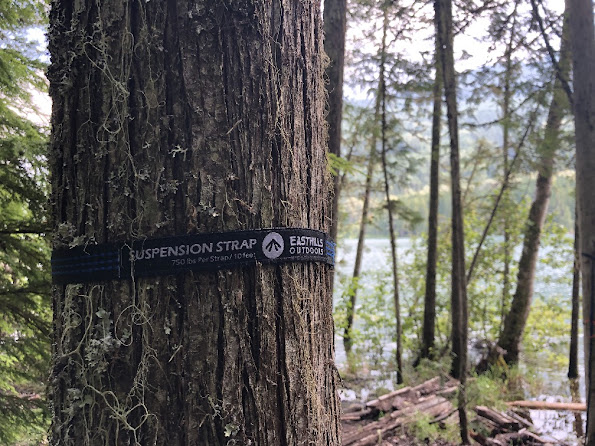 After a few days there, with no cell service, it was time to make contact with civilization again.  After a short stop back in Revelstoke, some reprovisioning, and coffee with another retired park warden, we headed out again, this time to the north. 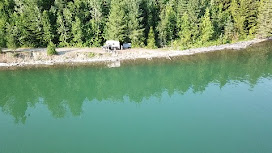 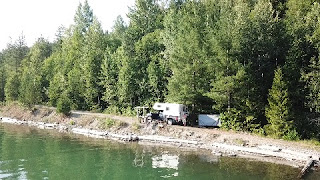 Revelstoke Lake stretches for over 100 km, and has a great variety of boondocking spots, as well as a provincial park campground, and a couple of designated recreation sites.  Over the years I have camped at a lot of them, but am still discovering new and better ones every time!

There is active logging occurring on both sides of the lake, so there are several of these barges used to ferry logging trucks and equipment to the far side of the lake. 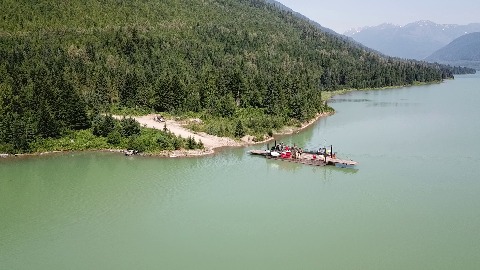 Unlike many lakes in BC, there are essentially no cabins or other developments along it's hundreds of kilometers of shoreline. 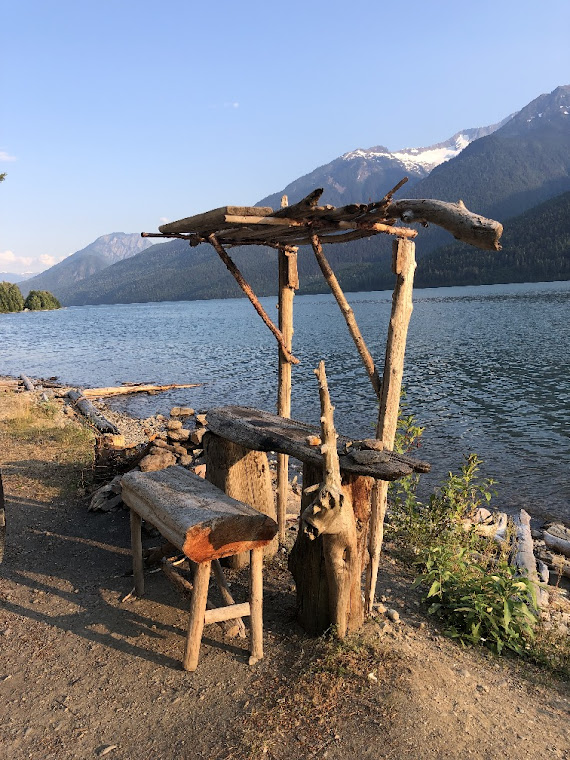 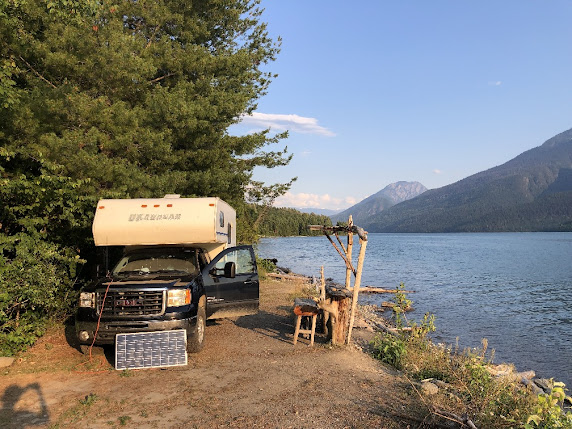 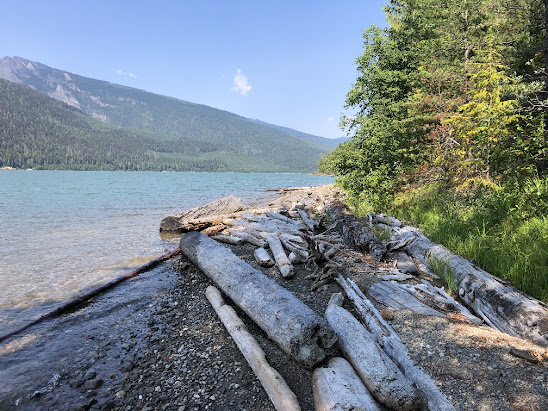 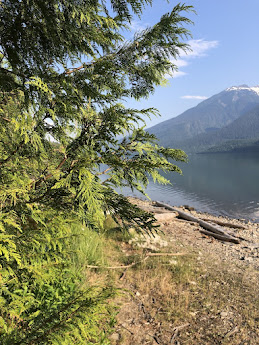 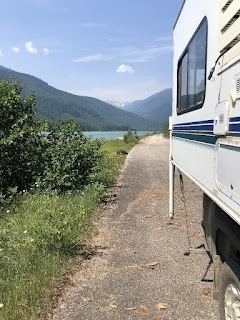 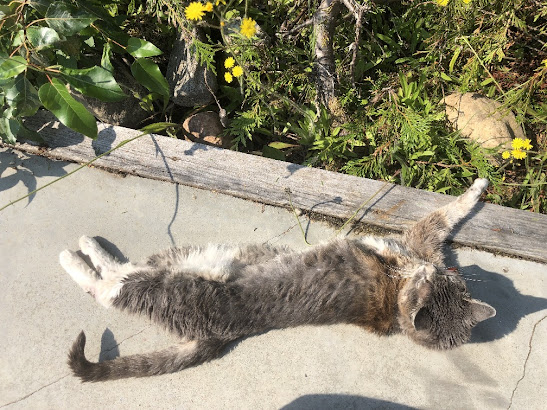 Fire hazard was still extreme, and we were camped at the very north end of the lake when a lightning storm passed through.  As I watched one evening at dusk, a huge bolt of lightning hit the slope just down the lake from me, and sure enough, a few minutes later, a relatively large area was in flames!  As a fire lookout, I have seen this quite a bit, but in this case the area burning appeared larger than just a single tree.  I debated breaking camp and trying to find some way to report it, but then realized that no one is going to take action on it till the morning anyway, so I may as well wait and see what developed. 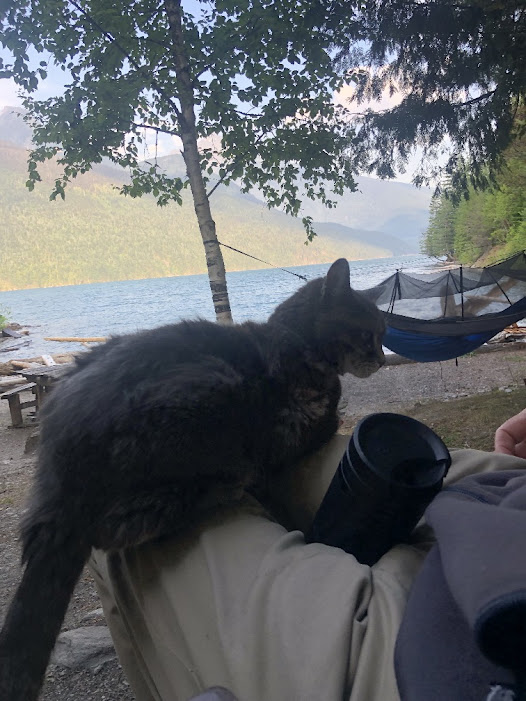 Sure enough, in the morning I could see nothing there, even with binoculars.  But I know that these fires can easily smoulder in the ground for hours or days till conditions are right. With no cell service withing 120km, I set off in search of some way to report it.  There were some other fires in the area, and I had seen a small cluster of tents just north of Mica dam (BC version of a fire camp, I guess!), but no one was around there, and I did not see any Forestry vehicles.  I stopped in at Monashee (heli-ski and hiking) lodge, sure they must have some sort of communication - but there was no one around!  I was trying to send a Facebook message to Forestry - using their wi-fi when a fellow walked up from the direction of their heli-pad.  Sure enough, he was a helicopter pilot working on the area fires!  So I was able to pass on all the relevant information to him, and showed him where to expect fire that afternoon.
A couple days later, another Fire Warden visiting my camp confirmed that my reported fire had indeed become an official wildfire, and it showed up on their fire app, when I eventually got back into cell coverage. 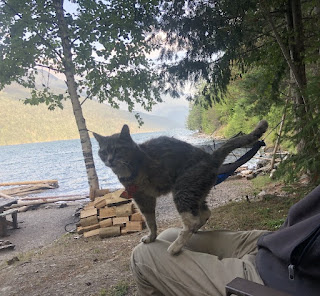 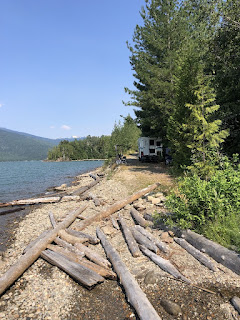 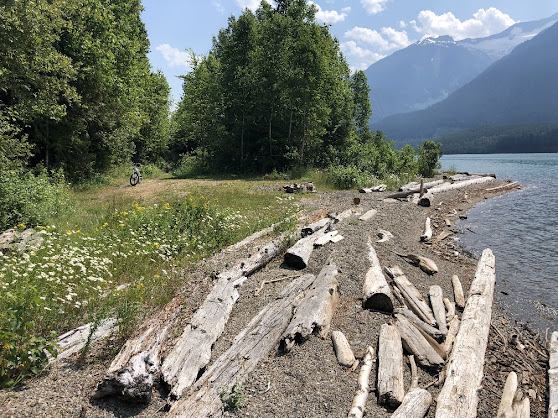 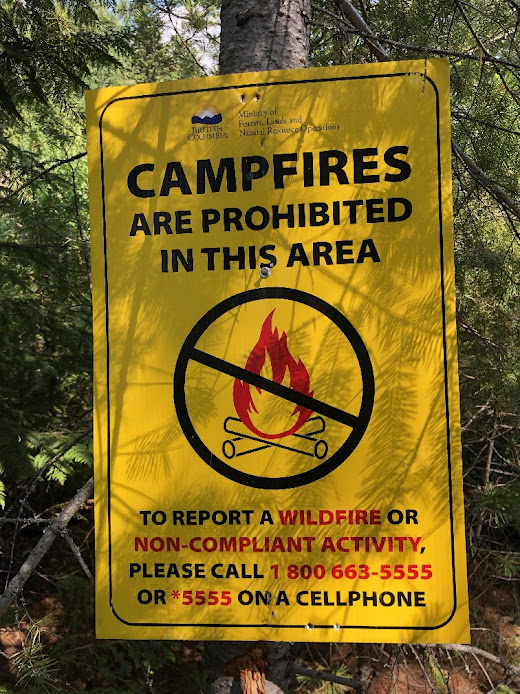 The north end of the highway is being re-paved presently. I guess this is for access to the dam for maintenance etc?  It certainly makes access to all the great camp spots easier.  Ironically the pavement ends just past the dam, and 200 yards further down the rough gravel road is a sign saying that that's the end of the road!  So essentially, the road is paved - to nowhere! 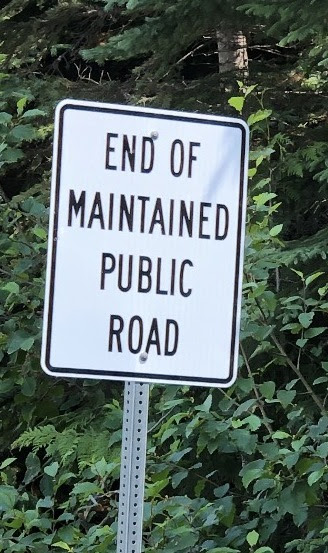 There is a very rough forestry road past that point, including some rec sites, but I still find it quite ironic, and possibly a wasted expense? 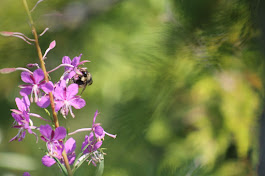 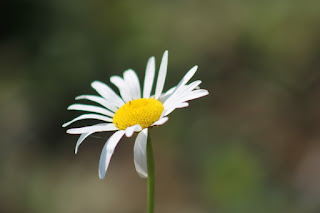 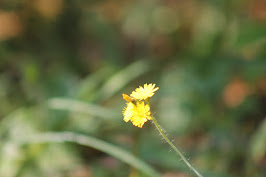 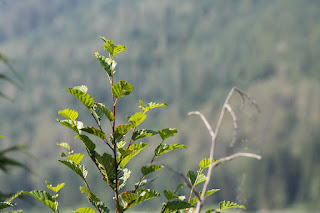 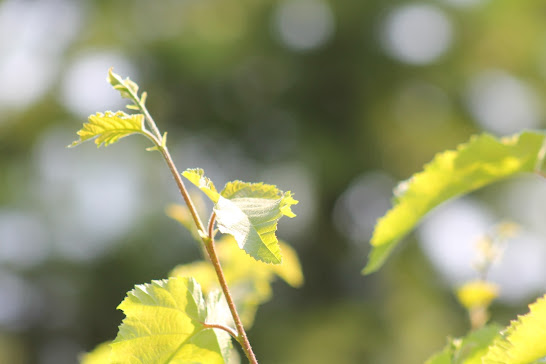 Mica dam, at the north end of Revelstoke lake. 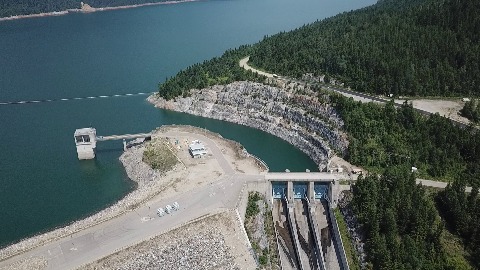 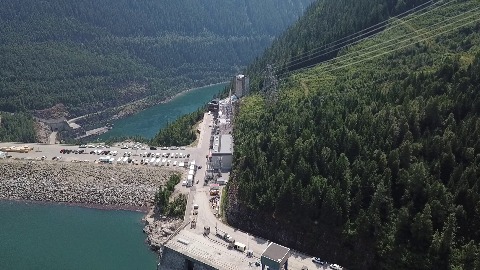 Where are we off to next?  Stay tuned! Hint: Hailey says we haven't been to Manitoba in at least 10 years!

Spider - on the world wide web! 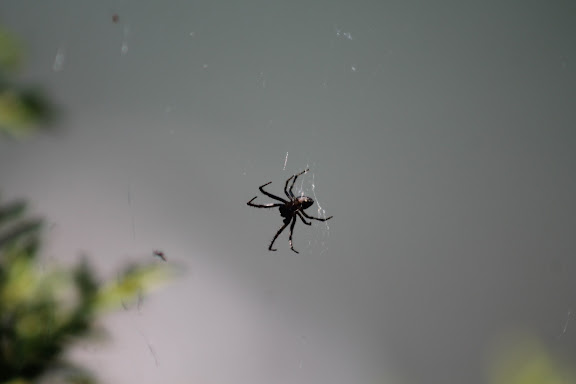