Getting caught up - and poked.

It's been a while since we blogged, so this is the start of trying to get caught up!  Hopefully, there will be several posts before we get to the present.

After spending the month of March camping on Vancouver island, we were back at home for most of the month of April.  My new double camping hammock was waiting for me on my return, so it wasn't long before it was tested, even in some sub-freezing temperatures. 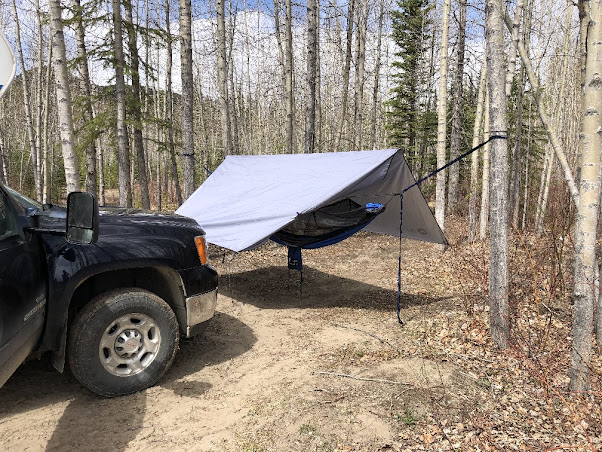 Vaccines were available, so that was at the top of my list of things to do.  I got my first Pfizer shot.

I ordered an e-bike from Amazon on Friday, and was surprised to get a phone call on Saturday.  I thought the call was likely a tele-marketer as I didn't recognize the number.  But no, it was the supplier of my e-bike, offering to deliver it in person the very next day!  And they did, and it was!  I met the supplier who turned out to be from Calgary the next day and had my bike, no Fed-ex involved!

Got to try it out the next week while camping at still frozen Abraham lake with Don & Donna. 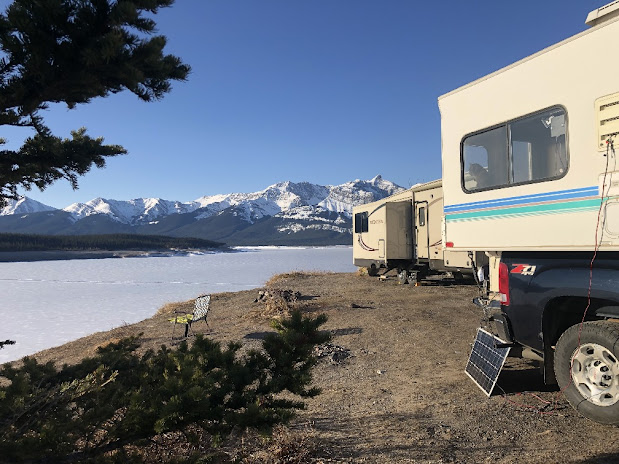 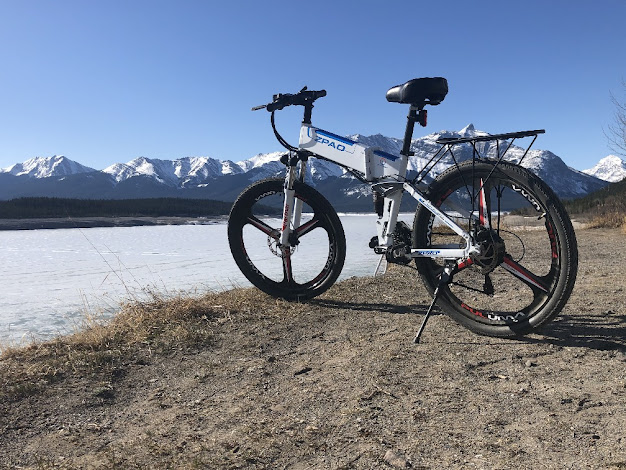 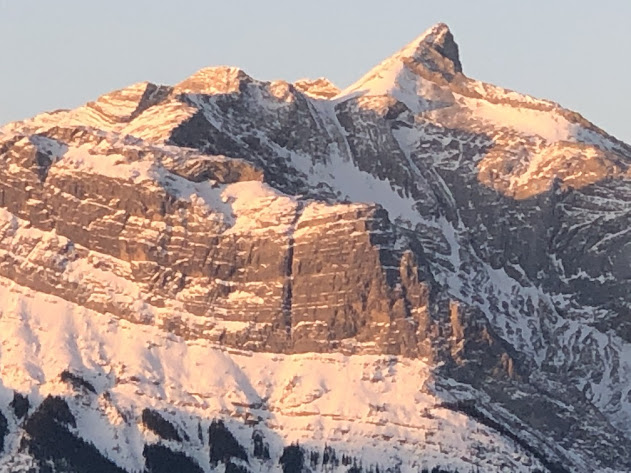 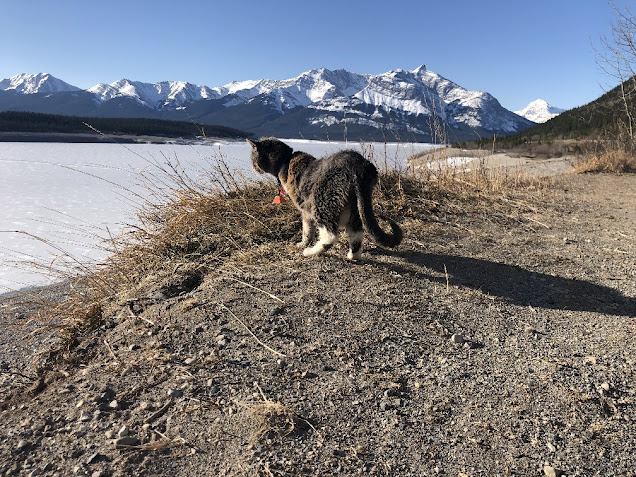 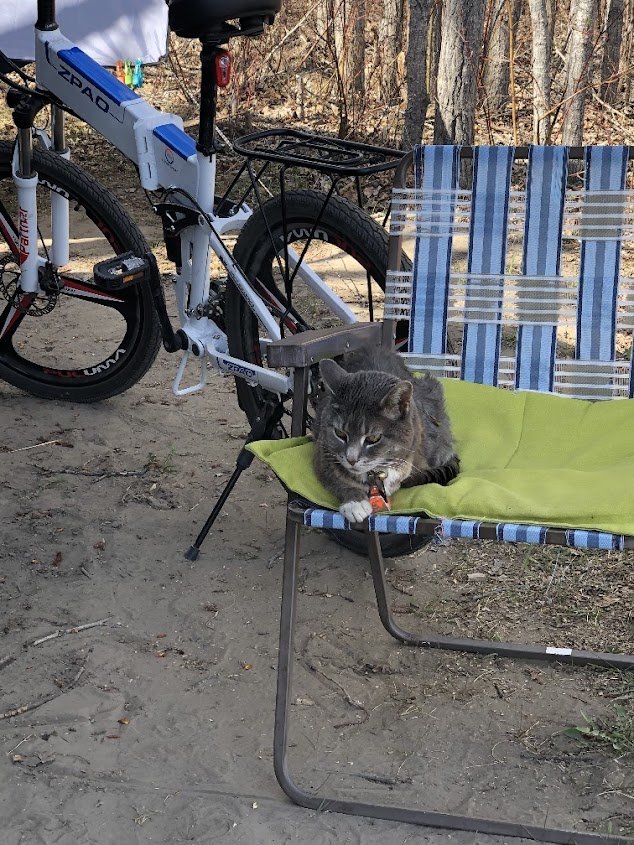 I was glad to see that I had no problem re-charging the bike battery from the small 400w inverter in the truck camper, with one or two of my 100w solar panels out.  The bike folds in half, so it fits easily in the back seat of my truck. 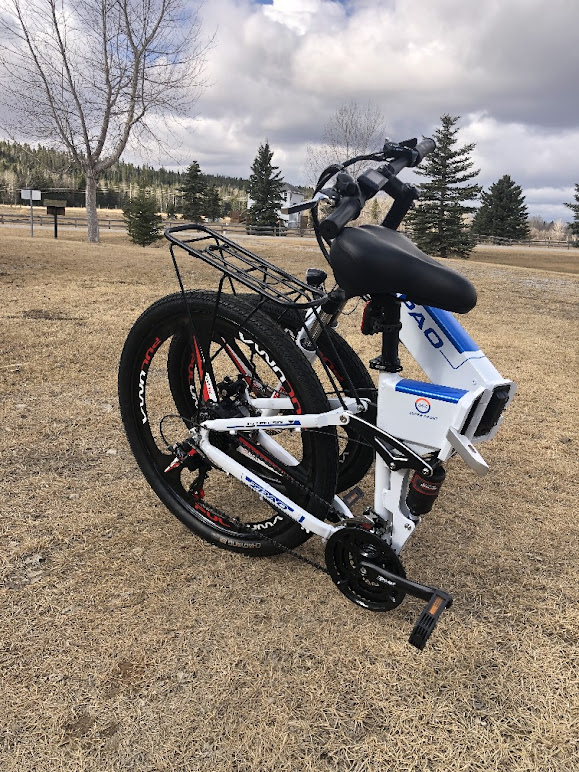 Checking out some 'artistic' mud splatters on the door of the truck ... 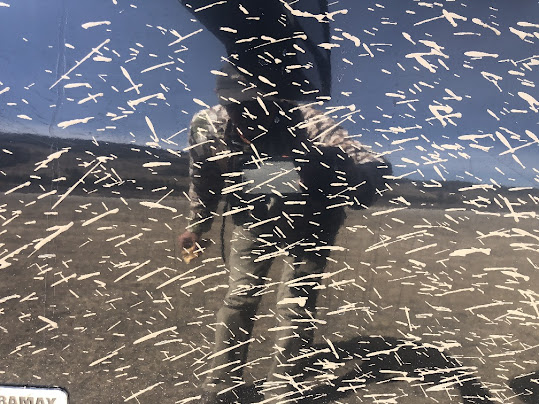 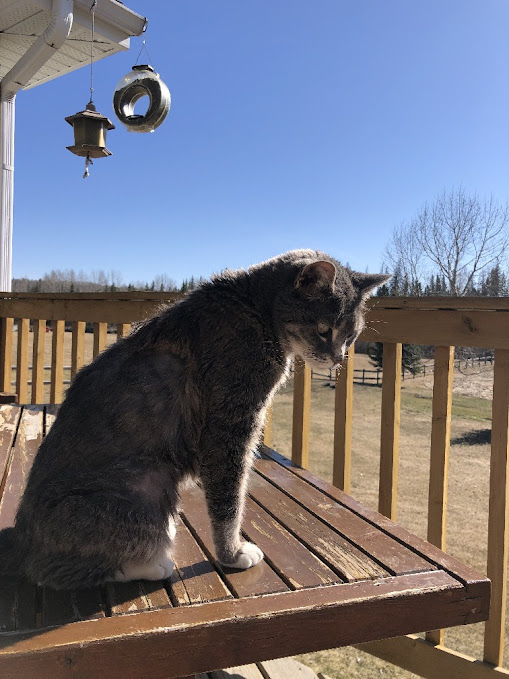 As is common in Alberta in the springtime, there was a nice little snowstorm to remind us that summer was not quite here yet! 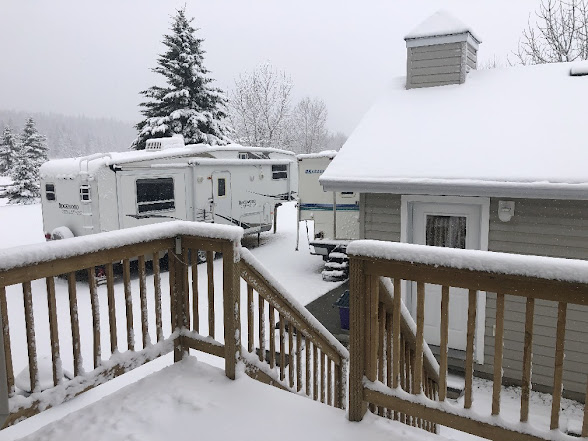 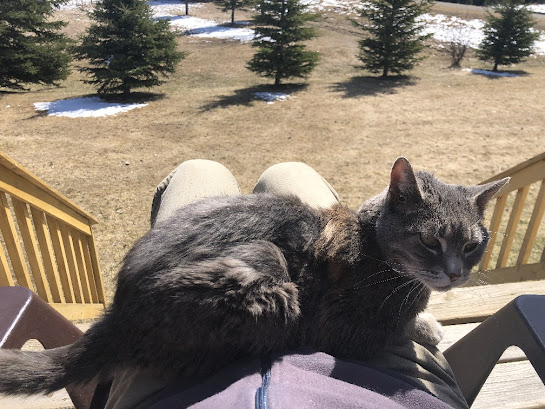 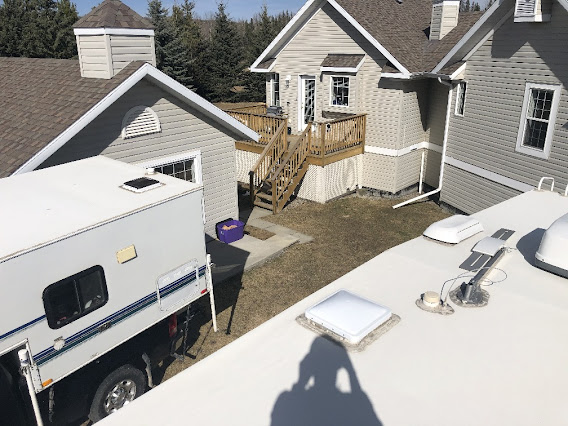 Thrilled (!) to find a new crack appear all on it's own on the front cap of the 5th wheel.  Same thing happened when the rig was brand new, but that one was replaced on warranty.  Now, replacement caps are no longer available.  Gorilla tape to the rescue! 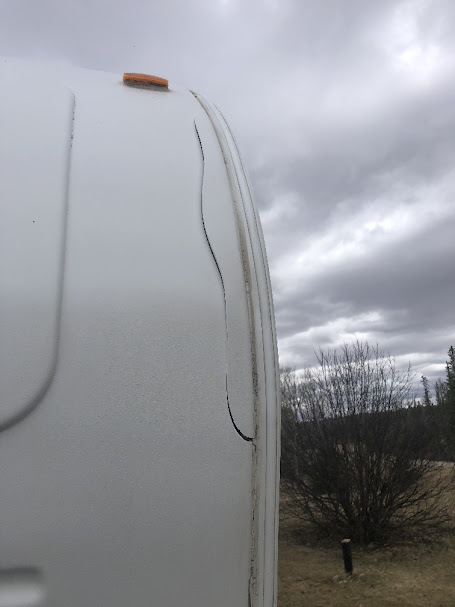 Early May brought more snow :-(  But more and more birds were showing up, including my large squadron of cliff swallows that nest under the edges of the roof on the house.

In early May we took off for a short tour around central Alberta, including some historic coal mining equipment on display near Forestburg. 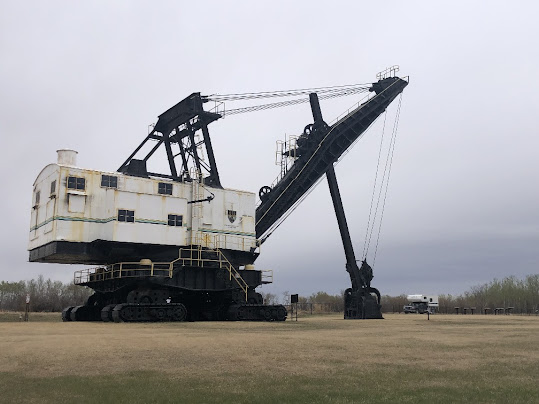 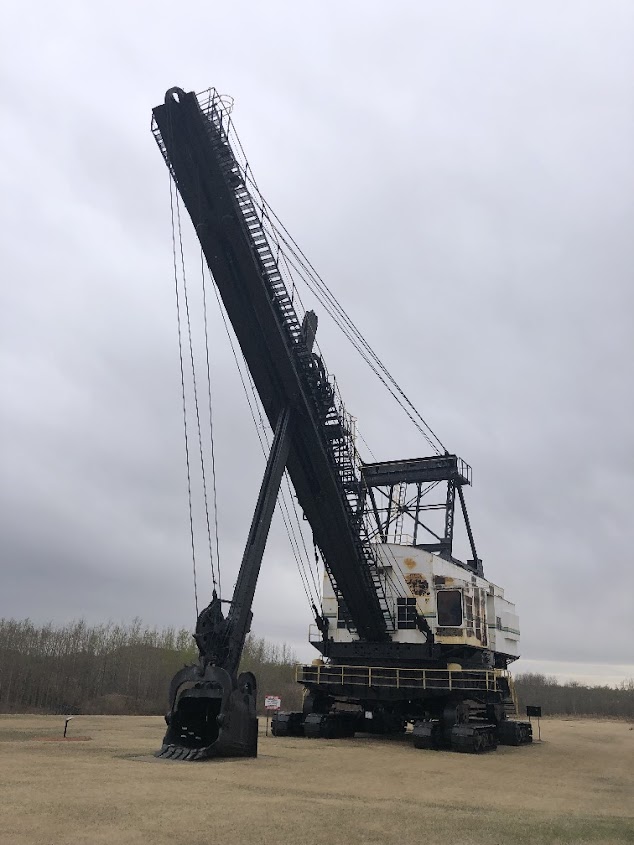 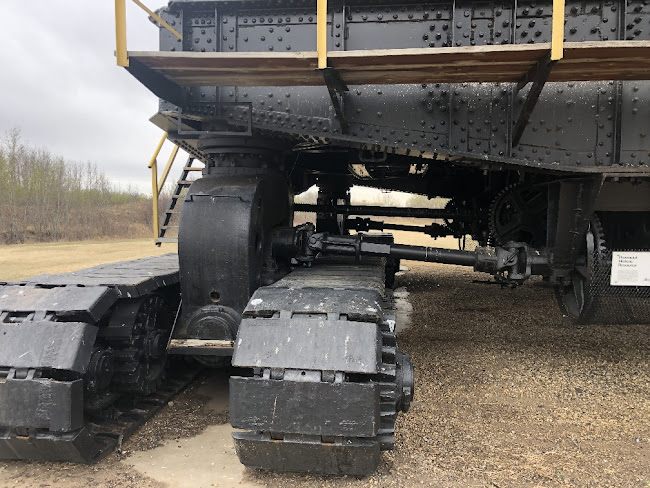 After touring around the Drumheller area for a bit, we headed to Calgary, where Hailey had an appointment with  her dermatologist, and got an ultrasound and blood tests, while the vets continue to try and figure out what makes her tick.  And hiss.  We're getting pretty good at sedating her prior to her visits - so no one gets hurt.  Results were inconclusive as always, but at least she is not getting any worse.  It was a cheap visit at only around $1200.  Just so she didn't feel bad, we stopped on the way out of town and I picked up a new higher end gaming laptop, as my old machine was starting to cause problems more often than not.  I don't do games, but I wanted something that would be able to handle a bit of video work on occasion.

In mid May, we packed up again and headed out to our favourite local camp spot, only about an hour from home, along the Clearwater River.  Leaves hadn't come out yet, but the beavers had been doing their best to clear some trees for better views! 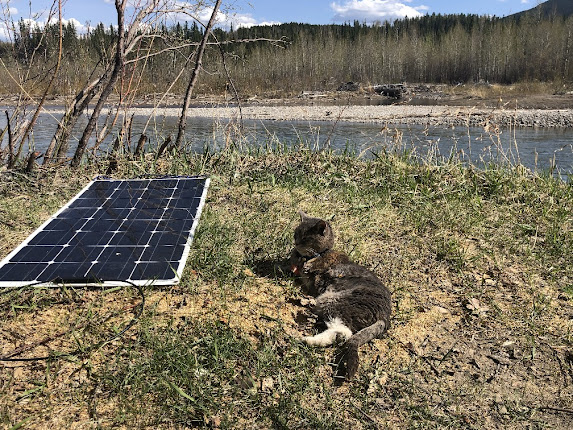 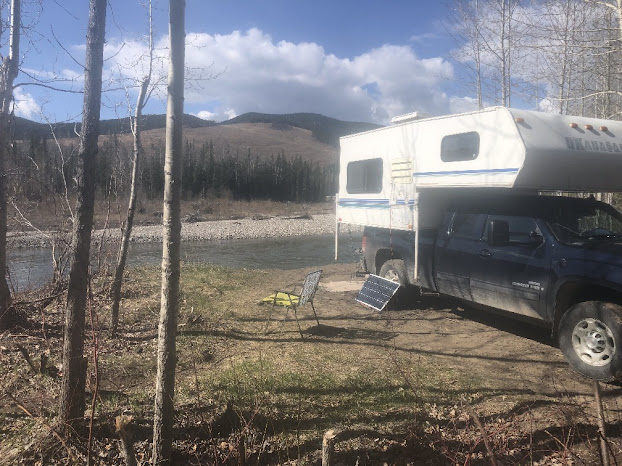 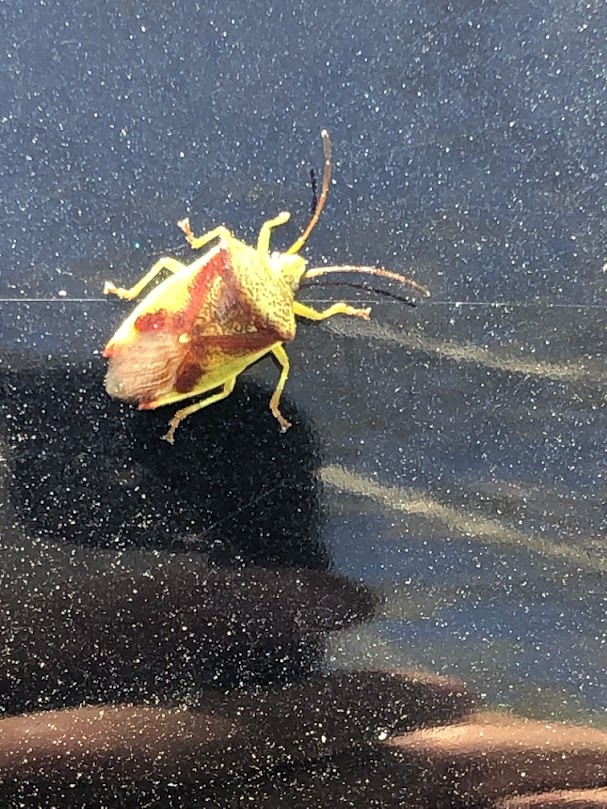 Lots more to come, when I find the time!  Trips to Prince Albert National Park, and lots of camping in British Columbia.