After almost 5 months in the (mostly) warm sunny, south, it is inevitably time to consider heading for the Great White North!

Of course the elusive Wandering Willy has been back in BC for a while now, as have Jean & Skip, and even the Bayfield Bunch have made the long cross continent journey back to Ontario!  I know that Wheeling It are nearby, and our paths almost crossed a few days ago – but I’m getting ahead of myself here …

One option would be to work our way up through Utah or Nevada, eventually ending up somewhere on I-15 headed back in to Alberta.  Colorado and Wyoming are still way too cold to consider at this time of year.

The other option is to follow the coast in some fashion.

Checking the weather forecasts showed that some of the possible contenders like Ely Nv, Monticello Ut or Whitmore Hot Springs Ca still had some regular or constant sub-freezing temperatures at night.  We know that we’ll have some of that at home for a while, but why endure that now if it’s not really necessary – and if there are very scenic alternatives! 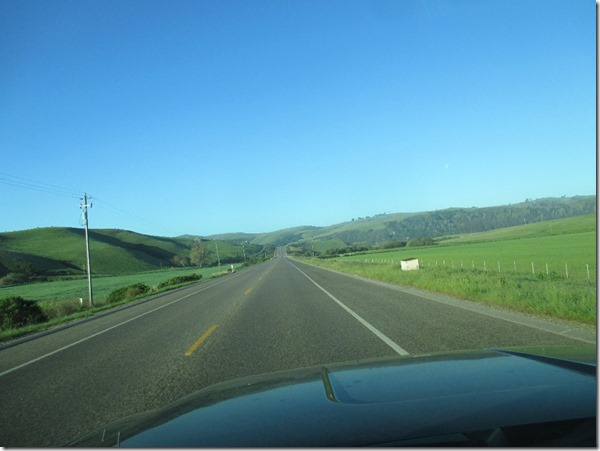 With that in mind (and map), Hailey said ‘so long’ to her lizard friends at Kelso Dunes in Mojave National Preserve, and we were off.  But not before having to resort to the ‘backup’ air compressor to top up one tire that seems to have a very slow leak.  Everyone knows that a good boondocker should have at least two air compressors, a soldering iron or two, drills, saws, glue and all make of tools and parts because you just never know when they’ll come in handy!  I proved this leaving Kelso Dunes when my first air compressor gave up and refused to pump anything more than 44lb when I’m asking for 80!

With the decision made to head for the coast, we were off in a flash – right after coffee. 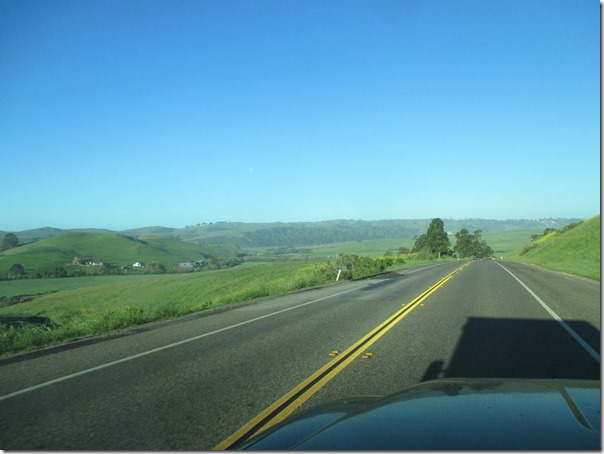 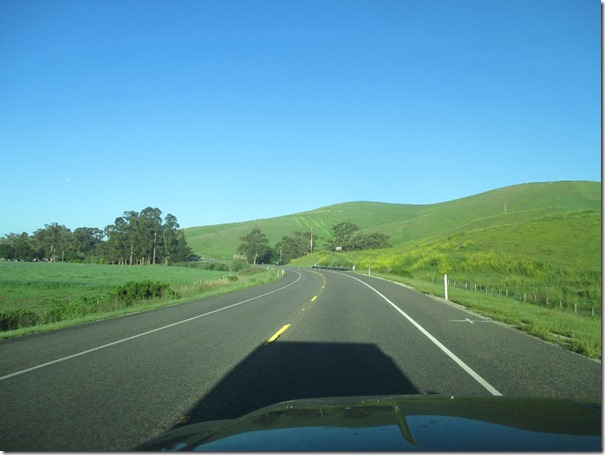 Onward into the setting sun we went, rolling down into Paso Robles on diesel fumes.  After fixing that issue we soon on the roll again westward till finding a spacious roadside pull off that proved to have a distant view of the ocean, once the mist cleared.  And what a change!  After all the browns and greys and dull greens of the desert to the lush green fields and trees in full leaf and bloom near the coast.  And that first breath of moist ocean air – what a rush.

In the morning sunshine with a fresh coffee in hand, it was an easy coast down to the coast at Cambria.  Again the first blast of ocean air was the best.

Hailey was impressed too, and couldn’t wait to get out and see what sort of critter she could hunt here! 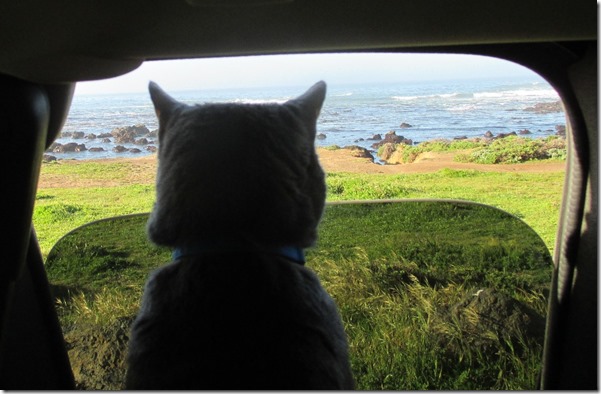 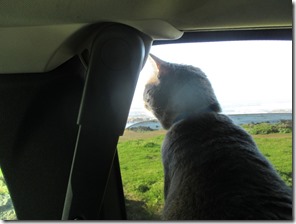 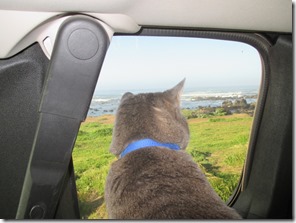 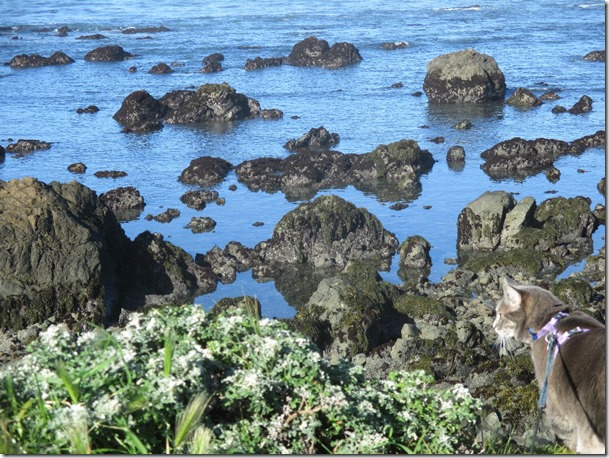 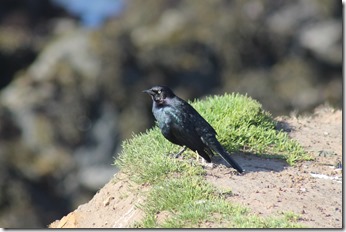 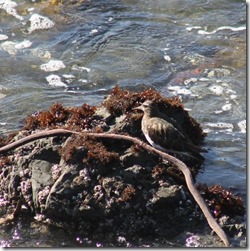 There were a few seals in the water 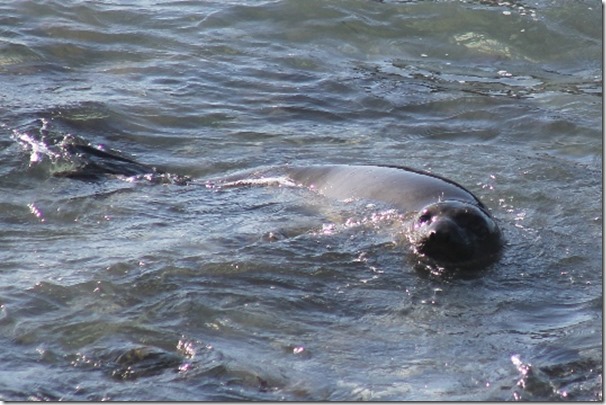 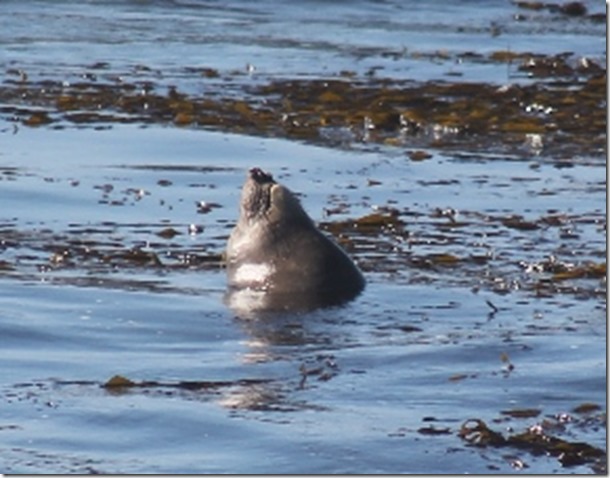 There was even a mermaid on the shore! 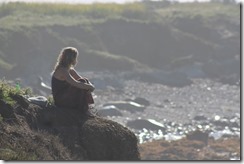 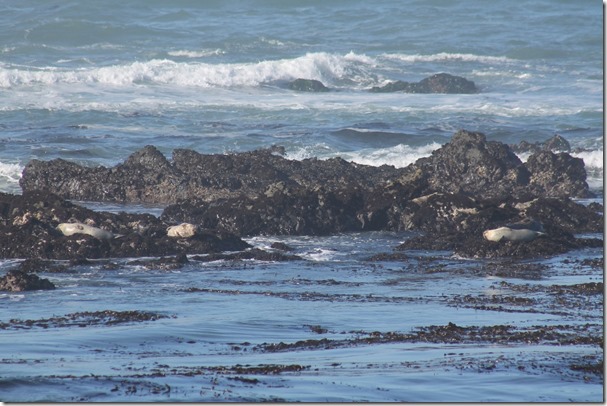 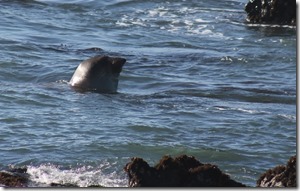 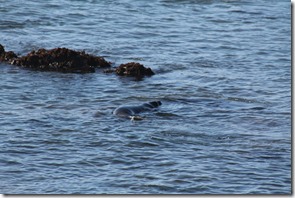 Just up the coast there was the imperative stop at the Elephant Seal viewing area – in spite of the discriminatory sign banning units of over 30’ from parking there!  What the? 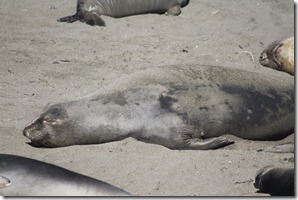 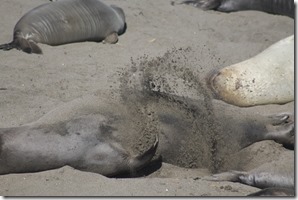 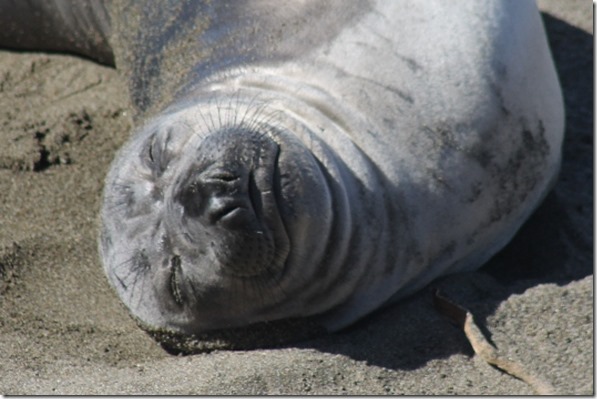 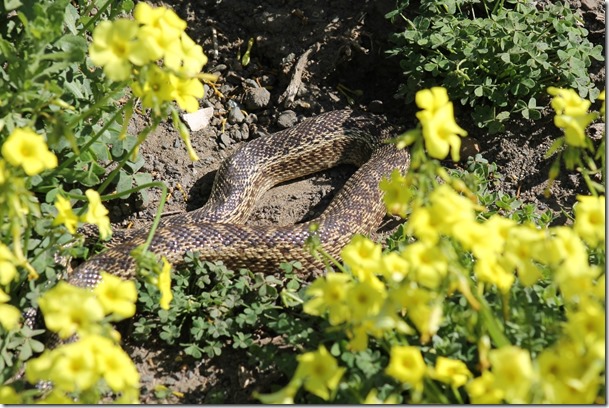 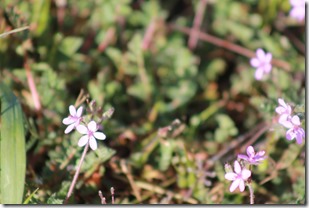 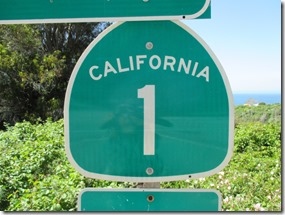