Marooned on an Island!

We enjoyed the time camped at Elk Bay rec site on Discovery Passage, north of Campbell River.  The weather was a mixed bag, and even when the sun was shining, the tall trees to the south blocked much chance of solar.  Plus, it was time to replenish the propane supply!  So we headed back into Campbell river briefly. 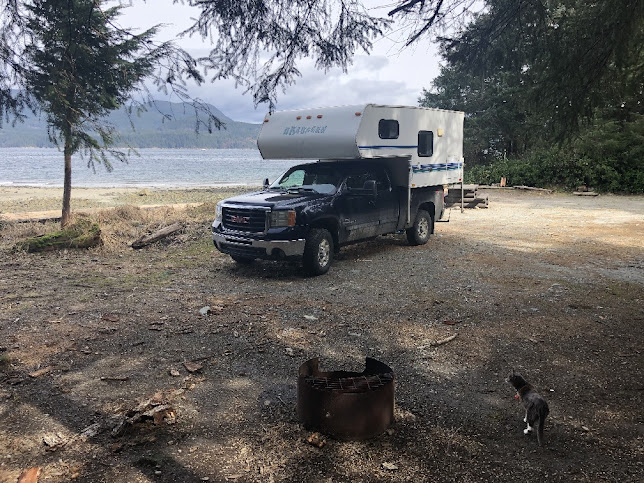 With no real plan of where to go next, we headed back out to Lower Campbell Lake by a different route.  We found the preferred spot at Burnt Beach vacant, so gladly moved in, and managed to get close to level.  We had to go through this very solid looking gate along the way. 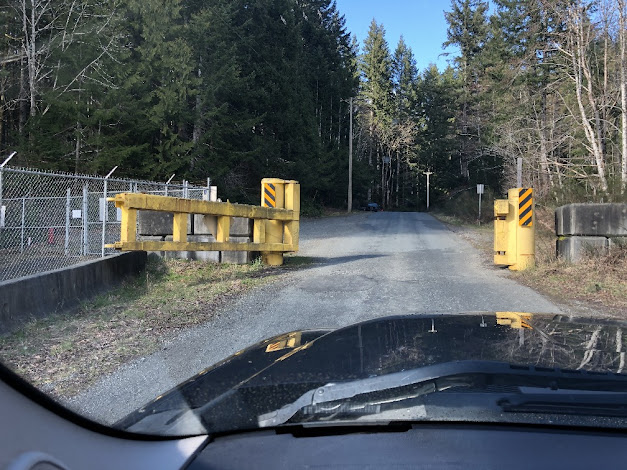 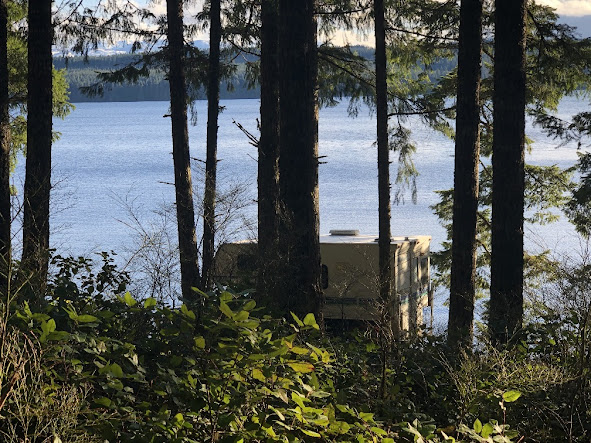 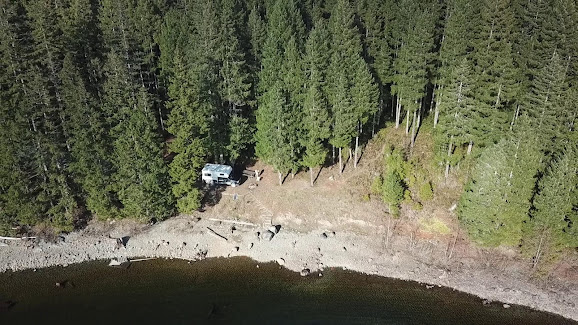 Ms Hailey has been eyeing up a lot of the trees around here, trying to decide how best to climb them with 3 legs.  Well, she surprised me by climbing up about 5 feet, and hung there a while before deciding to retreat.  She was too fast for a photo though.
(Video of camp spot)
We spent three nights at that rec site.  It was wonderfully peaceful and quiet, like most of my camp spots have been on this trip.  We debated going further north on this trip, and finally decided to go for it.  Some of the rec sites along the highway were marked as closed, so that usually means a gate, so we avoided those ones.  We did go south of Woss and checked out the one on the north end of the lake, but it was heavily treed, quite uneven, and most importantly was pretty much full of what appeared to be long term or permanent residents, possibly working in the area?
Last summer we had checked out a site on the very south end of Nimpkish Lake, but after a very long, overgrown dirt trail, it was found to be very small, with hardly room to turn the truck around. So it was easy to skip that one this trip.  But the map showed another one just up the lake a ways.  Most of these spots do not have signs on the highway, so you have to try and figure out how to get to them.  After going down an unmarked road, it was a pleasant surprise to find a long, narrow rec site along the shore of the lake.  My map showed it was called Kinman Creek, but the sign at the entrance called it Nimpkish Lake rec site, so we'll go with that, I guess.  It was a great spot, stretched out for about 500 yds along the shore with all sites right on the water.  There were a few rigs present, but there is enough room for good separation and privacy.  I even managed to heat up my solar shower ... :-) 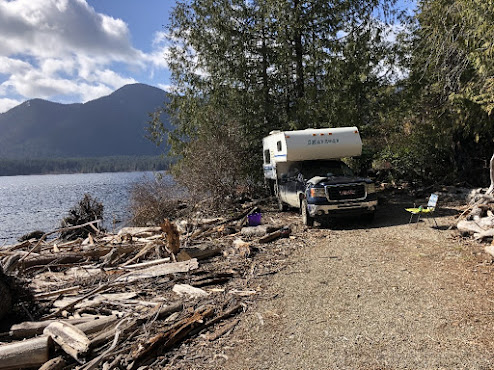 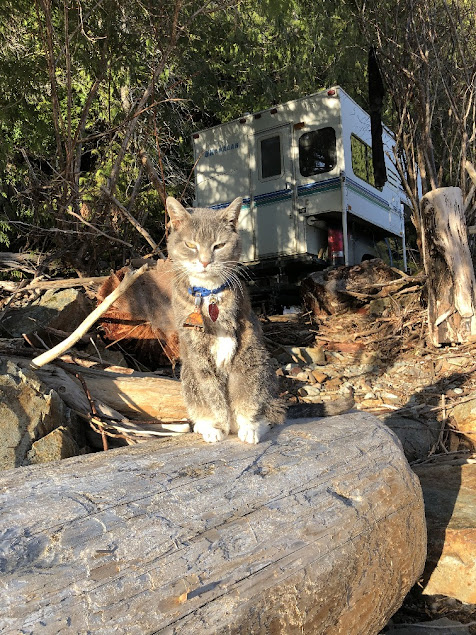 I had some beach wood with me from Elk Bay, but even after split it seemed a bit wet, so it was nice to find literally tons of mostly dry driftwood just waiting to feed the fire! 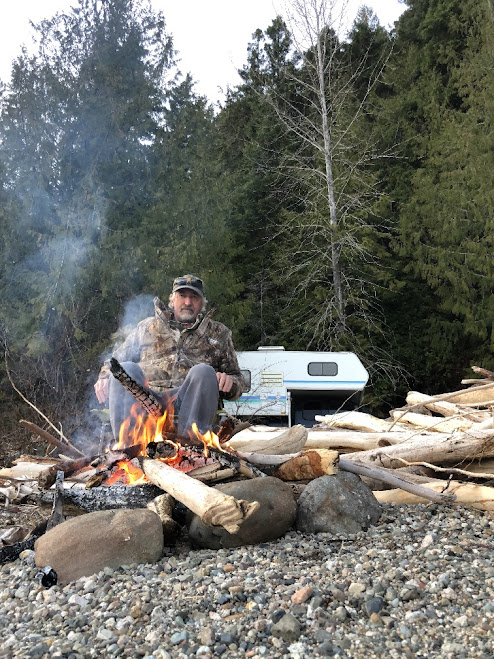 It was tempting to stay more than a night, but morning proved cool and cloudy, so we kept on heading north.  I hadn't been to Port Alice in a while, so that's where we headed next.  Marble River rest area and rec site was a good place to stop for a break, but the rec site itself was gated and closed.  It looked like there had been some recent extreme winds and a lot of blowdown in the area, so I suspect that is why it was closed.  Onward into Port Alice for a look around.  An attempt to go south of the closed pulp mill south of town was discouraged by very poor road conditions, so backtrack it was. 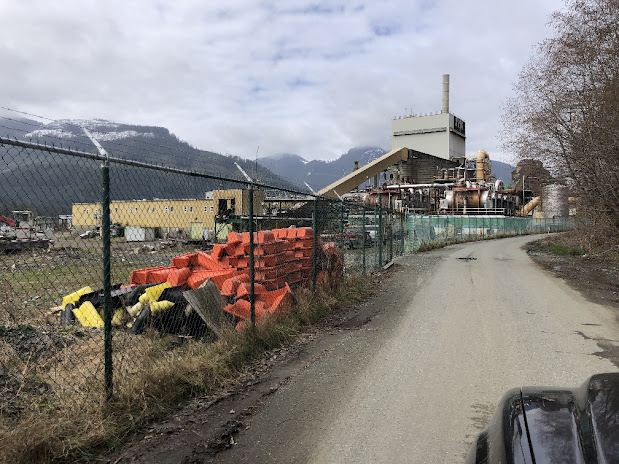 The pulp mill appears to have been closed for years, but there is still security and workers around, so I suspect they are starting to dismantle it, or reduce it's impact on the environment, etc? 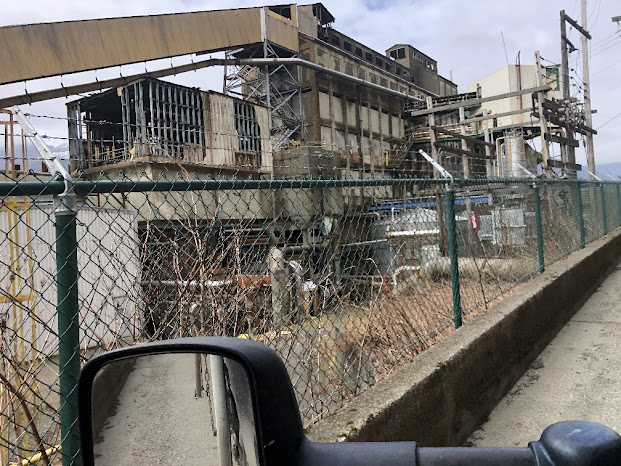 Heading back from Port Alice, we took another logging road leading to the end of Rupert Inlet.  Many of the roads out here have signs warning of active logging traffic, and are radio controlled for commercial users.  Recreational users have to use lots of caution to avoid getting run over!  I usually scan multiple radio frequencies when on these roads, and I have my amateur radio I can tune in and talk back if necessary. 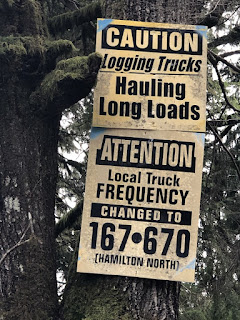 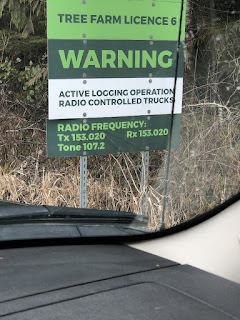 The map showed another rec site there, and we did find a couple of long-abandoned outhouses, but it seems like this one is no longer in official existence.  It does not appear on the official Recreation Sites and Trails BC website, so I guess that is the case.  Notwithstanding, there is enough space for a number of rigs, with great views of the inlet.  Skies were overcast and grey, but we set up and had another peaceful night with ocean view. 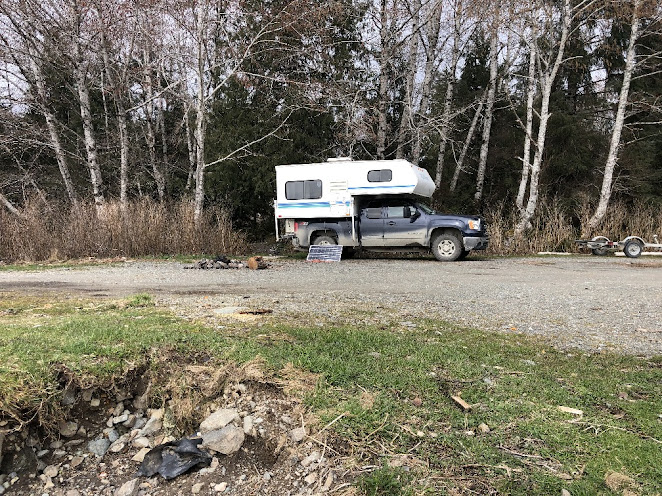 With no solar about to happen in the morning, we continued on into Port Hardy. 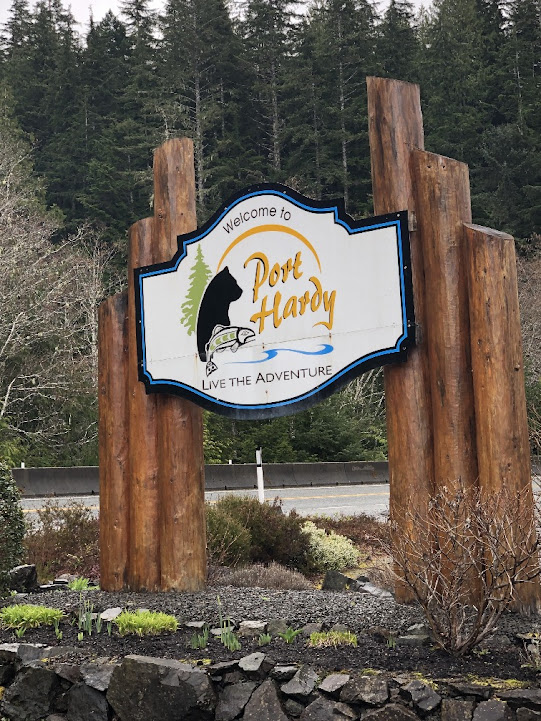 Ate breakfast on the waterfront, before heading out to check the Georgie Lake rec site.  Found it had too many trees and a bit too rough with only marginal lake views.  Next, we hung out near the ferry terminal, watching the ferries come and go, while getting caught up online.  One ferry departed, then returned and docked again 15 minutes later! Trouble, or just crew training?

Then we headed back to Port McNeill, where there is a spot right on the water with great views, but still close to town.  Weather was a very mixed bag; driving rain, brief sunshine and calm, then howling winds, more rain.  At high tide the waves in this relatively sheltered area were crashing within 20 feet of the rig.  With no better weather in the forecast, it was time to just hunker down and enjoy the occasional break for Hailey to get out and explore.  The sun really tried to come out on the final morning as we departed for points south. 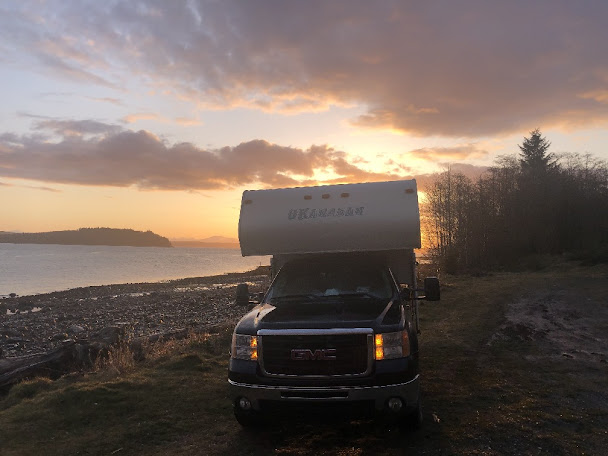 There are some higher elevation sections of the road as we moved south past Woss and Sayward.  It was easy to see that the rain we had received down at sea level was heavy snow up here. 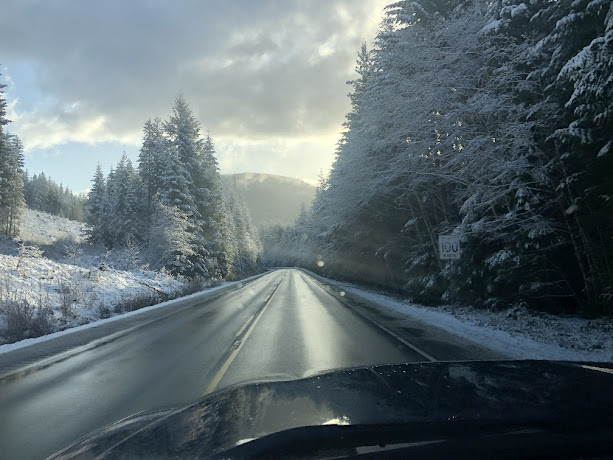 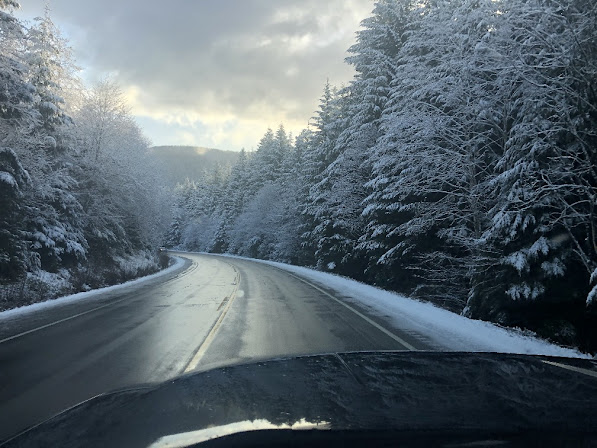 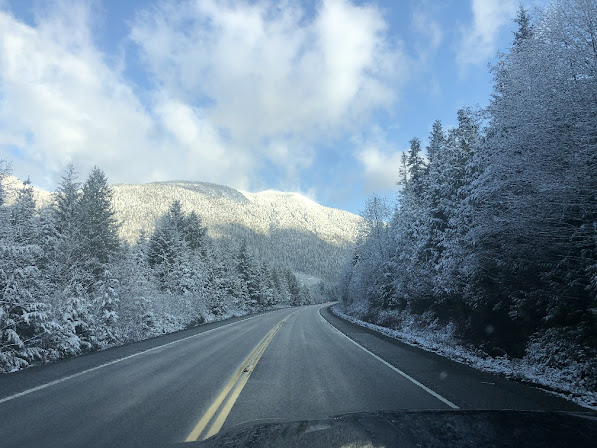 After being on the road for almost a month, and avoiding the snow at home, we thought it might be time to go home and see how my skating rink and hot tub were holding up!  Pretty sure there is no grass to mow there yet - unless you want to use the snowblower first!
But then, a quick check of the weather and road reports, put that plan on hold indefinitely.  Days and days of snow were forecast, and there had been some major pile-ups of up to 70 vehicles on area highways!   :-(
So, I guess Hailey and I will just be marooned on this island for a while longer!
We'll check in later.
at 9:38 am