We haven't been out to the area of Tofino and Pacific Rim National Park Reserve in a few years, so that was our next planned destination.  The plan did not go as well as expected.  They are doing major work on the section of road past Kennedy Lake, with major amounts of rock blasting and re-alignment. 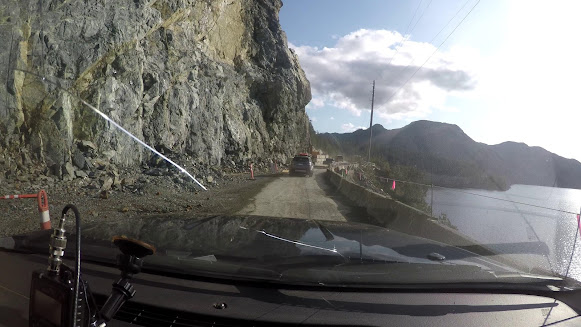 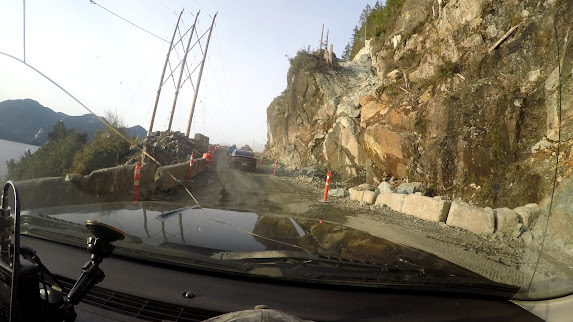 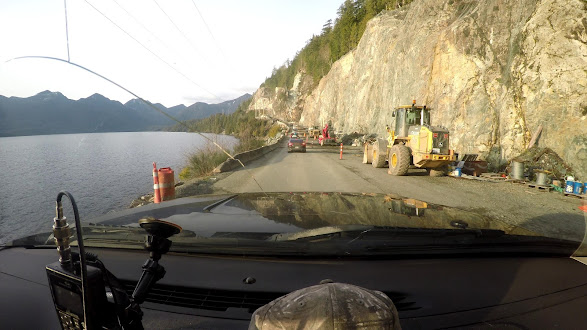 This results in road delays of several hours, though you are given warning from flashing sign boards along the way.  I finally convinced myself to buy an annual park pass (when you have lived and worked in a National Park for 30 years, it doesn't really seem fair?).  But the information office at the junction was closed.  Not sure if it was a Covid thing, or a seasonal thing.  Several logging roads leading out of the park were my preferred parking spots for the night, but they had all been blocked off or gated.  So, I resigned myself to staying in Green Point campground with all the surfers.  Well ... the road to the campground was gated, and there is not even a sign on the highway anymore.  It must have closed permanently for some reason?

I guess Pac Rim is trying to be like Banff and build a cycling/walking trail alongside the highway.  But this requires the destruction of a whole lot of huge old timber, new bridges, rock work, and though parts of it are almost finished, some parts have the ambience of a cut-over!  I know it will be nice when finished, but I'd hate to see the price tag.  Speaking of cut-overs... up around the airport (not sure if that is within park boundaries or not, there IS many, many acres of clearcut logging, with huge burnpiles of what used to be habitat. 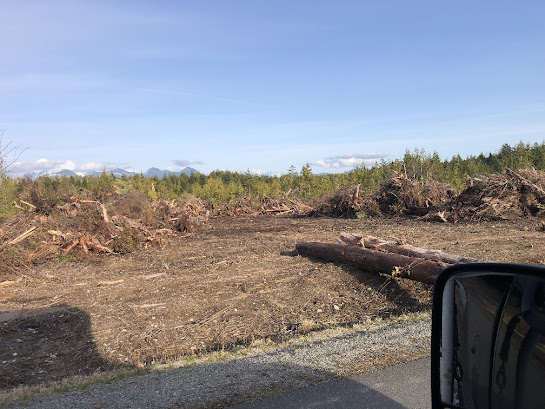 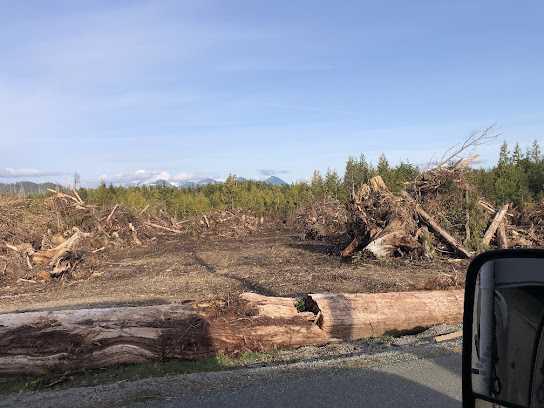 The park has gone all 'Disney' with some of the park signage, too.

With the apparent lack of camping, no information at the info centre, the signs, and the lovely logging areas, I'd had enough.  I didn't even go have a look at the ocean - without a vending machine permit for my window.  We turned around and headed back through the construction zone we had just come through.  Found a nice quiet side trail for the night, and came up with a new plan!

I had been perusing my maps, and spotted a number of intriguing camp spots in the vicinity of Campbell Lake, which is near the city of Campbell River, half way up the island.  So that's where we headed next.  There are quite a few forest service rec sites along one section of lake shore and I wanted to see them all before picking a spot.  Found a nice spot at Burnt Beach rec site for the first night. 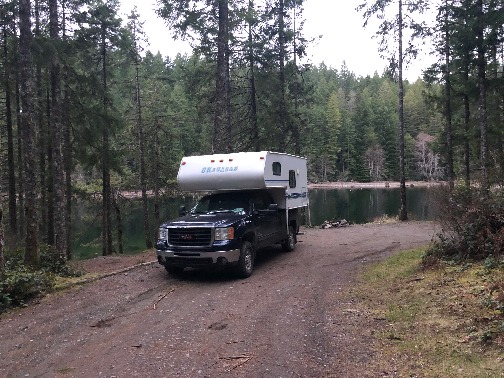 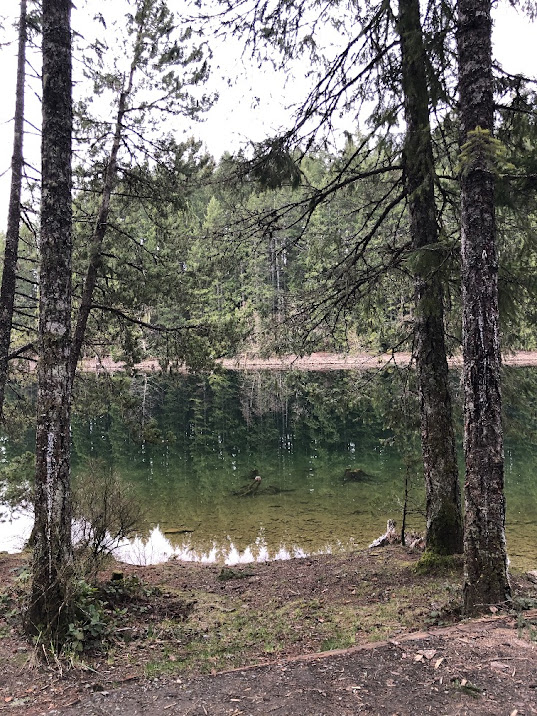 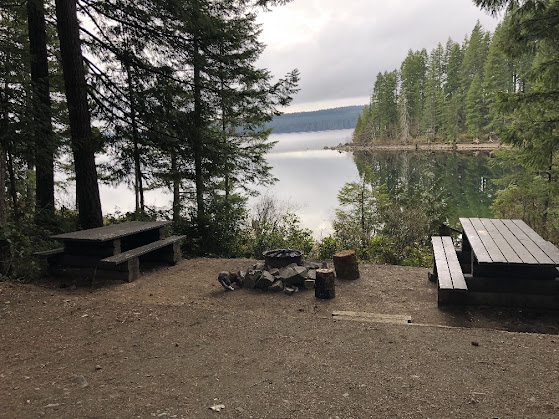 It looks like a great spot in the summer, with a nice little bay for swimming.  Someone else already had the best site with sun exposure, so after one night we carried on. Another spot down the lake is on the portage to Gosling lake.  They have even provided resting spots along the road/portage route to hold your canoe! 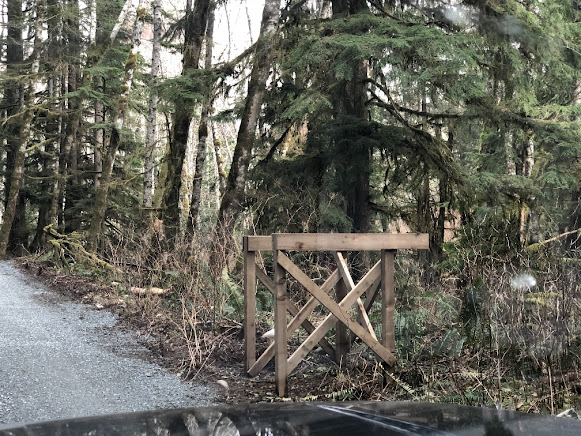 Overall, there were few campers out, but this rig had taken the best view spot in this rec site. 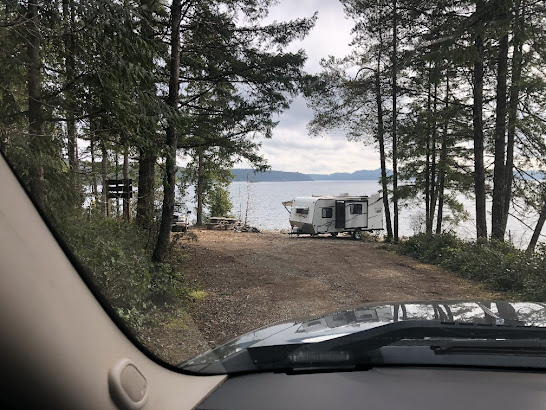 Next, we found a spot at Dogwood Bay rec site.  Water levels were low, so we were right down on the bare beach, which would be under water at other times of the year. 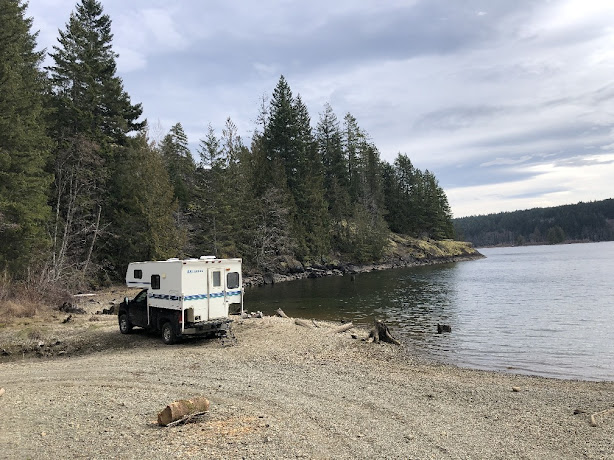 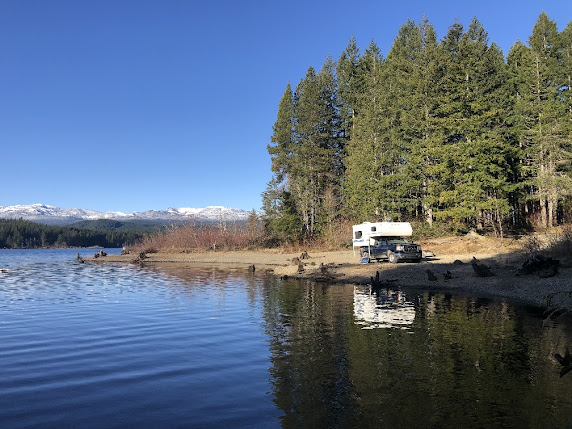 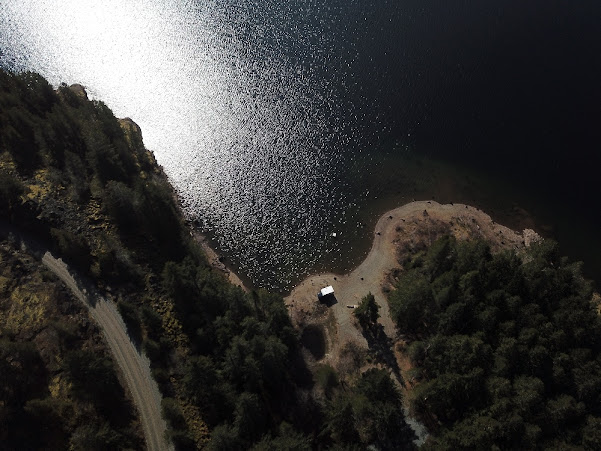 While my phone wasn't picking up much service, my mobile router with MIMO antenna was rocking it. Peaceful, quiet, isolated location, with plenty of connectivity!  We spent 3 or 4 days there, with frequent rain showers.  We exited the lake in another direction, discovering the brand new rec site they have built to replace one closed below a dam.  Wow, pretty darn fancy and well engineered for a free campsite.  I'm sure it will be packed all summer when the locals discover it. 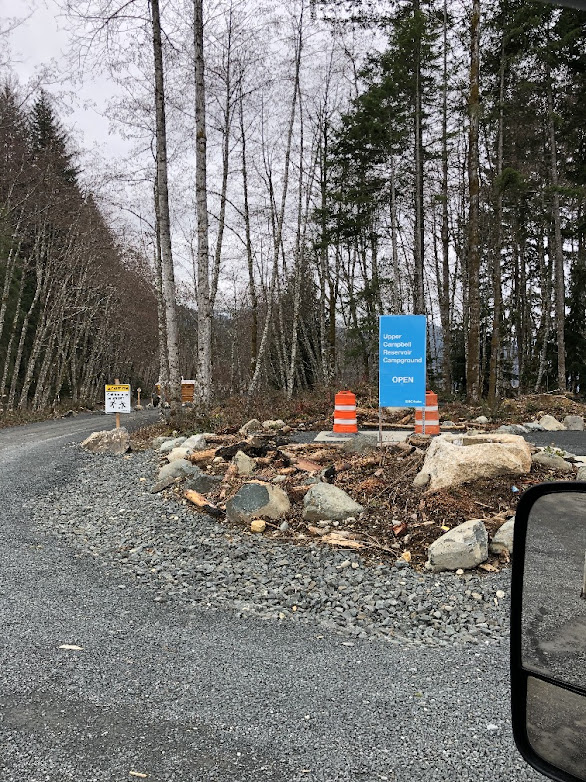 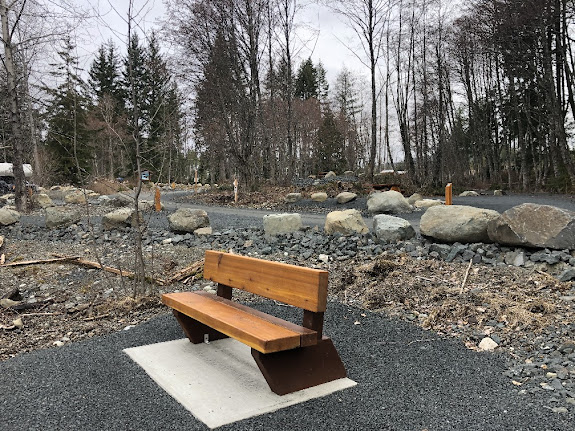 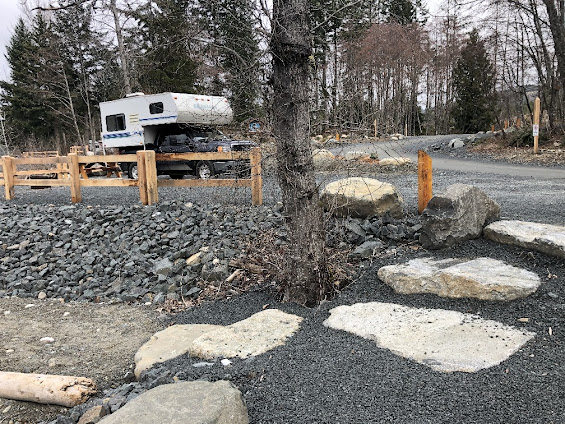 Next, it was decided to visit some previously enjoyed spots from last summer, as we continued northward up the island.  First was McCreight Lake, on the Rock Bay forest service road.  Managed some marginal cell service here. 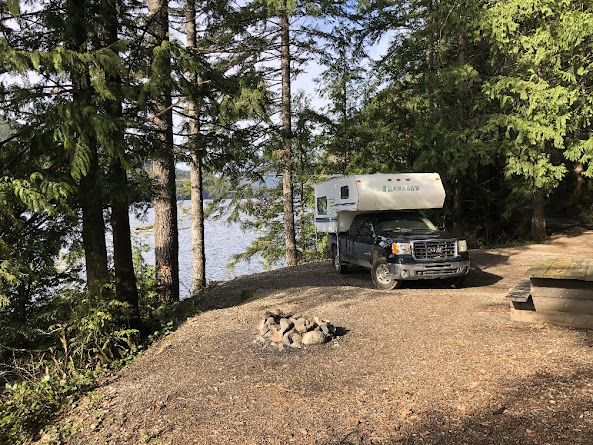 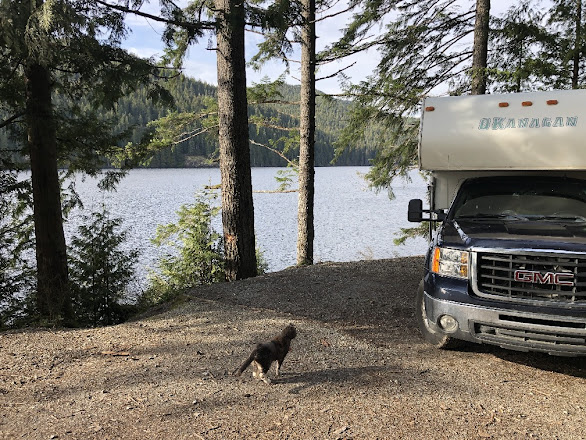 Next, it was on to Little Bear Bay, another free camp, but this time on the ocean - no service here this time.  This is on the inside passage up to Alaska, so there are lots of barges, tugs, and the occasional ferry going past in the distance. 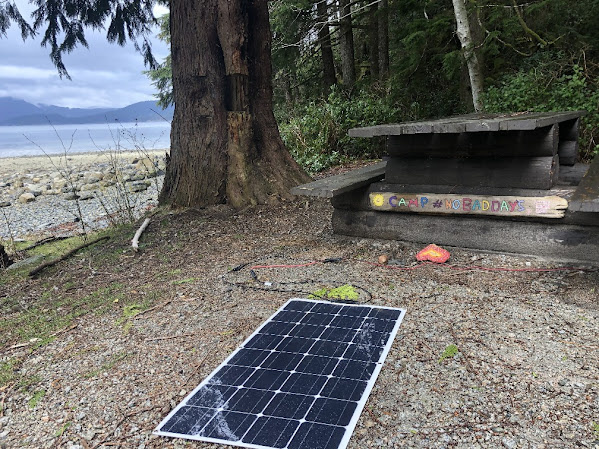 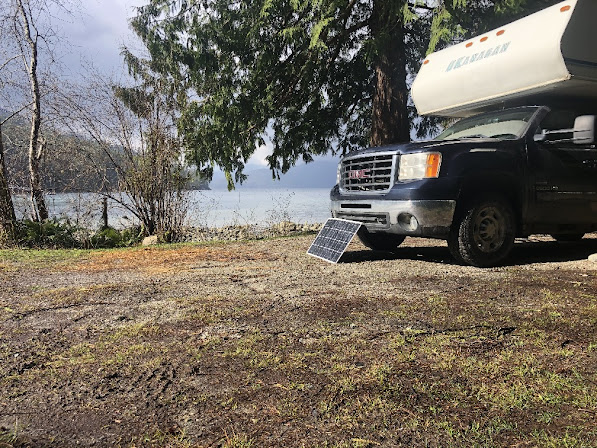 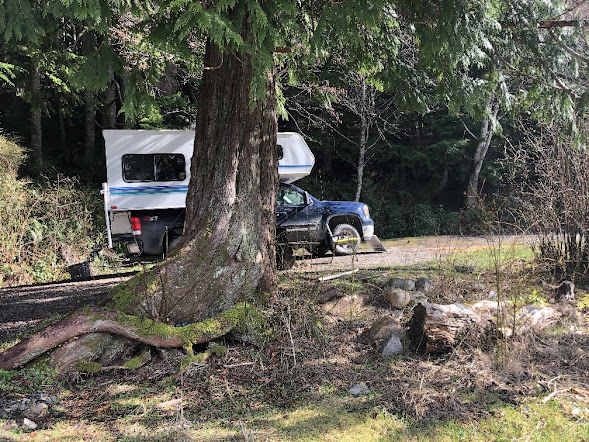 Since this was an exploration trip, we took a new route leaving there, and discovered another great spot at Elk Bay.  It's on the same channel a bit further south, but the boats and log booms pass much closer here.  Unfortunately, the weather did not cooperate for any good aerial surveillance.

There was a log dump nearby, where they sort logs and form up log booms to be towed to the mills. 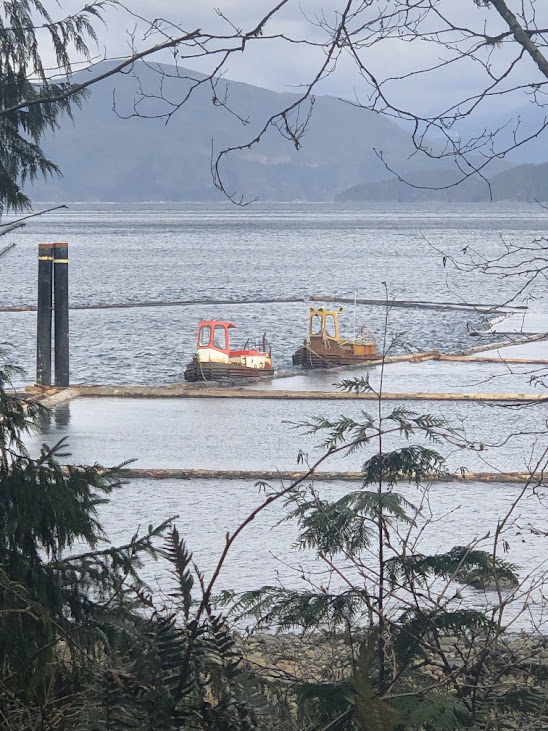 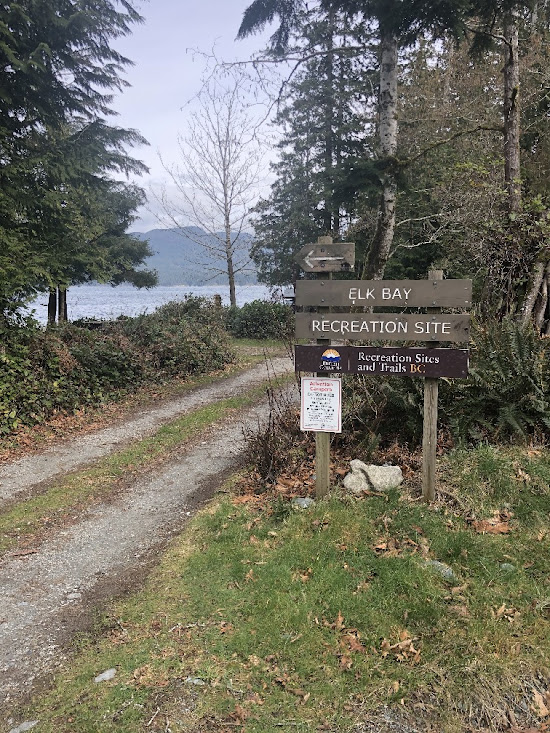 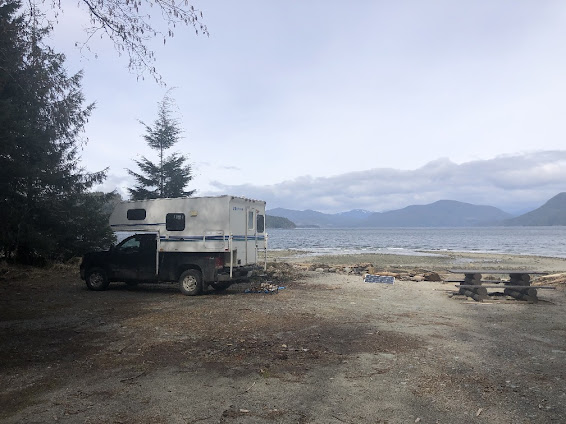 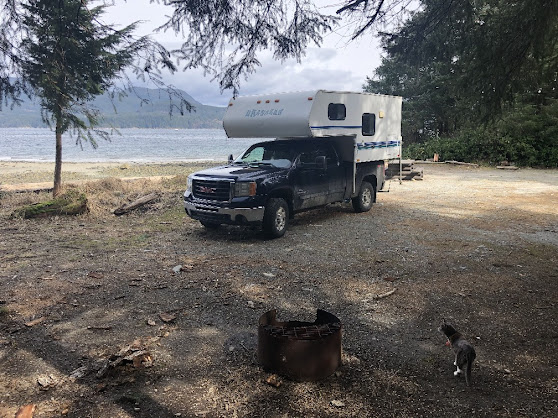 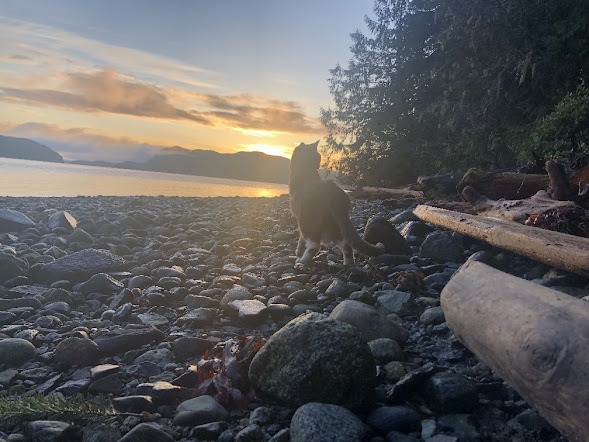 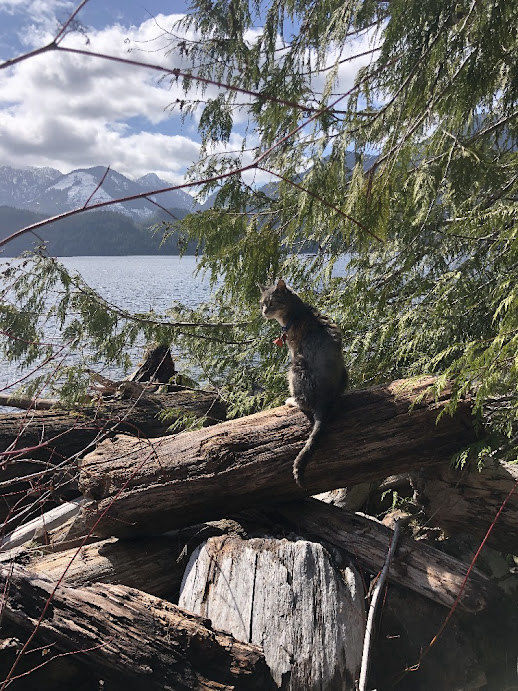 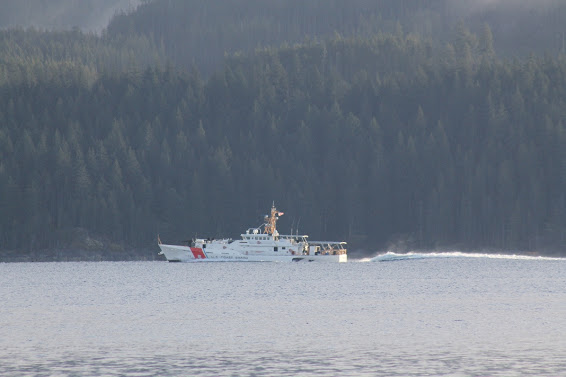