Back to the Great White North!

Today's rant: Thanks Google, for blocking my access to MY e-mail accounts!  Google often brags to me that, "Someone tried to sign into your e-mail account, using 'your' password.  But we blocked that attempt!"  Well, Hello Google, did you ever think that if they knew my password, perhaps that was ME?  Like, isn't that kinda what this password thing is all about? I don't think WikiLeaks cares about my e-mails!

Ok - on to the blog thing.
After a long day on the road from McMinnville, Oregon, we stopped for the night near Sandpoint, Idaho, at a quiet waterfront spot on Pend Oreille lake.  Other than a few passing trains to punctuate the night, it was a quiet one.  The cheapest fuel in Sandpoint was sold out of fuel (funny how that works!), so we emptied the rest of our 5 gallon cans into the tank and made it to the last station before the border in Bonners Ferry and filled everything to the rim.  The goal is to avoid, if at all possible, buying fuel in British Columbia - which is kind of like California when it come to prices! 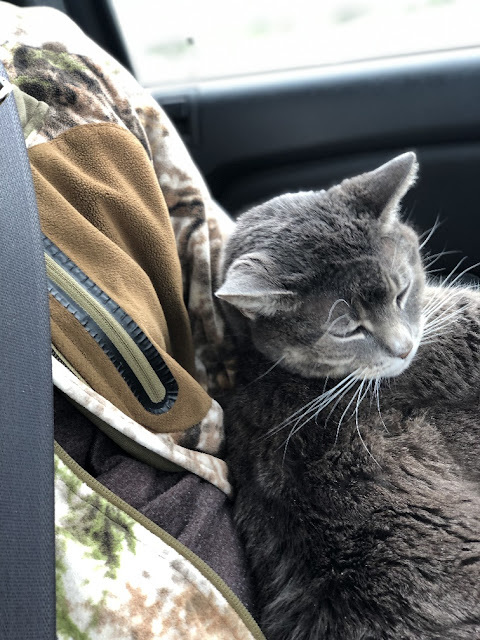 Border crossing was a breeze, and we were on our way to a brief stop in Wycliffe, BC, where we visited with Dale and Doug who run a lovely B&B on the St Marys River. St Marys River B&B.

We had nothing much to 'donate', but being the last convenient dump site before home, the tanks were all drained at the convenient site behind the information centre in Cranbrook, BC.

There were only a few traces of snow visible in shaded spots in the bush and roads were bare and dry. 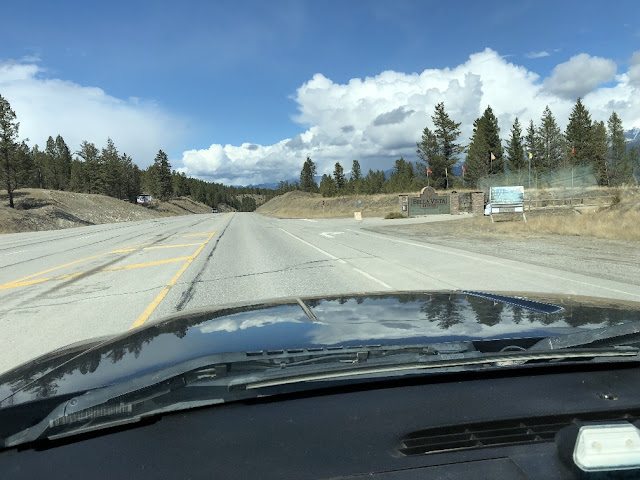 That is, until we started to cross the Rockies and continental divide in Kootenay National Park, my old stomping grounds. 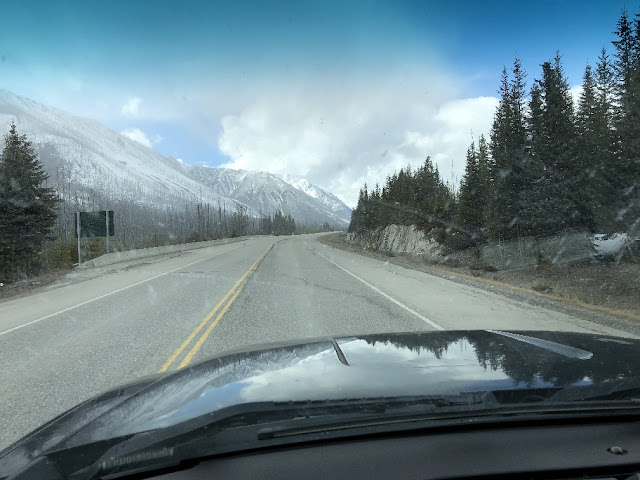 Then, the flakes started to fall, large and fluffy, but melting as soon as they hit the ground. 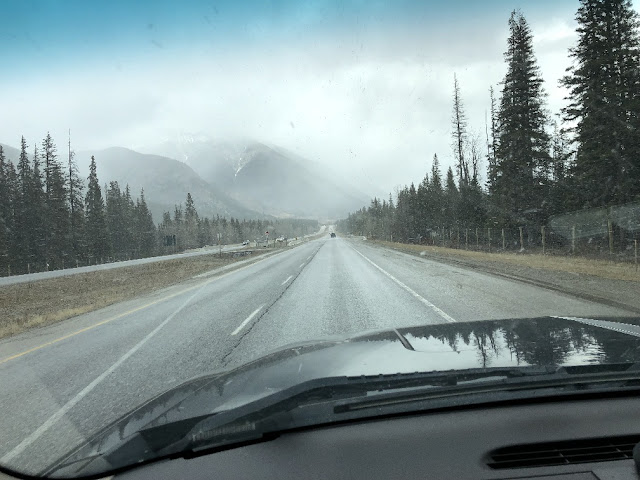 We made it over the mountain passes, and back down into Alberta on the same tank of fuel from Idaho.  Not satisfied with the prices in Banff or Canmore, we again stopped and dumped in our spare supply so we could make it to a little station in the country near home, that had even cheaper prices.  It still cost Can$138. to fill up, but always good to save a little. 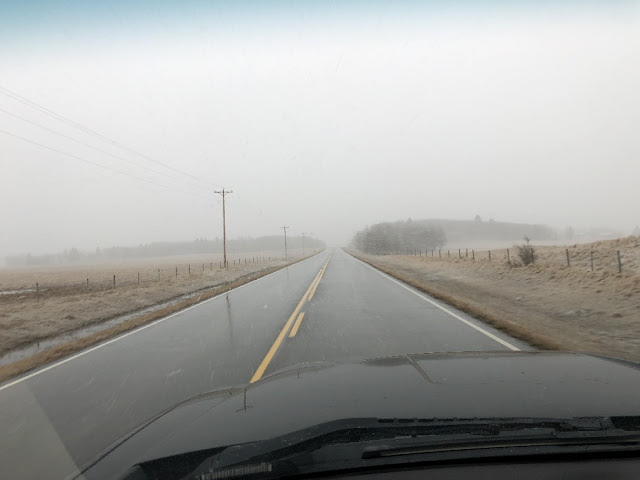 There were a few more snow squalls to contend with along the way, but other than a brief reduction in visibility, nothing to slow down progress. 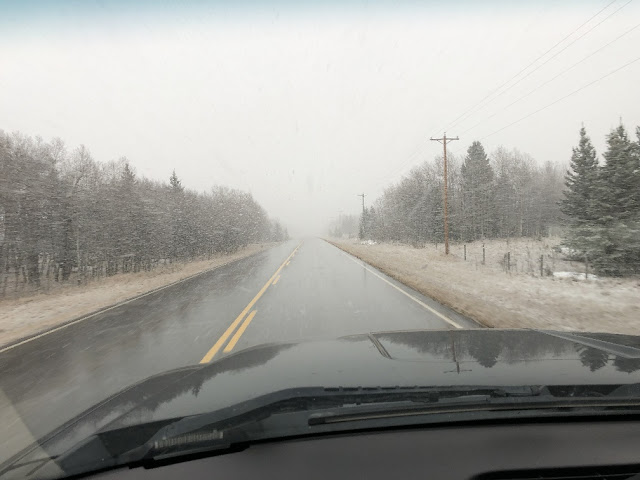 It cleared a little bit as we got closer to home, and it was nice to see that there was no snow at all left back at the homestead! 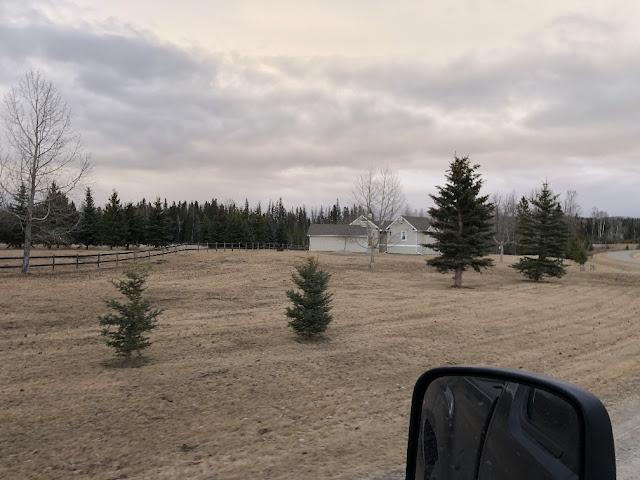 Once again, the 'high-security' gate had kept the place safe and sound! 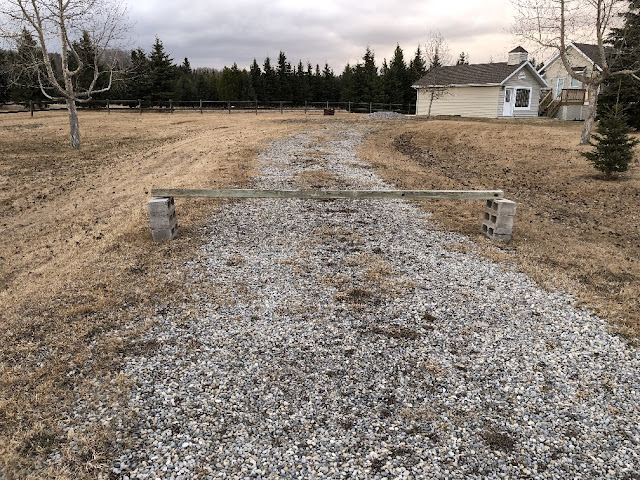 Quite a difference from last year's return (below)! 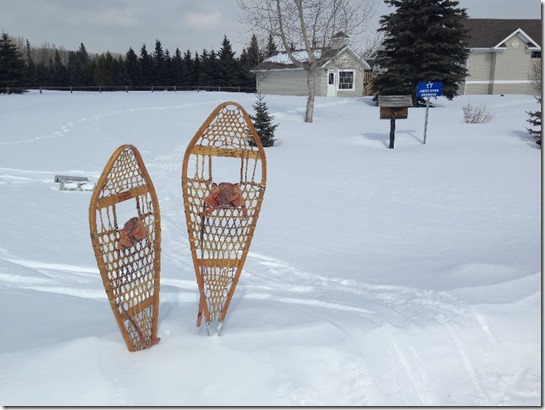 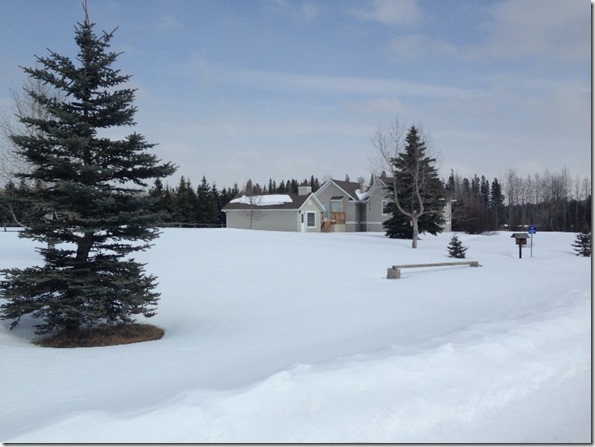 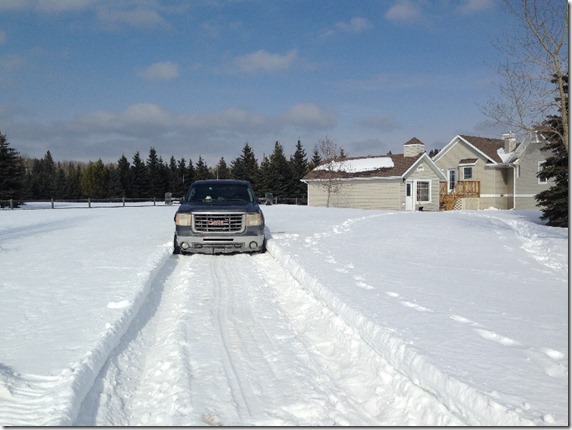 Hailey was out in an instant, checking in on all her mouse friends, who were no doubt looking forward to her return! 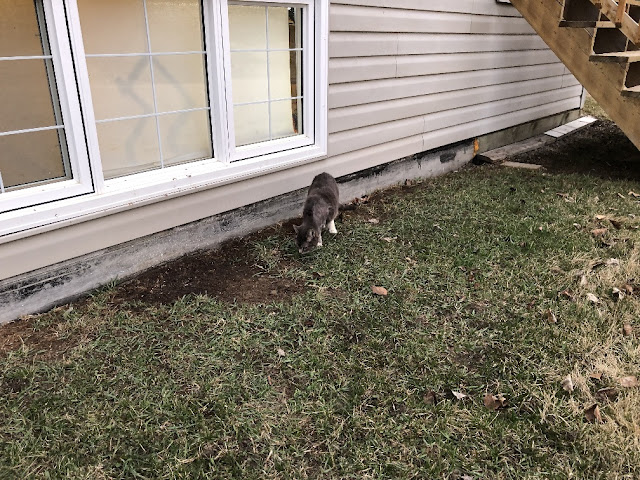 And, she was looking happy to be back in her indoor domain as well! 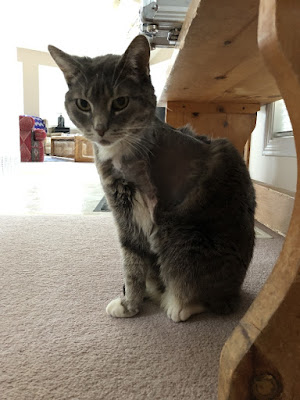 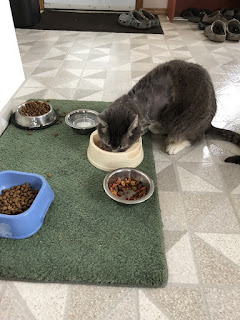 From the cutting room floor ... 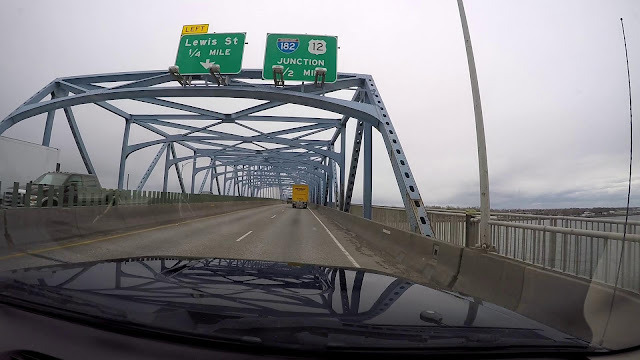 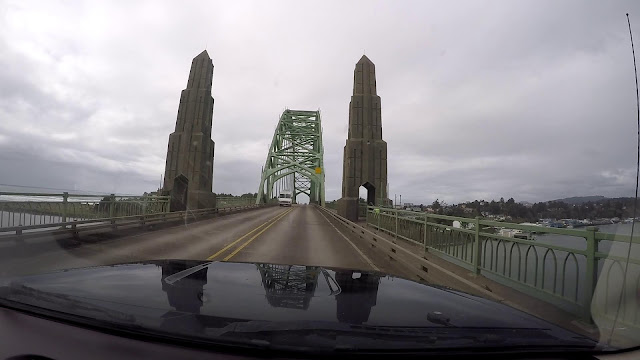 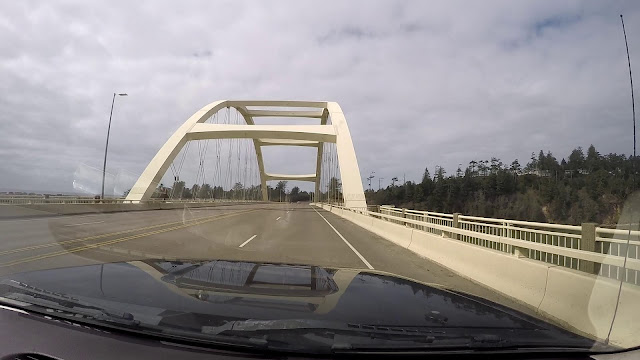 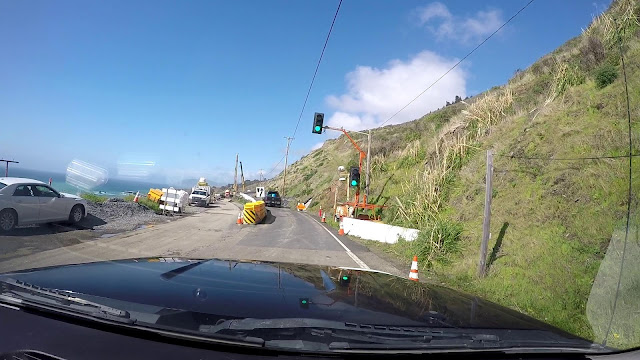 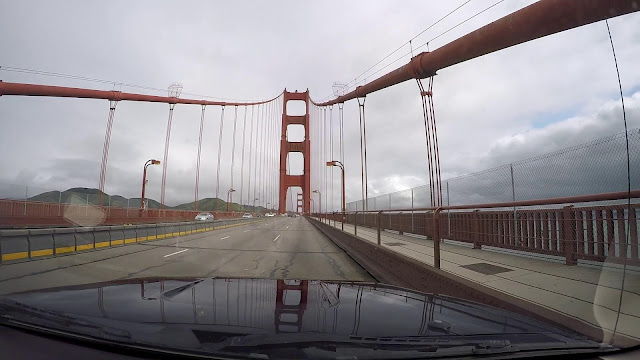 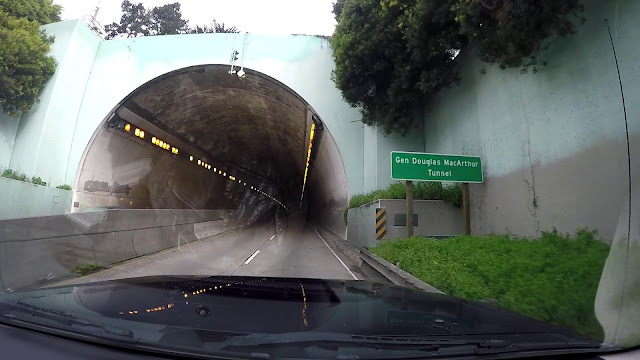 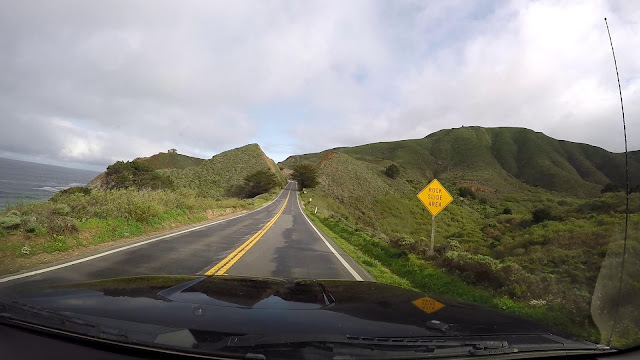 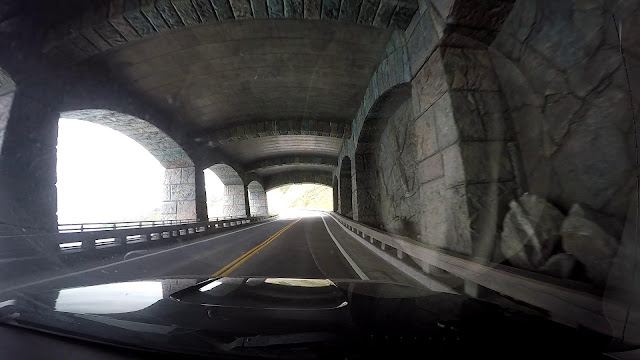 No plans for the next month, except to huddle indoors in front of the fireplace, waiting till it's warm enough to go outside, or get back on the road! And watch the Stanley Cup playoffs on the big screen!

So don't expect another update for a while - unless I do something, or take some photos.