Putting on some Miles–Change of scenery!

After close to two weeks in the Sedona area, it was time to get the wheels rolling again, and get some touring in before this winter travel season is over.

First things first, though. Hadn’t dumped the black tank since around NY’s in Buckeye, so it was an easy decision to donate at the Giant gas station right at the main junction in Cottonwood.  The plan formulating involved some major hill climbs and the extra weight would not be welcome.  Also saw a ‘Bing’ photo car driving in Cottonwood – just like the Google Streetview cars, only with Bing on the side.  I guess Microsoft ‘Streetside’ is trying to compete with Google?  Good luck with that! With that done we headed across the interstate at Camp Verde and up into the hills on top of the Mogollon rim.  Signs indicated that ‘all’ forestry roads in the area were ‘closed’ for the winter, whatever that means.  They were doing some controlled burning in the area, so perhaps it was a public safety thing?  Certainly, snow did not seem to be a factor on the roads I saw.  After cruising through Strawberry and Pine, we did find an open forest service road that provided a good spot for the night.  And I have to say that the coyotes in the pine forest did a much better job of singing than their desert cousins!  Managed to pick up about 5 lbs of ‘brass’ from the campsite as well.  From there it was mostly coasting downhill into Payson.  Took in the ‘Sniper’ movie there and ended up spending the night courtesy of Home Depot!  Next day, it was more gliding and downshifting on the way further south and into Apache Junction.  My plan there was to listen to and meet some Texas cuties, and it worked out well.  The Quebe Sisters Band was playing at the Mining Camp restaurant in Apache Junction, right under Superstition Mountain.  There were three sisters from the Quebe family, and a pair of identical twins (the Clark sisters; their own band is called the Purple Hulls) playing in the band, all from Texas.  The gals have won a lot of fiddle competitions including being Texas champs.  Needless to say their playing was incredible, but I think their singing was even better! 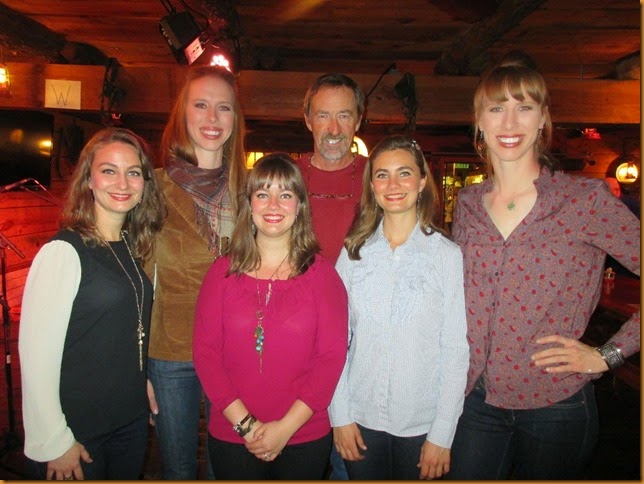 Quebe Sisters Band on Youtube.  They have shared the stage with many top performers, and are now starting a tour with Asleep at the Wheel.

After that great show, I was pumped to climb up Superstition mountain again the next morning. 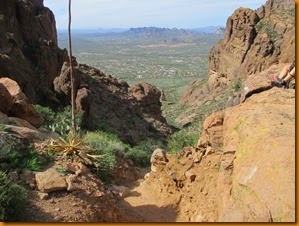 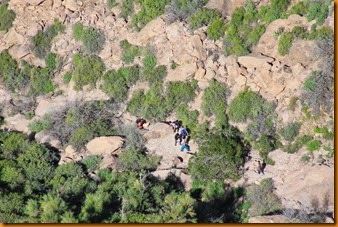 It’s a steep and scenic hike that attracts a lot of different folk.  Some hike in groups with matching T-shirts … 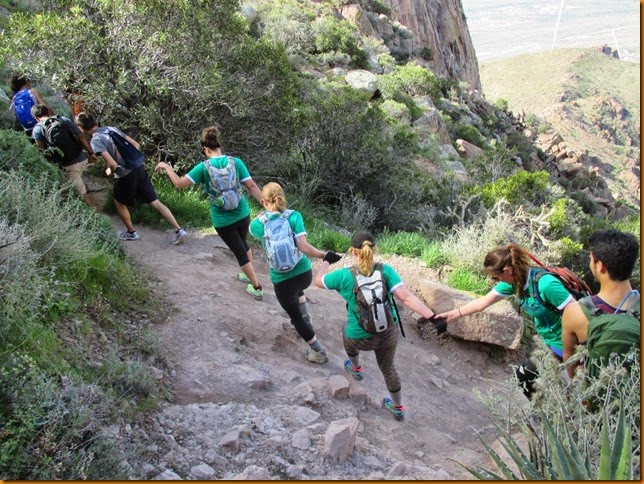 Some do yoga, and this fellow impressed me by getting up there with one artificial leg. 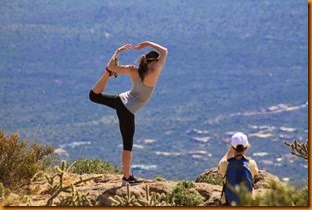 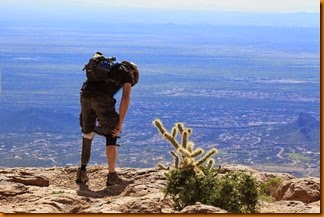 I could see my rig down below, in a sliver of BLM land just outside the Goldfield ghost town. 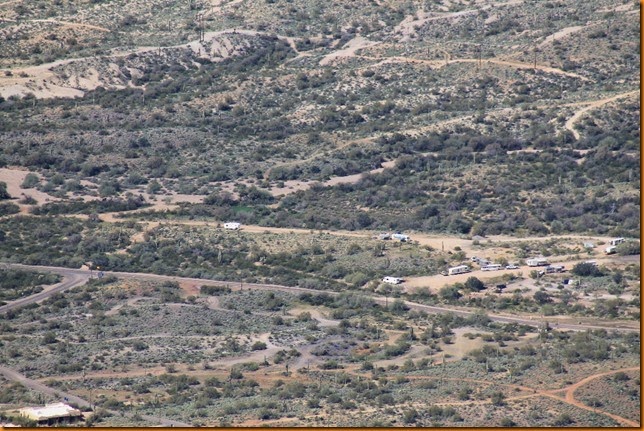 From the summit, you can catch a glimpse of Canyon Lake on the Apache Trail.

The Mining Camp Restaurant, and the feature known as the Flatiron. 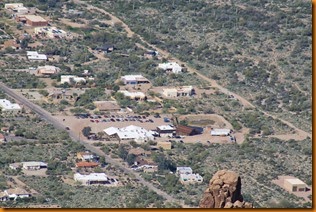 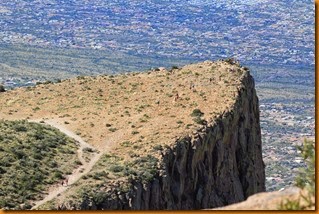 And of course, I did another Photosphere from the summit.

Check it out here! 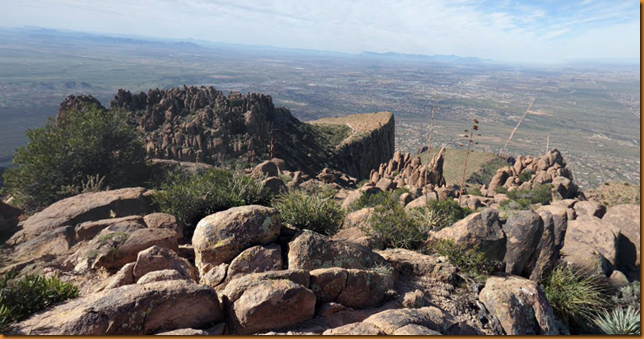 There was an injured hiker on the way down … 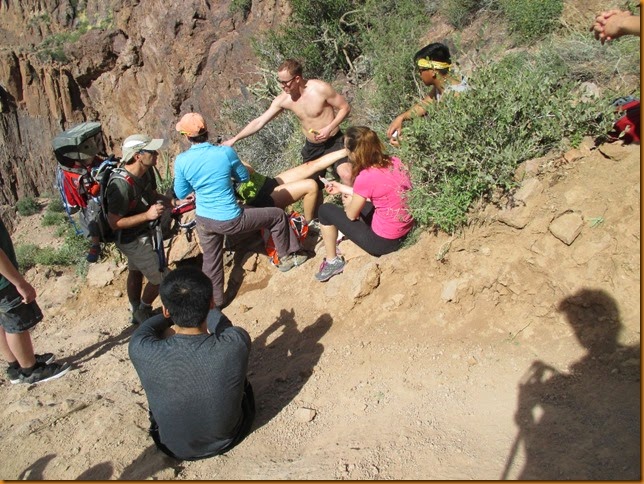 An avid hiker’s vehicle down in the parking lot.  I liked the ‘actual size’ notice. 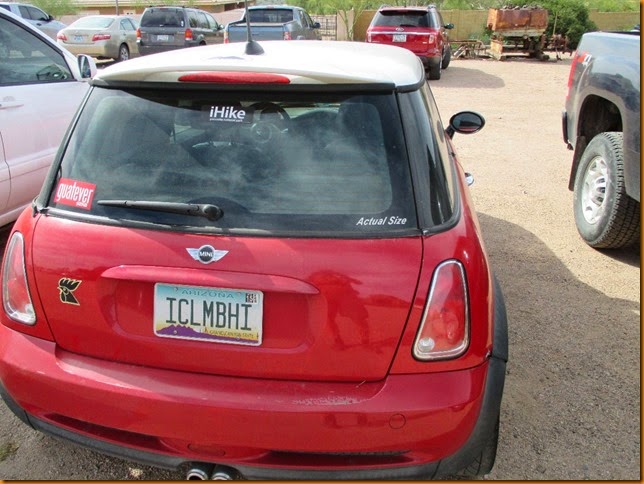 Other RV bloggers are beginning to scatter.  The elusive Wandering Willy should be back at home in front of his big screen TV by now, Doug and Yuma are over near Borrego Springs, Wheeling It are San Diego bound, stopping only for breweries, and the Bayfield Bunch are in the planning stages for their long trek to the north east later in March.

Me?  Well, I headed down to Hot Well Dunes to use up my camping budget for the year – 3 nights at $3.00/night, and then further south to Indian Bread Rocks, before turning and starting to head to the north west again myself.