(Well, I originally published this at 2:36 pm MDT, but almost three hours later, it has not shown up on a single blog sidebar.  I sent it back to draft form and published again, but there has been no change at all.  Not a single reader has been recorded.  Thanks Blogger for keeping my posts hidden.  It's really thrilling to spend hours on a post - for nothing!)

(It's now 6 hours post-publishing, and it has not shown up on blog sidebars, and not a single reader has discovered it)

(Nice to see that a few readers have now discovered the blog post - but only after I had to do a 2nd post to link to it.  That is not how it is supposed to work!)

After a night spent in a scenic waterfront spot in Port McNeill, on northern Vancouver Island, we headed into town. 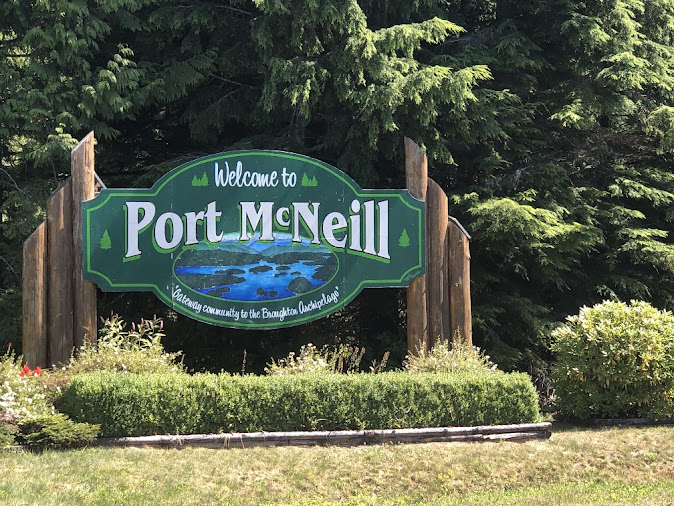 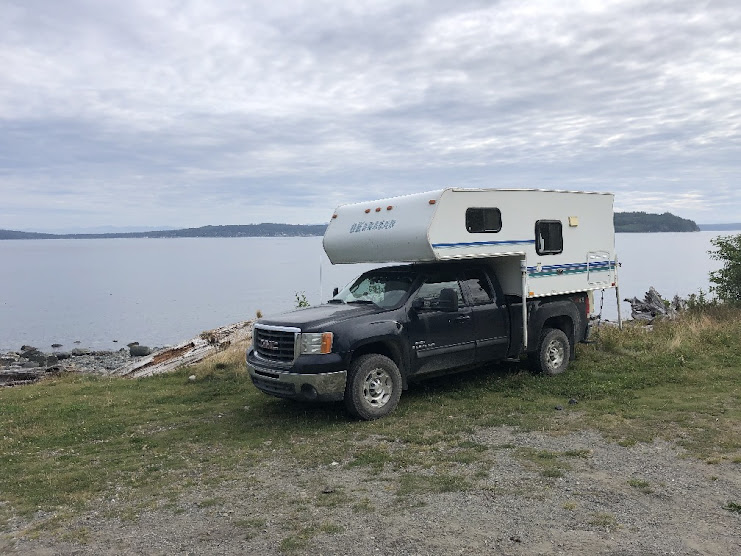 Found us a laundromat!  As a Covid precaution, I parked backed in, to hide my Alberta licence plate - in case any of those coastal folks took offense to an Albertan traveling in their midst. 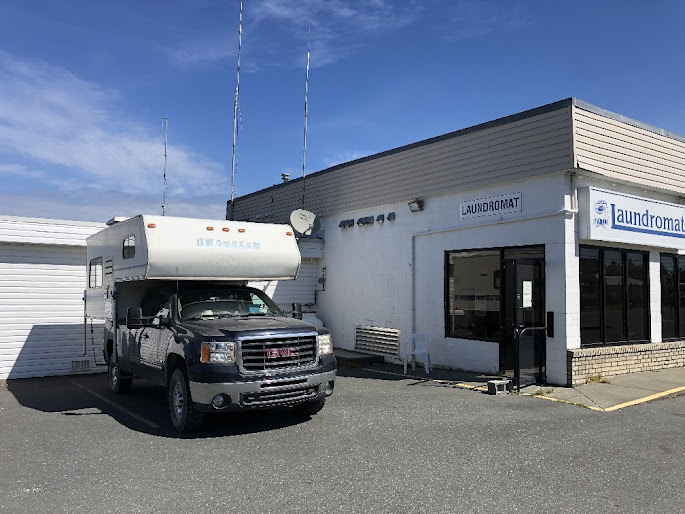 At the end of a long jetty was this now abandoned A-frame that used to help unload logging trucks by dumping the load into the ocean. 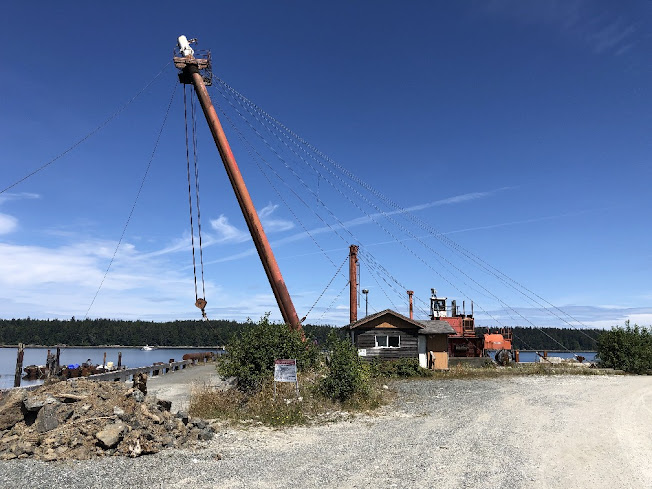 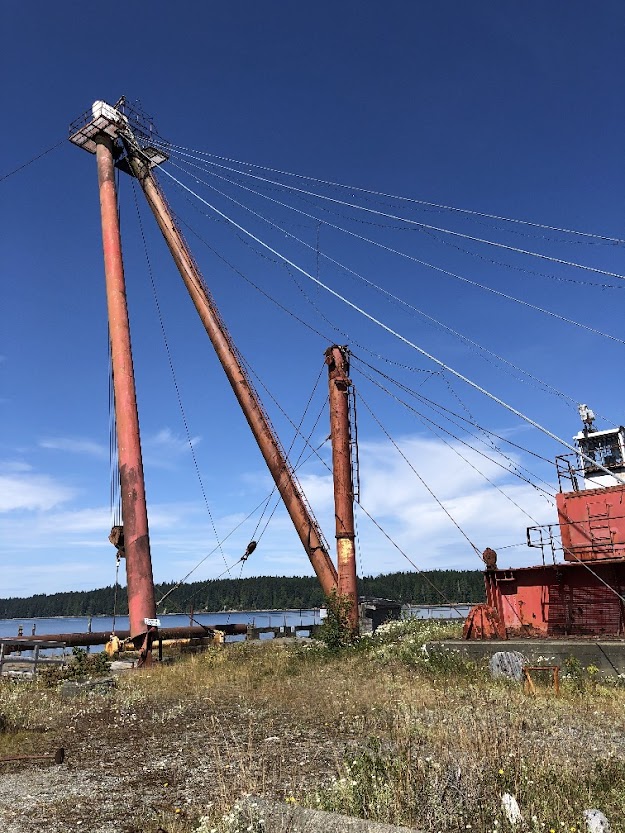 As luck would have it, I met an older guy walking his dog out there who told me he had worked on the apparatus for years, including an earlier wooden version. 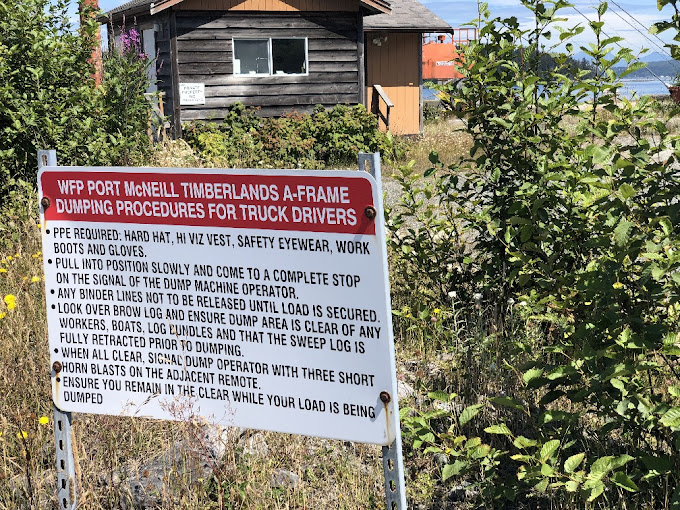 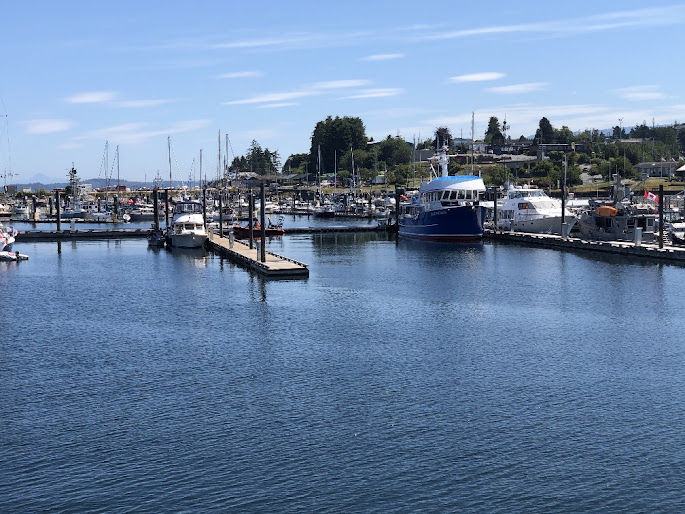 After the tour of the waterfront at Port McNeill, we headed a bit further up island to port Hardy.  There was a convenient RV dump in Fort Rupert, site of an original Hudson's Bay company trading post.

There is an interesting road headed from Port Hardy further to the furthest north-west corner of Vancouver Island to Cape Scott.  Having never been out there, it was worth checking out.  As expected, it was gravel, after the first couple of km, but the ugly dust and washboard made the decision to turn back an easy one.

We headed back to our convenient waterfront camp spot near Port McNeill for the evening.  Got to watch a northbound barge carrying 5-6 large track hoes, as well as a number of huge mining trucks.  Must be headed up to mine further up the coast - or Alaska!

The next stop on the way south was at Telegraph Cove.  This scenic little coastal spot has a very small harbour, and was the home of a cannery at one time, but is now mostly tourism dependent.  It is also the starting point for tours of nearby Johnstone Strait, and Robson Bight, one of the best spots to watch Orcas.

It appears that some residents of Telegraph Cove like their satellite TV.  A lot of it! 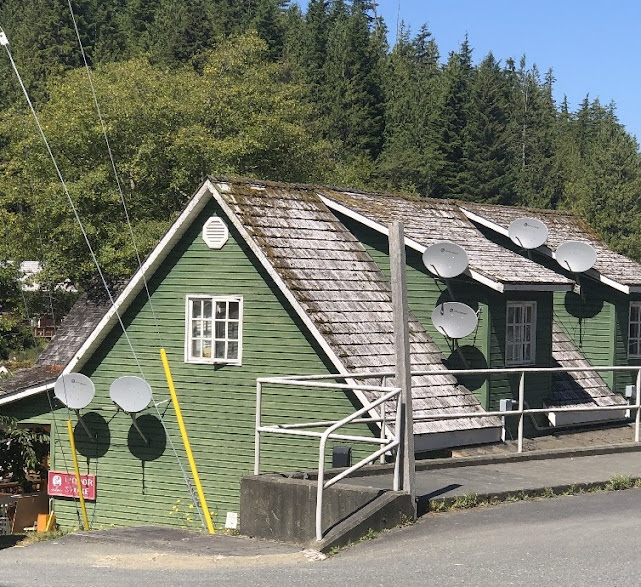 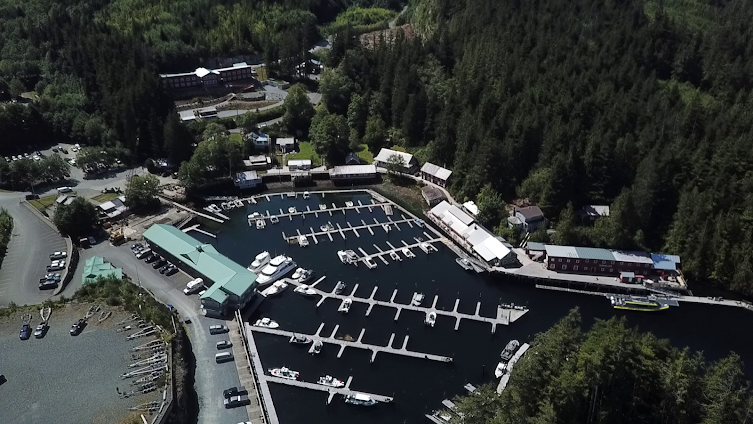 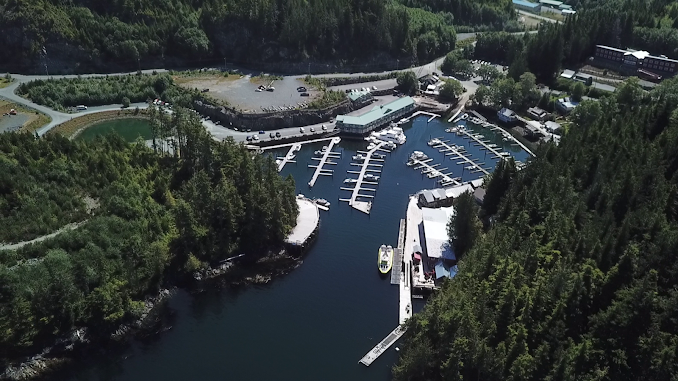 It's very scenic, and very touristy there, with hardly anywhere to go that wasn't 'pay parking'.  Too crowded for me - unless you are hopping into a kayak and heading out somewhere. 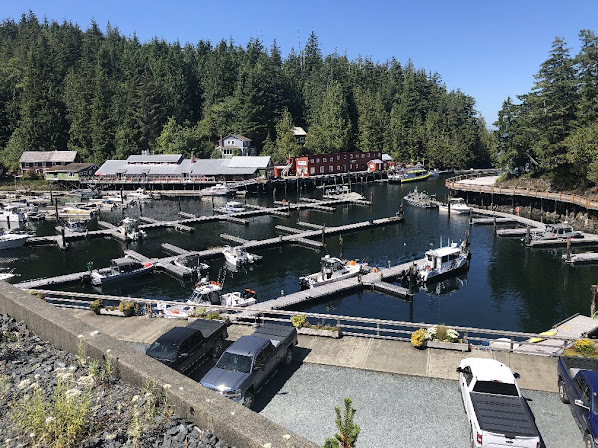 Just around the corner, in the next bays, there are some very active logging and sawmill operations. 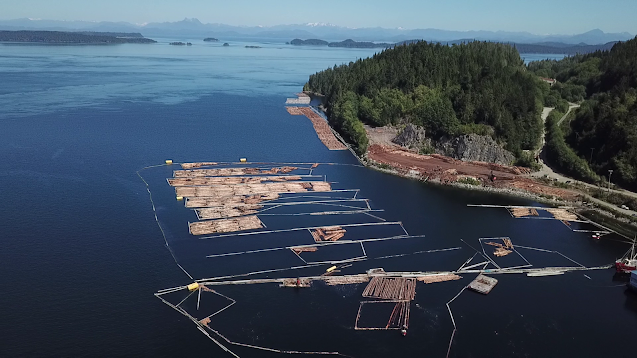 Short video of one of the logging oerations. 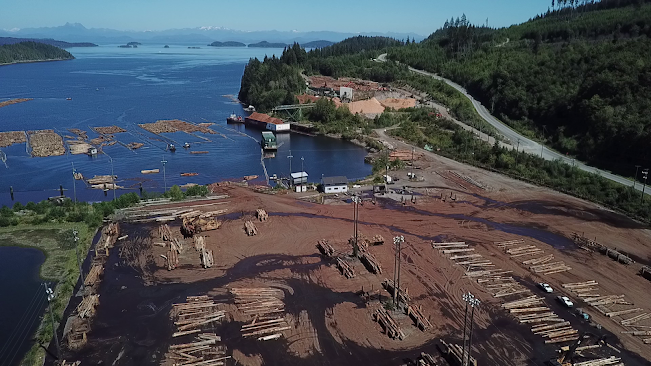 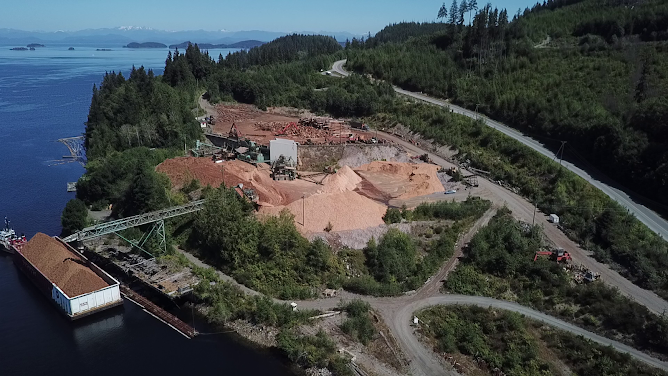 Continuing southward down the island, the temperatures really increased.  It was a toasty 31C when a roadside spot caught our attention.  I'd made note of it near Woss on the way north, but not checked it out.  It trned out to be a great little spot - a really steep, short little spur leading off the highway, down to the river bank.  There was no chance of turning around, so you had to back down into the spot.  Though close to the highway, it was completely screened by timber, and the traffic volume at night was almost nil. 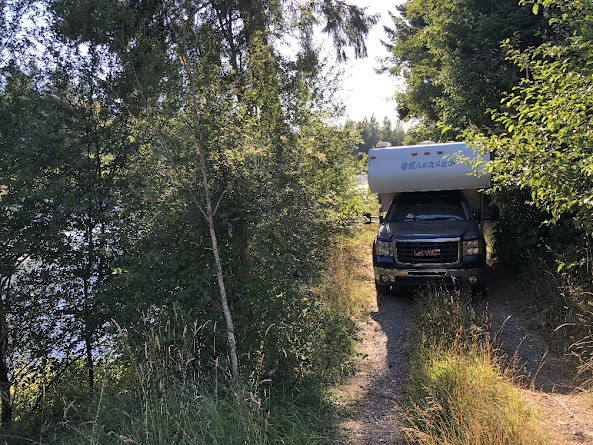 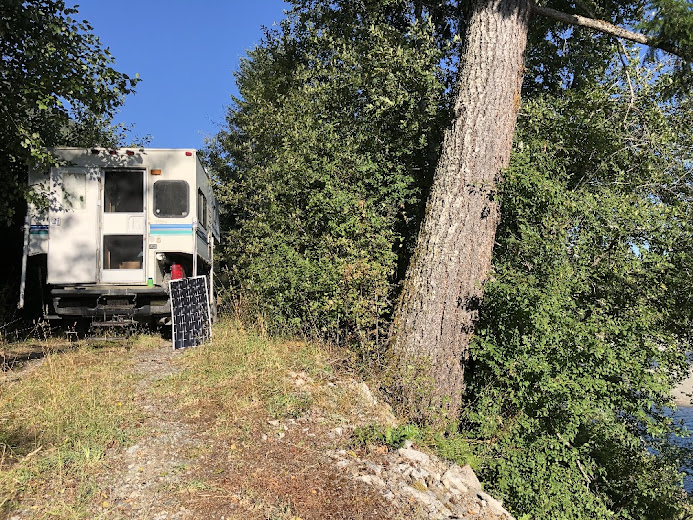 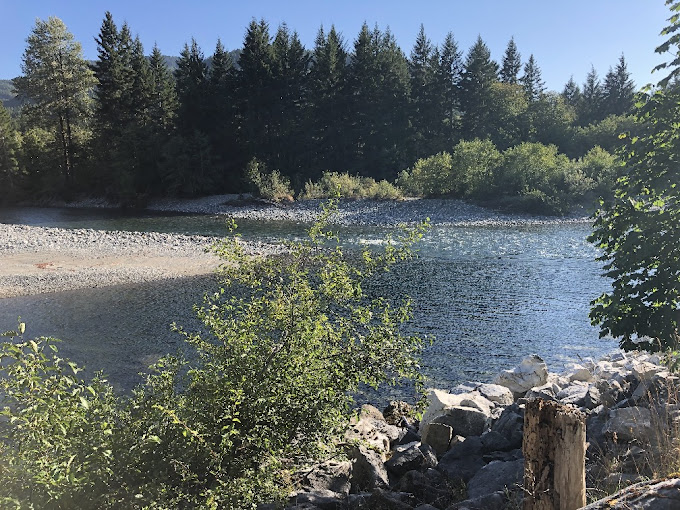 Because it was hot, it didn't take me long to get in the river for a swim, while Hailey checked out the local insects and rodents.  There was a nice backwater for swimming, but it turned out that the main river channel was even warmer than the eddy.  The hot rock rip rap (say that three times fast) was almost too hot for bare feet, but the water was very refreshing. There was also a very nice beach on the nearby sandbar - if you didn't mind the bear tracks on it! 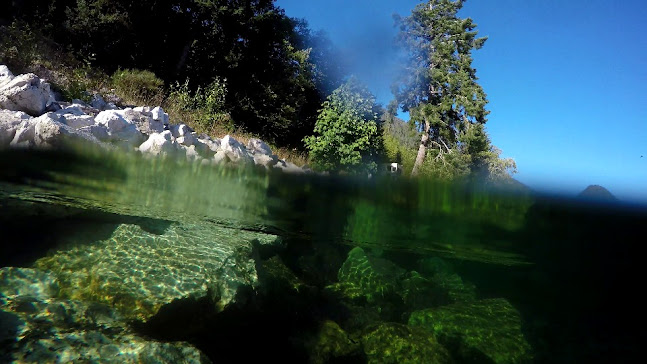 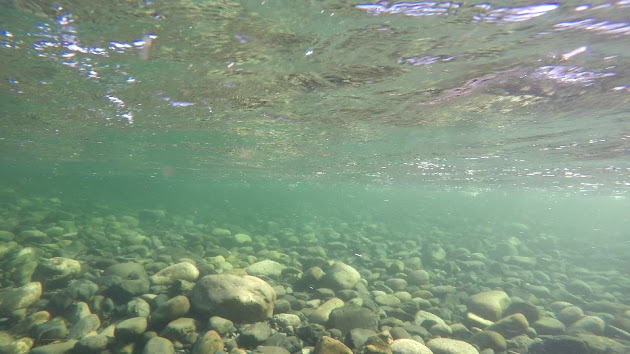 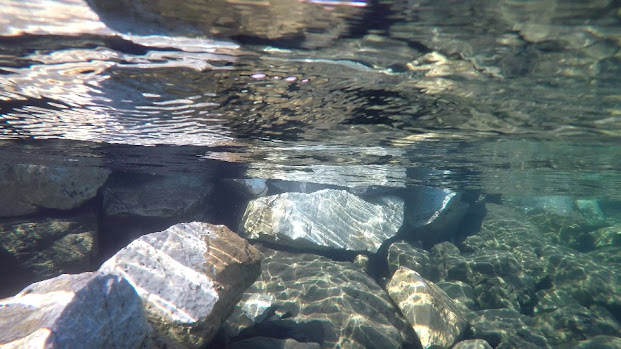 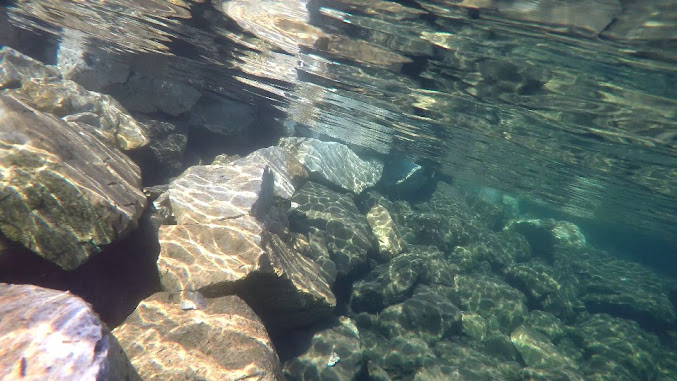 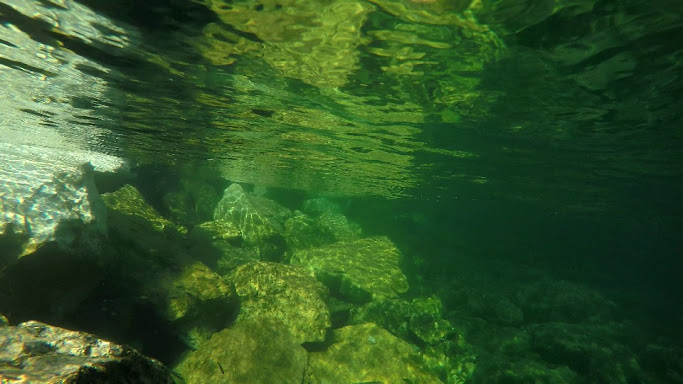 With a long weekend upon us, we had to figure out where to hide to avoid the crowds on the roads and camping areas.  Heading south further down the island, we were able to driveway camp at the home of another retired Park Warden, author, and friend from back in our Jasper days. He and his wife live in Parksville, ... I mean Qualicum Beach(!), just a couple blocks from the ocean. 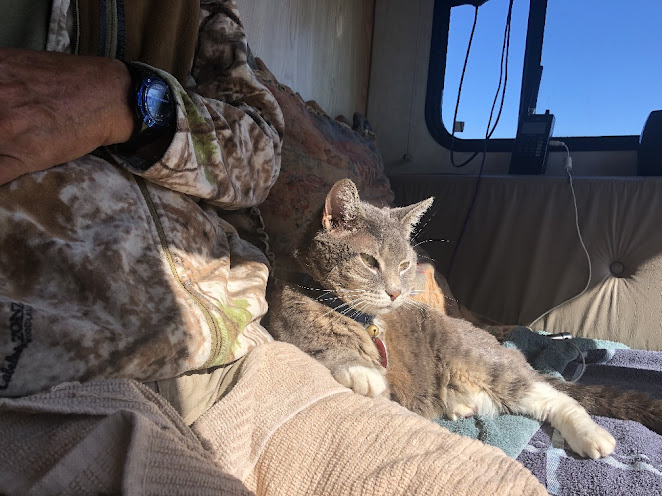