We had travelled up BC's Sunshine coast to Powell River, then boarded the Salish Eagle ferry for the crossing over to Comox on Vancouver Island.  Note: this was in late July.  Just working on getting the blog caught up! 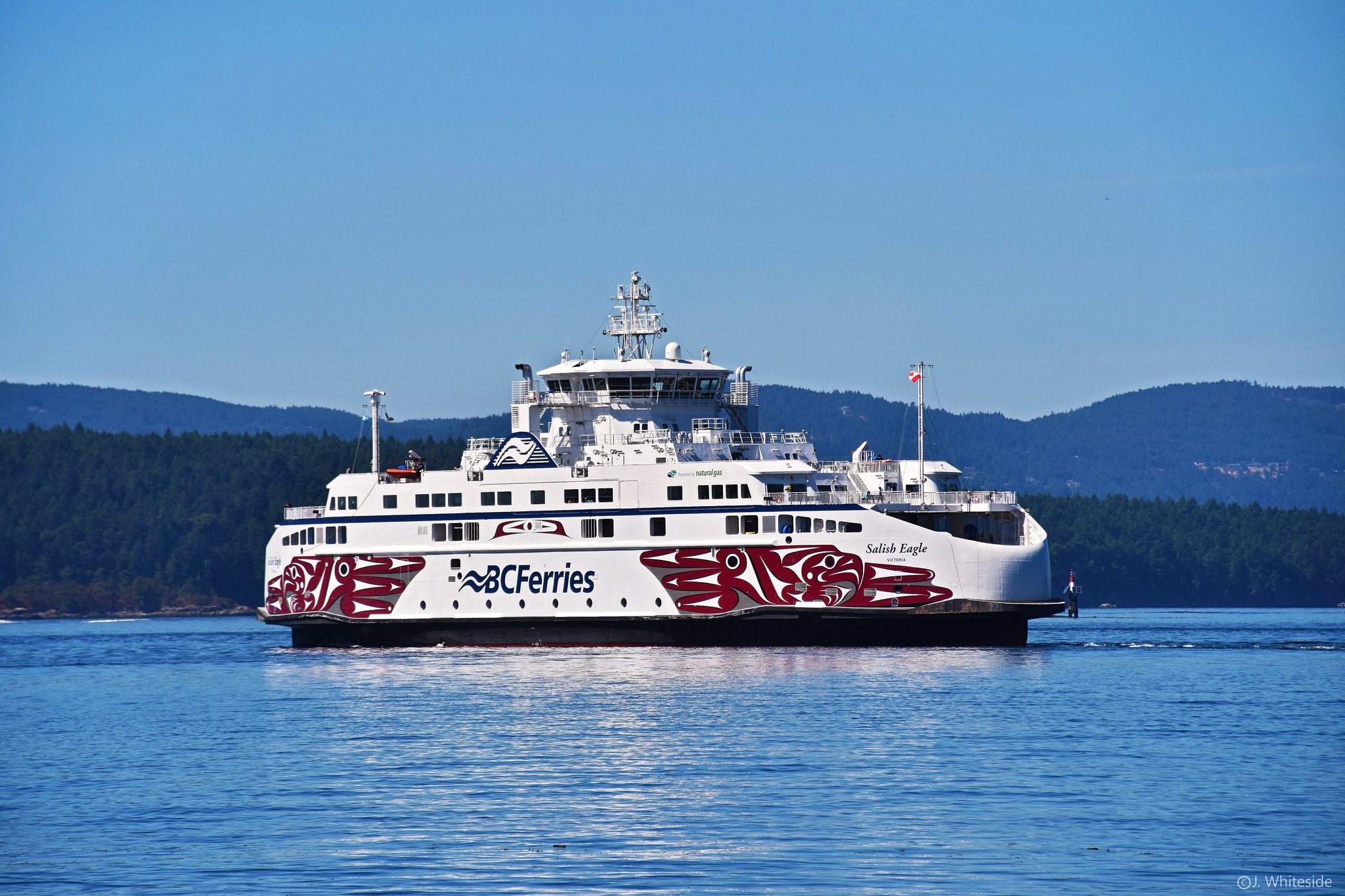 We headed northward up the island highway, stopping briefly in Campbell River for supplies and fuel.

From there on we started to check out various logging roads, especially ones that might lead to the coast.  One of the prime discoveries was the forest service campsite on McCreight lake.  The beauty of the site was that all sites are right on the water of the scenic lake.  There are perhaps four sites total, and they are about 100 yards apart! 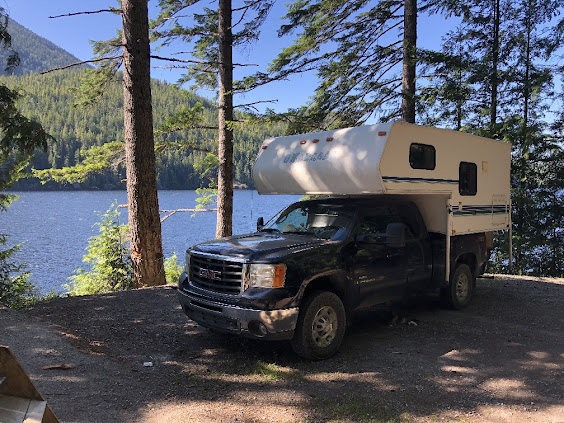 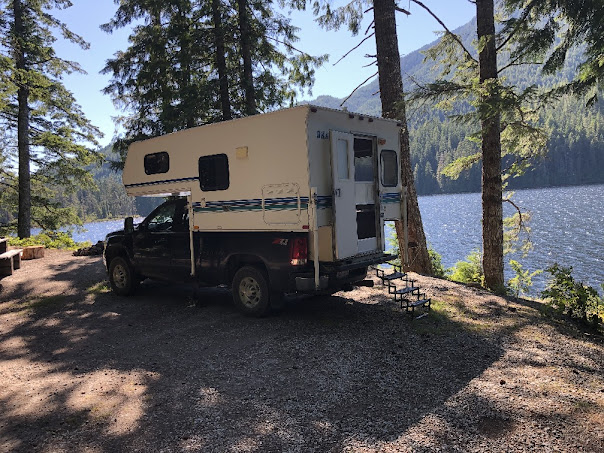 And some nice previous visitor had even left a small supply of firewood! 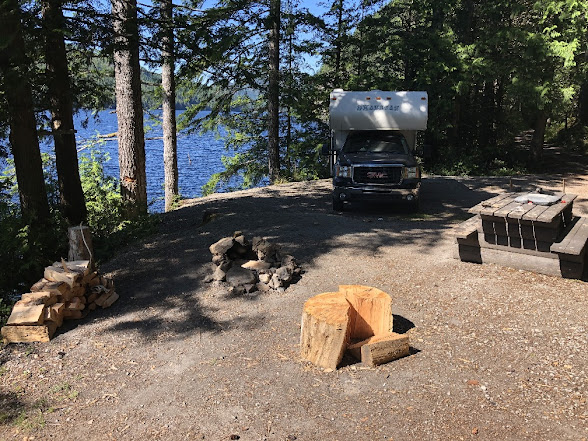 It was another hot day, and the lake was perfect for a cooling swim after a hot day and a dusty logging road.

The logging road continued towards salt water, so in the morning we followed one branch to a busy private resort campground, Rock Bay Resort; the other branch led to another forest service campspot - right on the ocean.

Another free camping spot, with possibly 10 sites, mostly side by side, all ocean view. But down at the very end was quite a private little spot with some big trees for shelter.  There was only one other truck camper when we arrived, and a couple more units pulled in later. 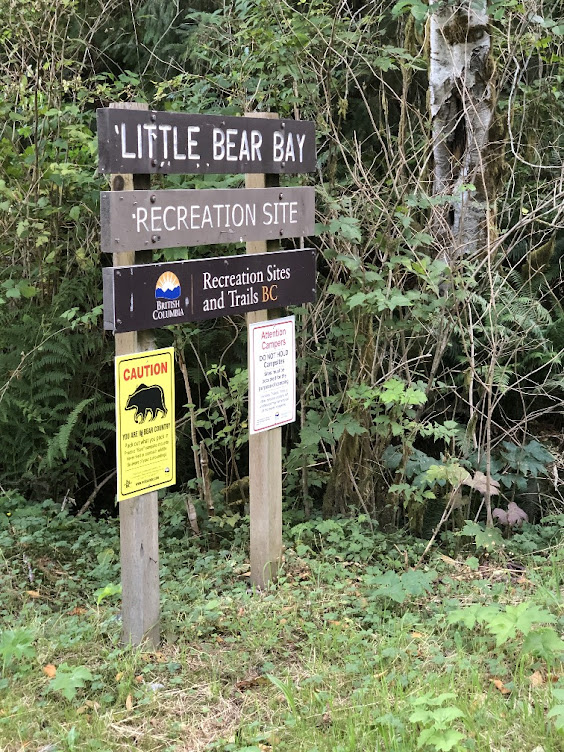 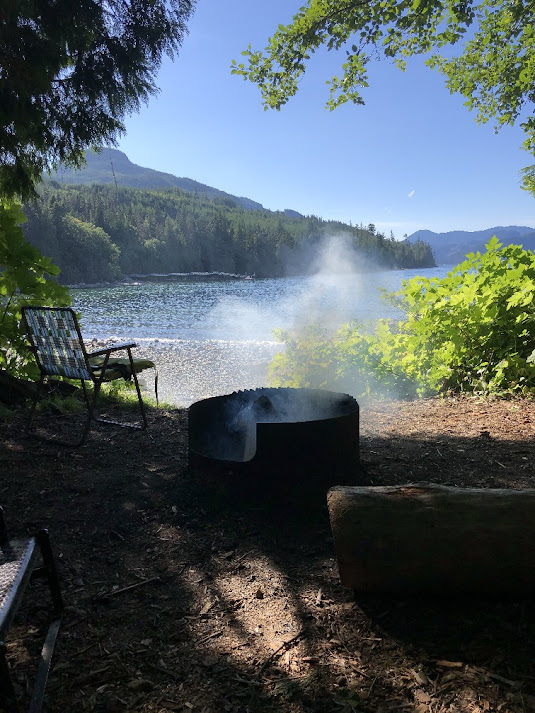 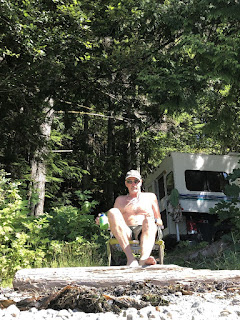 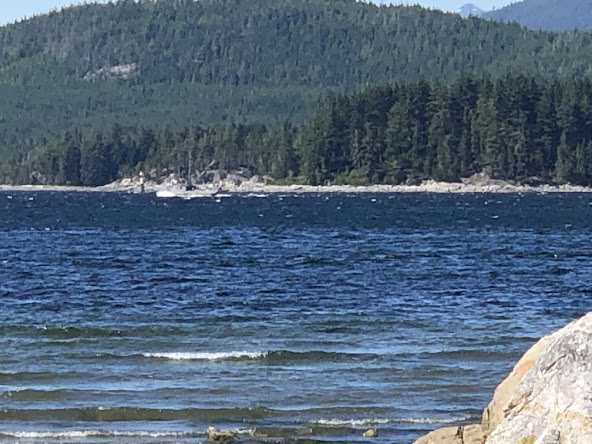 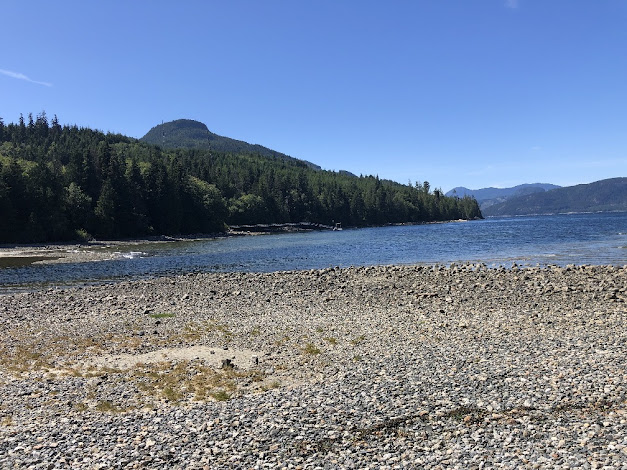 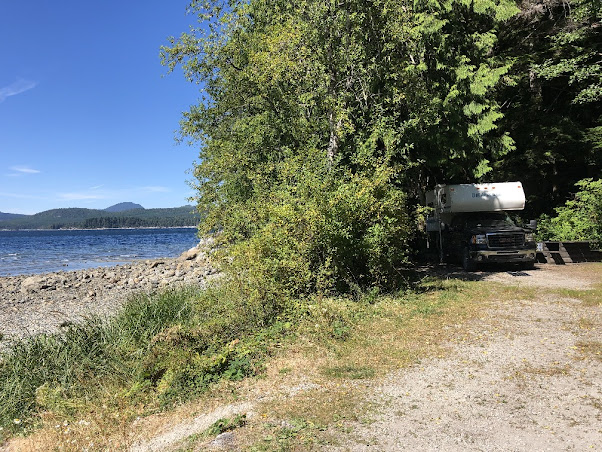 I needed a long cord to get my solar panel out into the sun. 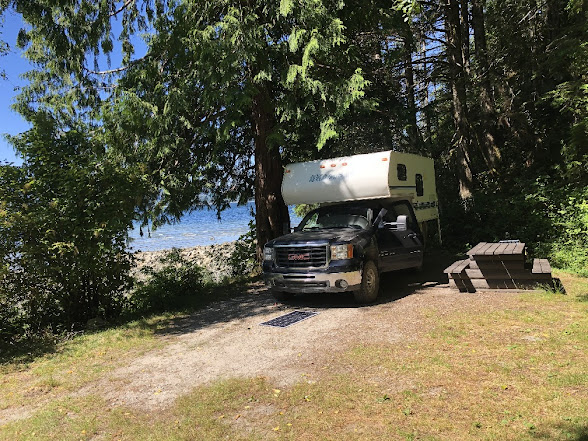 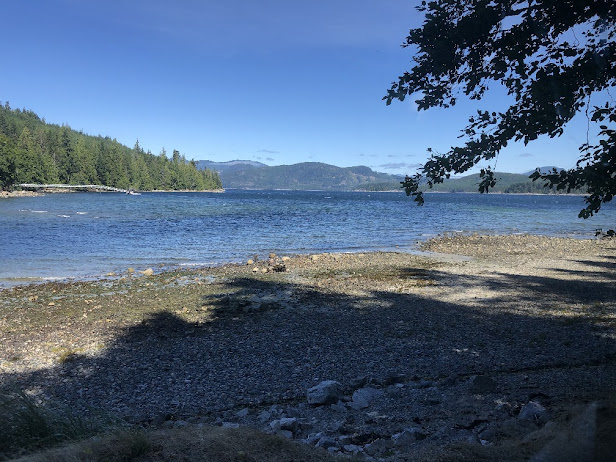 Bonus was watching a couple of dolphins jump clear out of the water, as I watched barges being towed to and from Alaska.  And there were even drabs of cell service!

Next day we got to explore another logging road down to the waterfront.  After about 17km there was a log dump operating in the small bay, but the camp spot we were interested in was further down along the coast. 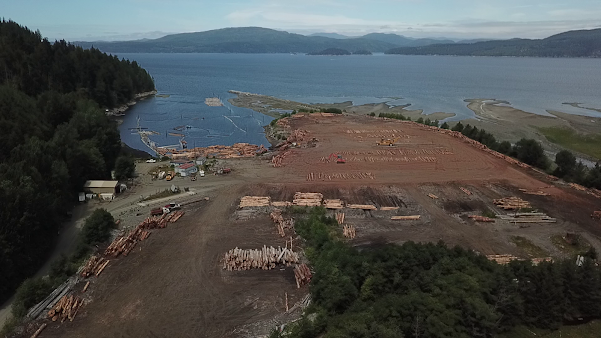 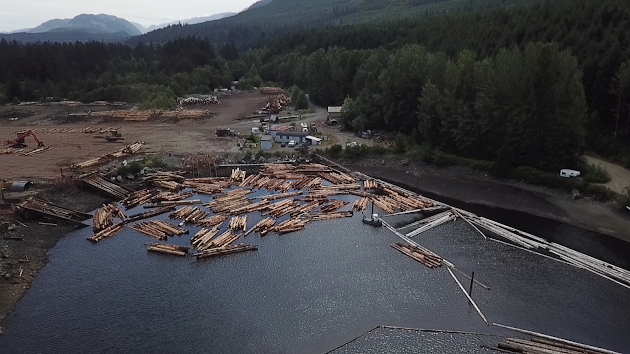 Many of these roads bear signs declaring that there is an active log haul in progress.  In many cases, you can tell that the last log haul there was in the 1990's!  Well, this one really meant it, and I pulled over behind an unloaded log truck headed up - while a loaded one roared by us in the other direction!  It was an active radio-controlled road, but I knew that as long as I was behind the 'empty' I'd be OK, and just pull over when he did.  Unfortunately this guy was paid by the load and not by the hour - either that or he had recently been a Nascar driver!  I tried to stick close to him in the billowing clouds of dust, which meant I could barely see the road - and could not see any of the substantial bumps coming.  It was far faster, rougher, and dustier than I would like.  Eventually, managing to stay on the road we came to the destination rec site. 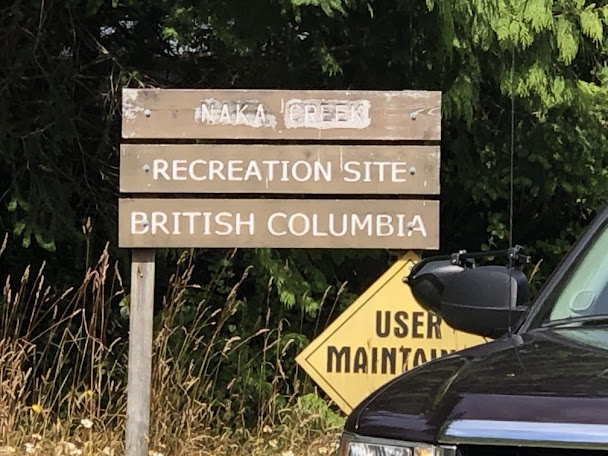 I was very disappointed to find that it was a very popular place with the locals, and kids, and dogs, and boats, and noise.  There must have been at least 30 rigs there.  Might be fine for a family campout, but not my style at all, so after a U-turn, it was back out to the racetrack - I mean logging road.  I could have dug out and programmed my two way radio, but right in time, two government type pickups came by headed my way.  With their permission I followed them back the way I had just come, luckily with a bit less speed and dust.  Managed to miss a couple of the pot holes at least.

Back on the main highway, we continued on north, checking out a few more back roads that did not pan out.  We soon found ourselves in Port McNeil, and after a bit of snooping found a waterfront spot just out of town.  It looked like it could be an occasional party spot, but we had it all to ourselves, with a good view of the ferry crossing over to Sointula on nearby Malcolm island. 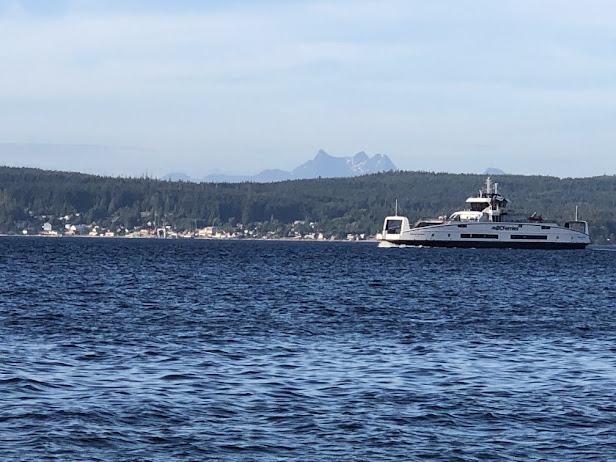 A few whales spouting offshore added to the coastal ambience!  Hailey was still on multiple medications after her latest hospital stay, but that did not deter her from getting out for a hunt along the shoreline. 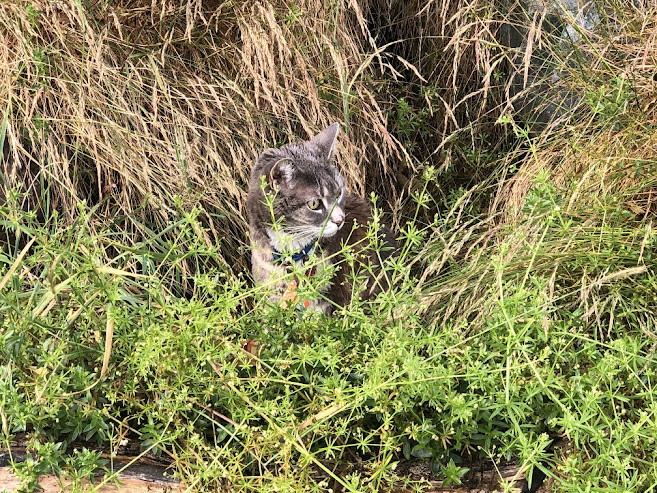 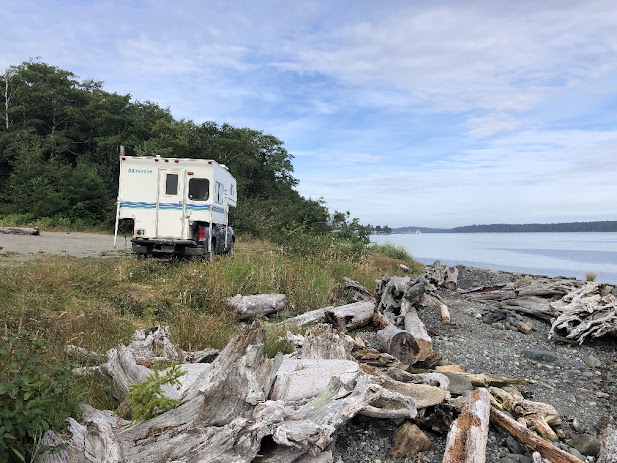 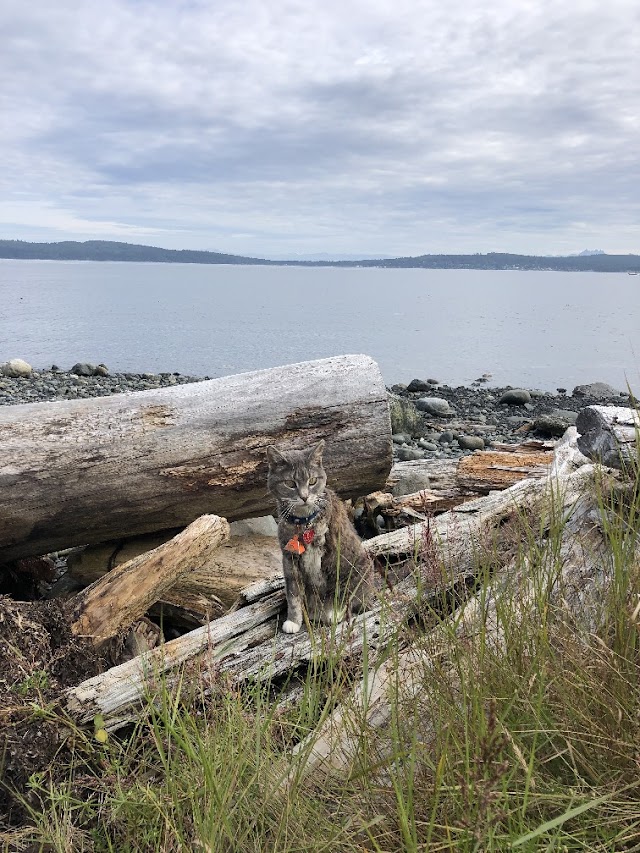 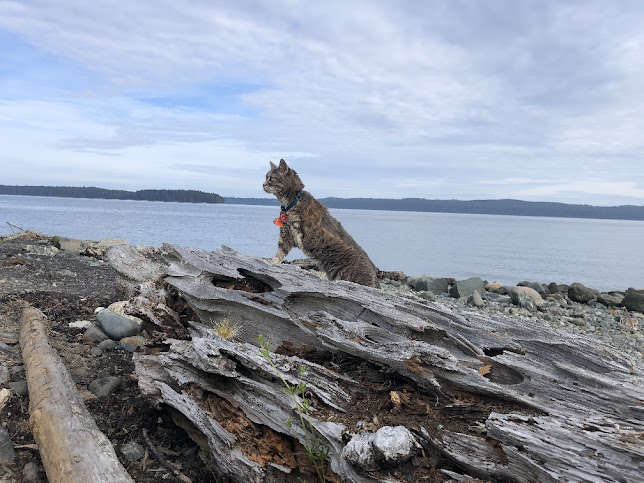