We spent the best part of two weeks camped near Baker, Ca after Hailey’s surgery.  We made one run back into Vegas for some antibiotics that we eventually decided were not worth the fight.
(Saw this unique repeater set up in the back of this truck near the scene of a big off-road race that weekend) 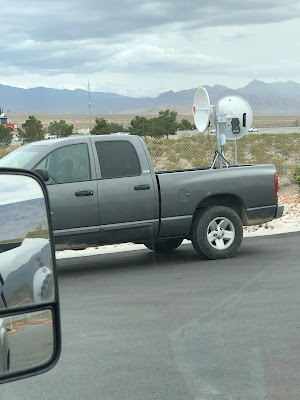 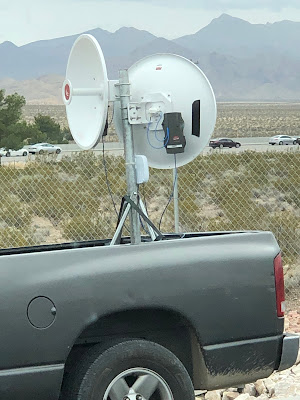 After almost two weeks we had another appointment back in Vegas with the surgeon so she could check on Hailey’s progress.
She was very pleased and said we no longer had to restrict her movements, no more wearing a cone, and no further visits were required.  The stitches will degrade on their own in time. 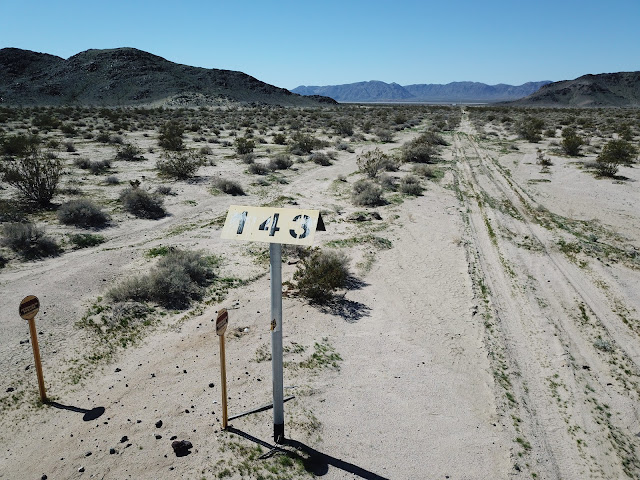 So, for the first time in three and a half months, we are free to make plans that do not include the distance to the vet or the next appointment!
She has lost about 4 pounds over the winter, and is pretty thin at present, and is not eating enough yet.  But with the help of appetite medication and a whole assortment of new and exotic foods, she will hopefully be able to put some weight back on.
Being free to travel again was such a ‘new’ concept, we didn’t have a plan in place on where to head next.  So we just moved down to the Kelso Dunes area in Mojave National Preserve.  Clearly the AT&T coverage map needs a bit of work and no decent coverage was found in the area, but at least I got to hike up the dunes after some rain showers had passed through.  There was this one single flower blooming along the trail through the dunes. 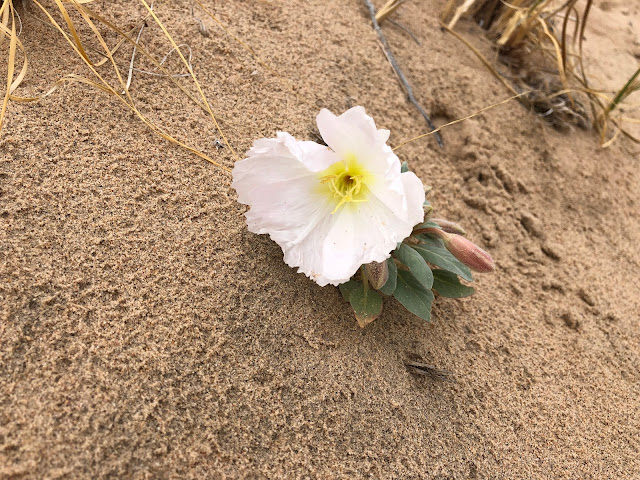 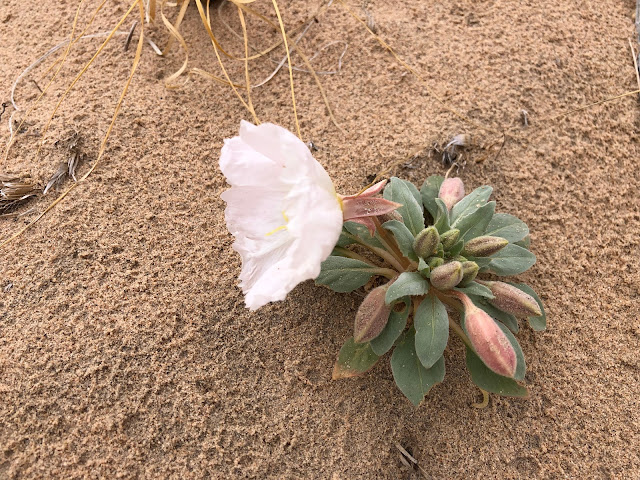 A rather unique European style camper pulled in while we were there. 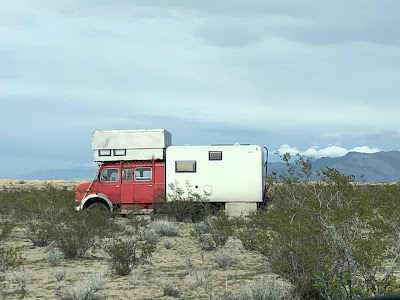 Like normal, Hailey still wants to get out hunting at every opportunity. 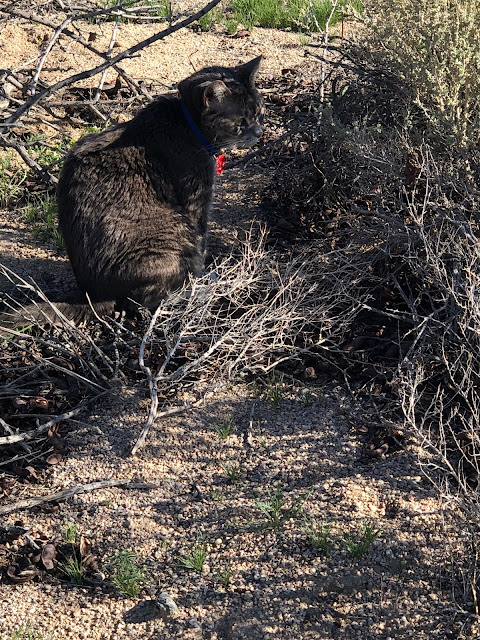 We found an overnight spot near an abandoned radio tower. 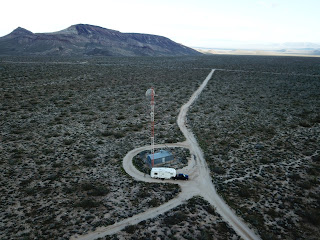 Even though weather reports from back in Alberta look encouraging and above normal, we are not about to be tricked into heading north just yet!
So we headed back down to Lake Havasu. With Hailey’s care no longer completely dominating all hours of the day, there was finally time to get the new glow plug installed in the big GM, and time to get out for a few hikes.  One of my favourite trails is the one leading up Lizard Peak, or Table Top mountain as it is known, because there is a picnic table at the summit.  At the top there is great views of the surrounding area, including the city and the lake.  Even the table has been upgraded since last year and now sports a new metal top and new wooden seats! 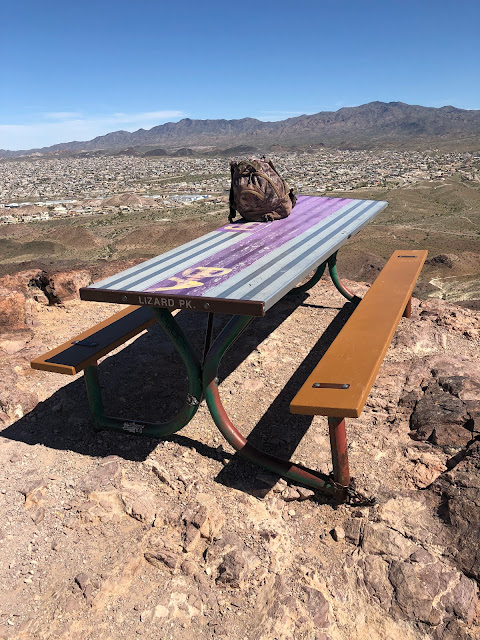 From there it was down to the water – at Mockingbird wash.
Lots of flowers along the way, and some wild life. 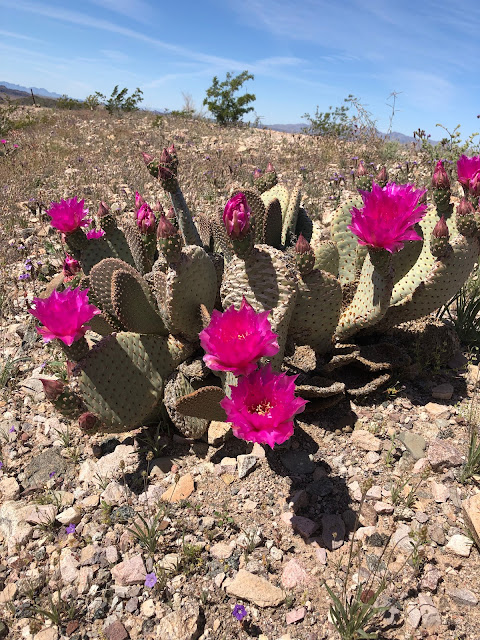 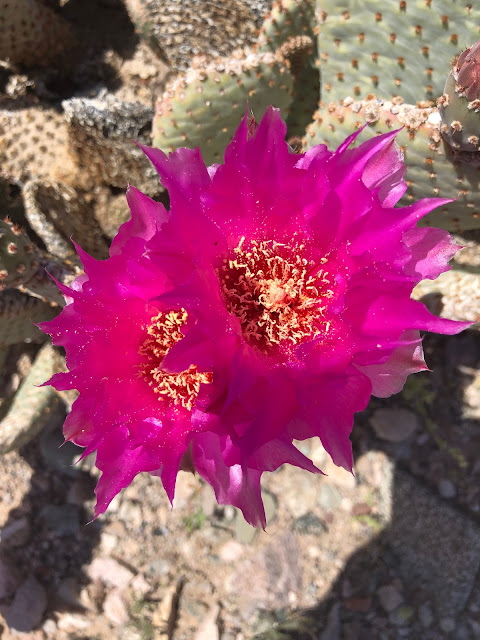 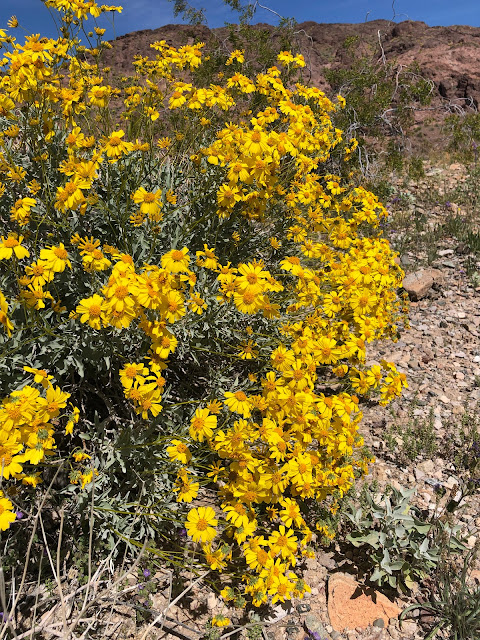 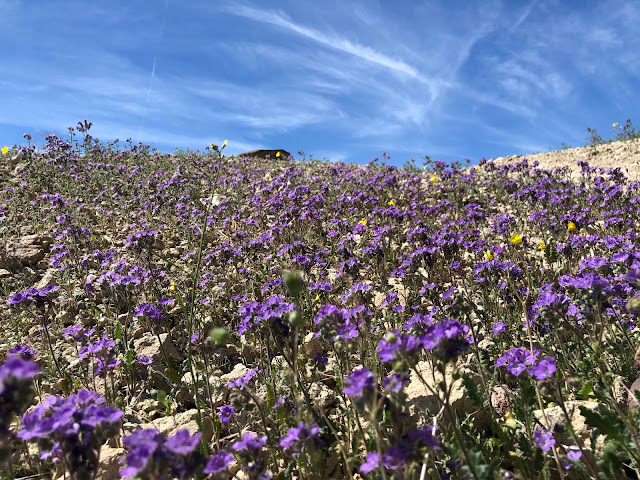 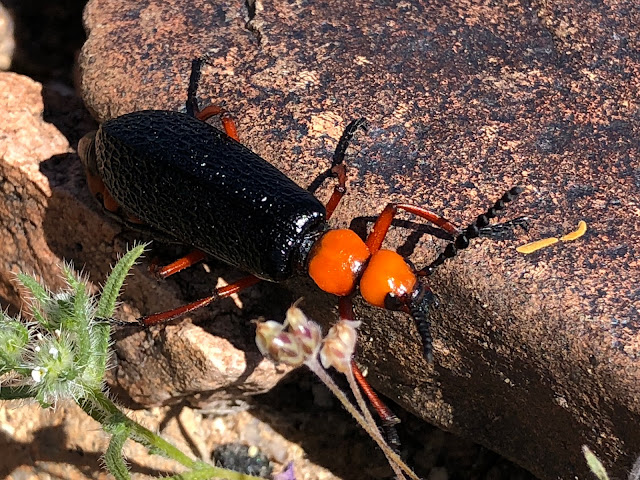 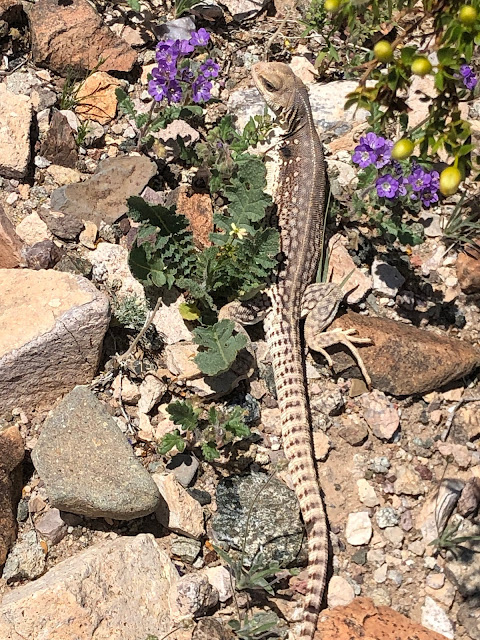 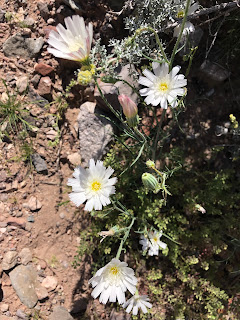 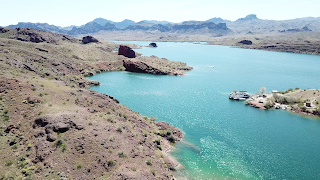 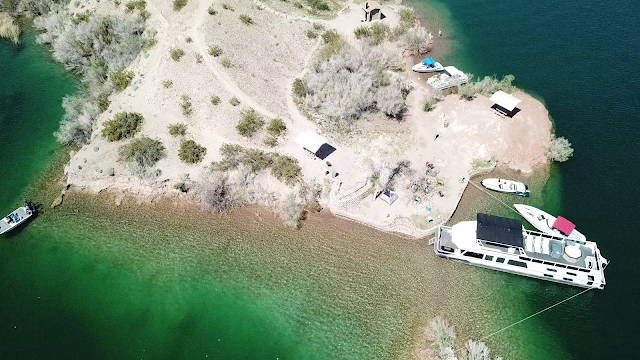 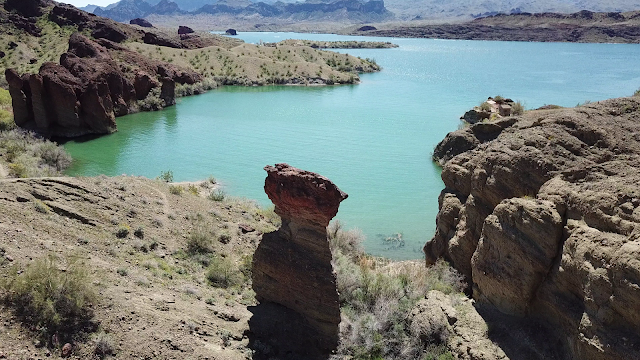 Down at the ‘channel’ Spring Break was happening, but not nearly as busy as I’ve seen it in previous years. 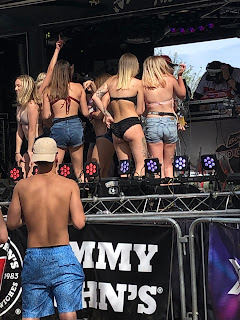 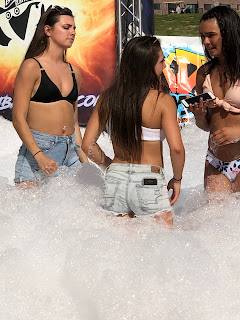 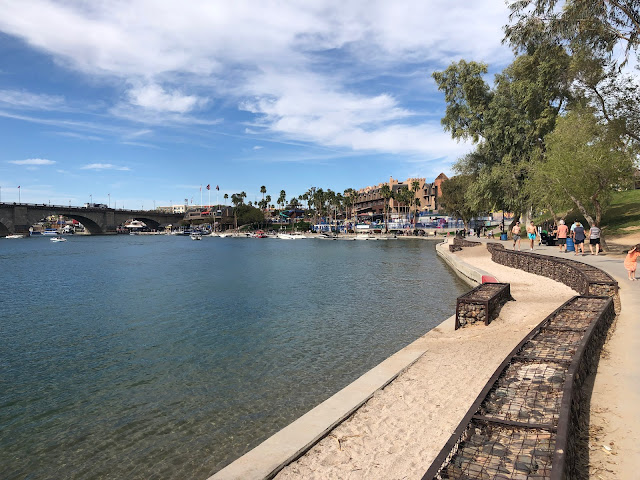 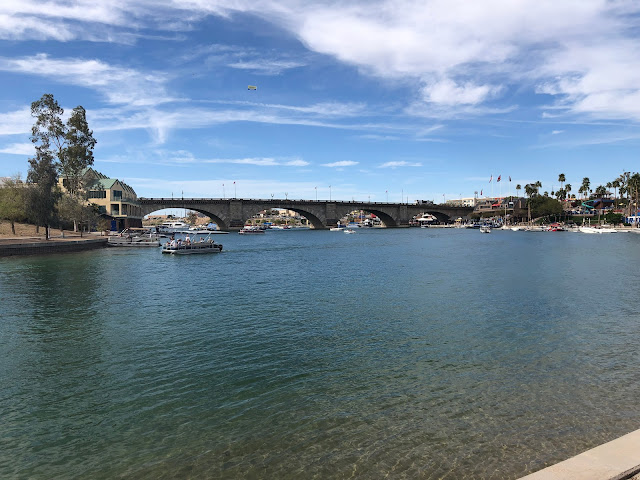 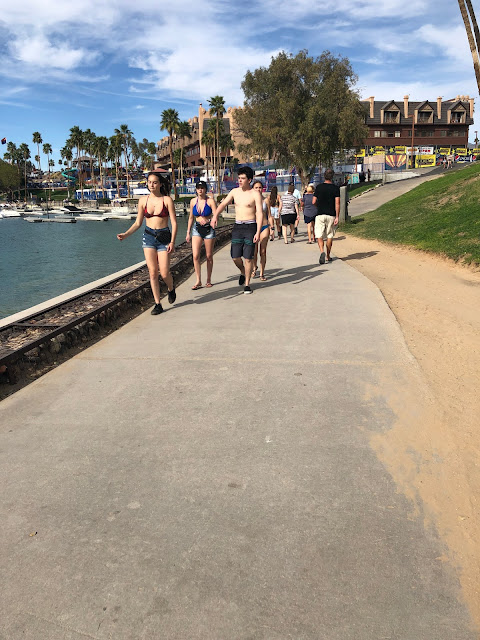 Meanwhile, back in camp, Hailey is perfecting new hunting techniques on 3 legs. 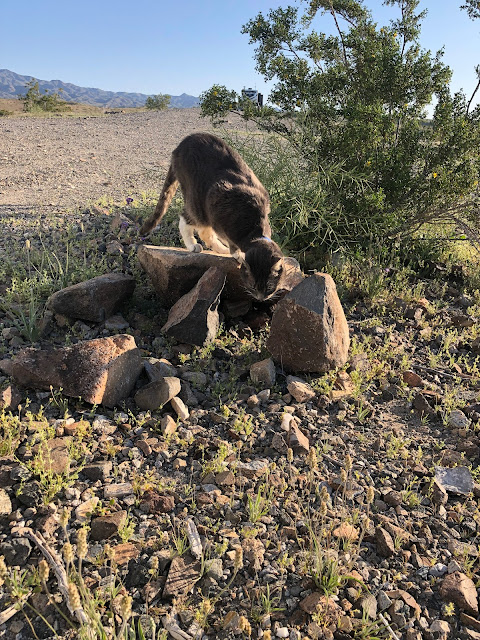 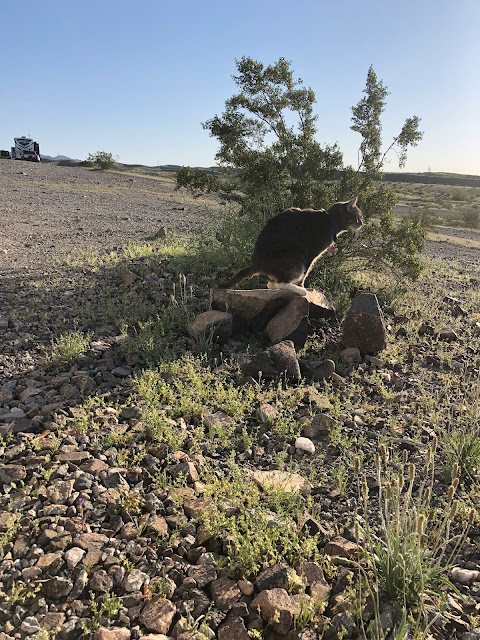 She doesn’t seem too concerned about it all, but for some reason she is not yet eating as much as she should.
There’s very few campers right now at the Standard Wash BLM site, but I discovered a lot of rigs on the Arizona State Trust Land between the Walmart and the lake.  I’m sure there was no one camped there back in the days when we used to camp at Craggy Wash.  It’s a long ways from the SARA park and trails, but it looks like the spot might have promise for the future if it doesn’t get too crowded.  Very handy to the north end of town, Walmart etc. and I already have my annual permit.
I’m sure we can keep busy for a few more days around the lake as long as this beautiful weather continues, but come the start of April I guess we’ll have to start moseying a bit northward and try to come up with an interesting route homeward bound!