While boondocked in the desert of the Mojave National Preserve near Baker, Ca we had some variable weather, including a closure of the nearby I-15 due to snow!  It rained some in camp, but that was the extent of it.  Two groups of friends stopped by while we were here.

Hailey’s leg sore was still not healing, so we made a 4 hr roundtrip visit back to the vet in Ft Mohave, Az for another weekly antibiotic injection.

Managed a few short hikes – down a pipeline r/w to have a look at the facilities.  Some pretty impressive solar systems must be powering some monitoring equipment. 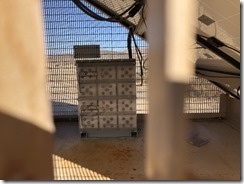 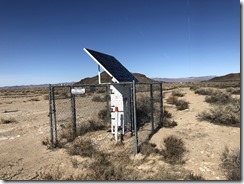 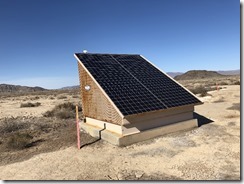 Don & Donna headed off to check out Nevada Telephone Cove on Lake Mohave after a few days camping with us here.

While more or less stuck around camp it was a good time to check the battery water levels, check on some loose caulking, and reinforce a corner of one of the slides.

While on another short hike, I spotted this truck camper hopelessly bogged down in the sand.  While I watched, it appeared that a tow guy showed up to assess the situation. 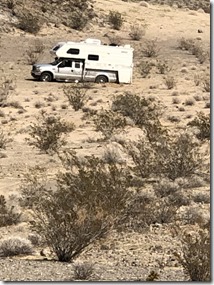 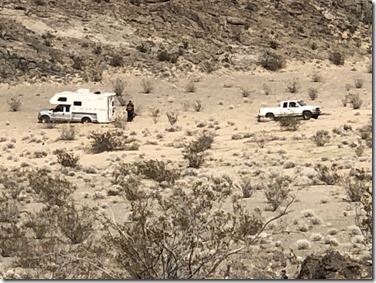 Not sure if this old real estate sign indicates some private land within the Preserve, or just an old relic of times past? 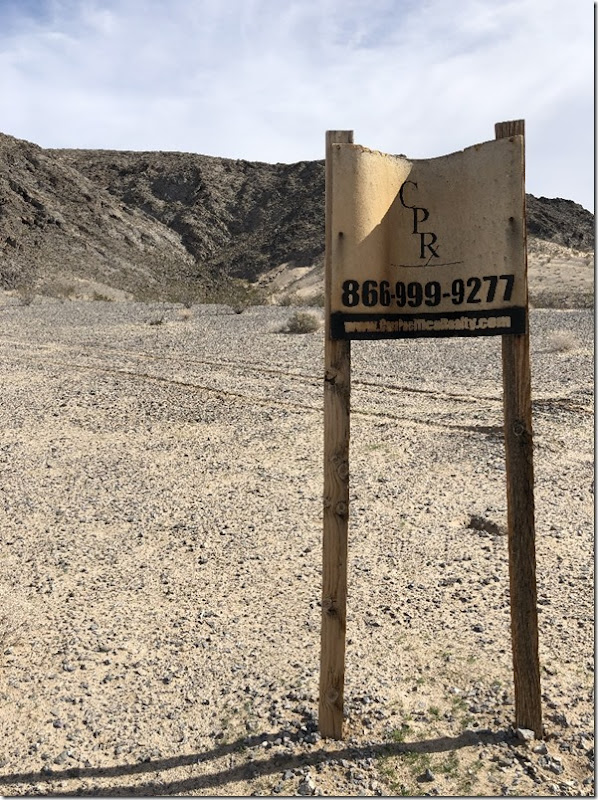 It was nice to finally have some real warm weather to enjoy.

Just north of Baker, on the road up towards Shosone, I found some signs leading in towards Ft Irwin. 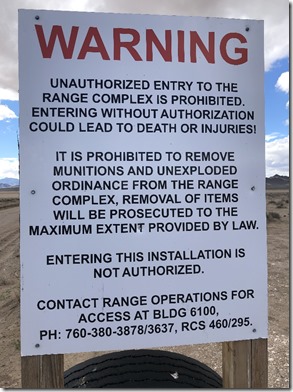 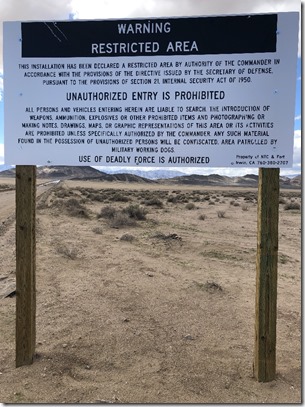 Not being a big fan of death or injuries, or deadly force (plus, the road appeared to be flooded!), I went elsewhere to look for potential camp spots in the area.  Not long after, following a nicely graded, completely unsigned road, I found myself approximately 2 miles directly behind these signs – at an actual gate leading into the range!  It serves to prove my point that signs often don’t really mean what they say.

With another vet appointment in Ft Mohave on Monday morning we took advantage on Sunday to move a little closer and attempt to meet up with Don & Donna again over at NevadaTelephone Cove.  It was a warm and calm evening on the beach, so we enjoyed a nice fire – in my metal fire pan of course.

With the ugly sore on Hailey’s paw now my chief concern – not healing for 6 weeks and counting, we were off to the vet for some answers.  As well as not healing, the ankle now looked like it was dislocated as well, though she would walk around on it apparently unconcerned.  Once again, she was sedated (I think this was 5 and counting) and had x-rays of her leg.  As expected, it was badly dislocated. 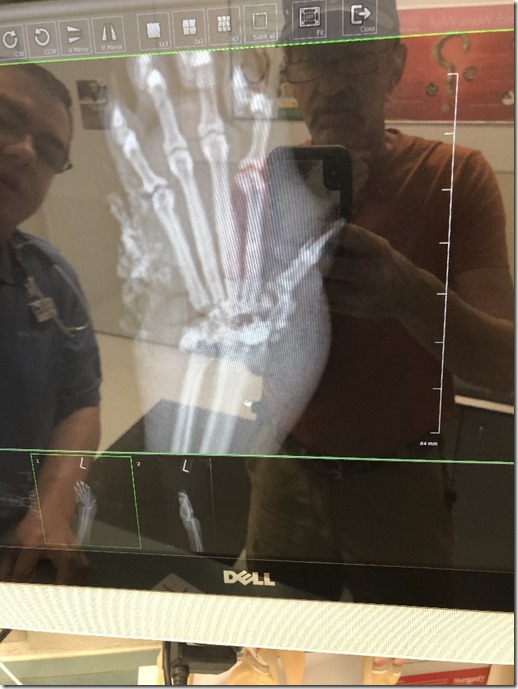 Two options were offered; have the ankle plated and pinned, or – amputation

They bandaged it up nicely and we were off. 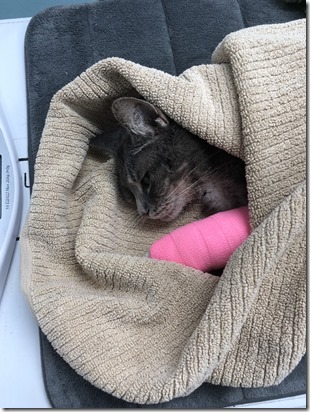 We returned to camp, packed it up and moved to Vegas where the vets are capable of such procedures.  It is good to know that these vets are open 24hrs a day, 7 days a week for any emergency treatments. The vets and surgeons there explained the options. Putting a plate in her ankle would be very complicated, would have a very long recovery period, with various screws and things sticking out of the ankle to tangle in furniture, bedding, etc.  It would require numerous more vet visits over the next 8-10 weeks.  But most importantly, if the present wound was not healing without any surgery, there was no assurances that it would heal after even more trauma.  So even after all that time and pain, she may end up losing her leg anyway.  They said that simple amputations tend to heal quickly and that cats are very good at adapting. So with heavy hearts, we bid goodbye to her cute little left front leg – with the ugly open sore and misaligned foot.  They took her right in, but I was able to briefly visit her next morning before surgery. 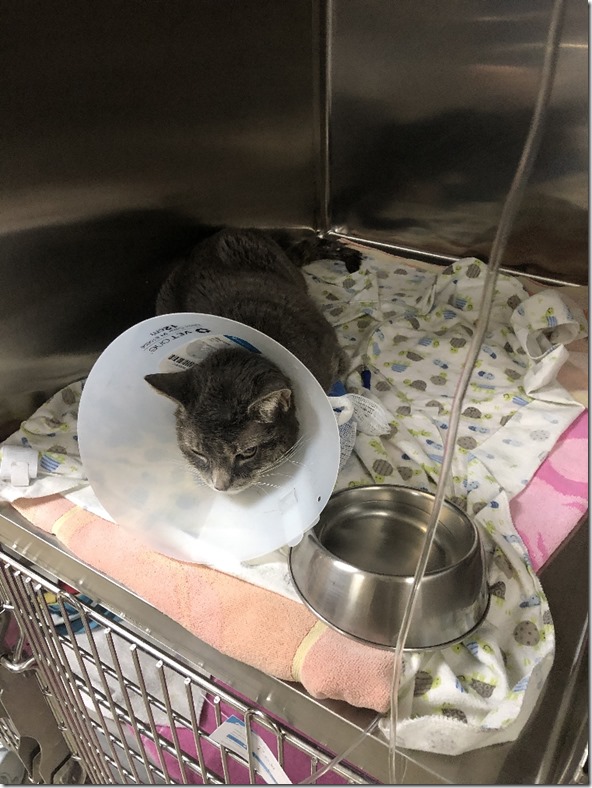 The next 24 hours was spent frantically trying to deal with daily/weekly limits while transferring enough cash to cover the procedures, and hanging out at about the only Walmart in Vegas that seems to permit overnight campers.

The day after surgery, the surgeon called to say that everything had gone well, she was up and eating and attacking everyone in sight!  That was good news!  I picked her up as soon as I could make it there.  It took her about 30 seconds in the truck to tear off that cone!  I put it back on and I tried putting her in the carrier that she normally used for helicopter flights, but she flung the cone into the back corner, and seemed content as long as I didn’t try to close the door. 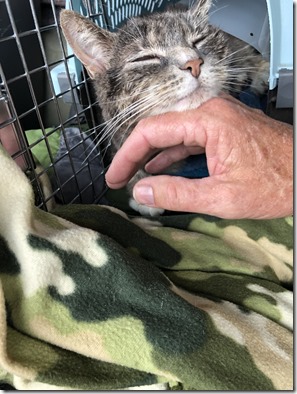 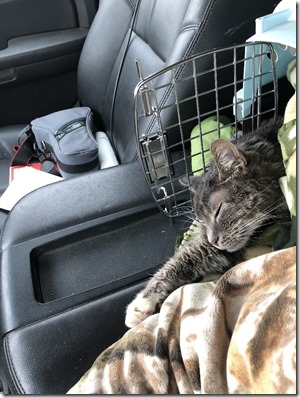 Needing a quiet place to recuperate, we moved back out to the Mohave National Preserve.

She hated the cone, of course.  I’m sure she could have managed it Ok with four legs, but trying to learn how to walk on 3 legs with that thing hanging around your neck was too much to ask.  I quickly designed a ‘cape’ for her with a wash cloth and a safety pin.  Its not perfect, but seems to work OK.  I did get her an ‘infant’ T-shirt when back in Vegas to pick up some more meds, but she didn’t like it at all.  She’s good about not licking the stitches, and she only wears the cone sometimes at night.  So far it seems to be healing really well, and she is learning to get around fairly well.  Getting her to eat enough is still a challenge, but after not eating at all for two months, every mouthful is a bonus.  Likewise, she did not groom herself for almost 3 months, and now she is making up for lost time. 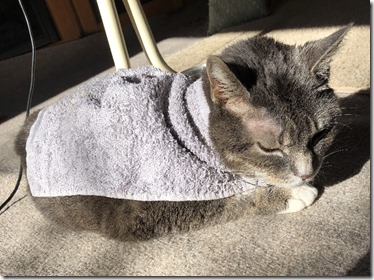 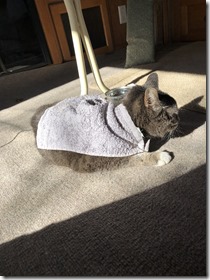 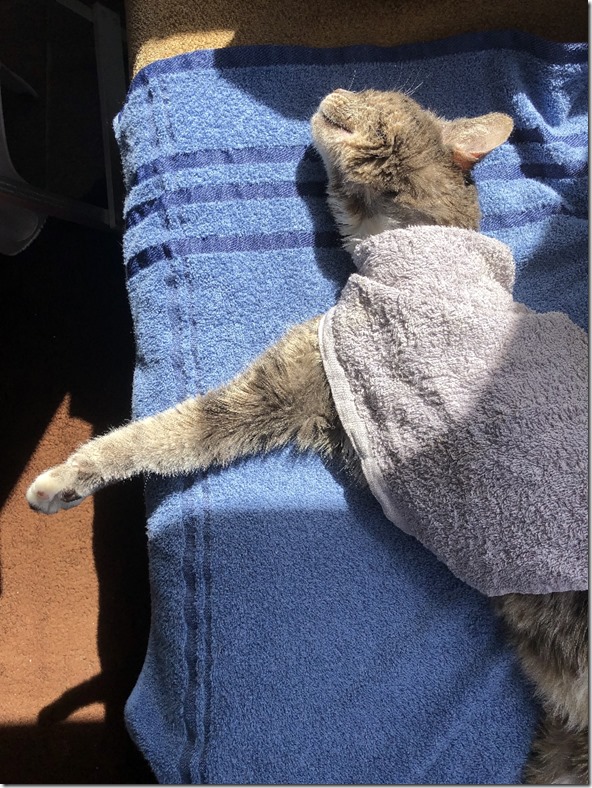 Hoping to get her ‘get out of hospital with no cone’ approval this weekend in Vegas if all continues well.  But after all the other setbacks, I will not be surprised if a whole new issue appears out of the blue.  That’s just her luck this winter – ever since November 30th!

But if not, – it might just be that we can plan to go somewhere again that doesn’t involve any vets!