Toasty warm to Freezing cold, and back again!

Seems like it was about Boxing day when I last sat down to update the old blog!  So I guess it’s about time to do so again.

After leaving John & Brenda’s with a full load of Christmas turkey leftovers we wandered down southward from Maricopa, Gila Bend, and then down to Ajo and Why to see if we could track down Wandering Willy or anyone else we knew down there.  I suspected he might be in at Gunsight Wash.  I don’t really like towing a rig in there blind, as there are a lot of ugly little washes and dead-end trails that can sneak up on you.  So, I unhooked out at the highway and drove the truck in for a surveillance mission.  Just about the time I spotted the elusive Wanderer and his companions Frank and Alison, was when I heard an awful scraping sound as an unseen branch left it’s mark on the paint job!  After scouting a good spot and a safe route in, I found a great spot along the wash and pulled in to set up. 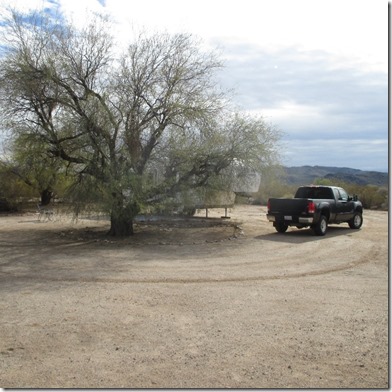 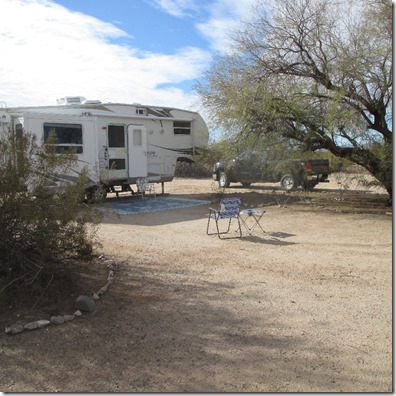 I set up Hailey’s ‘entertainment centre’, and soon had flocks of feathered ‘entertainers’ willing to perform for a few seeds or some sweetened water. 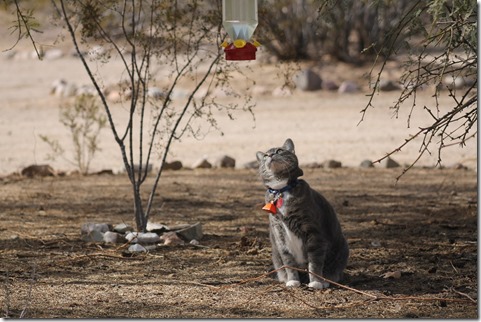 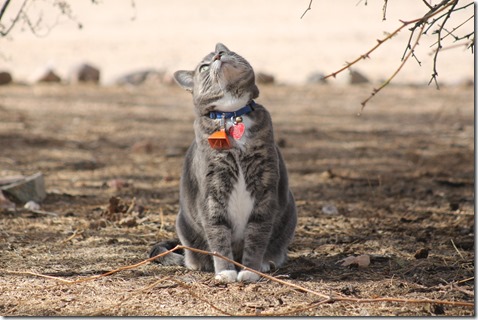 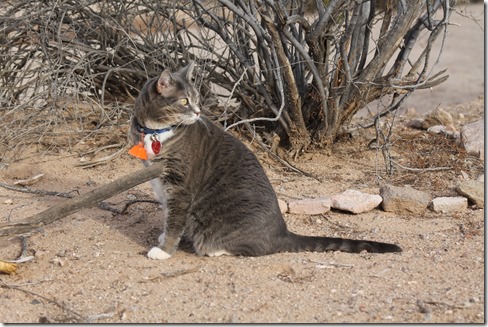 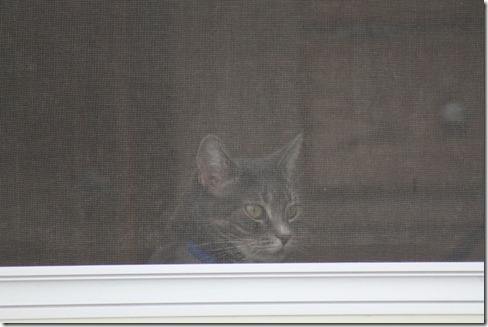 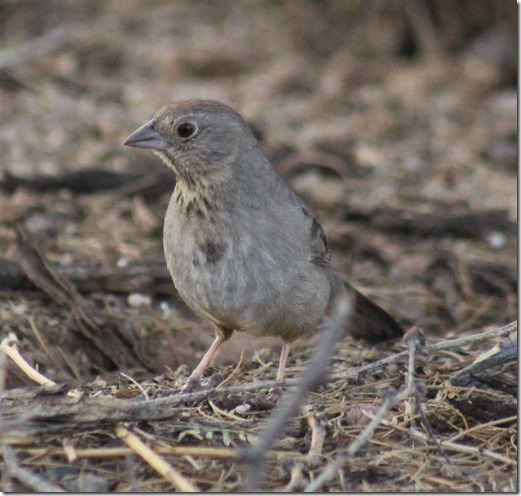 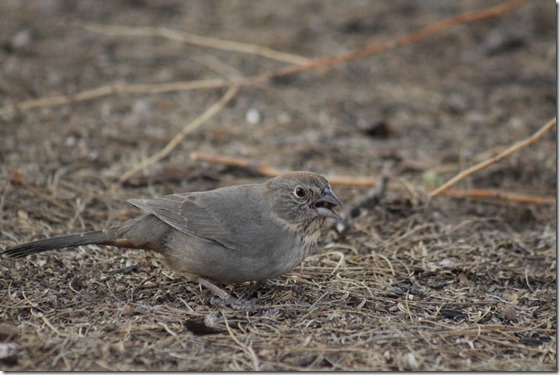 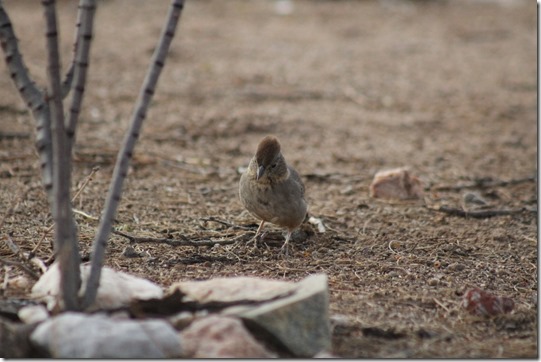 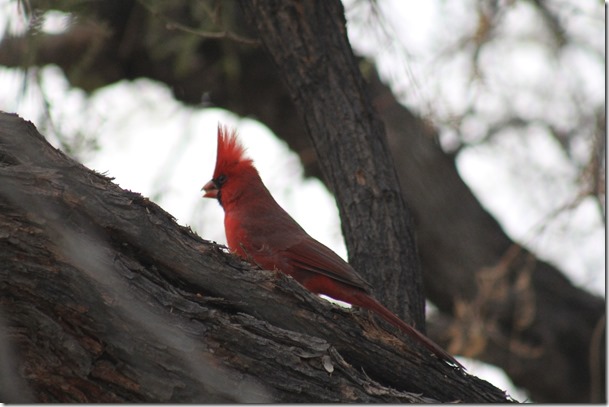 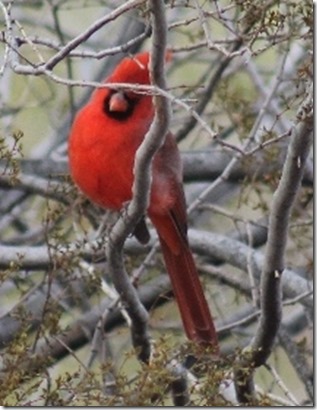 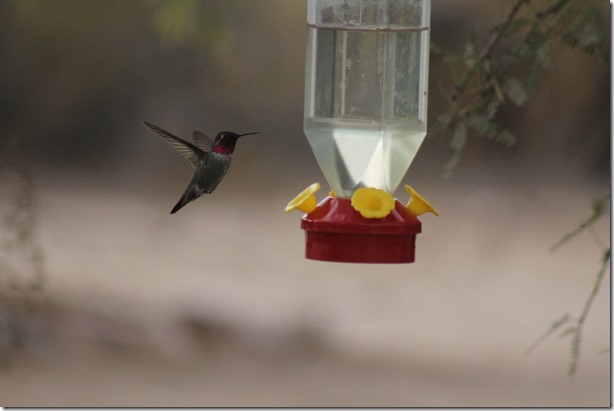 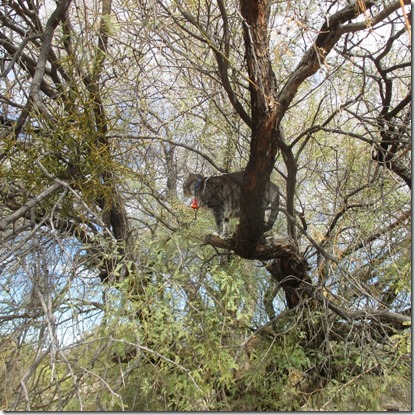 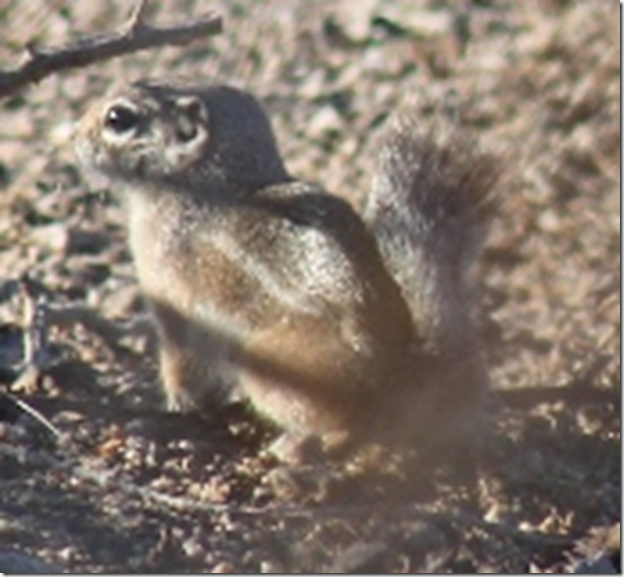 One day there was a strange sound from the direction of the wash, and Hailey decided that it would be a good idea to go indoors and watch from a window.  Sure enough, as I watched, there was a group of individuals dressed in black hiding behind the trees as they moved along, trying to stay out of sight.  There are signs in the area warning of illegal immigration and smuggling, and I was immediately certain that none of those in the bushes possessed a valid passport.  I spoke to them briefly, but none of them seemed to understand English … 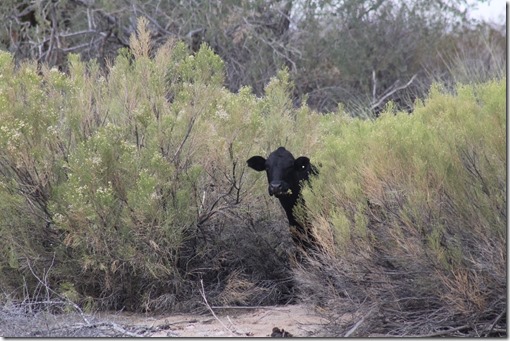 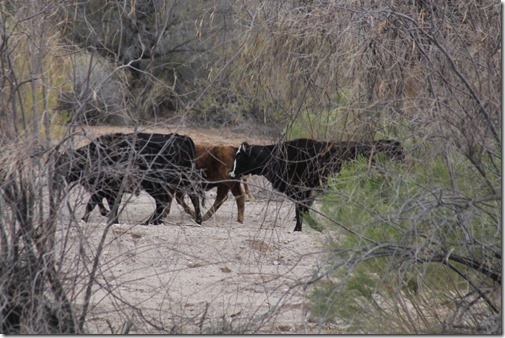 While enjoying a couple of late happy hours with Bill and Frank, we noticed some strange blue flashing lights way out in the desert to the south, that would flash every 9 or 10 seconds …  The next day, I went for a drive to the south to see if I could find the source, but found nothing.  It was when reading the newspaper and googling that I discovered that these are in fact Border Patrol emergency rescue beacons.  There have been a lot of illegal migrants perishing out in these remote desert areas due to lack of water, illness or extreme heat and cold.  So, the BP has established a number of these ‘panic poles’ in remote locations.  They are solar powered and by pressing a button on the pole, the border patrol will be alerted and will provide rescue services.  They have been credited with saving numerous lives in the region.

About the time that Bill and Frank decided to move on, I received word of the passing of my 98 year old aunt in Saskatchewan

.  Initially, I thought there was no way I could make it back, but after some consideration and John & Brenda’s kind offer to look after Hailey and let me park in their spacious yard again, I was able to make arrangements.

Of course, I don’t have much for cold weather clothing down here in the winter, and I would not be going anywhere close to my northern house, but managed to piece together my warmest T-shirts and sandals, and was soon on the way north.

Or more accurately west, as the first leg of my flight was to LA.  But I got an window seat and was able to have a good view of some previous camping areas around Bouse, and all the way up to Lake Havasu, before rainy weather a clouds in LA obscured the view.

Spotted this guy perhaps headed for San Diego (?) as we flew above him. 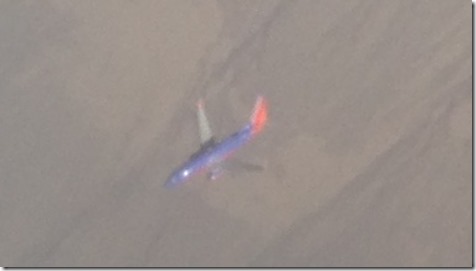 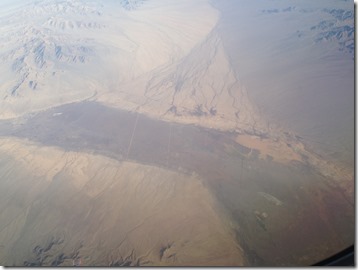 It was poor visibility coming in over the coast to land in LA – then I almost lost sight of the wing!  Due to delays in LA, the flight from Phoenix was late starting, then we had to sit on the taxiway in LA till a gate came open.  Many people with connecting flights had already missed their connections.  So I was feeling pretty smug with my 3.5 hour turnaround! 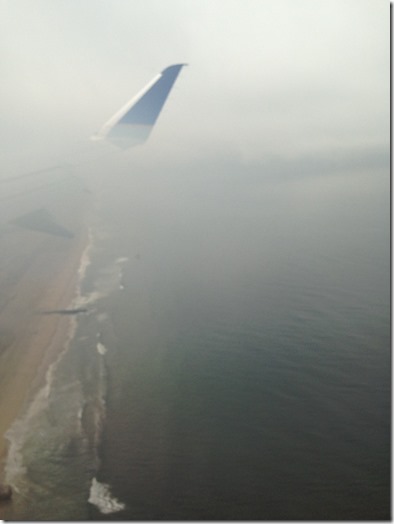 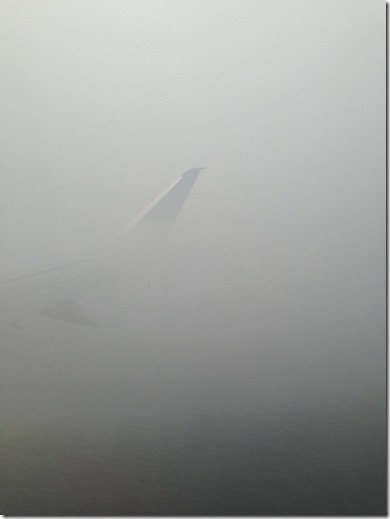 It was quite a shock for my system to walk out of the airport in Saskatoon into temps around –20, but I managed to survive somehow

It was great to see a whole lot of family, some for the first time, even if it was for a sad occasion. 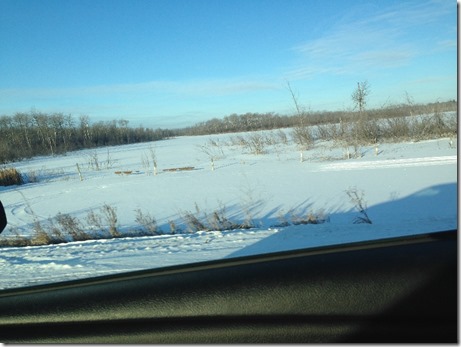 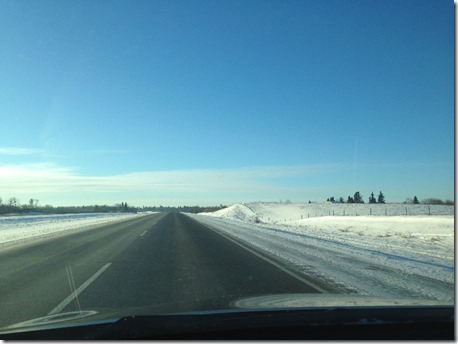 It was –30 in Prince Albert when I got up, but the little rental car started without being plugged in.  And it got me safely back to the airport in Saskatoon – where I was shocked to discover the free wi-fi was running at 70Mbs! 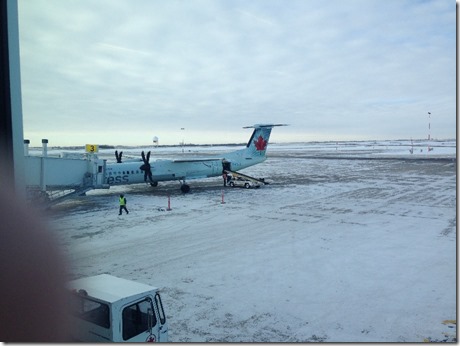 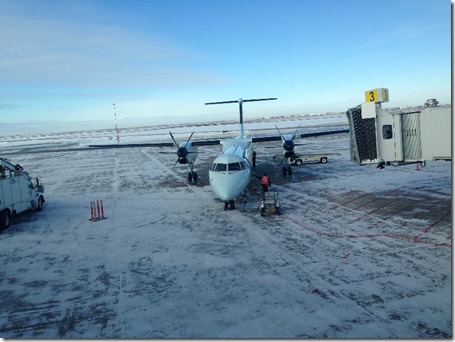 Got a window seat on the Dash 8 (?) flight back to Calgary, and was amazed that my iPhone photo managed to freeze the motion of the prop in flight. 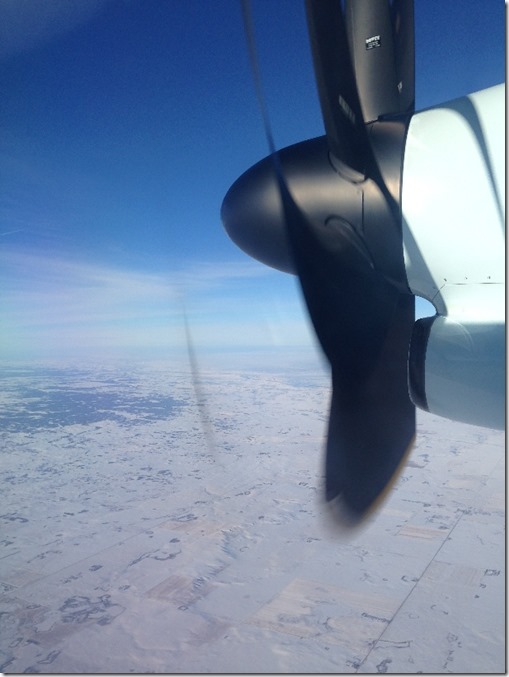 Of course it was still about –15 in Calgary so we had to splash some nice green de-icing fluid on the wings. 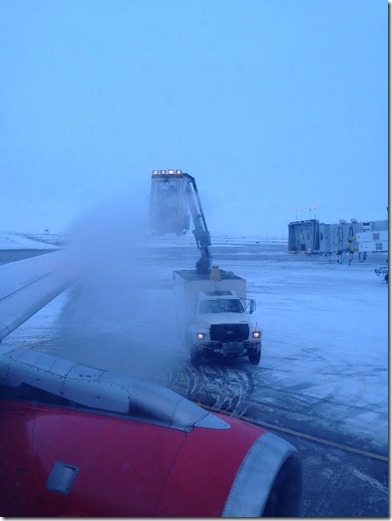 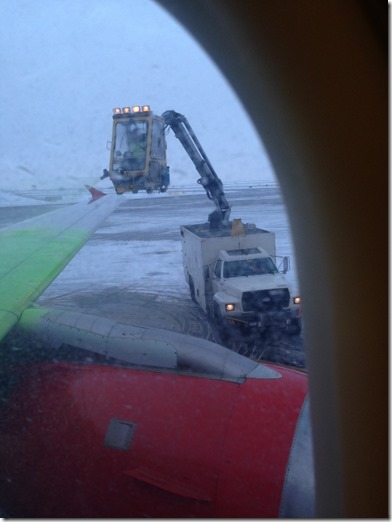 It was a relief to get back to the warmth of Phoenix, and if the purring was any indication, Hailey was glad to see me back again too!  Brenda said she’d been greeted with hisses when dishing out the food during my absence!

A quick look at the map, and we were off on the road again, but only as far as the Painted Rocks Petroglyphs site north of the I-8, west of Gila Bend.

From here, it looks like we will be spending some time in the Yuma area, until it is time to head on up to Quartzsite to take in some of the huge RV show, and maybe some Bluegrass over in Blythe?

Nice to see the Bayfield Bunch back on the road again – guess we missed them by a week or so as they are spending some time down in the Ajo area watching out for the A-10 Warthogs and Border Patrol.   I saw some unidentified lights hovering in the sky over Ajo when I was there, so I hope Al is keeping an eye out for them as well!  Suspect we might see them at the Bloggerfest later this month!  Other RV friends from BC and Saskatchewan are now on their way south, so looking forward to spending some time around the campfires with them as well.