We only spent two nights near the ghost town at Harshaw, because of all the mine related traffic on the road past the camping areas. 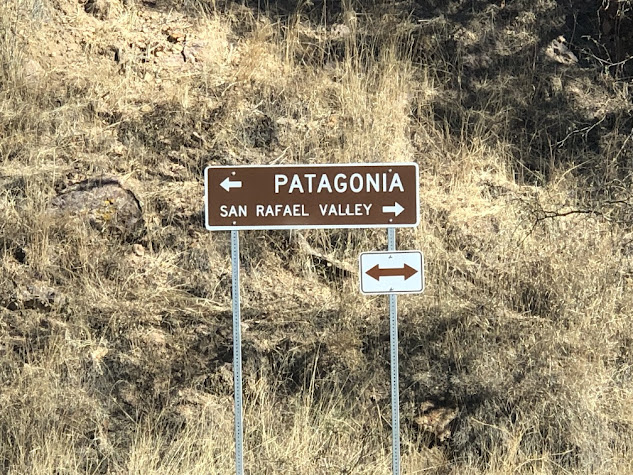 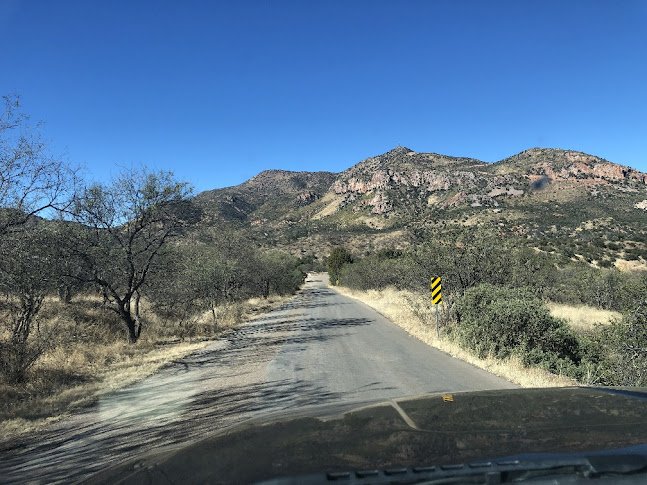 We pulled out and re-joined highway 82 at Patagonia for the short trip north-east to our next planned stop in the Las Cienegas National Conservation Area. 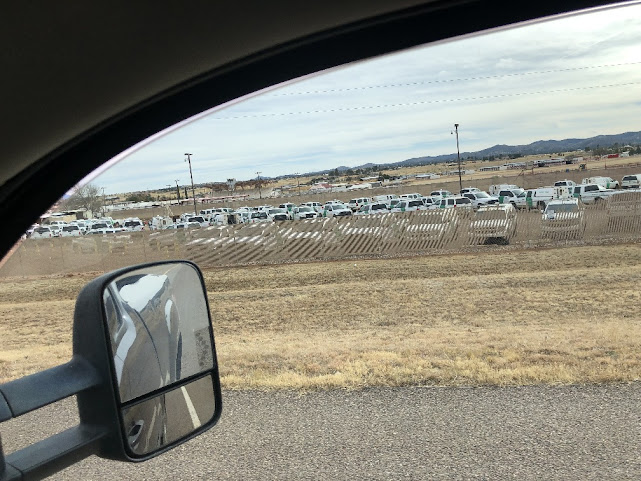 This Conservation Area is a huge ranching area administered by BLM, containing the historic Empire Ranch.  The original buildings have been maintained and restored, and are open to the public.  Quite a few western movies were filmed at the ranch, including stars such as John Wayne, who stayed here while filming. 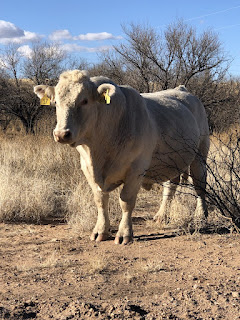 Most of the ranch area is open to dispersed camping, with the usual 14 day limit, and cattle still roam the range much as they have for well over a hundred years.  Except now, they all have ear tags.

We came across a number of these strange contraptions, scattered across the grazing area, and after consulting with others, including some ranch hands who were servicing them we found out what they are for!  They are filled with a molasses-like liquid, combined with nutrients and supplements for the cattle.  On each corner is a large wheel, that the cattle lick to get at the stuff below! 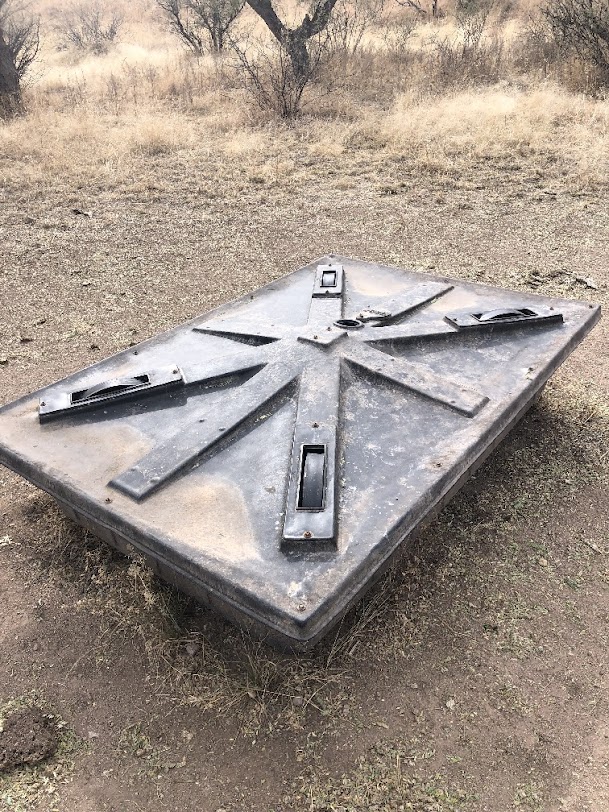 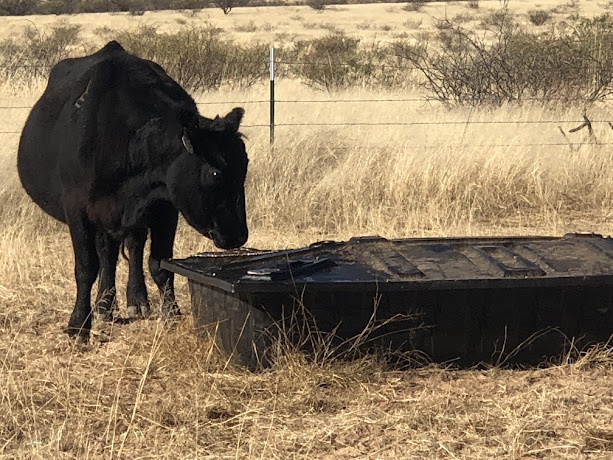 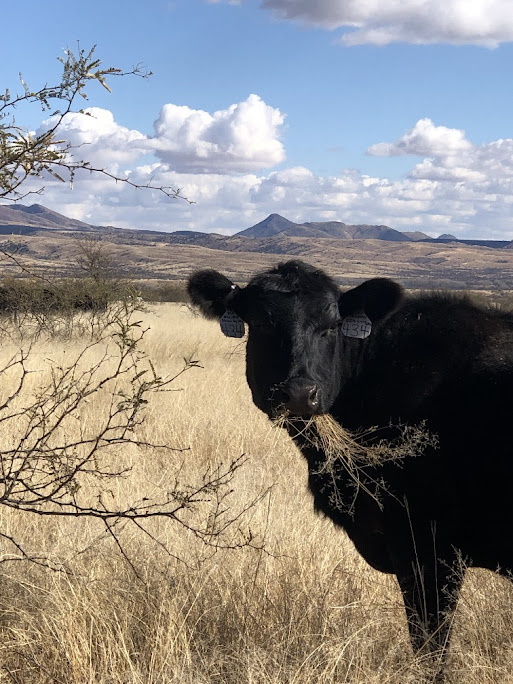 This girl was just enjoying some dry grass!


We have camped in several different areas of this Conservation Area in the past, but were hoping our favourite spot might be available!  Because the road to it is a bit rough, with few places to turn around, we dropped the rig and went to check it out first.  Luckily, it was available, so we moved in promptly, under some huge old Oak trees in the wash. 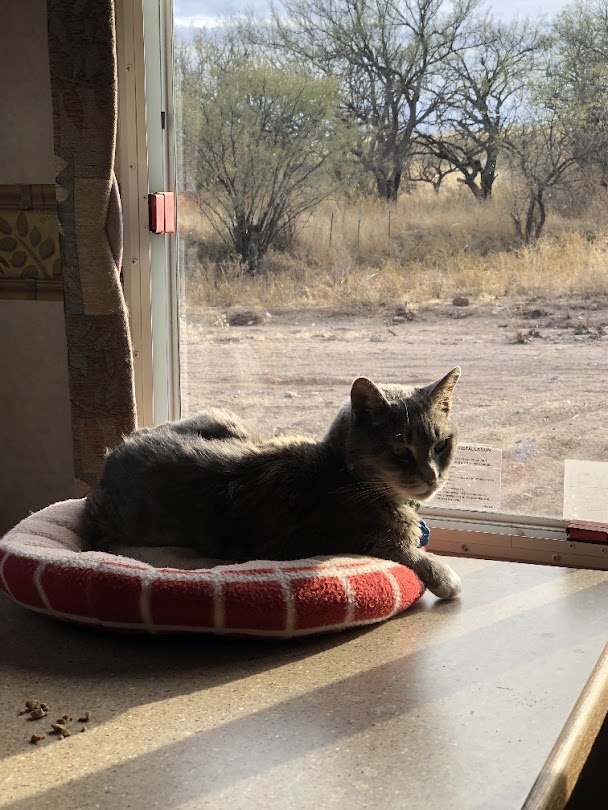 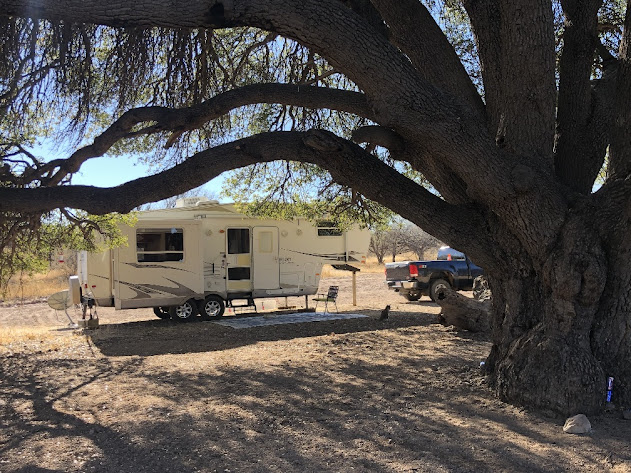 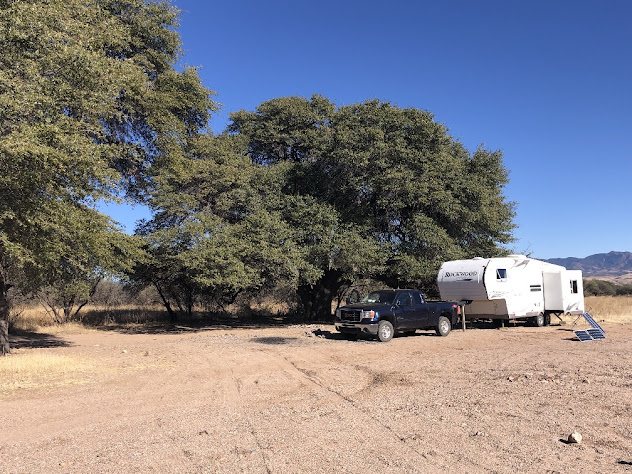 Of course, soon after parking, I discovered the scourge of random camp sites - old fire pit locations just full of old rusty nails and screws.  Out came my floor magnet, and I picked up at least a pound of nails, right from where I was parked!  Hoping there's not enough left to cause trouble on departure ;-). 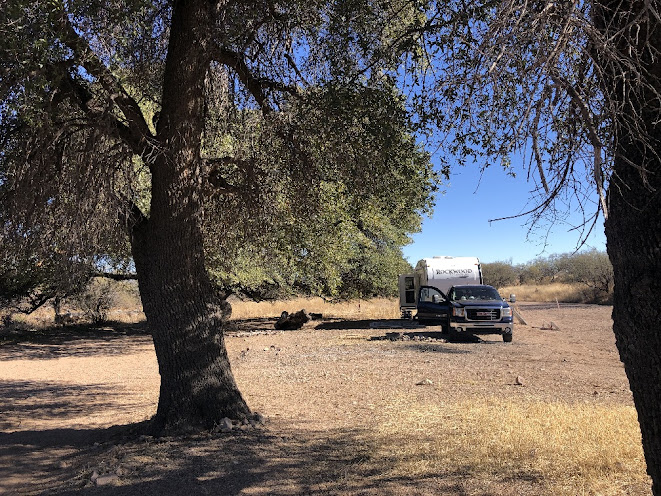 Fortunately, our camp spot is fairly far removed from the more popular spots where people tend to camp.  Good thing, as there was a dog field trial event going on, signs for a youth camp, lots of equestrian users, as well as others.  And of course, that means barking dogs, generators running at all hours, and traffic.  Other than a lot of ATV's on the weekend, it's pretty peaceful where we are.
Being fairly close to Tucson, we took advantage to collect some Amazon packages from their lockers at Circle K stations.  I do sometimes wonder how they decide what box to use, or is it just the closest one?  The bag for my bike came in this huge box. 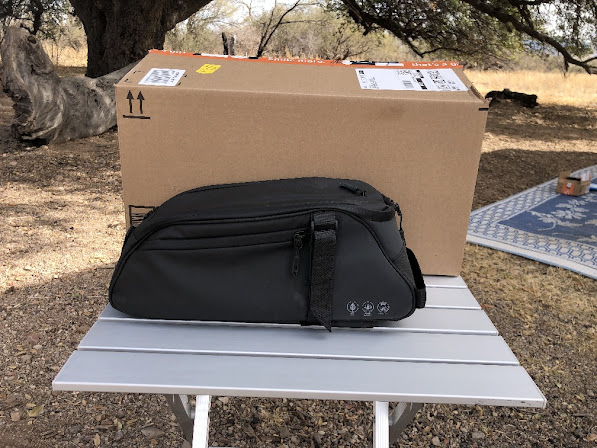 I thought I'd try an Apple Air Tag to see if it would help me track Hailey when she's out hunting ...
I think that box could have held about 1000 of them, not the single one I ordered! 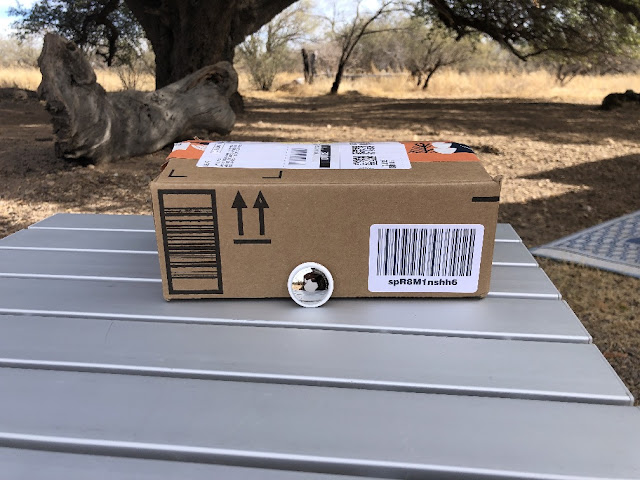 And finally, the small holder to attach the airtag
to her collar, along with her tags, and two bells ...  A bit more of a reasonable size package. 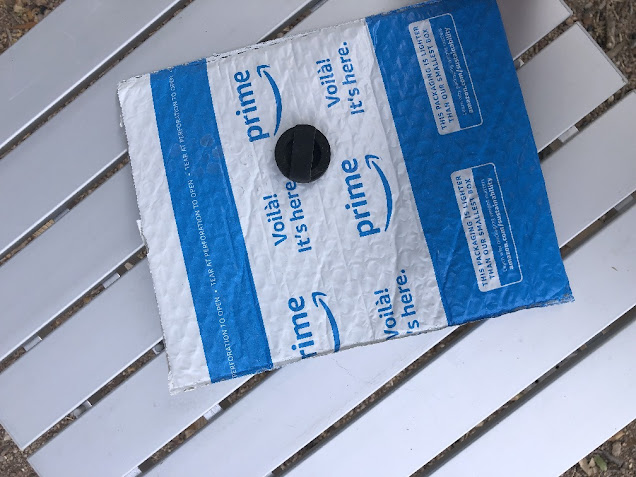 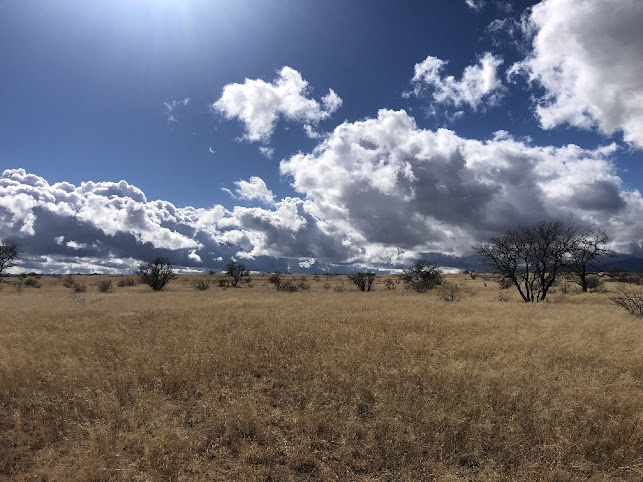 For some reason, I haven't seen a single lizard, till now.  Not sure if it is too cold for them, or if we've just been camping in the wrong locations?  This little guy I spotted laying upside down in a depression in the sand of the wash-showing his pale underside.  I assumed it was dead, but when I flipped it over with a stick, it was very much alive, though it did not run away.  Perhaps just getting thawed out from a long, cold sleep! 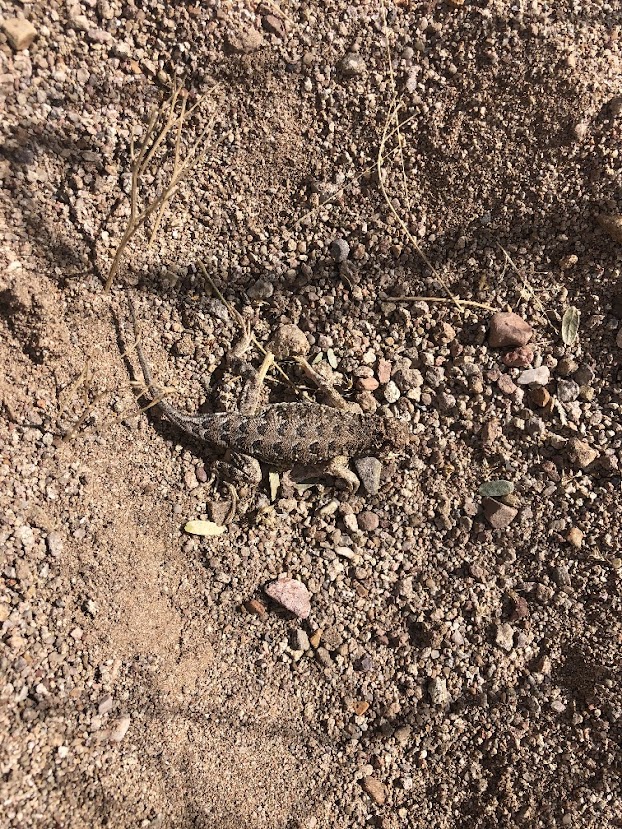 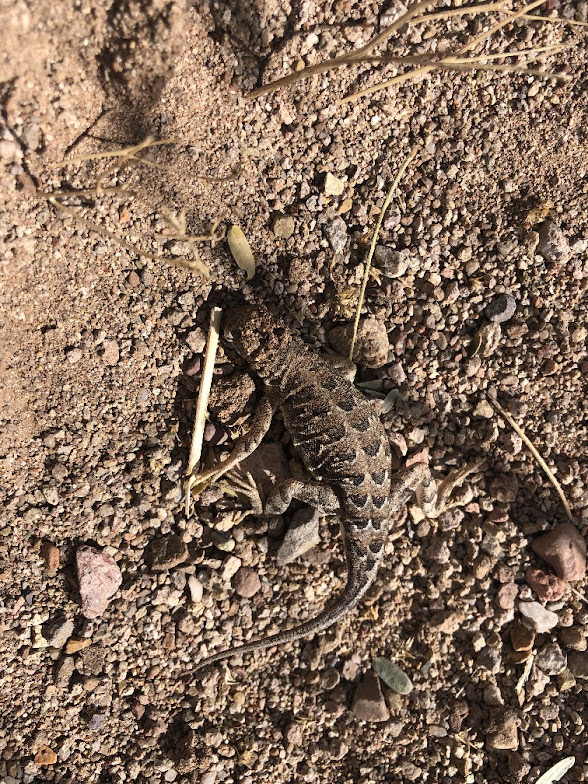 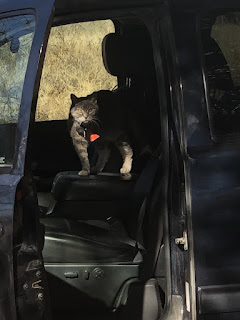 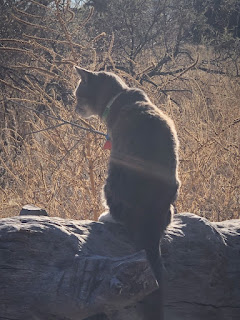 Everything in the desert has thorns!  This 'grass' looks soft and fuzzy from a distance, but all of those are thorns that will stick to your clothes! 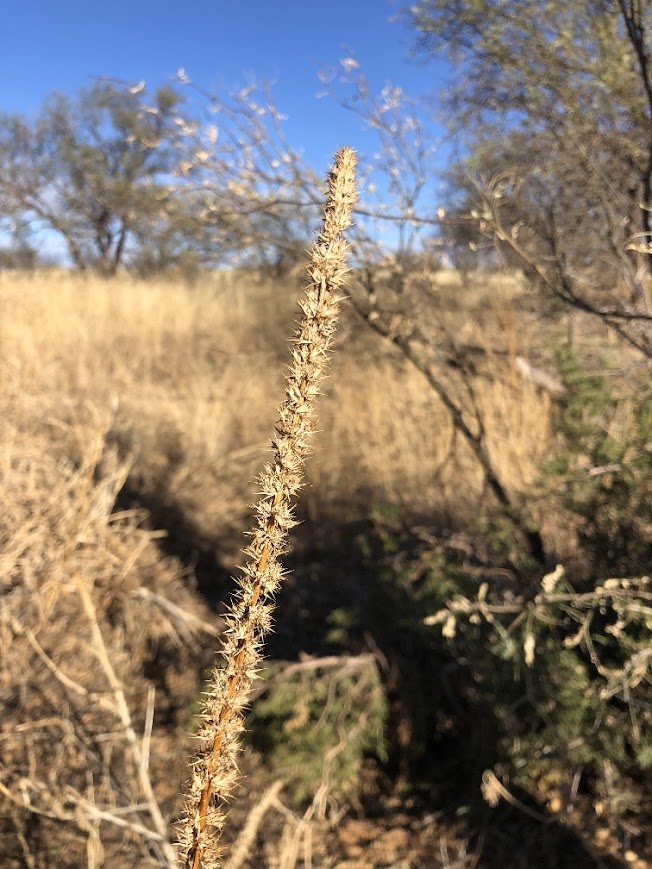 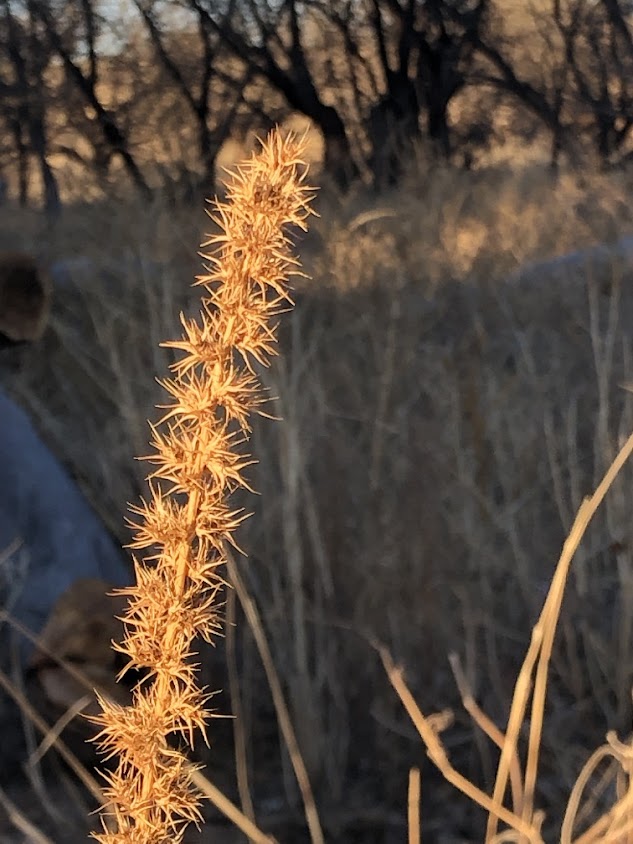 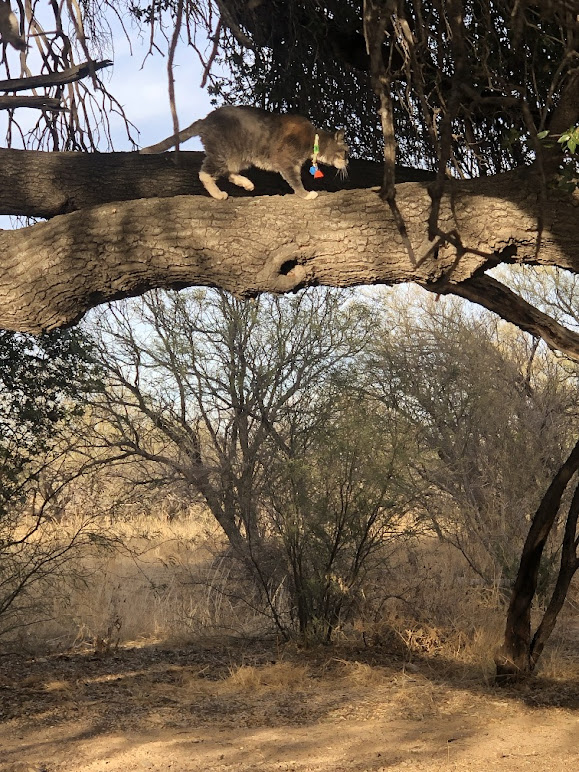 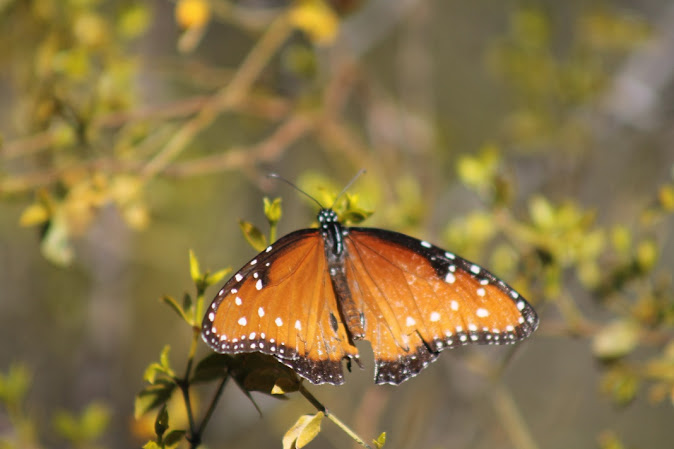 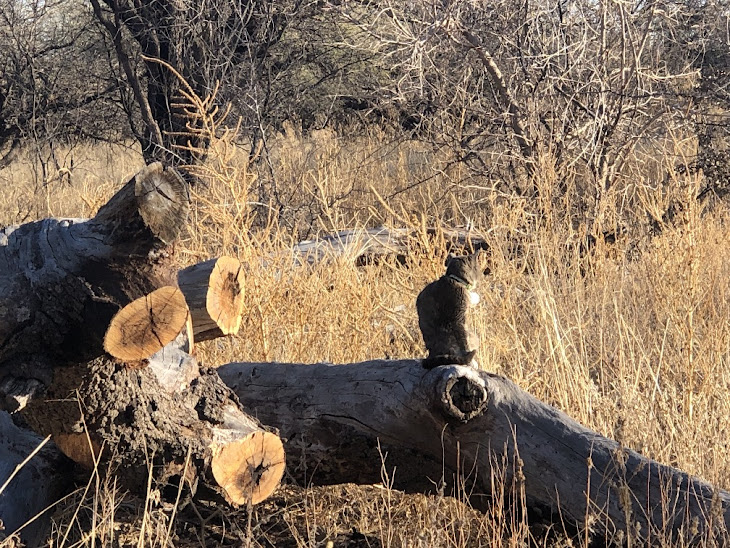 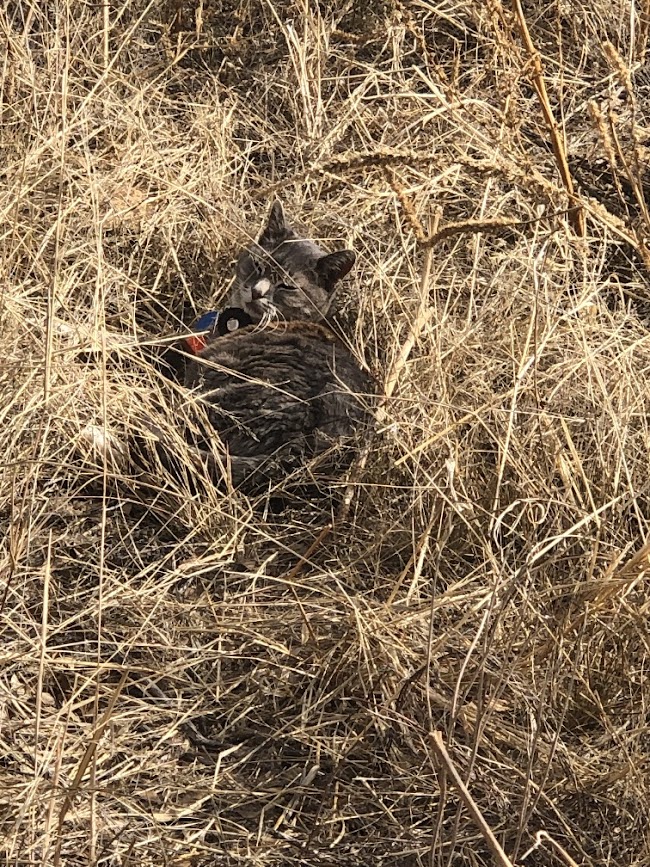 Found this section of exposed pipeline right on a steep, rough 4x4 trail.  It's marked as high pressure natural gas.  I e-mailed the company, but haven't gotten a response beyond an automated reply ... 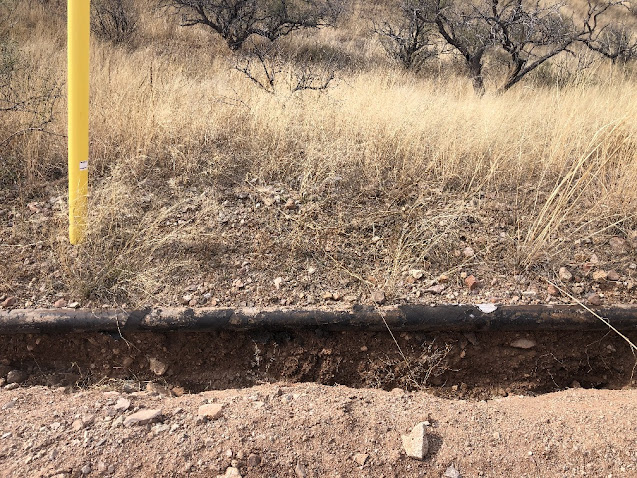 Lots of old windmills around in the south-west ranching country, but not many operational ones pumping water anymore, with solar taking over most of the active wells.  So this one, adorned with cell antennas, and a microwave dish was a bit of an anomoly!  It was fairly near a border patrol checkpoint on the highway, but I couldn't see any cameras on it. 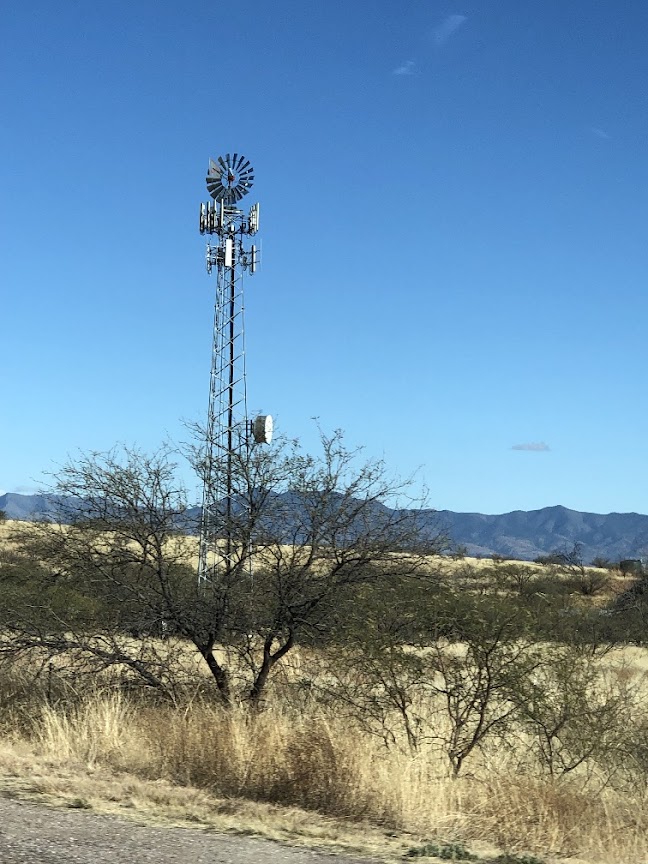