In the past, and for as long as I can remember, Blogger would send me an e-mail to advise that that comments had been received on the blog.  But lately, when the blog has been updated only sporadically, I had not been receiving any notice, and assumed that no one had commented!  Many comments do not require an answer, but when I recently reviewed the comments, I realized that there had been comments and questions that I was unfortunately ignoring.  Sorry about that. 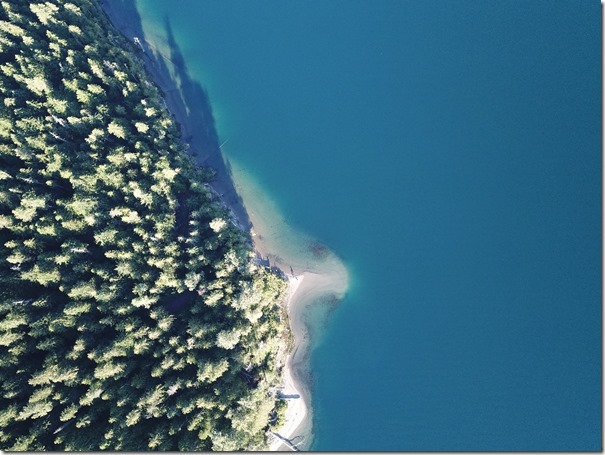 Now where were we? I think we had just left Trout lake, south of Revelstoke, BC.  We continued on south on Hwy 31.  There are one lane sections along the lake with steep drop-offs, but somehow it still qualifies for highway status!

Next stop on our way south was the Duncan Dam, finished in 1967 as a way to alleviate flooding and regulate the water flow into Kootenay Lake.  There are no hydro facilities related to this dam.  We stopped to have a look at it and take some photos. 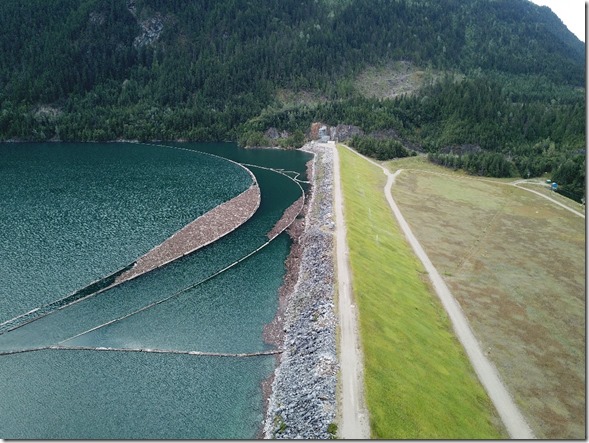 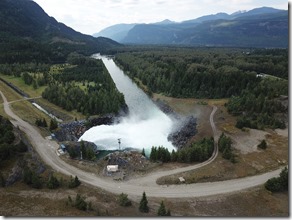 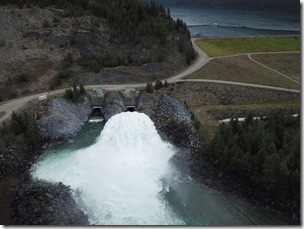 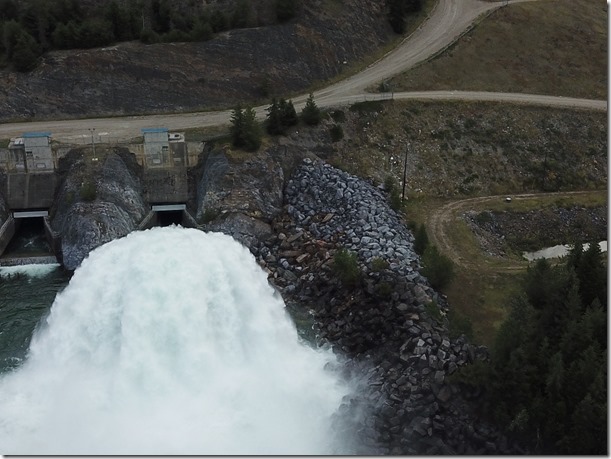 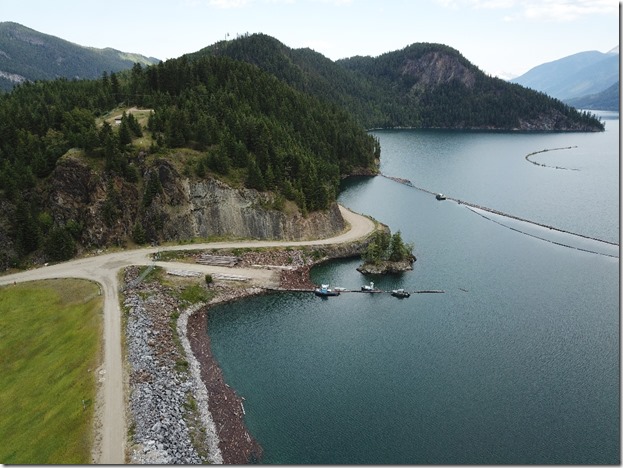 We continued on south along the west side of Kootenay Lake, and down into Kaslo.  For the last 3-4 days where we camped, there is no cell service at all, so arriving in town was a chance to get caught up a bit.  I think one message got through on Messenger before my phone decided that even with 3-4 bars of good service – there was NO internet!  Re-starting the phone (brand new iPhone X 256Gb) resulted in no service at all.  This was an all too familiar phenomenon, as it had happened only a month before and cost me a lot of time and effort (and temper tantrums) to get it working again.  Yes, I could have gone to libraries or other free wi-fi places (wi-fi and everything else still worked), but there are not a lot (none) of McDonalds, Starbucks, or Carl’s Jr in that whole area.  Although there are some Apple stores in BC, I knew from previous experience (!) that there was one Rogers outlet in Calgary that could likely fix it again, and an Apple store nearby.

With that in mind, a most direct route was plotted and the rest of the un-planned trip was aborted.  Down in Balfour, we boarded the ferry across Kootenay Lake – which is billed at the longest free ferry in the world – and crossed over to the east shore at Crawford Bay.  The weather was hot, so the open deck of the ferry provided a pleasant breeze.  Once on the far shore again, we drove directly to an isolated little swimming spot I had discovered on previous trips, and had a refreshing swim in the cool clear water along the rocky shoreline.  Hailey declined to participate! 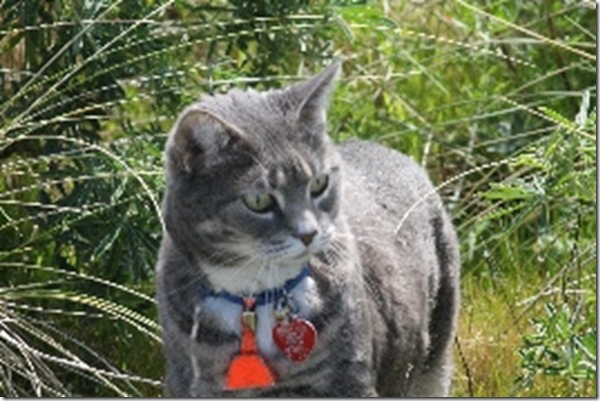 From there the intended route was directly across several high mountain ranges on questionable logging roads, coming out at Kimberley, BC.  I do not recommend it.  But committed, we pressed on, ever higher, dustier and rougher, but cooler as we gained elevation.  Most of the ascent was ‘poor’, as compared to ‘lousy’ going down the far side.  As luck would have it, one of my month-old rear tires exploded with a bang, about 50 miles from the nearest civilization or cell coverage, not that the latter would have helped with a dead phone!  Unfortunately, I have become an expert at tire changing.  I know where the jack and handles are hidden, how to put them all together, and how to liberate the spare!

(I took some photos on my phone, but they no longer exist, due to then – future circumstances)

Once down in civilization again, and spending a quick unannounced night with friends at the St Mary’s River B&B, we headed for the closest Fountain Tire location, confident that a month-old tire would be replaced at minimal cost.  It was not to be!  As explained to me, the cheap lousy tires they had originally given me did have a road-hazard warranty, but the ‘good’ tires they replaced them with (at no charge) did not have any road hazard!  So I ended up paying close to full price to replace a month old tire!

Back on good rubber, the priority shifted back to the useless phone.  Knowing from experience (!) that the Apple store required you to make an appointment, I tried in vain to phone them via Skype from a noisy fast food restaurant.  After wading through the insulting and condescending preambles, I finally got a real person online, though English was clearly not her first choice.  After a long song and dance, going through absolutely useless trivia (all I wanted was an appointment) I was transferred back to the insulting electronic limbo.  So I hung up, and headed for Calgary.

I walked into the Apple store like a rodeo bull in a china shop, and to make the story somewhat shorter, walked out with a brand new, working iPhoneX.  While most of my data transferred just fine, those award winning photos of the flat tire scenario will never be seen again ;-(

With no other plans, we just headed for home.  Only home for 12 hours, the next day found us headed up to camp with friends who were kicking back enjoying the weather at Abraham Lake, only a couple hours NW of home. 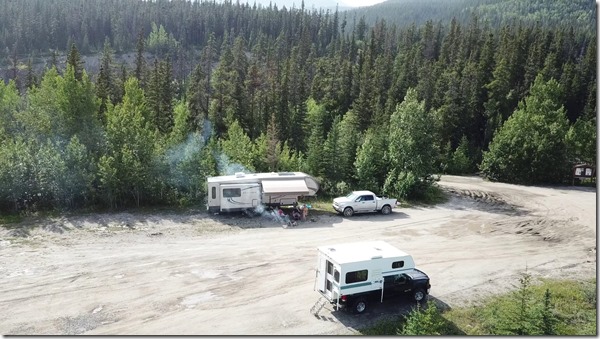 I think it was a long weekend (isn’t retirement great!), so the normally quiet spot was pretty busy with all manner of camper and day user.  Regardless, we got caught up on all the stories and emptied a few cans.

We went for a look at a nearby waterfall … 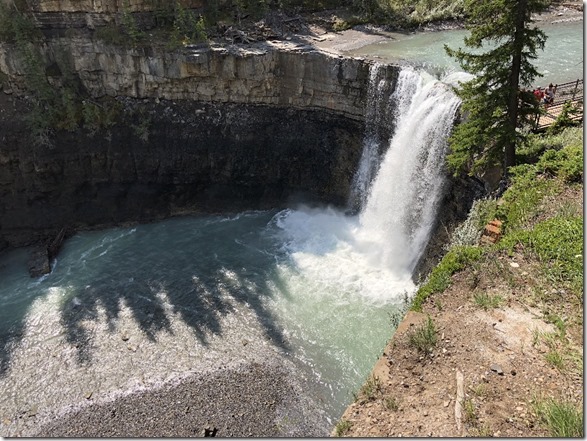 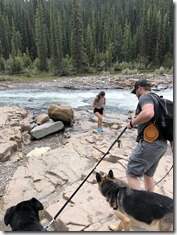 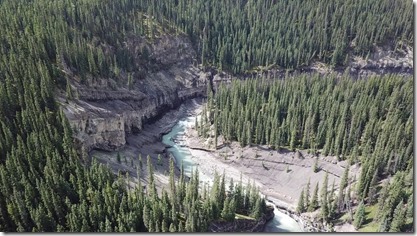 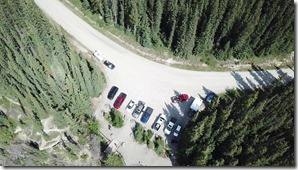 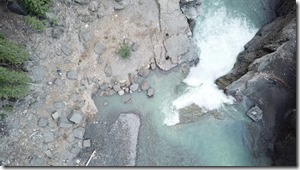 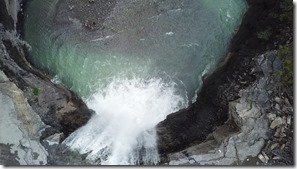 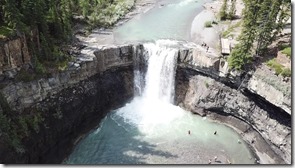 On the way home, not being in a hurry, I thought I would take advantage of the opportunity to check out the tours of the old coal mines at Nordegg.  I have worked several times in a mountaintop fire lookout overlooking the area, and had met one of the tour guides there, but never had the chance to check into it further. 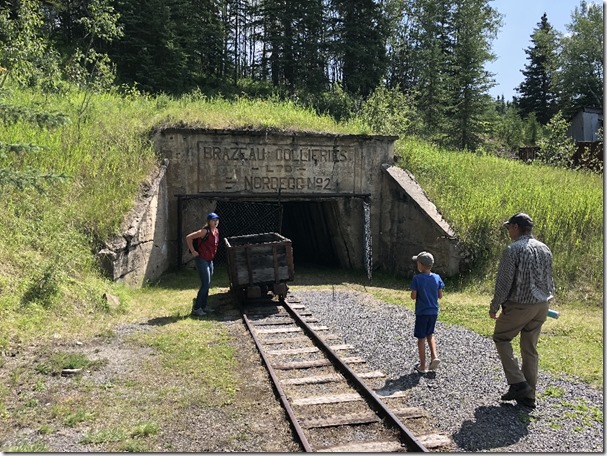 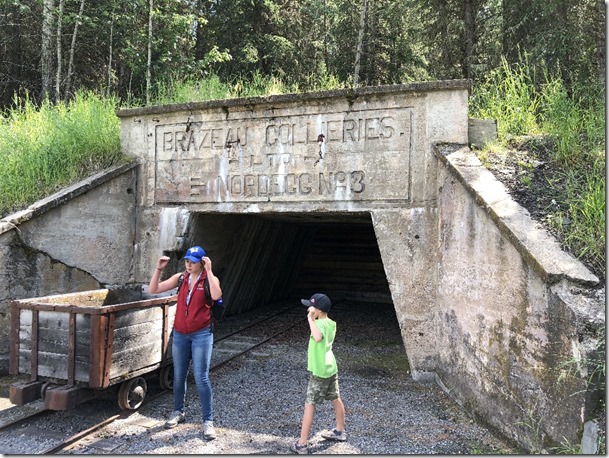 It was an interesting tour and well worth a couple hours walking through the old townsite and mine buildings. 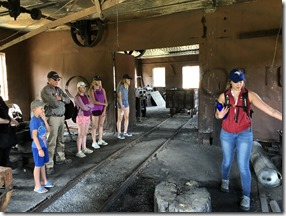 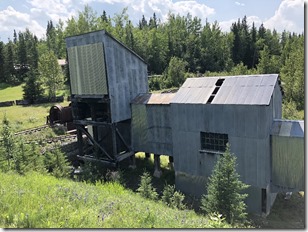 After that, we motored on home, and have been there ever since!

Catching up on a few things.  Cleaned and re-sealed the roofs of both campers, cleaned out the insides and pressure washed the mats, etc.  Starting to think about switching back to the 5th wheel for the upcoming winter.

The blog is officially up to date!