Back to Borrego! (Brown tsunami warning!)

We were rapidly becoming much too acquainted with most of the rodent population at Sawtooth Canyon.  They seemed to have identified an easy entry point, so every evening the ritual was to empty the traps at about bedtime.  Live captures would get relocated down the campground road, non-live captures not so much.  This was OK as long as it was only small mice, as they could only access a trap filled area under the sink, but when a kangaroo rat tried to move in, it was much too noisy and potentially destructive.  Plus, I did not have any traps large enough to handle such an intruder.

It was time to move, if just to escape the invaders!  First stops along the way were to stock up on varmint control equipment.  We got larger traps, spray deterrents, lighted ropes, expanding foam sealant, and anything else we could think of to stop the assault.

I was still getting over the remnants of my first cold in 5 years, so instead of stopping to visit friends in Desert Hot Springs and area, we decided that some isolated desert time was in order.  So, on to Borrego Springs it was.  Besides, Hailey was a little under the weather as well, perhaps as a result of the non-stop mouse invasions? 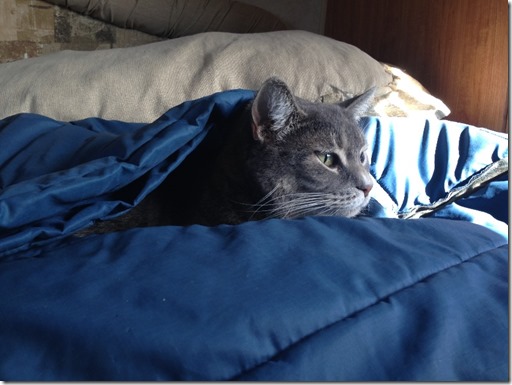 As all Borrego Rv’ers seem to know, the Arco station at the corner of 78 and S22 is a great place to get fuel, propane, and of course dump and fill.  It has always been free dumping there, with the exception of an abandoned $8. charge a few years ago.  So I was somewhat surprised and disappointed to get there and find new automated, solar powered, credit card readers with a $10 price tag ;-(.  I did need to dump, so reluctantly scanned my card and got absolutely NO reaction from the machine, and the dump was still securely locked.  Made the long walk back to the store and stood in a long ‘slushie’ line for 5 minutes before explaining my predicament.  I was told that this was a brand new system that had only just been installed the previous day!  The nice clerk then charged me $5. (!), and gave me the ‘secret code’ that would allow me to dump.  Entering the code worked fine, the pit opened and I was soon able to yank the black handle and let fly.  Well, good thing I have quick reactions as there was an almost instant ‘brown tsunami’ that came bubbling out of the hole threatening to overwhelm my footwear!  Well, I slammed the valve shut again, and by carefully limiting the flow, was able to get everything to go down the drain.  That is, of course, till I turned around to see everything I had eaten and flushed for the last 3 weeks bubbling out of an adjacent dump site and flowing across the paved parking lot towards the gas pumps!  Nice. Very nice!

After informing management of my exciting close call, they advised that it must be plugged!  NO kidding?  I also advised them that their new solar panels wouldn’t last a week where they were as they would be torn off by any RV trying to get close to the dump site.  I think this proves my theory.  I like FREE things.  Whenever I pay is when things go very wrong.  I know I should have taken some photos, but – you know how it is  …?

Anyway, now well behind schedule we continued on towards Borrego Springs.  I knew that my usual spot down Rock house Rd would be available, but with the several km of dusty washboard, and my new reliance on a strong AT&T signal in mind we searched out a new spot the Bayfield Bunch checked out last year, and found it much closer to the pavement, and with a really fast signal available. 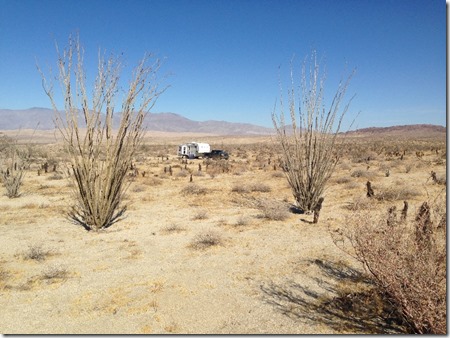 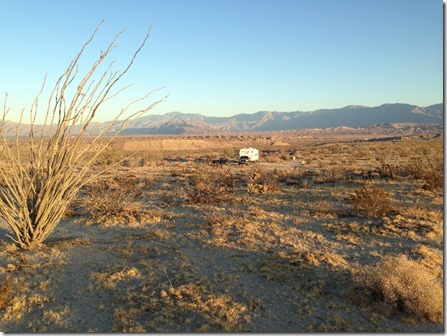 Didn’t bother putting out the slides the first night after arriving late, but was pleased to see no new invaders targeting us.  The next day the slides were out and still no new visitors in spite of lots of signs of wildlife outside.  I sort of wanted to test each of my deterrents individually, so I could tell if they actually worked in real life situations.  But after a couple of nights of no trespassers, I couldn’t resist going crazy with a new can of high expansion foam!  I did find a spot that may have been the mouse freeway on-ramp, so tried to make it as inhospitable as possible.  Now, a week later, nothing has gotten inside, so the new traps, two types of spray deterrent, and the rope lights have gone unused.

Cheapest diesel around appears to be at the Red Earth Casino, so we toured back out there one day to top off the tanks.  While there, we were inundated with some sort of small flies that would accumulate on your windshield or hood any time you stopped. Even though they had just arrived, most seemed half dead already.  I was glad to get back to Borrego and away from this pest.  I suspect they were hatching on the Salton Sea? 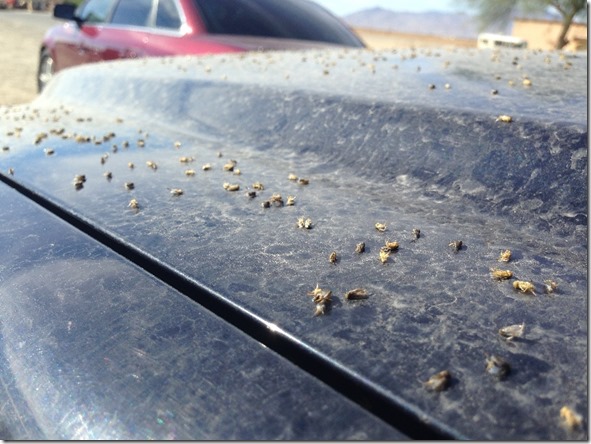 Even though the cell signal was very good where I was camped, I was also sharing the tower with the thousands of ATV’ers and campers who descended on Ocotillo Wells area for the Thanksgiving weekend.  So during the day during this time, even my slow satellite internet was a faster option.  With the crowds now long gone, my speed is great day and night!

There is wildlife in the area, including this rather large fellow.  While most of the tiny lizards are very fast movers, this guy was in slow motion. 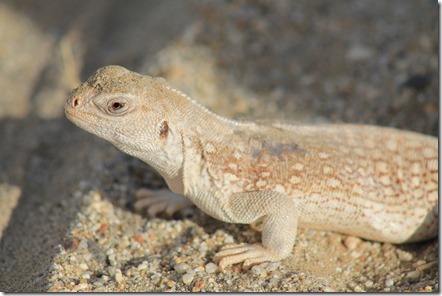 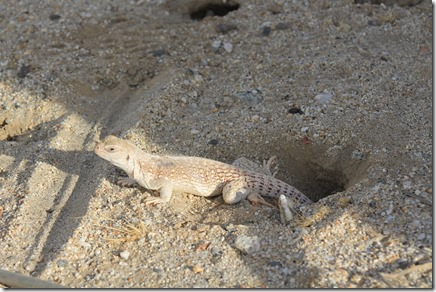 Because of all the cholla cactus in the area, Hailey has been restrained by her leash here, and when she spotted this slow mover I had to hold her back or she would have had him for sure.  I like to give the local wildlife a sporting chance at least. 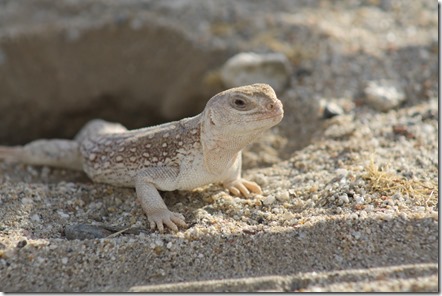 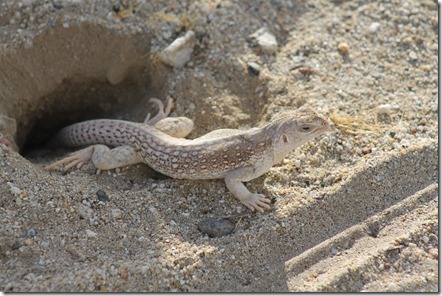 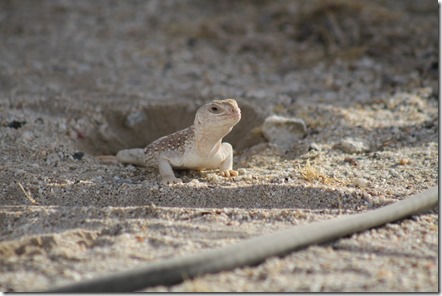 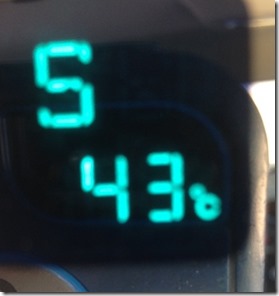 It was pretty much too hot to hike for a few days there, but off in the distance I could see some sort of installation on a ridge top.  Eventually, I was able to drive/hike into the area and found this USGS sensor.  Not sure of it’s purpose, but I suspect it is seismic in nature. 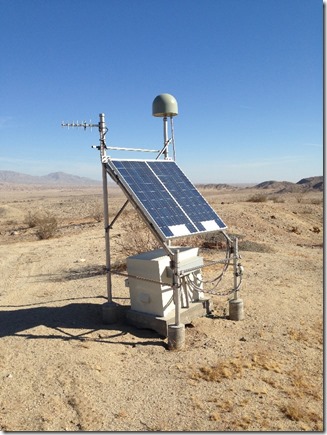 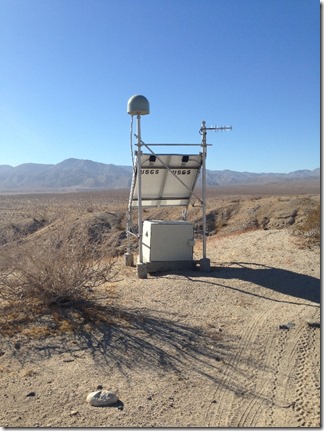 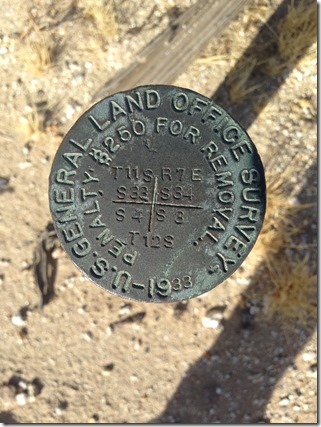 After the heat moderated, the winds came up!  The rig had been rocking all night, but a strong broadside gust as I was making morning coffee blew us right off the blocks!  That has never happened before!  Some water jugs provided some temporary support. 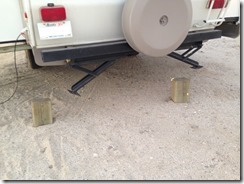 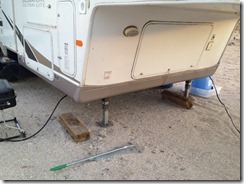 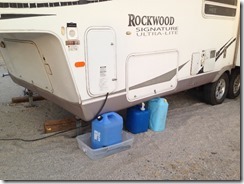 In hindsight, I often place a single 4x4 post under the hitch to support it, so this starts to act like a fulcrum when the wind blows, and lets the rig rotate on its wheels.  After getting things back on the blocks, I hooked up the truck as a solid anchor till the winds died down.

With the hottest days behind us, I didn’t have to worry about leaving Hailey in the trailer during the day, so a day trip to San Diego was in order.  She could have come along, but I know she doesn’t enjoy the miles of tight curves and switchbacks, especially returning in the dark.  We learned that the hard way a couple years ago. 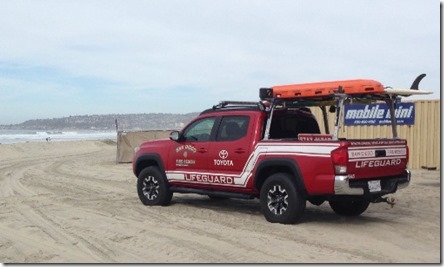 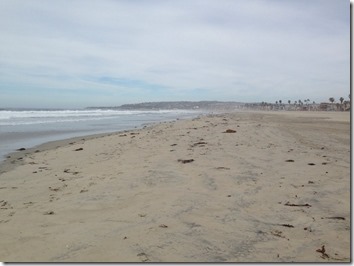 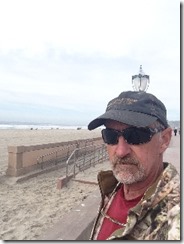 Frys Electronics is always the first stop.  After that, it was a walk on the beach, and touring around the city a bit. 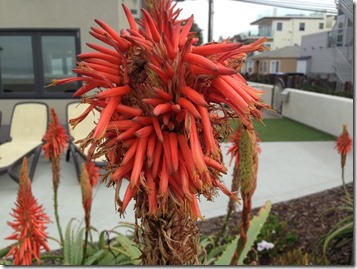 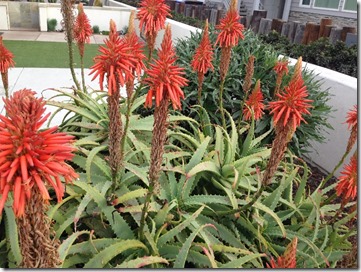 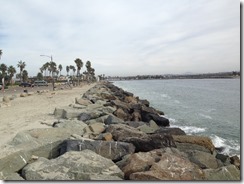 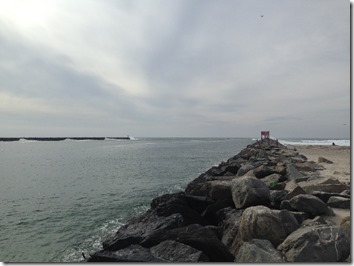 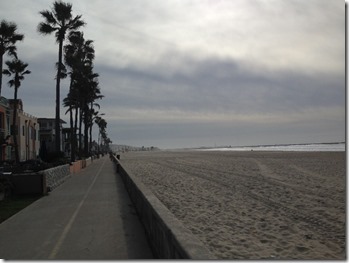 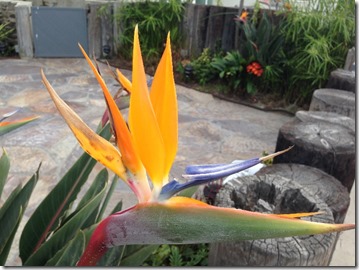 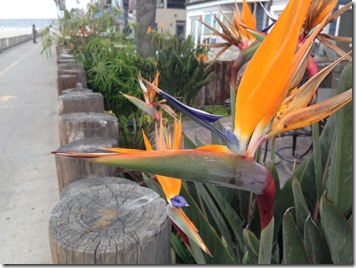 Sunrise, back in camp in Borrego. 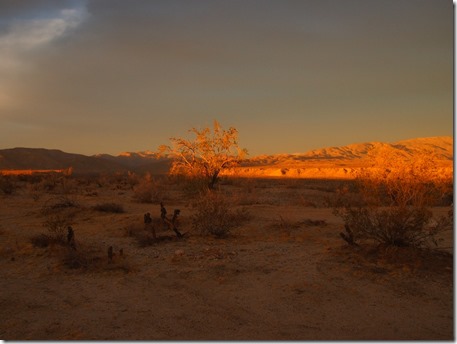 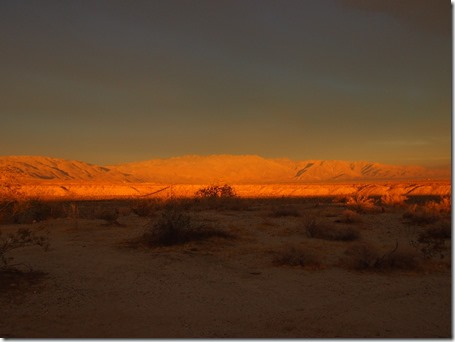 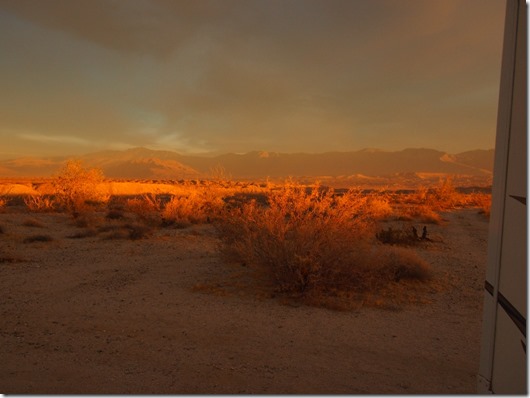