When we arrived in Prince Rupert on the northern BC coast, the weather was unusually sunny and nice, but reality soon returned, so it was time to make a U-turn and head back down the Yellowhead highway. 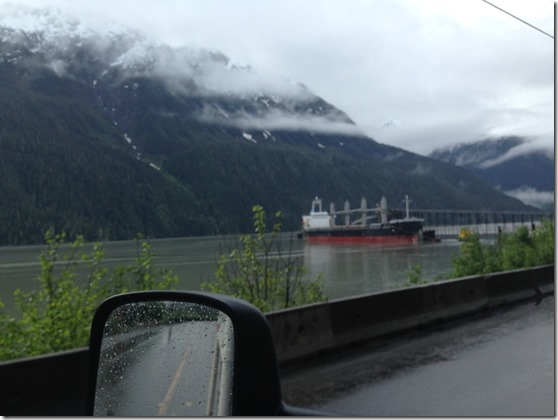 Passing through Terrace, after a bite and a fill up, the junction of the Stewart-Cassiar highway beckoned.  Well, why not?  We’re already this far out west and north.  What’s a few thousand more kilometres?  I hadn’t been on this road since 2009, and Hailey had never been on it, so off we went, in the mostly pouring rain.  A convenient little Forest service rec site at Bonus Lake provided refuge for the evening and a bit of a view of the lake, but no wildlife.  Further north, at Meziadin Lake, we drive through the very nice park campground, which has water, no rv dump, and wi-fi for a fee. 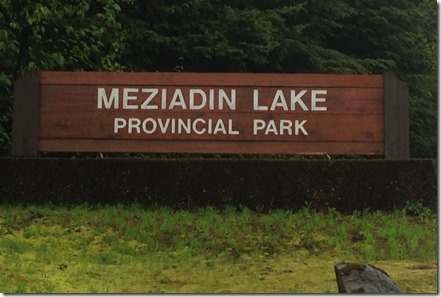 Continuing on north, another junction beckoned.  Neither of us have been to Stewart BC, or Hyder Alaska, and what better opportunity!

While it was still mostly overcast, it cleared enough for a good view of the glacier winding its way down to the valley bottom. 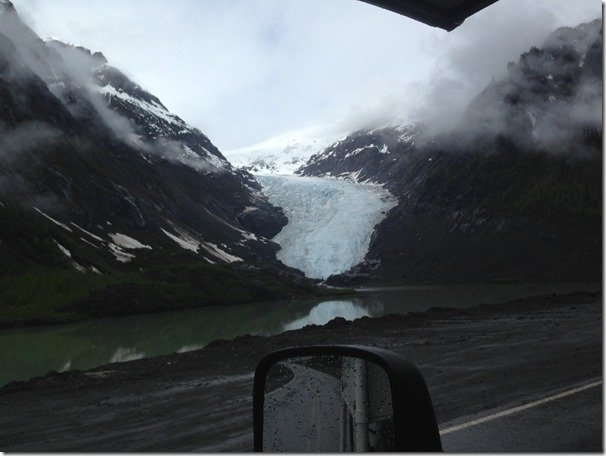 Stewart provided some cell service to get updated as we headed for Alaska.  Hyder, that is!  I hadn’t realized that Stewart/Hyder had an ocean port, but sure enough there was a freighter docked there.  I’m not quite sure which country the ship is in, because the border does a weird zig zag about there! 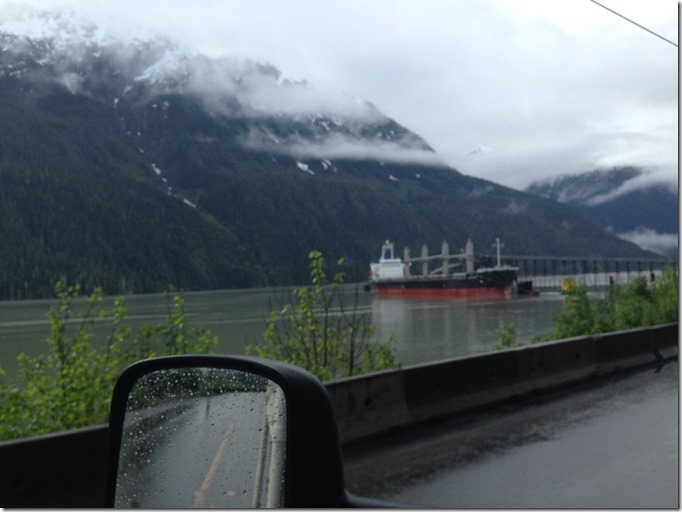 There is no US customs at this entry point, so we just drove on in, for Hailey’s first time in Alaska.  Just following the road brought us to the famous bear viewing area. 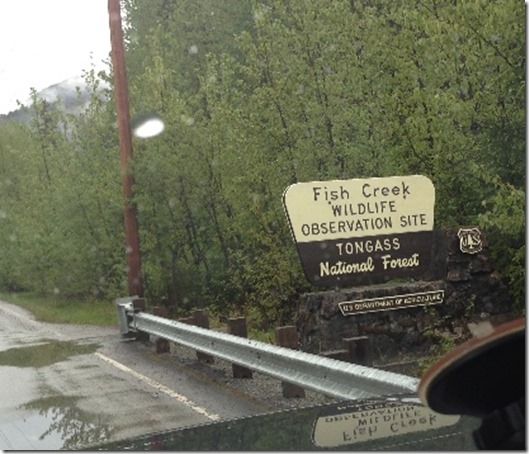 It’s not salmon season, therefore not bear season, but the walkways had to be checked out anyway, in spite of some continuing showers.

Must be quite the place when the bears are active.  The outhouses are only about 150 feet across the paved parking area from the small cabin which must serve as an interpretive center, but the signs strongly suggest using the fenced walkways only!  And absolutely no cooking or eating in the parking lot! 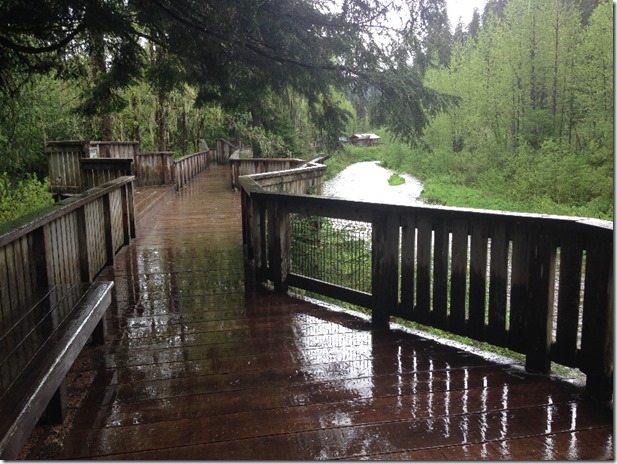 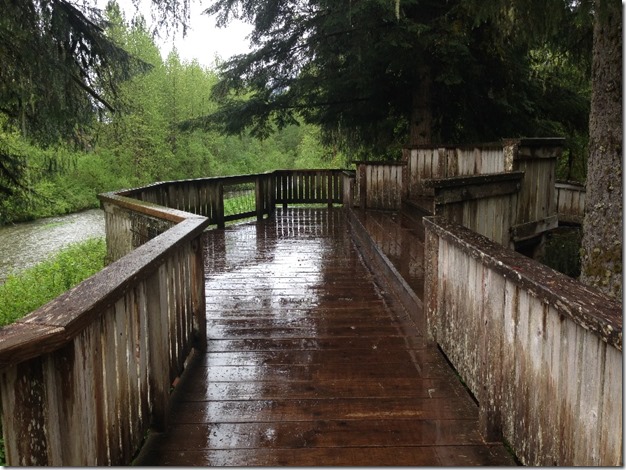 Back near the border there is a convenient island launch area well out in the middle of the river here, so we drove out for a quick look around. 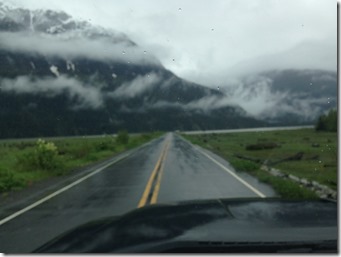 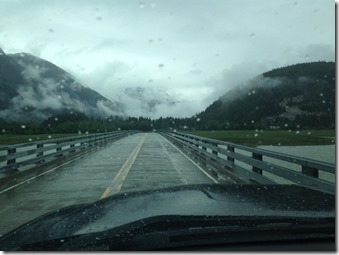 Then, back out through Canada Customs! 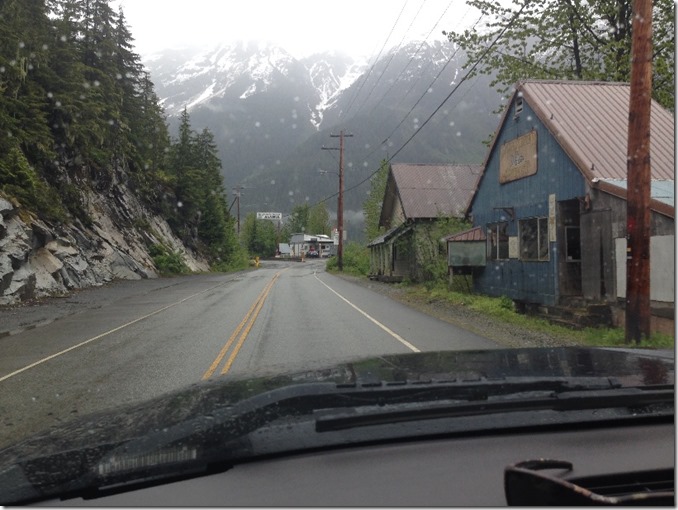 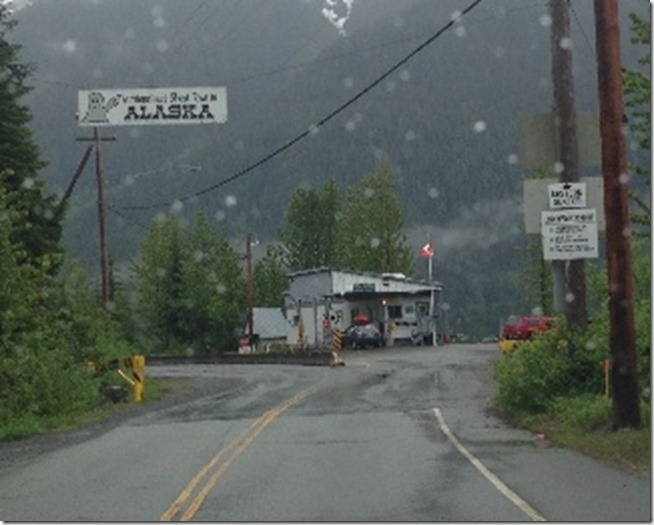 In spite of the fact that all the American bears were off duty out in Hyder, the Canadian bears further east were out in spite of the rain, wolfing down the dandelions and other lush roadside greenery. 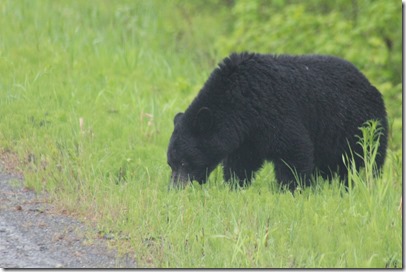 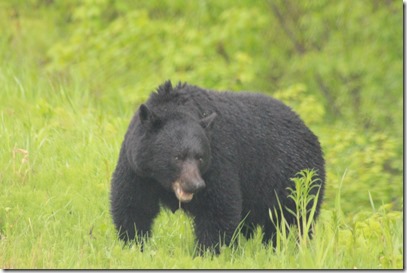 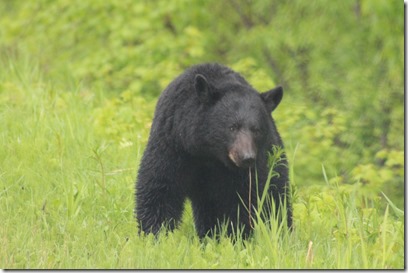 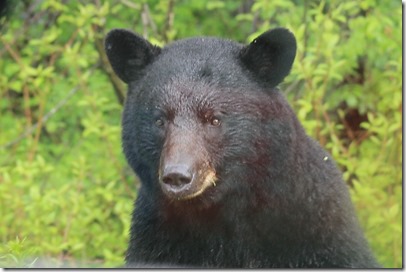 I watched this sow for a while, before she told me her cubs were just back of her in the trees! 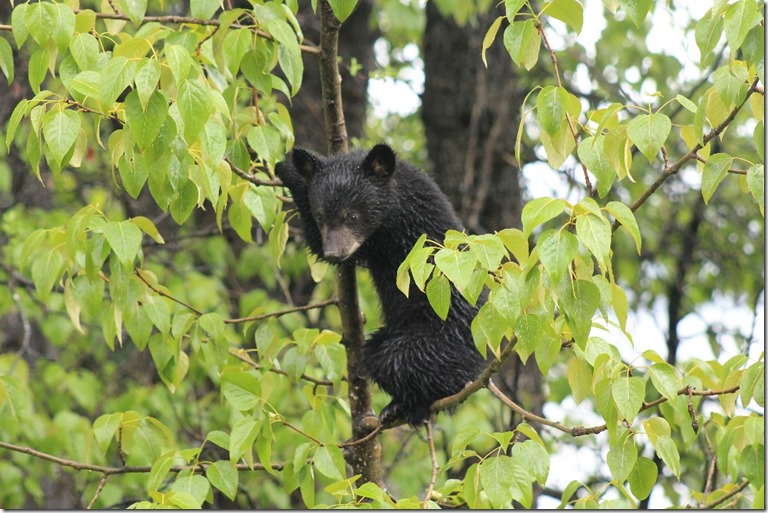 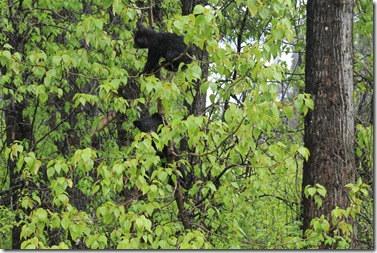 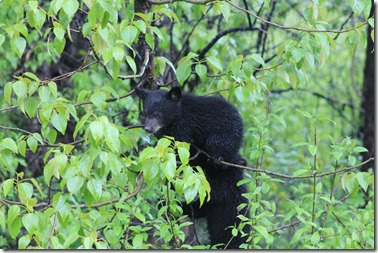 One thing I love about this whole area of western and northern BC is that there are many, many rest areas every few miles, all with outhouses and garbage bins.  And in between there are many more roadside pulloffs that have trash cans as well.  Sure a nice change from some of the areas in the southern US where finding a legal place to dispose of your garbage can be quite a challenge.

Another great thing about this time of year up here, is that there are NO Bugs yet.  Well, there are a few that sacrifice themselves on the bumper and windshield, but none that want to bite you!  Yet!

Continuing northward, the rains ceased around Dease lake, and we spent the night near Boya Lake provincial park.

Next morning, another first for Hailey as we entered the Yukon for her first time. 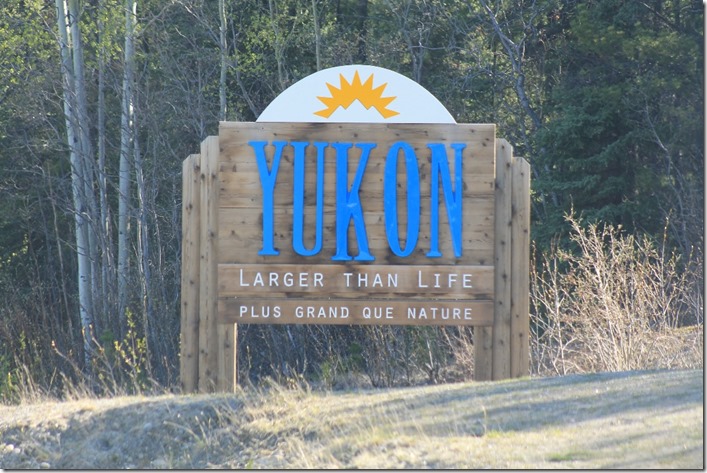 There was a little bit of cell service at the junction of the Stewart-Cassiar, probably coming from Watson Lake, further to the east, but it wasn’t till Teslin till the service was good.  Before that, the highway ducks back down south into BC again for a short ways. 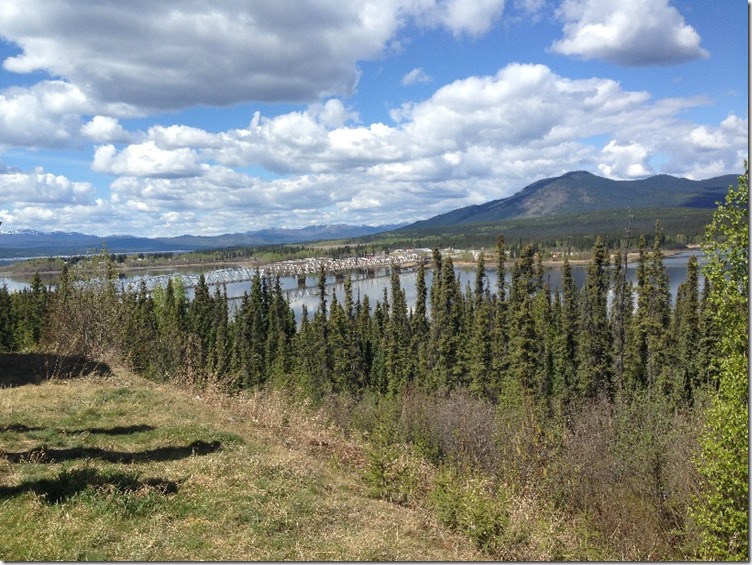 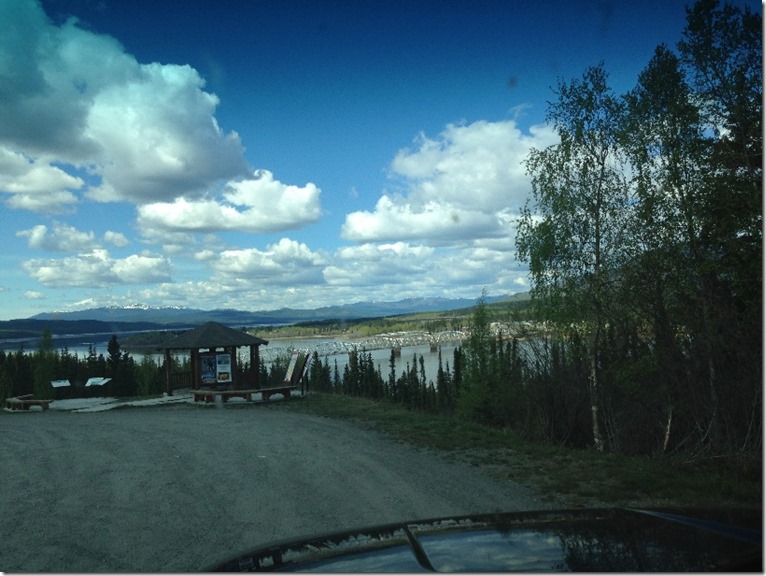 I guess it’s a cost saving measure, but I see the RCMP even have some of their ‘cardboard’ detachment cars out on the roadsides to keep an eye on traffic! 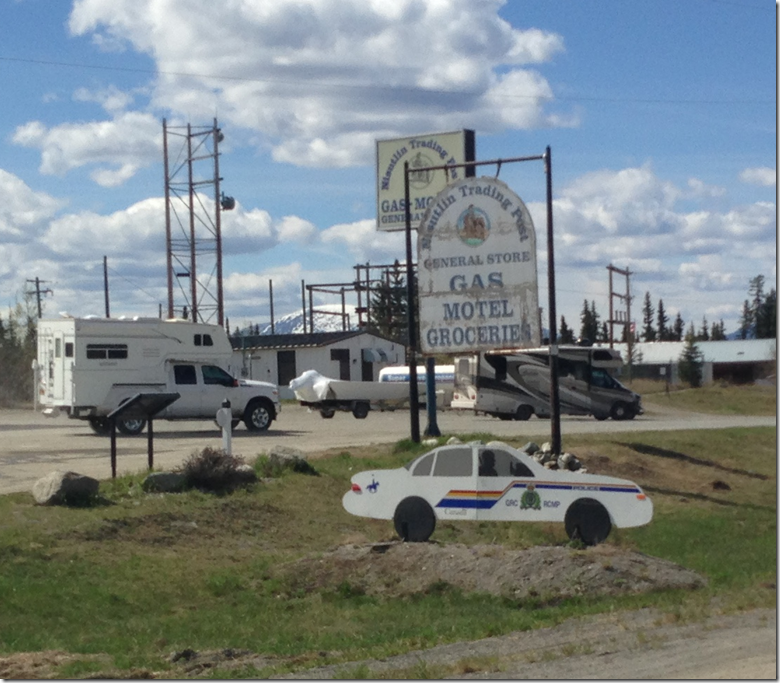 Unlike most jurisdictions these days, the policy for fueling is a bit different up north!  Do not pre-pay! 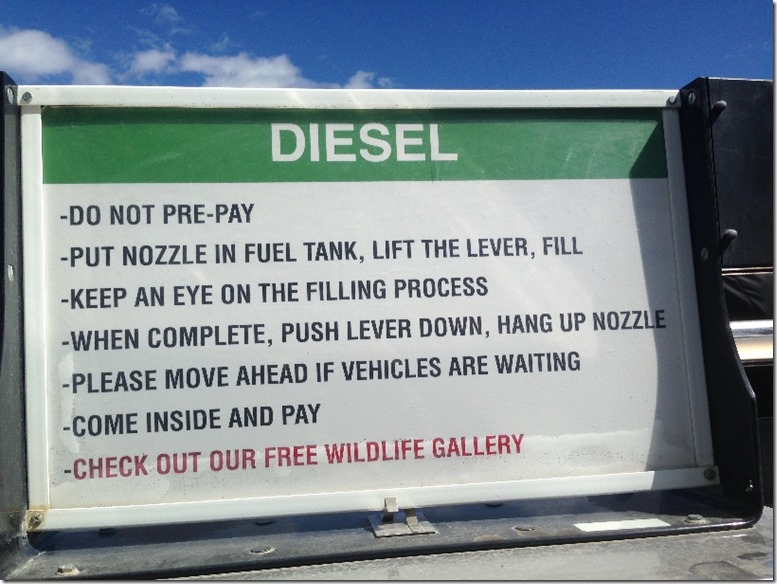 Carrying on to the territorial capitol of Whitehorse, we visited with some friends in the area as well as my brother and his wife who happened to be in the area.  North of town, I managed to find the nice place I had discovered during a previous visit.  It was even more scenic than I remembered.  There was even a local photographer out there to take what looked like ‘engagement photos’ in the evening light. 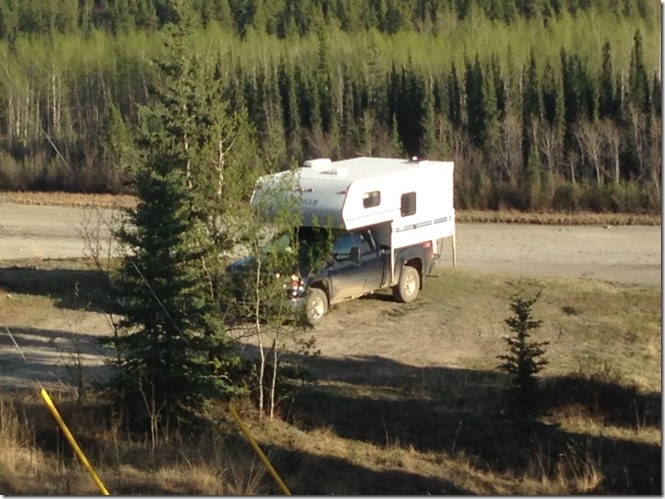 Sorry, if you don’t have a truck or perhaps a smaller class B or C, this spot is not for you. Whitehorse.  Hmm, where to next?