After a couple of days of soaking in the hot springs near Bridgeport, California, there was a change in the weather.  The road had been partially washed out since I was there in the fall making it a rough trip.  With fresh rain falling, I did not want to risk further problems, so we pulled up stakes and headed out.  For a change we headed back into Nevada right away and continued on that side of the line all the way north of Reno. 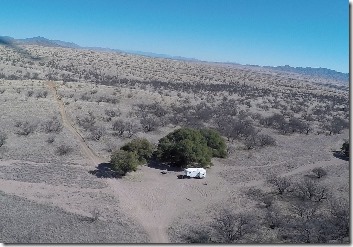 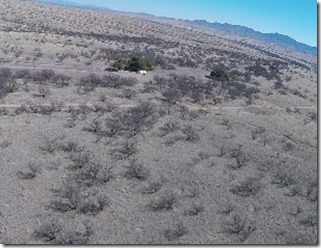 It was pouring rain as we pulled into Susanville, so there was no real incentive to stick around and try to enjoy the area.  The route from here to the coast follows a high winding mountain route, so the advent of trees again is a nice change after months in the desert.  Dropping down into the central valley at Red Bluff we were soon up in the high country again in the Shasta Trinity forest – the same route we came across back in November.  I recalled a high remote pull-off at the summit that was full of drug interdiction vehicles last time, and used that as a nice spot to overnight. 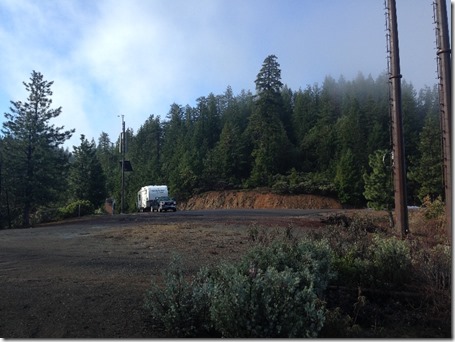 At least the rain had mostly ended by morning and the sun was doing it’s best to shine through.

Because of all the rain and snow in northern California of late, most of the creeks and rivers were running high, and there were numerous small mud slides along the road.

We made it back to the coast near Fortuna, and spent a couple of days listening to the surf pound at night before the weather deteriorated once again.

A few paragliders were taking advantage of the ocean breezes to do some ridge soaring above the south spit. 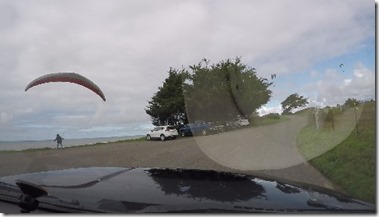 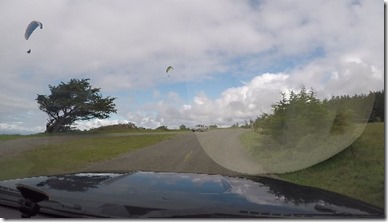 Must have been crab season as quite  few boats were out checking traps, and trying to safely cross the bar back into the safe waters inside. 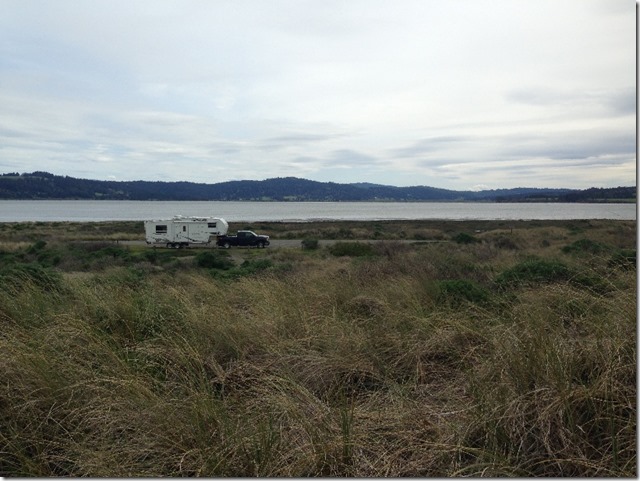 The weather was not that nice and the forecast for the next week was even worse, so the original plan to slowly work our way up the coast was out, and a speedier more direct line was in order.

As is common on the coast, sections of the road are continuously slumping, and falling into the ocean.  So the repairs and rebuilding is also a continuous process.  This trip was no exception. 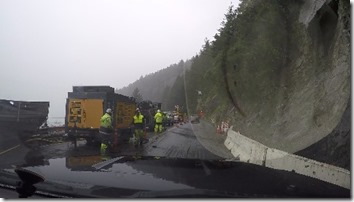 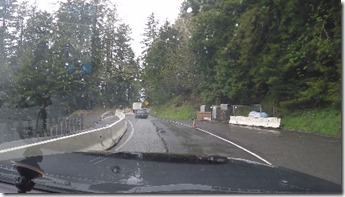 We scooted up the coast with some fairly long days, often passing by good spots where we had often overnighted in the past. 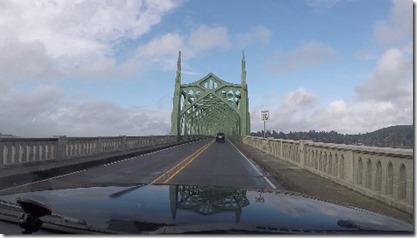 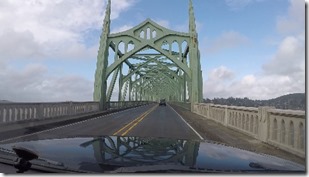 There are some impressive bridges along the coast in Oregon, including those at North Bend, Reedsport, Waldport and Newport.

From there we took an inland route through Portland, and eastward up the Columbia River. 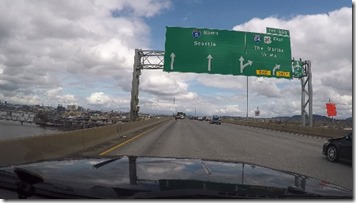 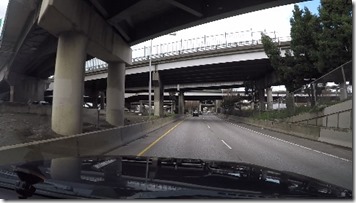 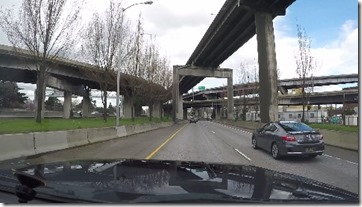 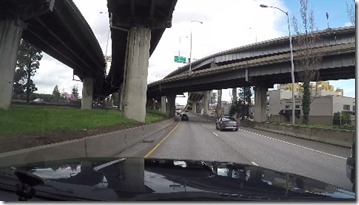 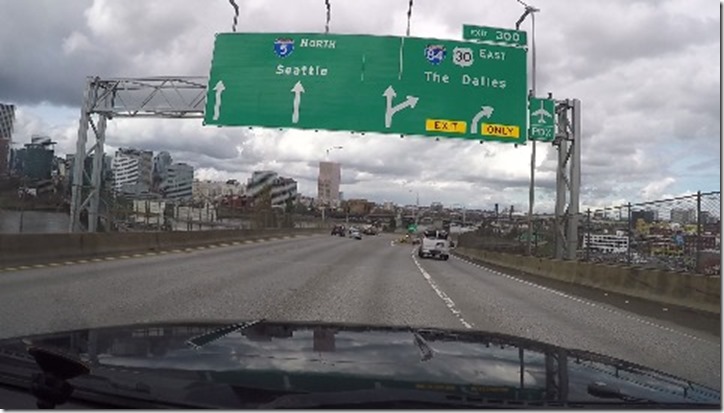 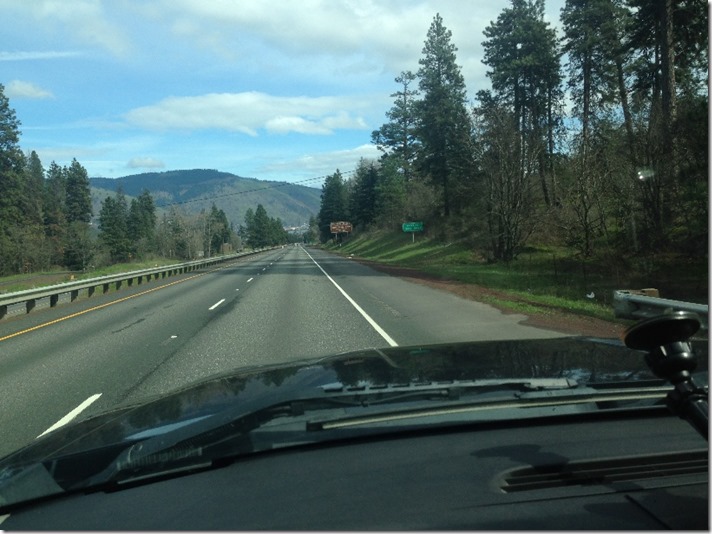 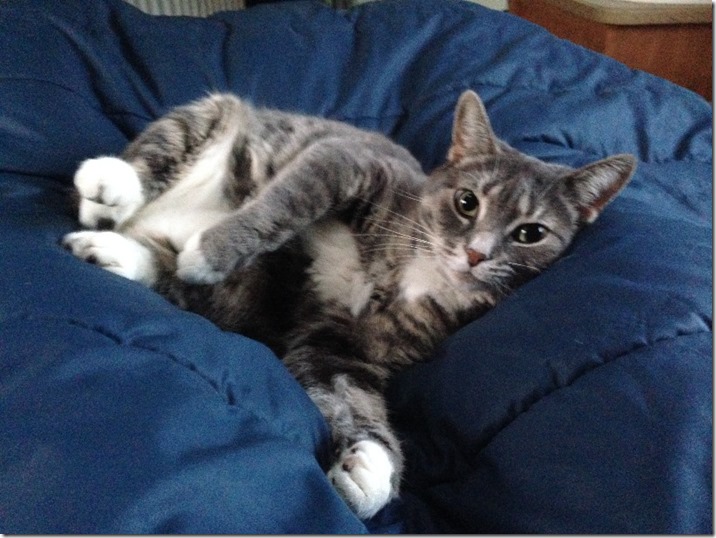 We stopped for the night at a usual place next to the John Day dam on the Columbia river.  The spillways were really going full force, and the current was strong below the dam where there are usually large back eddies.

Another long day on the road found us making it across the border with no hassles, and parking between the snowbanks at friend’s St Marys River B&B near Cranbrook, B.C.

One more day on the road found us back at home after over 5 months away!  It was a relief to see that there was virtually no snow left in the yard, and the high security gate (!) had protected everything inside. 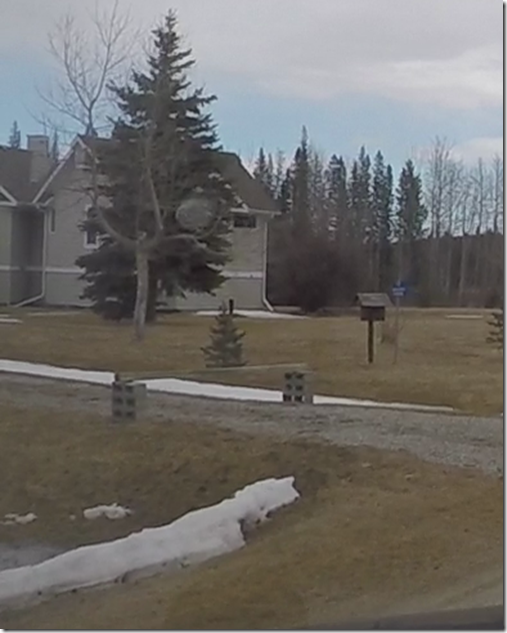 It wasn’t long before the heat was turned back up, the water turned back on and everything was just as we left it.  Hailey spent some time outside, but seemed glad to be home with many more rooms and a basement to prowl, and many sinks to drink from!  With lots of coyotes around, she has not been keen to go outside since then.

A quick calculation showed that we had traveled a grand total of 18,399km or 11,211 miles over the winter.

I decided not to go back to my recent summer job with Alberta Forestry, so hope to spend much of my time on the road this summer as well.  But don’t expect much from the blog till we do get back on the road.