Unlimited Data! New Mexico and back.

Doesn’t take long for a blog to get out of date!  You don’t blog for a couple of weeks, and before you know it, it’s old news!

Looks like we left off in Harshaw, the ghost town out in the woods not too far from Patagonia, Az.  That was where I was when I got the call from the Mastercard fraud dept.  You always know it’s good news when they call

.  They told me that my card had been compromised and that they were canceling it and would send me out a new one.  This is not good news as I have a number of accounts that directly bill my credit card.  And I am not anywhere near home so getting a new card is not quick or convenient.  So I asked them what exactly had been charged to my card?  They told me it was a $0.97 charge that had been refunded!  I know that can be a crooks way of testing a card, but eventually managed to convince MC not to cancel the card unless something more devastating and devious turned up.  Keeping a close eye on it, but so far no issues and my bills are getting paid.

After chatting with the Bayfield Bunch, live and in person (!), and getting updated information on Las Cienegas National Conservation Area, it seemed like a good plan to head on over there as it was only a short drive away from where we were.  They had already departed the morning we arrived, but we found us a nice spot under some huge old trees with plenty of shade, and hours of climbing fun for Hailey. 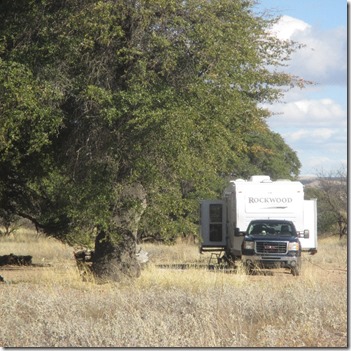 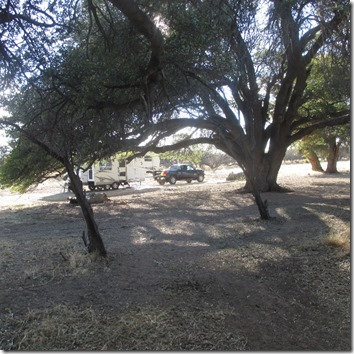 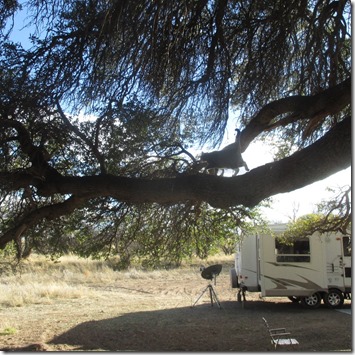 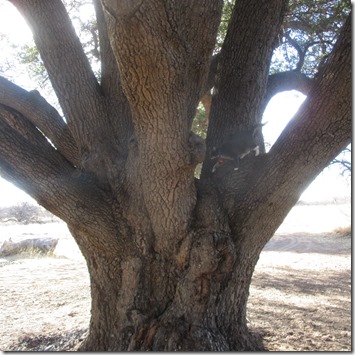 Our spot was just a bit to the north of the old ranch headquarters area, but we never did find the time to go over there and have a look.  I took a drive one day, hoping to see some of those elusive antelope that Al had photographed right out his RV window.  But alas, even after miles of driving and hours of glassing, the only thing seen was a half dozen white-tailed deer near the HQ.  But our drive took us way north of the airstrip and back on a ‘secondary’ trail, where if we opened one gate, we opened at least 20 to get back.  We did come across the prairie dog colony, but to me they did not look like the endangered black-tail variety. 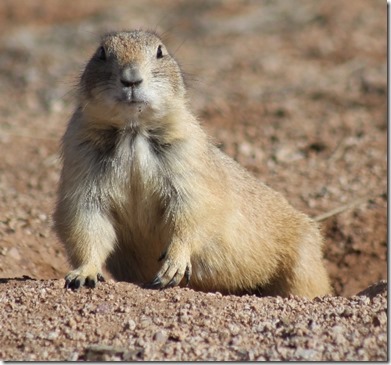 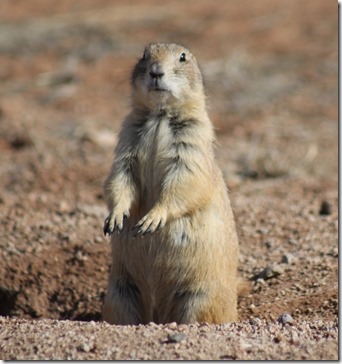 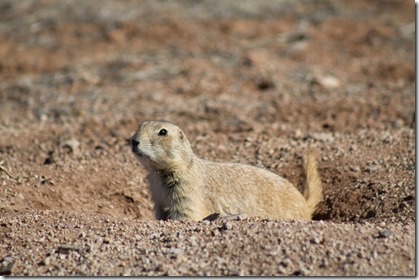 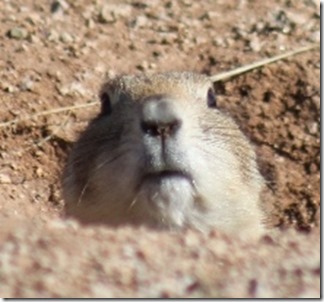 When the main road finally appeared again, it was worth the trip to check out the southern access to the Conservation area. When I visited the last time in 2013, that southern portion of the road was very rough for any type of camper, but it is now beautifully smooth and well maintained.  The memories of that road had discouraged me from returning – till this year.

Being close to Sierra Vista, it was time to make my annual trek down there and visit a friend who works for US parks down here.  After getting caught up on all the news, I decided to check out some new country.

We headed down through Bisbee, and then on to Douglas, where we turned north and followed highway 80 up into New Mexico, through Rodeo, Lordsburg and eventually over the continental divide to Silver City.  Bear Mountain road seemed like it might provide some good camp spots, but an evening drive up into the high country proved otherwise with everything blocked off or too rough.  Reluctantly, it was back down into Silver City where it was decided to try out Walmart hospitality.  It was surprisingly quiet, and the free wifi was available all night.  I think this was the first stop at WM this winter?  Next day, it was back over the divide just a few miles out of town, and we followed 180 north past Gila, Buckhorn, Alma, before eventually crossing back into Arizona into Alpine, which sits over 8000 feet.

While it was certainly a scenic route, I don’t think it was nearly as spectacular as the parallel route up Highway 191 on the Arizona side, which we did in 2014.  That side is perhaps slightly more intimidating with it’s complete lack of guardrails over some impressive drop offs!

Through Springerville, but with the winds becoming intense, and after checking out some alternate options, we found ourselves once again in the lee of a Walmart complex with free wifi in Show Low!  With two roughly equal distance options to get to Roosevelt Lake, our next destination, the route down through the Fort Apache reservation got the nod.  The choice was a good one, with some spectacular scenery and amazing road construction down across the Salt river canyon. 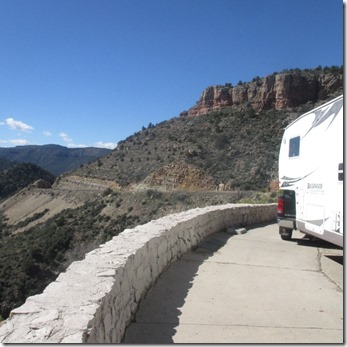 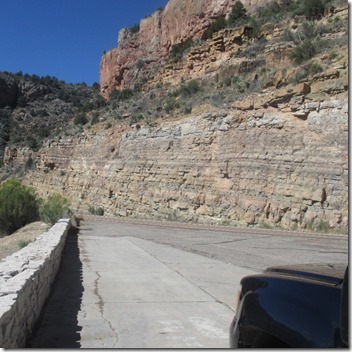 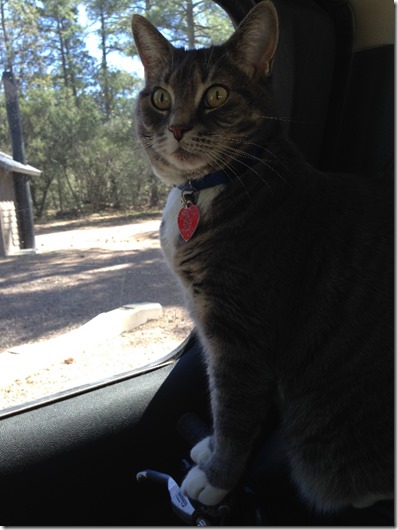 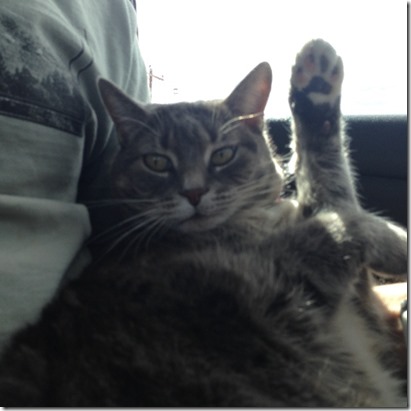 Upon reaching Roosevelt Lake in Tonto National forest, and checking out a couple other options, common sense was left on the roadside and we ended up dragging the rig into the high country overlooking Roosevelt lake.  The ‘road’ had been recently graded, but when it was too wet, so the grader ended up leaving piles of hardened mud and deep ruts.  ‘Normal folk’ unload their quads at the bottom  and ride up.  Not me; I put it in 4 wheel low and drag it on up! 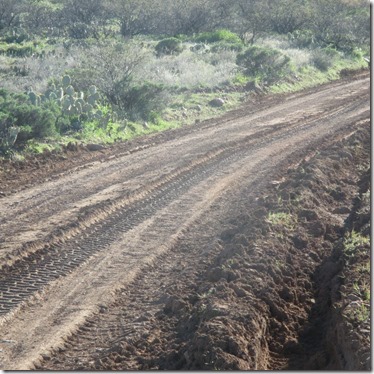 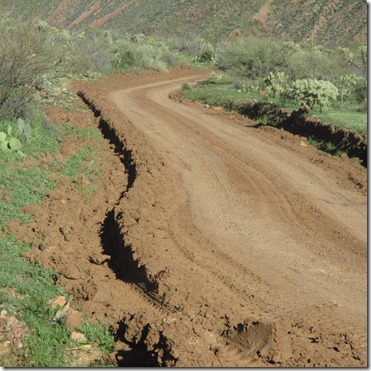 Its a nice level spot when you get there, but it’s anything but on the way up! 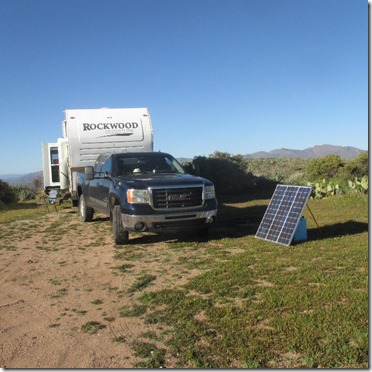 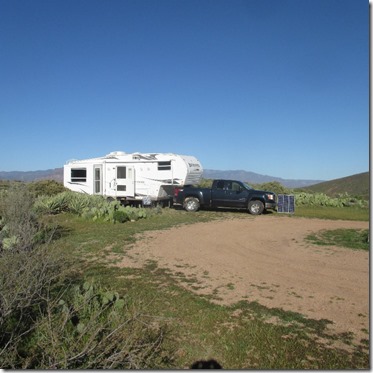 More photos here from my last visit to this spot in 2014.

When some friends from Alberta and Saskatchewan arrived, it was back down into ‘normal folks’ campground on the shore of the lake.  This would be only the second time this winter resorting to real campgrounds. Of course, several loud, cheap generators spoiled any chance of enjoying an otherwise beautiful warm calm moonlit evening.  Didn’t need much of a reminder why I rarely stay in those crowded places! 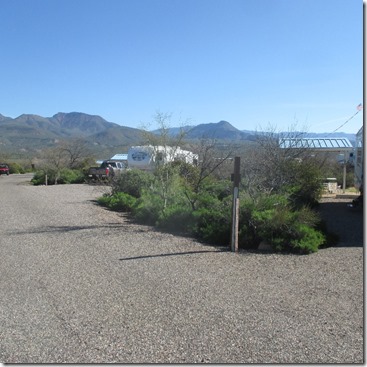 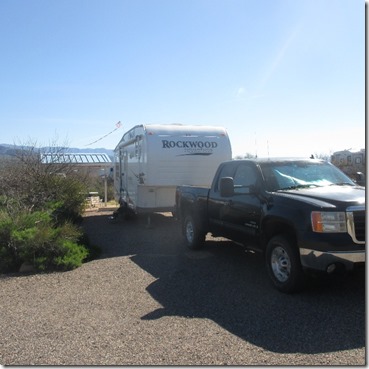 Thanks to a tip from John,  of John & Brenda’s incredible adventure, I started to check out a very new entry in the most excellent price war on the ‘unlimited data’ battlefield.  To make a long story short, I ended up with a $99. ZTE Mobley device that AT&T will supply with unlimited data for a paltry $20/month.  They are hard to find, and you have to tell the AT&T people about the plan, and dispel some of their misconceptions along the way!  It plugs into the OBD II port under the dash in your late model vehicle, but with a little ingenuity

, it can come with you in your RV, or home, or wherever.  Mine is already wherever!  So far, works great!