Around the corner on Three Wheels!

I careened off highway 14 along the Columbia River, onto the I-82 southbound across the Columbia river and into Oregon – still on three wheels! 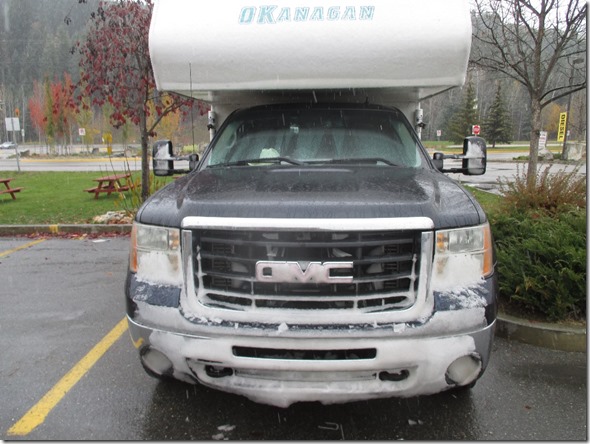 (At the Tim’s in Golden, BC after coming over Roger’s Pass in the snow)

But I’m getting ahead of myself

.  Backing up a few days, I was at home trying to get everything organized for the trip south.  Unloaded the truck camper and hooked up the 5th wheel. One of the last things was to get Hailey to the vet for her annual shots.  She has an extremely short fuse, and an incredible temper, so these things have to be done just right – to avoid bloodshed.  I thought I had ‘briefed’ the vets well enough before I whisked her in from the parking lot.  But no, it was not to be.  For some reason they wanted to give her a shot between the shoulder blades instead of the usual ‘butt’ location.  But they weren’t ready enough.  She began to growl and hiss!  They suggested ‘a towel perhaps’!!  Ha!  A towel for Hailey  - a towel would be more effective stopping a Mack truck than my cat with a bee in her bonnet.  The extreme yowling started, and the super-cat strength contortions started, so I called a halt before things got worse.  I managed to evacuate her back to the truck with only one hand bleeding – in about six places!  Last year’s certificate was still good for another 5 days – and we promise to avoid most of the rabies-infected mice and lizards we encounter this winter.

I also did a little work on the gas fireplace at home since service folks seem largely unwilling or unable to find the right parts to get it to keep burning.  A small adjustment to the thermocouple location seems to have cured it’s problem for now – as it is the backup system in case the furnace happens to quit in the next few months.

With all those things in order, and the weather cooperating, there was no excuse not to hit the road. 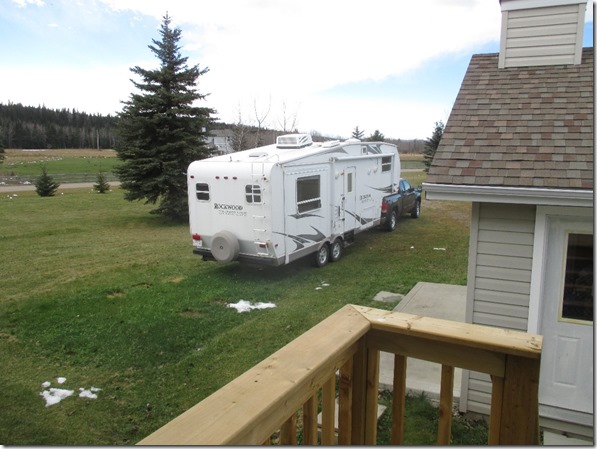 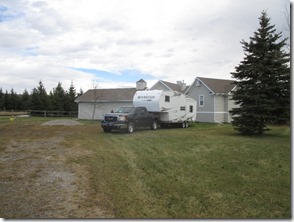 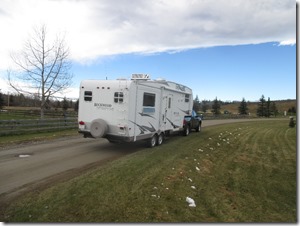 I installed the impenetrable security gate to keep the criminals (and snowplow operators) out for the winter, and we were on the road.  Yahoo!  I think we’re only a day behind the Bayfield Bunch hitting the road. 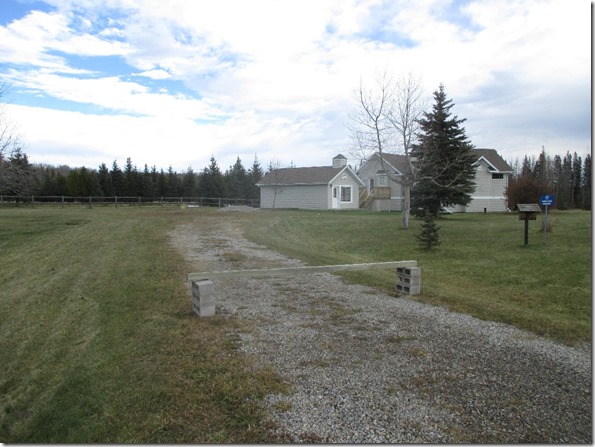 Before we hit the BC border, I had a chat with GM’s ONstar folks, and added another year’s worth of ‘minutes’ on my truck’s phone.  And I think they must have been affected by my vociferous complaints and boycott of their wi-fi data service, as they have just cut their ridiculous rate to a merely lousy level.  Since it is handy to have a variety to ways to get online, I added 4Gb/month for $35 for the next few months to my truck’s wifi. 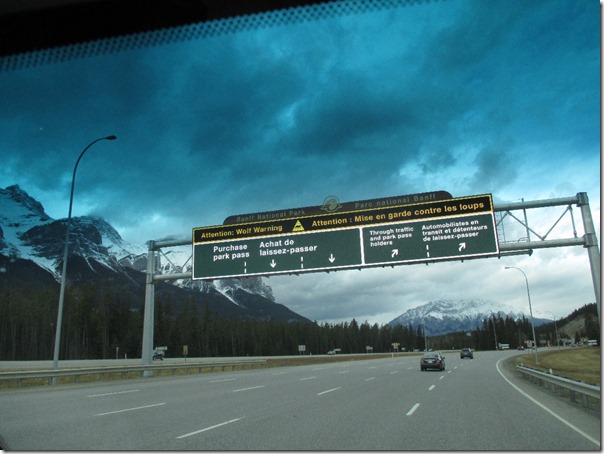 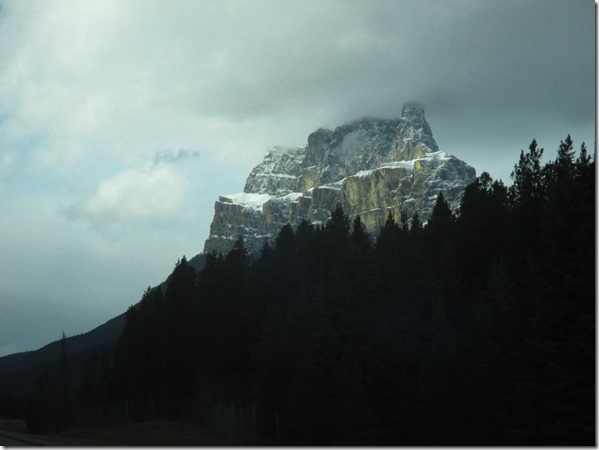 Castle Mountain (formerly Eisenhower) midway between Banff and Lake Louise.  Last time I was up there, I was flown up hanging 100’ under a helicopter for a rescue operation. 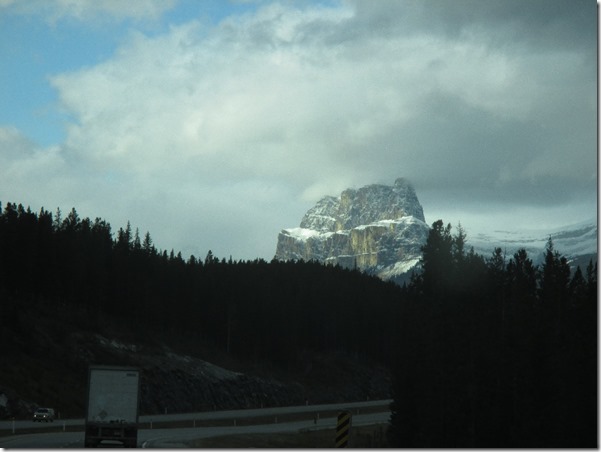 Over in BC, the Lussier hot springs were ‘supposed’ to re-open after some repairs were completed, but when I got to the turnoff, I saw that they had delayed the re-opening by a few more days than indicated by this photo I took back in September. 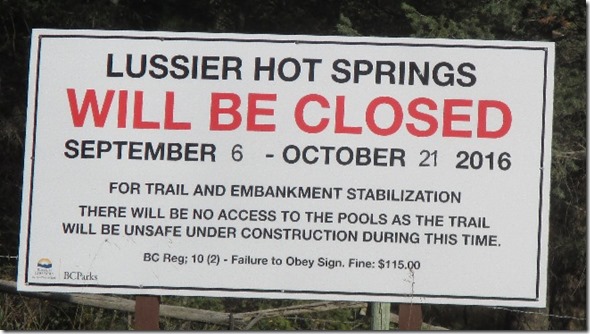 In Cranbrook, there are multiple signs in and around the Walmart parking lot indicating that overnight parking is NOT allowed!  Hmm, but right next door I didn’t see any signs in the Home Depot lot (and they have free wi-fi), so I stopped there for a while, intending to move on.  But after the store closed, it quieted right down, and the fog moved in, so we didn’t bother moving.  It was frosty at night, but the next morning we checked out the RV dump at the local Chamber of Commerce info centre and found it to be still open and operating.  Didn’t need to dump, of course, but after ‘winterizing’ earlier in the fall, I wanted a partial load of water to flush things out without making it too tough to take corners on three wheels!

We ran the border south of town, and was glad to see that Trump hadn’t built much of a wall yet – but there was some construction happening there.  Hailey didn’t get interrogated, so we made it through unscathed, and were on our way down to Coeur d’Alene, Idaho for some cheaper fuel before doing the run through Washington state.  Weather was mostly overcast, with some showers, but gradually starting to warm up as we moved further south.

Caught 395 south and called for a break in Kennewick where I tried to get back into the usual travel routine – which involves a walk-around and a quick feel and look at all the tires and hitch.  Hmm, one front wheel on the trailer felt warmer than all the rest.  I suspected that with the bit of city driving and braking that perhaps that brake was working a little harder than the others.  We continued on south with the brake controller backed right off, and headed west along the north shore of the Columbia river, thinking about checking out a possibly closed county park along the river.  Almost burned my finger tips on the brake drum this time with no braking involved, so I knew things were not right.  We pulled in to Crow Butte park – which is actually on an island in the Columbia River.  But instead of being a closed or almost abandoned site, it turned out to be a very nice, well cared for and obviously popular weekend spot as it was half full.  We had to break out the wallet, and pay the astronomical price of $17. if we ‘promised’ not to use the hookups!  I was not in the position to argue or drive further with my hot wheel, so there we were for the night.  There goes my camping budget for this winter! 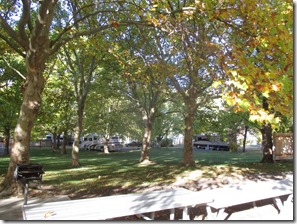 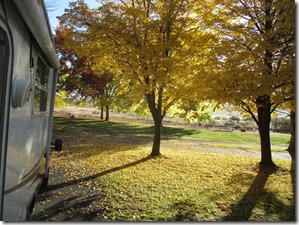 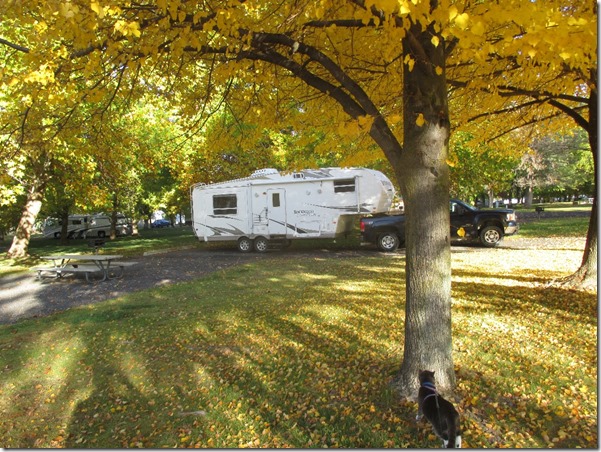 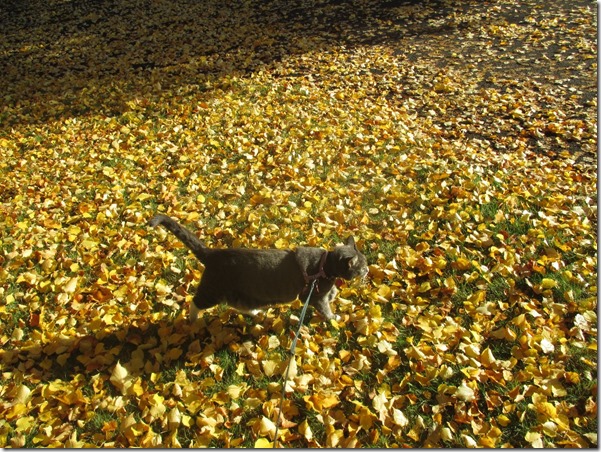 .  Of course, there were no service options for miles in any direction and there was not even any available internet to search with.  I could have set up my internet dish, but it was easier to head down the road in the truck till communications were established.  Made quite a few calls before settling on the Les Schwab place across the line down in Hermiston, Or.

So back to pick up the rig and haul it some 35 miles down the highway and interstate – all at slow speed on three wheels!  But first, all the fresh water was drained and a quick stop at the dump station to empty even the small volume in the grey tank to minimize weight as much as possible. 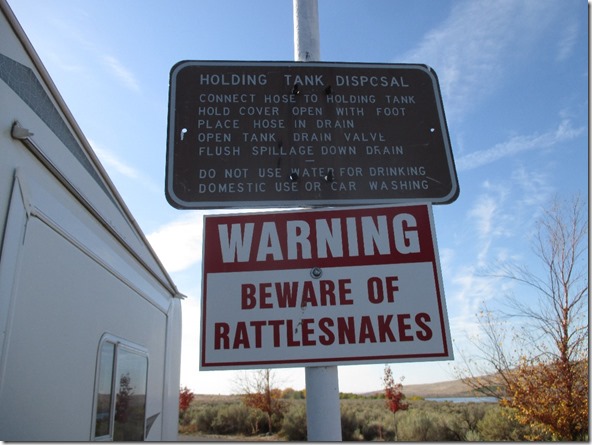 So we then drove all the way across the state line and the Columbia on three wheels.  What were you thinking?  Lots of ‘roadkill’ onions and potatoes along the road as the farms here are in full harvest mode with lots of trucks hauling. The guys at Les Schwab did a quick and efficient job of replacing the wheel bearing.  It was evident that if I had not noticed it in time, it would have thrashed the axle, if not losing the wheel somewhere along the road.  Had to replace the other axle that way a few years back, so I’ve tried this both ways!  I recommend checking wheels as soon as you stop – every time! 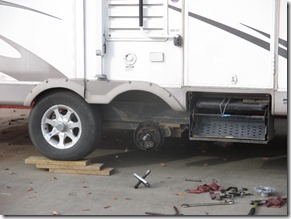 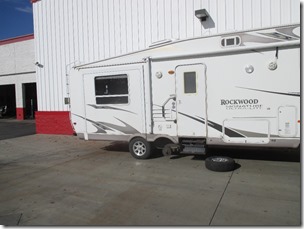 For some reason the folks at the tire shop had no interest at all in looking at my fridge – which has started to act up for the first time in 8 years or so!  But that’ll have to be the subject of another post.

Sounds like Al from the Bayfield Bunch is a bit under the weather in Pennsylvania.  Hope he and the ‘Bunch’ are feeling better soon and get those big wheels rolling again!