Back on the Air!


So … I just noticed that all the posts I have put online since late April have just disappeared into thin air.  Or cyberspace.  And if you believe that I’ve actually made some blog updates since April, I have some beautiful Alberta ocean-front property to sell you as well

In the last post, I had been working at the Air Tanker Base for a few days before opening up my regular fire base camp.  Well, it has been a busy time, and I have not been in camp that much at all it seems.  I had to make a run up to one of our mountain top fire lookouts … 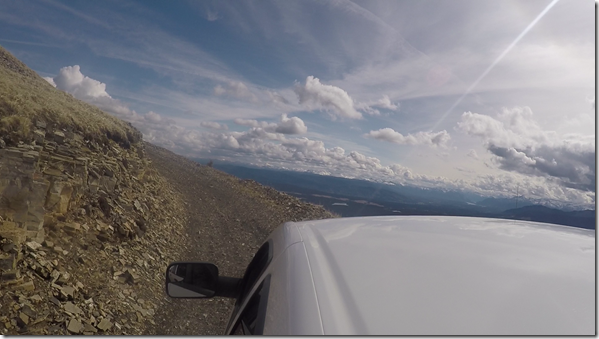 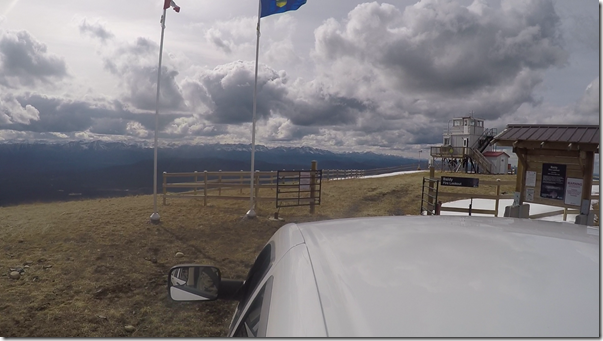 Then I spent a couple of days driving all over the backroads, posting and updating signs for the province-wide fire and atv ban as a result of the extreme fire hazard and the blaze that had just begun up at Fort McMurray.  I also had to haul a load of helicopter fuel to one of our remote outlying bases. 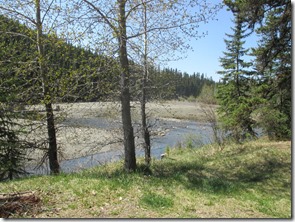 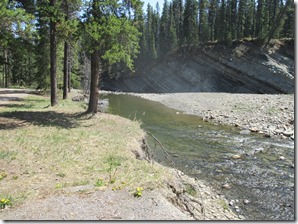 Then, Hailey and I got called to spend a few days watching for smoke in that same lookout.
This time the road was blocked by a fallen tree.  After trying to beat the log into submission with the dull axe found in the truck, I eventually had to winch it out of the way. 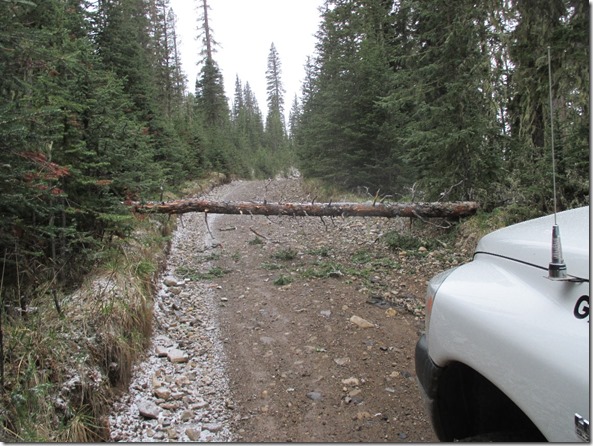 The weather was not as good this time on the way up the mountain. 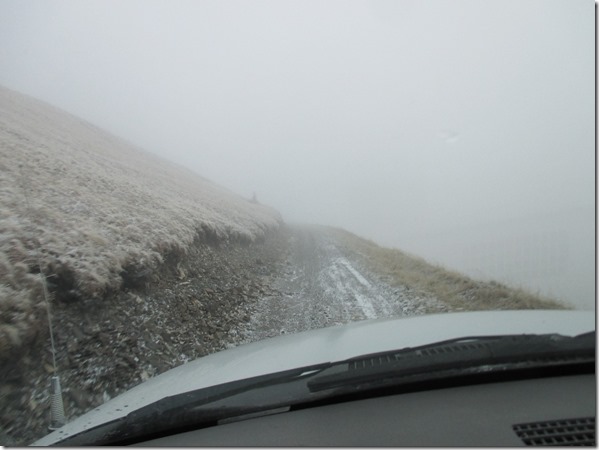 At least there were no fires visible at the time! 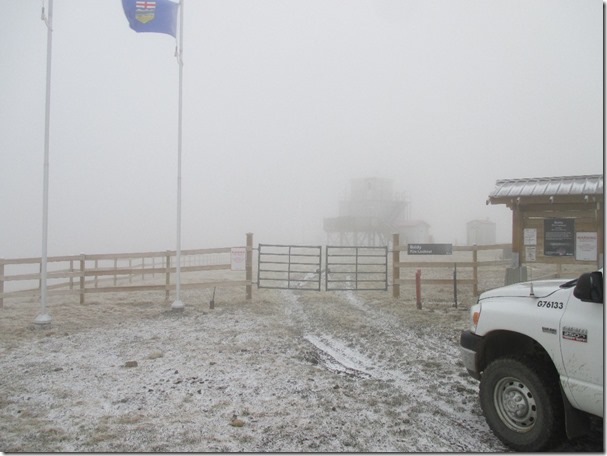 Later in the day the weather smartened up and Hailey and I settled in to the routine for a bit. 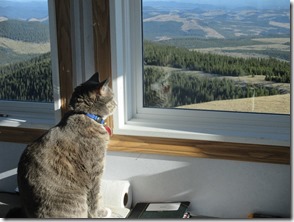 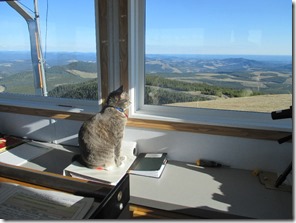 She watched for fires and Hoary Marmots until she just needed a rest. 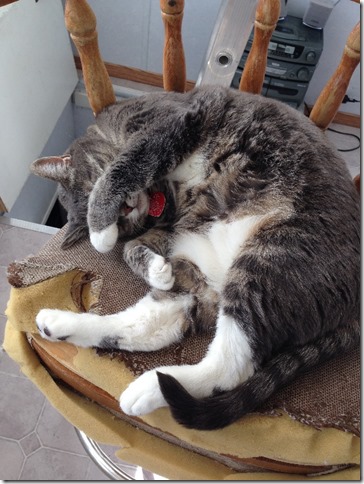 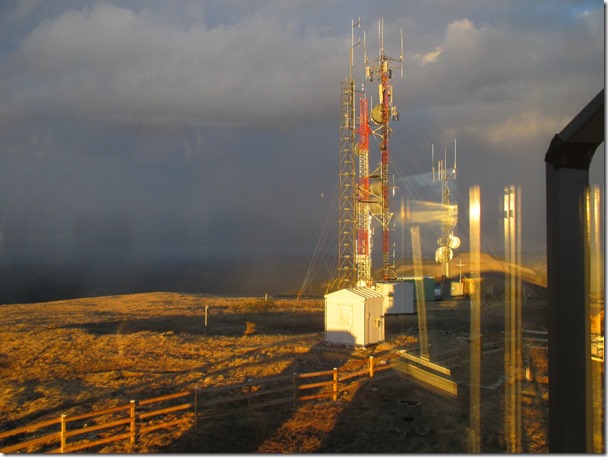 It was still chilly outside, so many of the photos are taken through the windows, thus the nasty reflections. We heard about a few smokes in the area, so Hailey assisted in pinpointing them on the map. 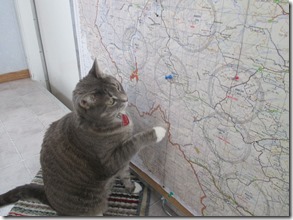 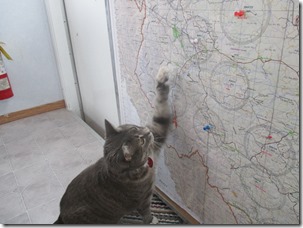 Eventually, she tired of that as well. 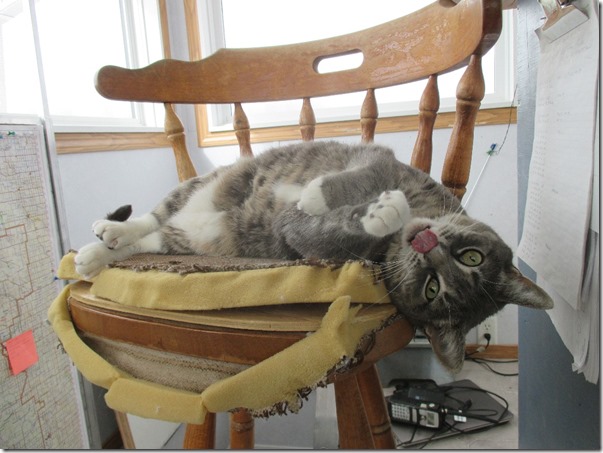 A nice coating of frost covered everything in the morning. 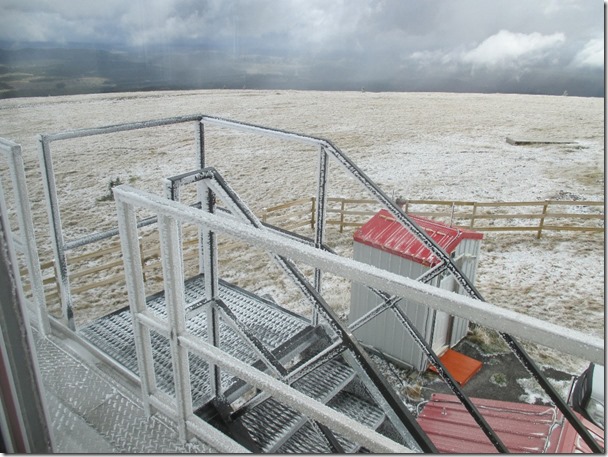 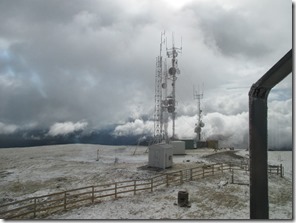 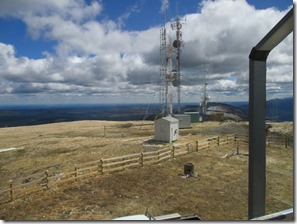 After that, it was back to the tanker base again for a few days.
The big fire up at Ft McMurray was all over the news, including the evacuation of 80-90,000 people under some pretty scary conditions.  A provincial state of emergency was declared and media around the world became interested in the story, and even the Queen commented on it.  For the first several weeks, it was rather chaotic with extreme fire behaviour where any fire fighting efforts were simply to try to protect the city and other facilities.  But essentially the fire just did whatever it wanted in spite of the best efforts of dozers, bombers and fire fighters.  Eventually, the weather cooperated a bit, the fire cooled down and it was time to ramp up the efforts to get it controlled.
A great number of staff from our local area were already sent north to assist, when the call came for me as well.  I was keen to go up and have a look and assist, but worried about leaving Hailey behind, though I had arranged for various friends and neighbours to make regular checks on her.  The day I headed north was a rather wintery one.
I had to make a quick stop at camp to pick up some gear … The crews in camp were kept busy shoveling snow off the decks and walkways!  And for the first while, the roads were covered in snow and slush. 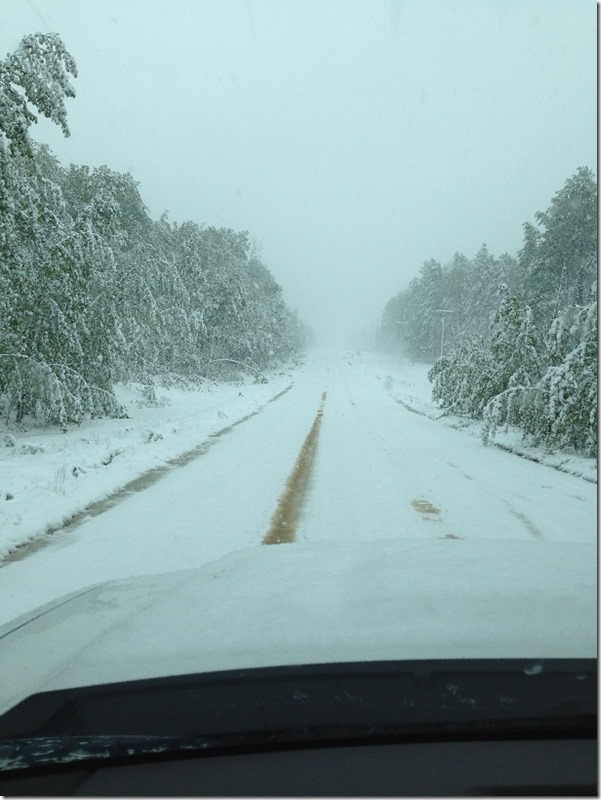 Next post:  My time in the BIG fire camp at Fort McMurray
at 5:44 pm