Barely hanging on – in Sedona!

It was a tough decision – deciding where to go when we left Mittry Lake, just north of Yuma.

After quite a while in the area, visiting relatives, getting a few things from UPS and Fed-Ex, and enjoying lake front living under the palm trees, it was time to move on.  Plus, we were pushing our 10 day limit at Mittry Lake – though this did not seem to bother a lot of others who were hogging prime waterfront spots for weeks.  BLM rangers would drive by, but I saw no sign of enforcement.

At any rate, we soon found ourselves on the road north, and back to one of our favourite spots, just on the edge of the Kofa National Wildlife Refuge.  It was a new spot, but not far from the spot when in the area for the big RV extravaganza in Quartzsite in January. 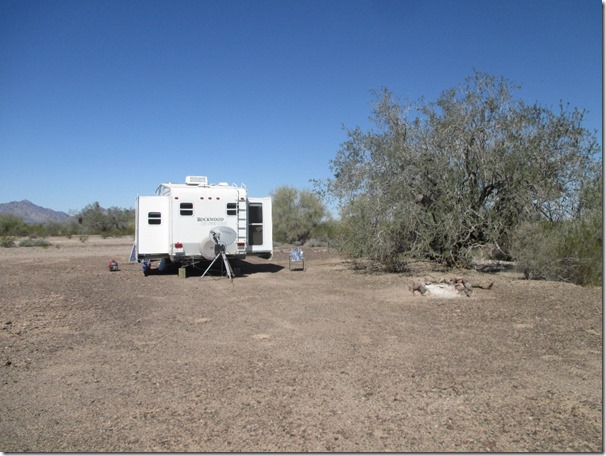 The hummingbird feeder soon attracted a following, the sun was out, and preparations were made to settle in for a bit. 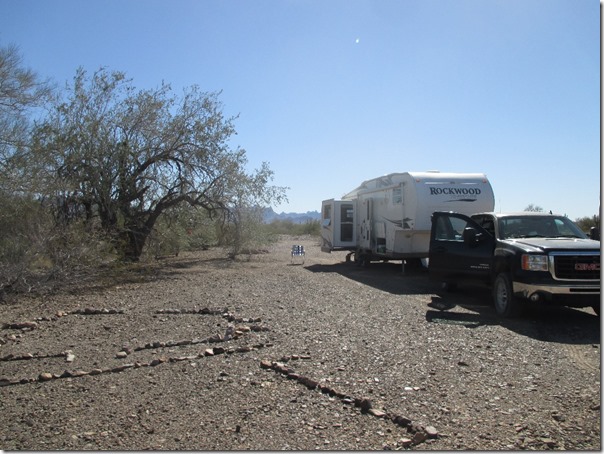 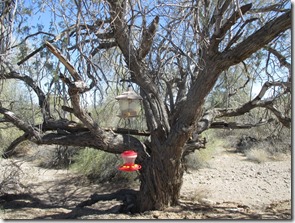 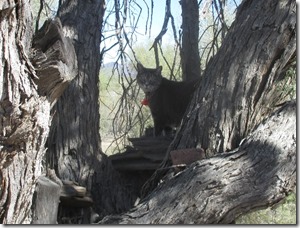 Alas, it was not to be as I learned that my sister was in the Phoenix area, after bringing down a load of horses from Canada.  So once again we packed up and moved back over to the Saddle Mountain area near Tonopah.  She soon showed up with her horse trailer/camper and we got to spend a couple of days getting caught up . 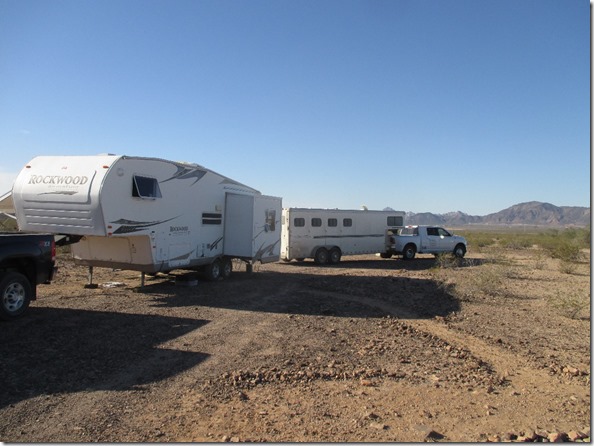 Then, she blasted off early one morning with horses heading back to Canada, so we were free to move on again.  While she was there, we did get a visit from two BLM rangers – at the same time – who were checking out conditions and campers in the area.

I checked the map and found a new road (for me) heading north, that joined up with the Vulture Mine Road, eventually ending up in Wickenburg.  It was a good way to avoid the interstate traffic, and after a couple of quick stops in Wickenburg, we found ourselves heading down Ghost Town road in Congress.  Sure enough Al and Kelly of the Bayfield Bunch were out in their front yard, and we exchanged waves as I carried on by to the BLM area just a bit further down the road.

In the morning, I stopped by and had a good chat with Al in the backyard, surrounded by happy chirping birds, and of course Pheebe!  Believe it or not, neither one of us had a camera, so you’ll just have to take my word for it!

It was still plenty warm, so later in the day were were hooked up and headed up the Yarnell hill on the way up to Prescott. We stopped at a roadside pulloff up in the pines to have some lunch and enjoy the views. 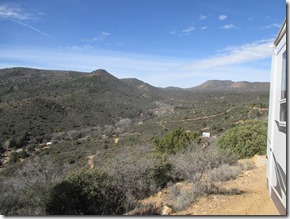 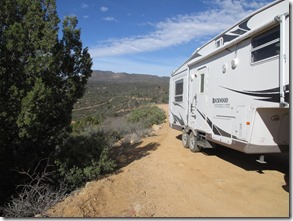 It would have been tempting to spend the night there if it had been evening, but it wasn’t so on we went into Prescott and Prescott Valley.  With the days getting longer, there was still time to head in the direction of Cottonwood and Sedona.

I found a small campsite called Powell Springs on the map on another short-cut route across to Cottonwood, so that is where we headed.  Much to my surprise, the road was paved all the way, though winding and steep in places.  The campsite was a quaint little forestry campsite from the past, that was certainly not designed for RV’s of any size.  Come to think of it most of the half dozen sites looked pretty slanted for even tents.  But we managed to squeeze into a gently sloping spot among the pines without damaging too many trees with the A/C or the door handles!  It was a pleasant change to be in the tall ponderosa pines after so much time in the desert – and palm trees. 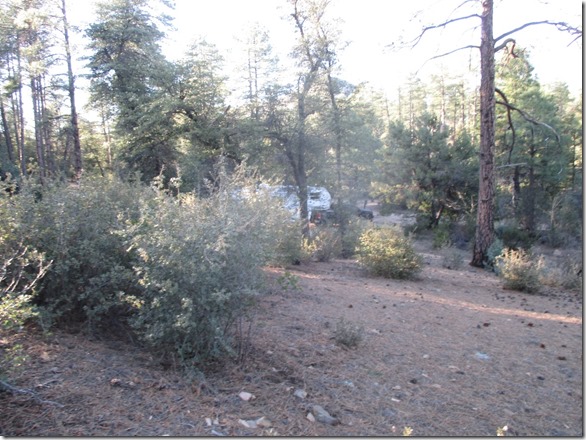 Next day, a bit further down the road towards the collection of houses called Cherry, Az we saw some quite adequate overnight spots right close to the road – so they will be our preferred option next time through here.

The pavement ended at Cherry, and care had to be taken in a few spots to avoid damaging low-hanging branches with the A/C unit again

There were a couple of tiny spots just off the road that would have been awesome camps for a day or two with the truck camper, but try as I might, I could not jam the trailer backwards up the hills and around the corners over big rocks.  So as an alternative, it seemed like a good time to get out the helicopter and see what the view was like from above! Cottonwood is off to the left, just out of sight. 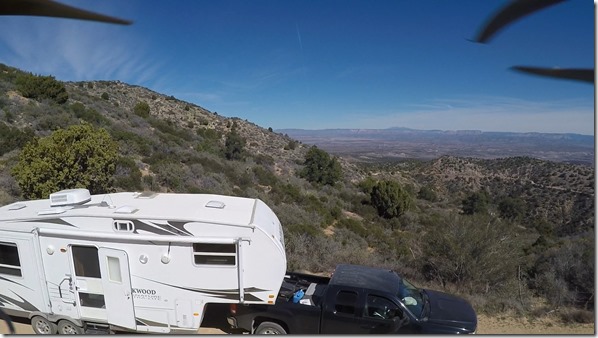 And here is the road that we follwed the rest of the way down out of the high country! 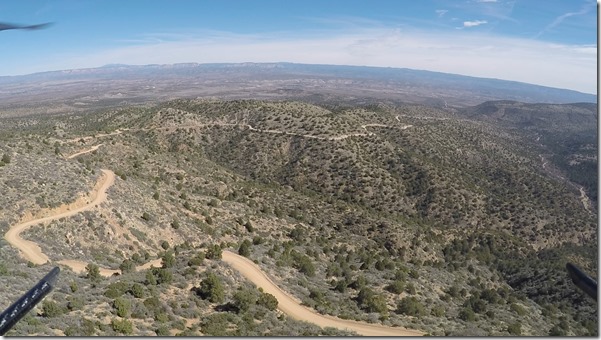 Sedona, and some hiking was now in our sights.  Our ‘usual’ spot off of forest road 525 was somewhat blocked by new rocks

blocking old camp spots, but we made do with a nearby location. 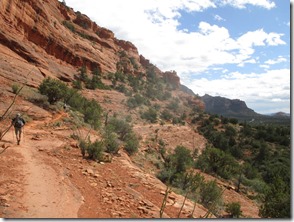 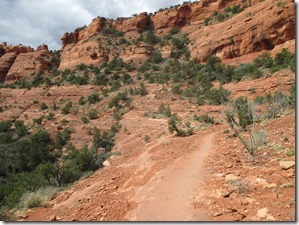 As usual, some great hikes were enjoyed with friends Ed & Marie and their two great retrievers. 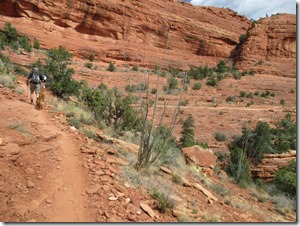 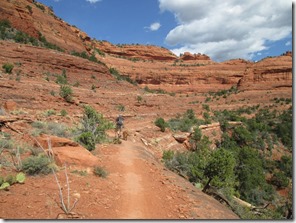 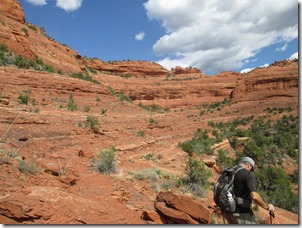 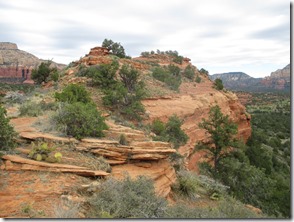 As always, the Sedona scenery is stunning. 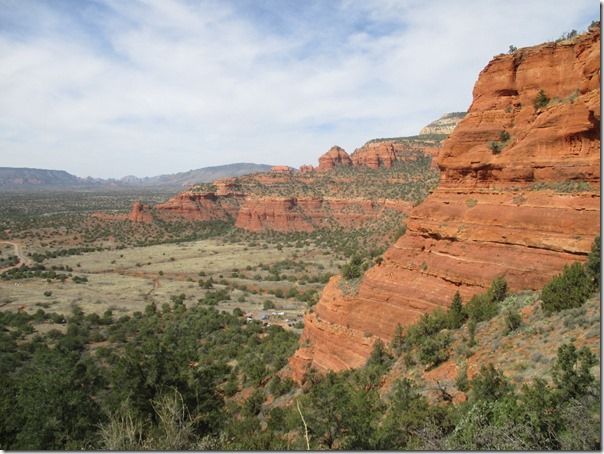 They convinced my to take up rock climbing again – but then left me – barely hanging on!

And, I’d forgotten my parachute too! 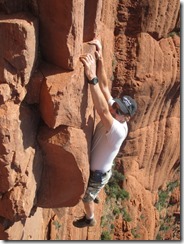 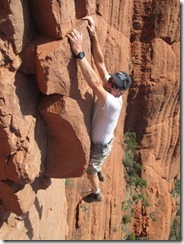 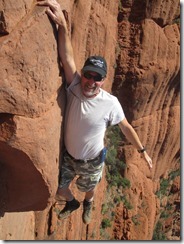 After crashing through all the bush of late, the rig is starting to look a bit different … 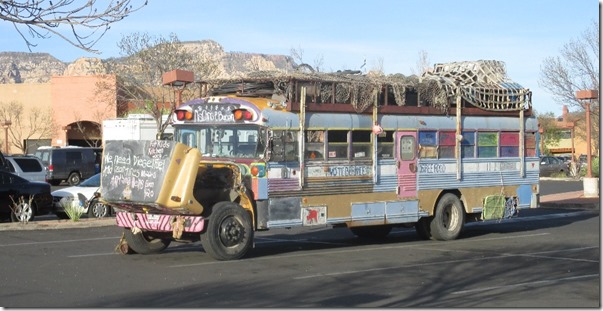 And I missed this photo of a ‘Diesel Pusher’ from back in Quartzsite earlier …! 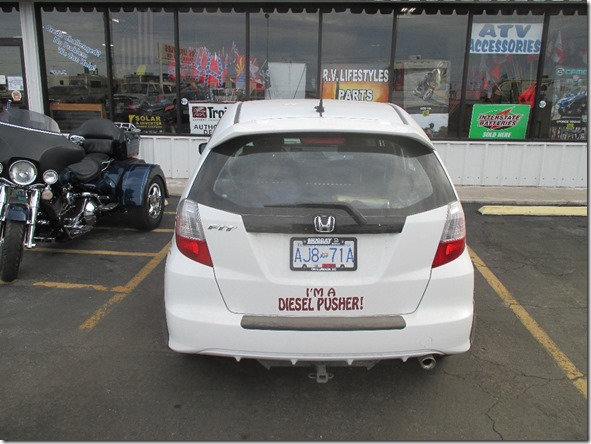 I’ve got some more photos to post, but this blog is getting a bit long, so I’ll save them for next month.  I mean, next Blog post!

Public Service Announcement:  If there are any emergency power outages in the southern Arizona area, just call Nina and Paul from Wheeling It .  With the fancy new solar upgrade to their rig they will have enough power to keep a medium sized city energized for a spell!