Well, here goes the test to see if Live Writer will publish on Blogger – for me.  Everyone seems to have been having problems with it, but I haven’t attempted to post since issues began to show up.

Nope.  It didn't work for me either.  Cut and pasted it into Blogger, then had to find and re-load all the photos.  Too much hassle.  Won't likely be blogging again unless they get this problem fixed :-(

But first, going back a week or two, to the area north west of Barstow at Harper Lake where all the new solar power installations are …  Just stumbled on to the photos I’d forgotten about..
To begin with, I have to say that I am totally in favour of ‘green’ energy sources such as solar, but what I lot of people may not know is that these large installations can have a lot of negative environmental effects as well.  I really prefer the standard photovoltaic panels that can be mounted on rooftops, or backyards, or RV’s (!) that have negligible effects on surroundings, other than creating shade and perhaps appearance issues.  In fact, for about 10 months a year, I live in my RV and my only source of power is one solar panel.  My generator gathers dust, and I’m almost never plugged in to shore power.  The sun is powering my computer and satellite system as we speak! 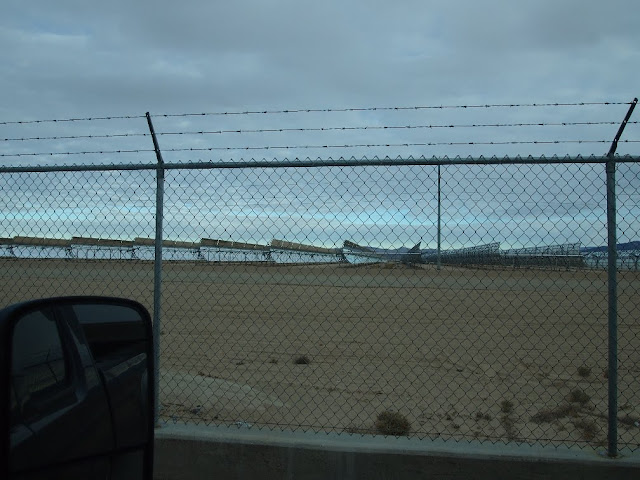 Unfortunately, other types of solar are deemed more efficient or cost effective than photovoltaic panels for large commercial applications.  One of these consists of thousands of mirrors that all concentrate the suns rays on a single tower in a central area.  These can kill any birds that fly near the focus point.  Another type consists of rows of reflectors that heat oil in a tube that runs through the system – to eventually create steam and power.  That is the type that have been constructed in this area.  Unfortunately, to install these systems, thousands and thousands of acres of desert (endangered tortoise habitat) is bulldozed clear of any vegetation, and graded perfectly flat.  I’m not sure why this is required, other than to facilitate access for maintenance.  In addition, the sites I observed were completely surrounded by fencing, so that not a hare, tortoise, deer, or coyote could access the area any longer!  Even 24hr security patrols were in effect, lest a rabbit breach the perimeter? 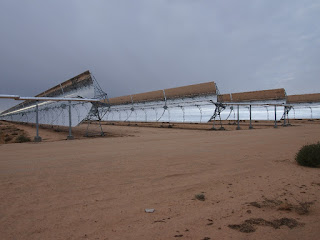 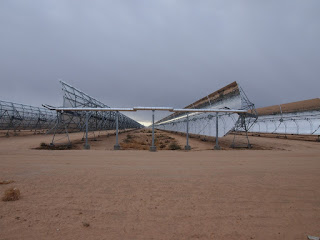 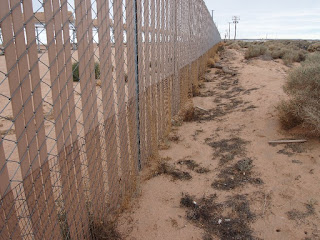 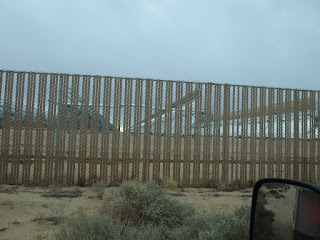 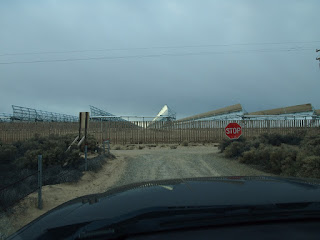 When I visited the area several years ago, before hardly any infrastructure had been built, I saw crews hard at work putting up short little fencing along the access road – designed I assume to keep tortoises from getting killed on the road, and no doubt one of the mitigation measures to allow destruction of so much of their habitat.  Unfortunately, much of that fence has now fallen into disrepair and there appears to be no ongoing maintenance.
I did find a couple of these structures, which I can only assume are designed to let a tortoise cross the road safely. 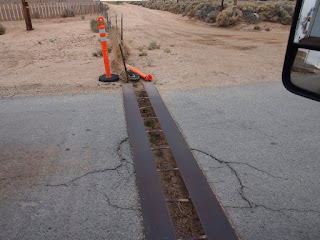 That’s all I have to say about that!
Meanwhile back at Borrego Springs, camping in the desert has been swell, complete with coyotes, hares, and a couple days of wind. 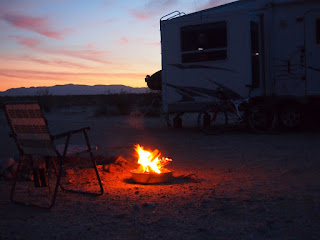 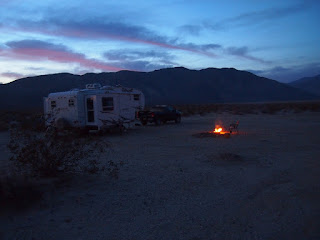 Nothing much to write about, and I’ve taken lots of photos of it in the past.  There are occasional visits from military aircraft, including these helicopters, and a few Osprey whose large tilting blades allow them to take off like a helicopter, but fly like a regular fixed wing. 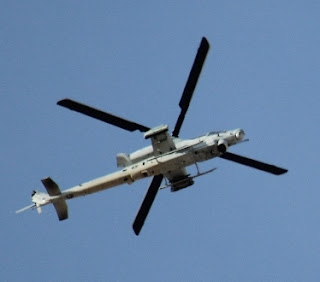 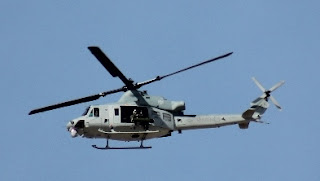 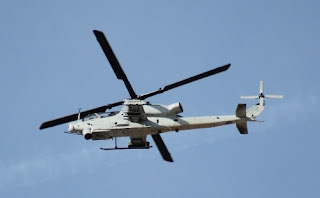 In spite of Anza-Borrego Desert State Park taking over control of some previously private lands that boondockers utilized, in my opinion the results have not been as bad as I previously thought.  Although it has significantly reduced the areas open to random camping in the Rockhouse Rd area, neither the remaining open area close to the highway nor the Peg leg area were crowded at all.  Not needing cell service, I went a bit further up Rockhouse past the newly restricted area, and found ample space all to myself with no one camped within a mile most of the time.  After a week of work with my magnet, my  collection of rusty nails, screws, staples, as well as broken glass from the immediate area has now reached an estimated 8 or 10 pounds!
Watched some interesting film action down on the lake a few days ago.  I don’t know if it was for a movie or a commercial or what.  The scene they were shooting involved a young lady, initially dressed head to foot in a long dark, hooded robe.  She would begin running across the dry lake bed with the cameraman running backwards or beside her with his steady-cam.  She would then, while still running, rip off the robe and throw it away, followed by a dark long-sleeved top, leaving only a dark bikini covered with sparkles that would glint in the sun.  There were many ‘takes’ of the same scene with the camera taking a different angle each time.  Sorry, it was a ‘way’ too far distant for any photos!  Let me know if anyone sees a commercial or a movie scene that looks like that!
Since I was not totally confident that I was not in the newly ‘restricted’ camping area with the new rules, I picked up a new legal ‘fire pan’. 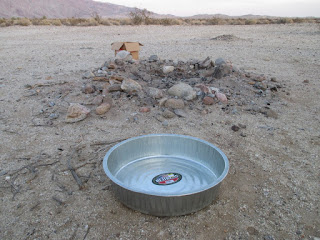 Drove into town on one of the windy days, and at times the road was almost obscured by blowing sand.  Of course, the camera was not ready for the best shots.  Interestingly, as this shot of the mirror shows, behind the truck, the accumulated sand on the road went swirling off much like snow. 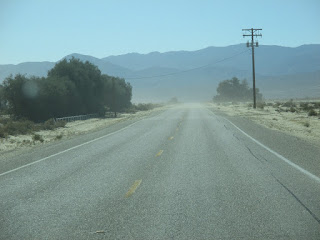 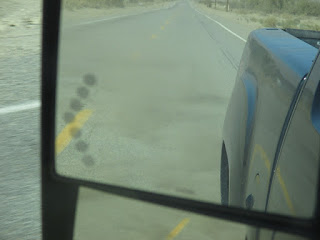 Speaking of cold …  here’s a shot of my indoor thermometer, during the day with all the windows open. 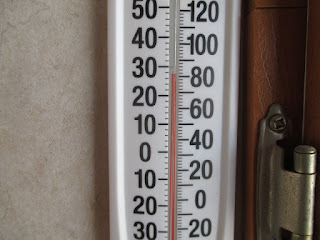 Meanwhile, back near Lake Louise, Ab it looks like a nice day – but a bit on the chilly side.

Sorry for all the poor editing - you can thank blogger for that.