Too soon to head South!

With work done (at least for this year), and still a bit early to head south for the winter, there was only one viable option.  A roadtrip!  But to where?  Out came the maps and Google Earth.  East? West? North?  After the little snow flurries at camp, I didn’t think it made much sense to head north and likely find more of the same.  That left east or west …

But as usual, I headed out with no real plan in mind.  I started out a bit to the south, but plans to meet up with friends in Calgary or further south did not work out, but at least I got to check out the new Bass Pro Shops at the Cross Iron Mills.  The thought of hot springs then came to mind, and since there are not many (any?) in Saskatchewan, before I knew it the truck had turned towards BC.  Weather was cooling off before departure and in a rare pre-emptive strike, I got busy one day and winterized both the fifth wheel and the truck camper!  As luck and poor planning would have it, the very next day I loaded up the truck camper, and watered it up for the trip.  We made the big pull over Roger’s Pass without the big diesel even downshifting, and visited a friend for the night in Revelstoke.  Diesel prices in Calgary had been 88.9/L, and Revelstoke was 115.9/L, so we upped the fuel economy and found cheaper prices in Kamloops.  Missed meeting up with some friends in Kamloops as I passed through, and took the less-traveled route towards Merritt.  By that time, it seemed like it might be a good plan to push on and get through the downtown Vancouver traffic on a Sunday afternoon, BUT a convenient, scenic little lake side spot scuttled that plan.  Weather was doing it’s best to be damp and raining, but that’s not much of a concern in a cozy camper.  It was just getting dark, when I noticed Hailey intently staring out the back window.  Sure enough, there was a very small black bear out there, feasting on the berries in the bushes! 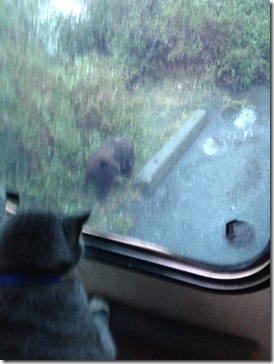 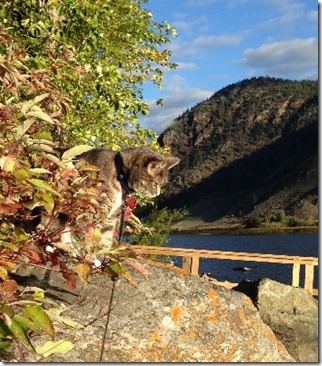 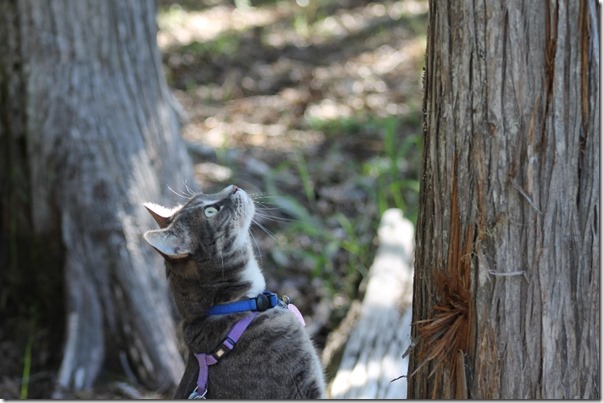 Unlike the 5th wheel that has a shower on board and an ample supply of water, the truck camper does not, so we are always on the lookout for a convenient place to shower.  We stumbled onto a very nice aquatic centre in Hope, and had a sauna and a hot tub to round out the deal.

We paid a surprise visit to that elusive, stealthy Wandering Willy on our approach to Vancouver, which put us right in the middle of rush hour to get through the city!  Luckily, there were few delays in the direction I was headed, but there appeared to be several multiple mile long backups in the opposite direction.  We kept right on going onto the Sea to Sky highway, all the way right up to Squamish. 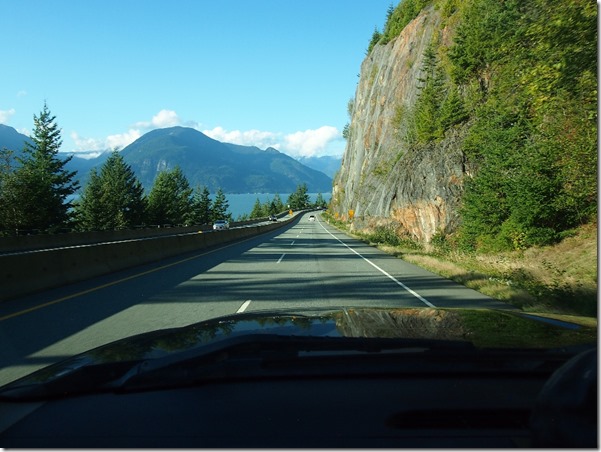 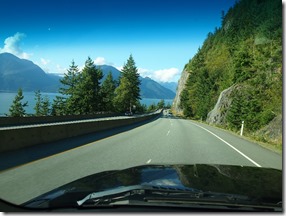 Hailey says it is about time we got on the road again.  Enough with all those darn helicopters! 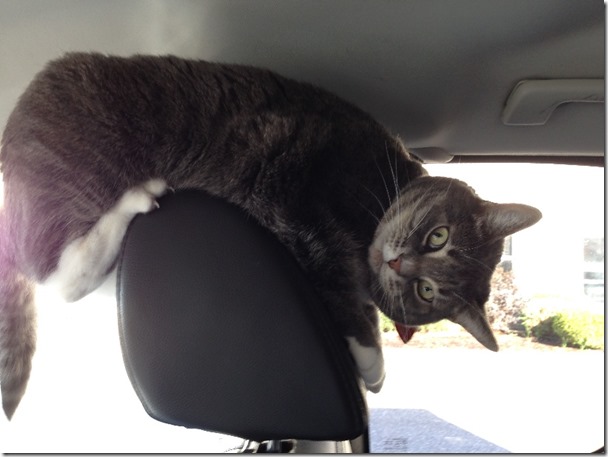 After visiting with friends for the night in the Squamish area, and checking out their new sailboat, it was time to hit the road again.  But then a Facebook friend who lives in the area, whom I haven’t seen in years noticed I was in the area, and called me up for a short get-together.  I think what I need is an app linked to Google Earth that plots everyone’s address from my address book on google earth or google maps, so I always know who lives in the area I’m traveling.  That way, I would not miss as many friends or get reminded later who I should have visited!

Anyway, that still left a bit of time for a short hike up the bottom of the Squamish Chief, which incidentally is more very steep stairs than anything else.  That got the lazy legs humming a bit.

We retraced our route back down the Sea to Sky and got us on a ferry boat at Horseshoe Bay and headed across Howe Sound to Langdale and Gibson’s – home of the long, long running Beachcombers TV Series.   Did another short, steep hike there up Soames hill, for a nice view of the harbour, and rewarded my efforts with some ribs and beer at Grandma’s Pub – right across the road from Molly’s Reach (from the TV show). 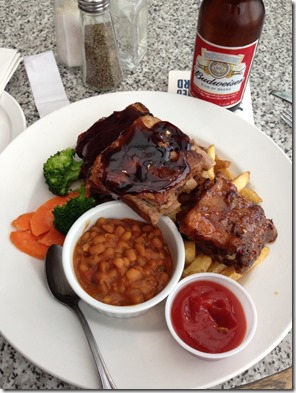 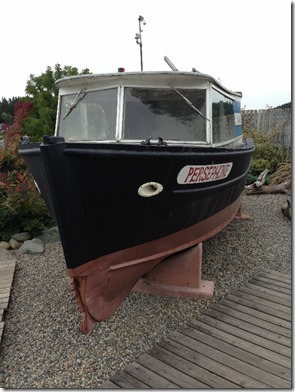 On the way back to the truck, we found the Persephone on blocks by the street.  Lots of boats to check out at the docks 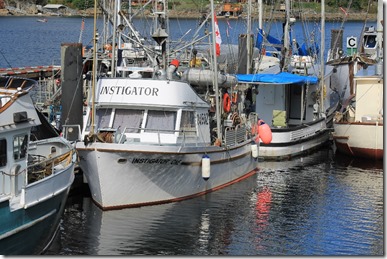 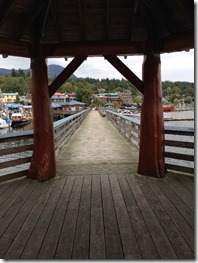 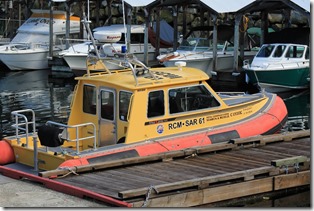 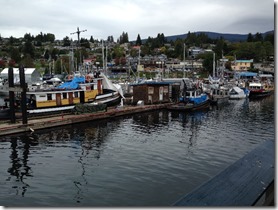 And another hike down to Smuggler Cove Provincial Park – where rum running boats used to hide out during prohibition while delivering to the US! 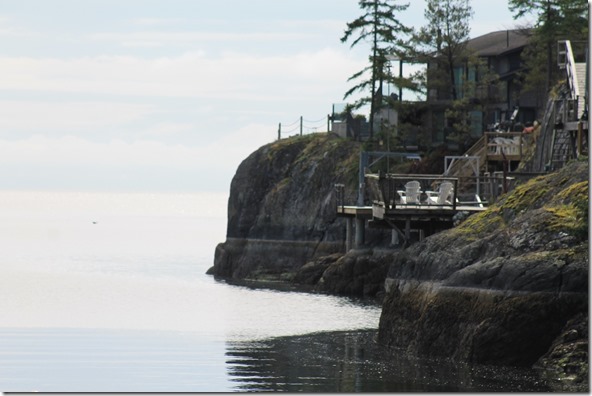 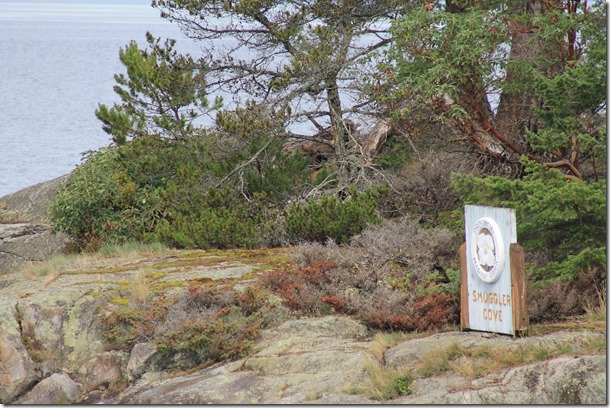 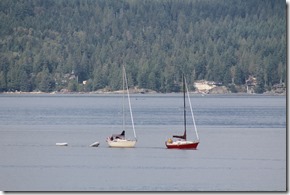 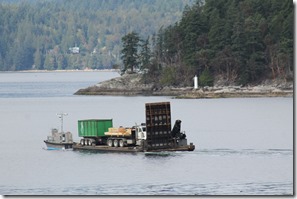 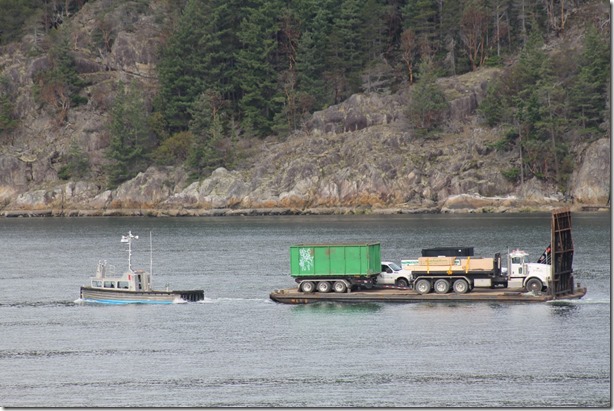 After a few days on the road, the rains let up and the ‘Sunshine Coast’ lived up to it’s name.  We were usually able to locate remote, scenic, free spots to camp along the coast, but it would have been very difficult to do the same towing the 5th wheel.  We picked up some small grocery items in Sechelt, and found yet another great rec centre with pool and hot tub – on special at $2.!

As we continued northward along the coast, there was yet another ferry to get us across Jervis Inlet.  But first – Egmont, and the famous tides of the Skookumchuck Narrows!